Here are my fave hotels and other sleeps of 2008 – in no particular order:

In January, we spent an entire week in the same place. That’s pretty rare, as I get restless after a few days. This hotel was a boat, though, the M/S Helio, cruising along the Nile. 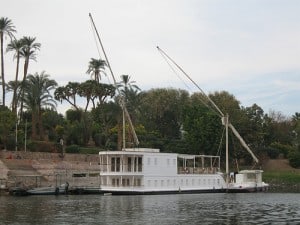 In the Former Yugoslav Republic of Macedonia – oh, what the hell, let me be politically incorrect and call it Macedonia – I stayed one night at the Stone Bridge Hotel in Skopje. The hotel was nice; the main draw being its location right by – you guessed it – Skopje’s very cool, 6th century Stone Bridge and only metres from the old bazaar and the old fort. 5500 MKD (ca 90 EUR/125 USD)

Going to Moldova, Alex and I spent a night in Latvia as the outbound flights didn’t connect on the same day. We stayed at Homestay Riga, a great rambling guest house a bit out of town, run by stained glass artist Diga Daga and her Kiwi husband Ric. Good price as well – for LVL 40 (ca 55 EUR/80 USD) we got separate bedrooms, large ones – and a huge breakfast. And the best atmosphere!

Our most interesting overnight in 2008 was spent in a private flat belonging to a lovely woman named Lubov in Tiraspol, capital of the internationally unrecognized state of Transdniestr, where the Soviet Union is still alive and kicking. It was weird and wonderful to go “home” to a Soviet block-of-flats, watching children play and old women knit outdoors in the late afternoon sunshine. Arranged through Marisha, it cost 30 EUR for the two of us.

When planning our summer holidays in Wales and England, T’yn Rhos Country House near Caernarvon showed up on a web search. As I foolishly planned to see heaps, I booked only one night. When Cat saw our room, she immediately demanded a long stay. We ended up staying 3 nights in this charming house in Northern Wales. At GBP 110 pr night (for the three of us), it was a bit of a splurge.

In mysterious Hay-on-Wye, we had a huge 2-bedroom apartment all to ourselves for GBP 90, including breakfast and free use of the pool (!) at the B&B Seven Stars. A big plus: the owners didn’t bother with incessant talking during breakfast.

On the Salisbury Plain, we stayed two nights at The George, a 13th century pilgrims hostelry in the centre of Amesbury. Today, it’s a large, somewhat rowdy hotel. Birthday celebrations in the bar downstairs kept us awake through most of a Saturday night. But we had a good sleep after a 5 a.m. visit inside the stone circle at Stonehenge, only a few minutes drive away. And GBP 60 pr night for a very large room wasn’t too bad.

In Republika Srpska, I stayed at Hotel Viv in the centre of Trebinje. Nice, clean room, helpful staff – a good deal for 30 EUR. Most memorable experience: After a look at early morning Trebinje from my balcony, I walked back into my room, only to discover a young naked man asleep on my bed. A dream, you say? Not so. Trouble was, the bed had moved to the other side of the room. Turns out the balcony was shared, and he obviously didn’t mind sleeping with his door open. Partly afraid of getting caught staring at this gorgeous creature, partly curious, I stood there a good minute before I had the decency to get out.

On fairy-tale Prince Edward Island in Canada, we stayed two nights at Fitzroy Hall, a Lonely Planet recommended B & B in the sweet little capital Charlottetown. It was a beautifully restored Victorian townhouse, but pricey at a 202 CAD pr night (tax incl.) Breakfast was delicious, with fresh blueberries; drawback: it’s was a bit difficult getting away.

Less personal, but at half the price, the large, beautiful Loyalist Country Inn in Summerside (also on PEI) was a better deal. Plus for the large swimming pool, a life-saver when travelling with children.

Our favourite stay in Canada during the autumn break, was Spinnaker Inn in UNESCO-listed Lunenburg, Nova Scotia. For 140 CAD (tax incl.), we got a split-level suite with excellent views of charming Lunenburg harbour. Plus for the extra large upstairs bed, super-plus for the very large bath oom and super-super plus for the whirlpool bathtub. Very child friendly.