For a secular country, Norway observes many religious holidays (and by “observe”, I mean get days off work). Spring is full of holidays – religious and otherwise, including 1 May (international labour day), Ascension Day and Whit Monday. But the most important of all is 17 May. 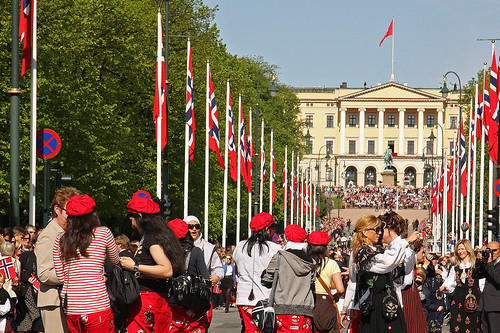 Bigger than Christmas, New Year and your birthday, it’s Syttende mai – Constitution day. Everyone dresses up – most wear a bunad (national costume), and there are parades through every city, town and tiny outpost. Nothing military about the parades; Syttende mai is for children. School by school, children march, sing, wave flags and shout hip hip hooray!

Anywhere two or more Norwegians are gathered, Syttende mai is celebrated: In London and Dubai, in Australia and New Zealand, from Vancouver to Montreal, in several US cities, including New York, Washington DC, Seattle, San Francisco, LA, San Diego and in Texas, Louisiana, Alaska and of course in Minnesota. Many foreign cities have had elaborate celebrations since the 1800s.

Neither rain, snow nor freezing hail storms can stop the Syttende mai celebrations. Up here, there’s no such thing as bad weather, only inappropriate clothes. On Syttende mai, no one is deterred; everyone is out.

The Oslo parade makes a short stop at the Royal Palace, where King Harald, Queen Sonja and their children stand on the balcony for hours, waving and smiling to everyone. Lively, yet peaceful; not a weapon in sight.

Livelier still are the russ – the high school graduates. They wear red overalls and red hats with tassels, whistles and wooden whips, and hand out their mock (naughty) business cards. 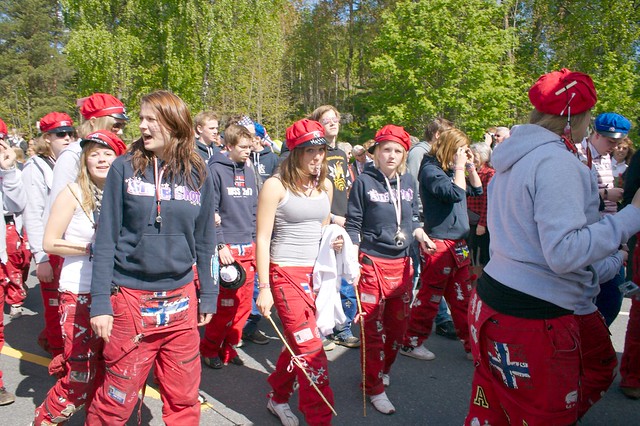 The overalls have likely been worn for 2 – 3 weeks and not been washed (if you’re caught washing your overalls, you have to cut off a trouser leg). Also, chances are the russ are pretty drunk – from beer and lack of sleep. The period between 1 May – 17 May is called the russetid. For most, it’s one long period of debauchery; a continuous party with sex, beer and rock’n’roll.

During the russetid, you collect souvenirs – “knots” in the tassel of your hat – according to mad little challenges you undertake. The traditional ones, first introduced in the 1940s, were relatively innocent. For each night spent awake, you got to tie a knot in your tassel. A reprimand by a police officer gave you the right to tie a match in your tassel and if you kissed the police officer, you earned a seigmann (man-shaped, sugar-coated jelly sweet). Drinking 24 bottles of beer in 24 hours gave you a bottle cap. All sweet and innocent like.

Over time, the challenges have become ever more creative, irreverent and controversial. If you’re the sober type, you can earn: 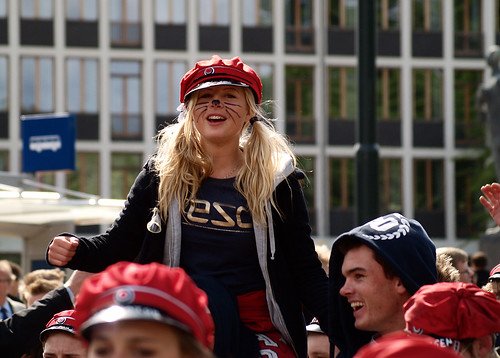 For the rest, well, I’ll keep it relatively civilised, but if you’re easily offended, you may want to stop reading here. If not, well, here are a few of the 100 official knots for Oslo’s russ in 2011:

You’ve earned the right to wear in your tassel:

Yeah. It only gets worse, so I think I’ll stop here, folks.

This is an excerpt – updated – of this article on Boots’n’All.