Abu Dhabi, the capital of the UAE, holds a whopping 9 % of the world’s oil reserves, is the richest city on earth, safe, green, clean … and… dare I say it, slightly dull.

The Emir of Abu Dhabi – Khalifa bin Zayed bin Sultan Al Nahyan, better known as Sheikh Khalifa – is president of the entire country. Not only is he one of the world’s wealthiest royals (good for 60-odd billion dirham), he also seems to be a relatively decent, modern ruler. One of the first things he did in office, was to raise civil servants’ wages by 100 %. As a former government employee, I can certainly appreciate that. It matters not one little bit then, that the US ambassador calls him “a distant and uncharismatic personage”. (Thank you, WikiLeaks, for that info).

I decided we should take the bus from Dubai. A minibus it was, and it looked rather cramped. But as the front seats were reserved for women (UAE gender segregation in practice) and as we were the only women on board, we were quite comfortable.

On an impulse (not mine), we hopped off near a shopping mall, Wahda. Judging by the clientele, it seemed we got off the bus in an affluent neighbourhood. Although I suppose that’s probably true for the entire city. 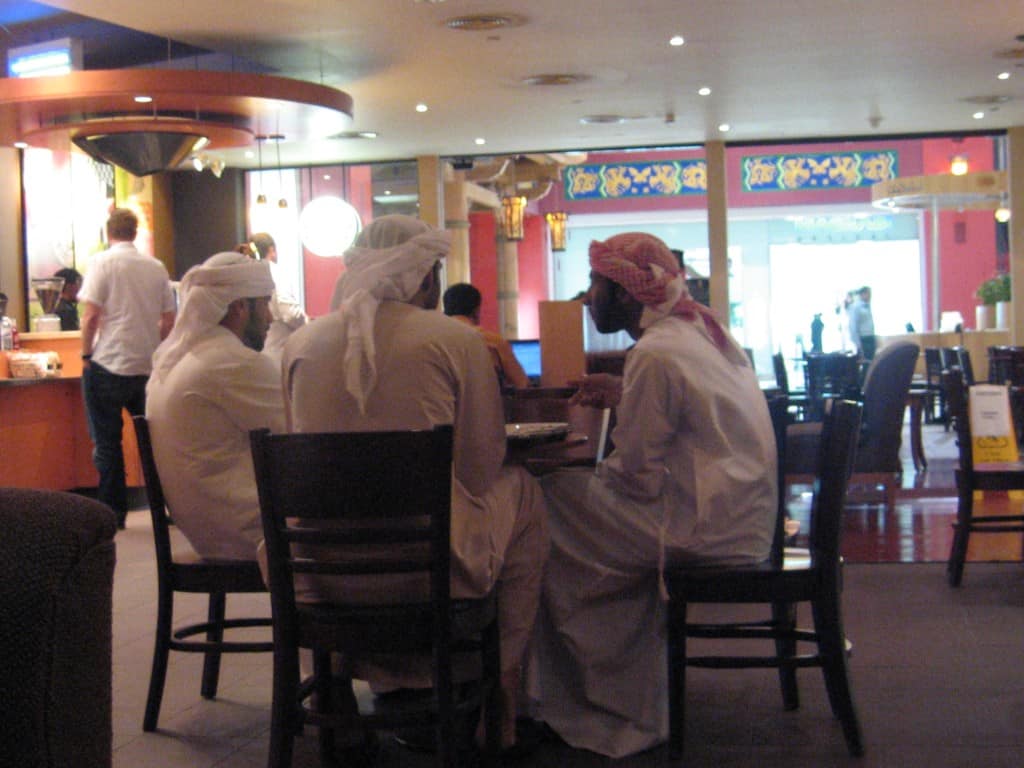 Wahda had the usual array of up-scale shops and cafes. Markets have always been lively meeting places in the Arab world and in present-day UAE, the markets have moved indoors to the air-conditioned shopping malls. As expected, Abu Dhabi’s mall cafes provided interesting glimpses of Emirati daily life – like tables full of young men in dishdashas and headscarves giggling and drinking cappuccinos.

Like Dubai, Abu Dhabi is large but unlike its sister emirate, it’s without obvious sights. There is, of course, the Grand Mosque: white, shiny, stunning, a perfect picture of heaven. That said, we had seen so many mosques the last few days, and most of them gorgeous. A slight case of mosque-fatigue had set in.

The city of Abu Dhabi looks very nice: green, with wide boulevards and heaps of space. There are tall, shiny, beautiful buildings and avenues decorated with large, shiny Arabian coffee pots. And then there’s the corniche. I do like corniches (avenues along the ocean), and the corniche is just where we went next, specifically to the Emirates Palace, run by a fellow Norwegian.

Emirates Palace is the second 7-star hotel in the world (Dubai‘s Burj Al-Arab is the other one), and the most expensive one ever built. Looking like something out of Arabian nights, it is enormous; with a 2.5 km walk around its perimeter! From the lobby to some of the suites is a one-kilometre-stroll. Good then, that you don’t have to carry your own bags. 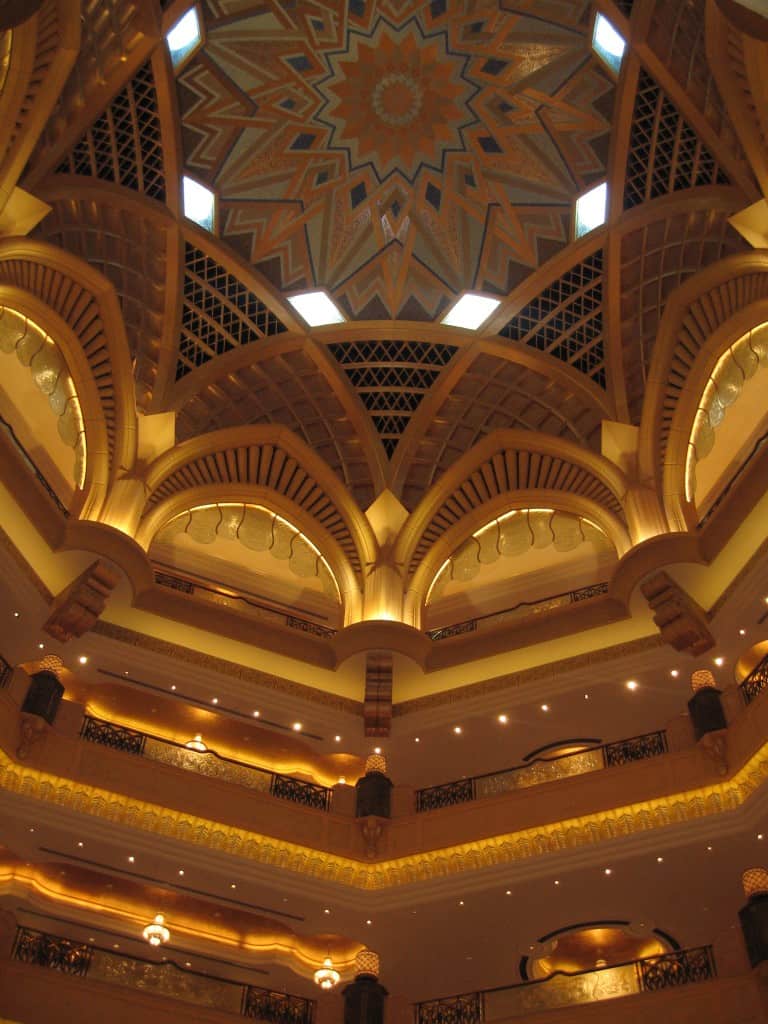 The ceilings are adorned with more than 1 000 Swarowski crystal chandeliers and lovely they all were. But where were all the people? We were told the hotel was almost fully booked. That’s perhaps the trouble with these palaces; so huge they seem empty even when they’re not.

The pianobar was empty as well, even though it was tea time. We had the place all to ourselves. Felt a bit surreal that. Lovely tea, though. 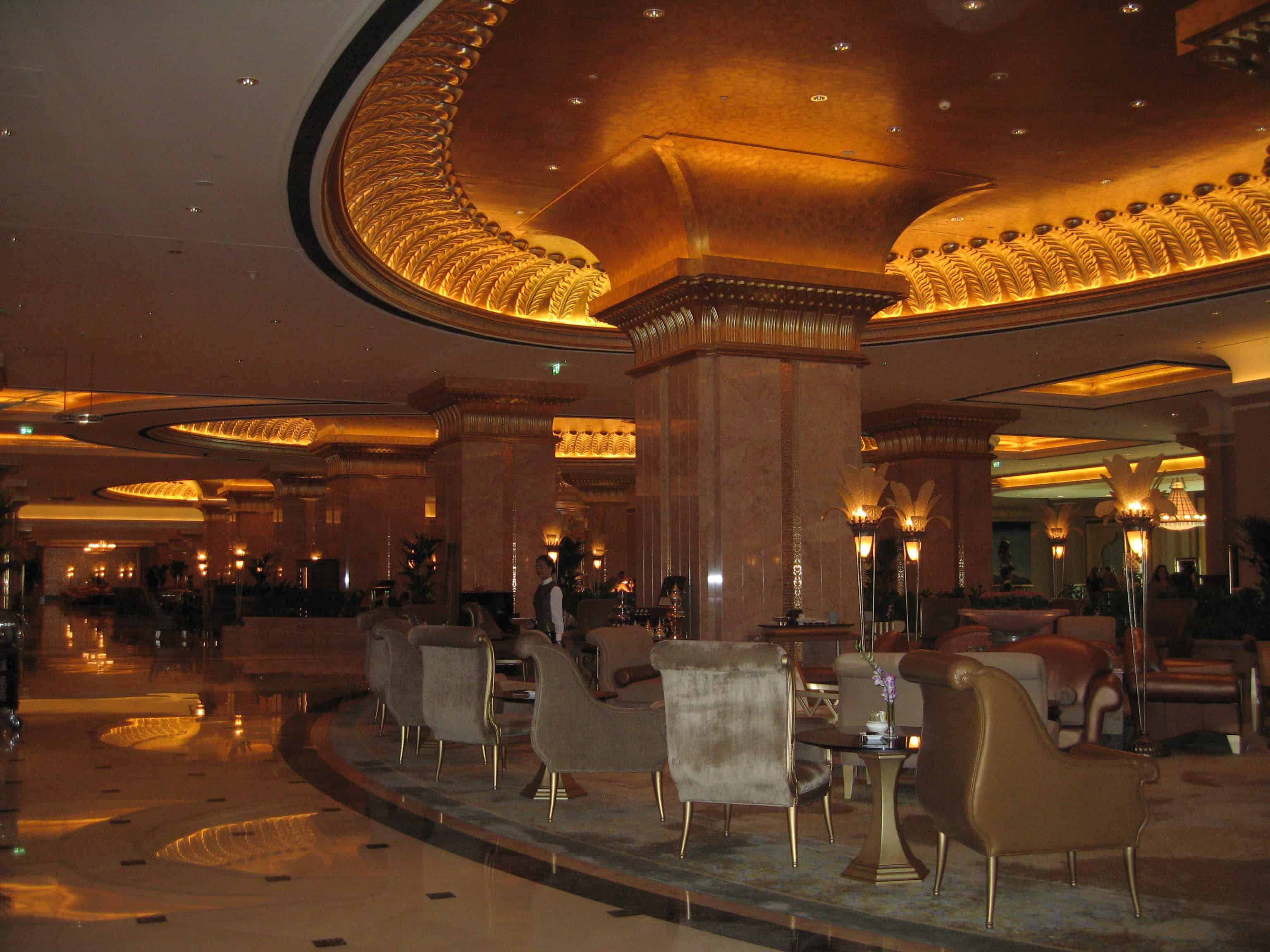 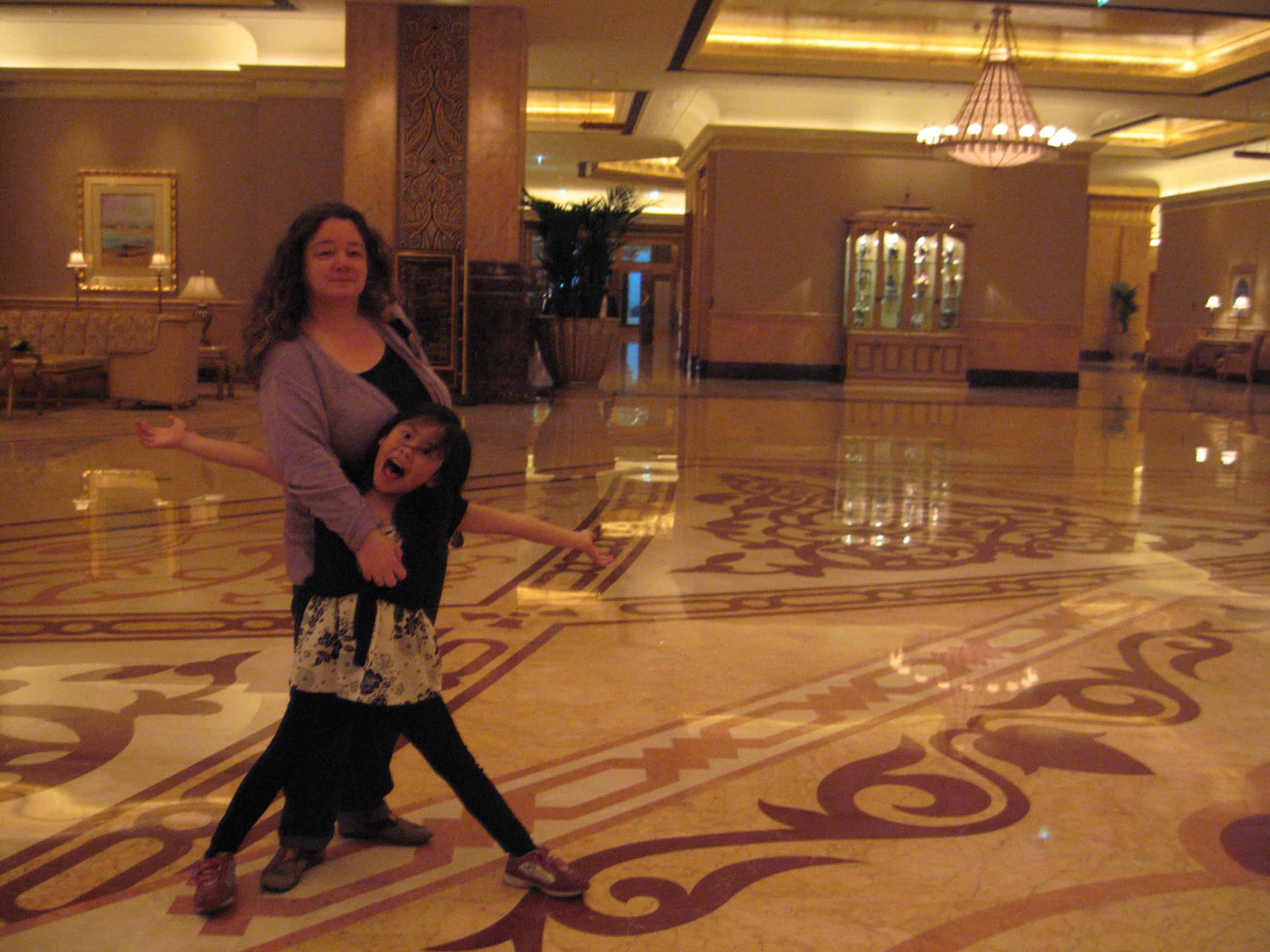 I meant to have a look at the coffee pots on Etihad Square, but by the time we left the hotel it was dark, so I decided it was best to go back to Dubai and get a certain little girl to bed; coffee pots, however cool, would just have to wait.

Oh, and by the way: all lit up, with fountains and all, Emirates Palace looked even more magical at night. Of course.