Oasis – it’s such a wonderful word, isn’t it? Like haven, or sanctuary. The proper definition, the Oxford Dictionary tells me, is a fertile spot in a desert, where water is found.

And that is just what Al Ain is. An oasis. A garden at the edge of the fabled Empty Quarter, inhabited for more than 4000 years. It’s a green city, with tree-lined streets, plenty of parks and seven oases. (It’s also a city of roundabouts, seems like there’s one at every corner.) To maintain a green focus, buildings can’t be higher than four floors.

When I was a youngster, I devoured travel books. One of the many that has stayed with me, with all its wonderful names and descriptions, is Wilfred Thesiger’s fascinating account of his travels through the Empty Quarter. Thesiger stopped by Al Ain oasis in 1947.

Naturally, I’ve wanted to see it ever since. So on a stopover in Dubai a few weeks ago, I caught the bus to the green city. As a bonus (for me, at least), Al Ain also happens to be a world heritage site.

Once off the bus, I found a taxi driver to take me to Hafeet Mountain, or Jebel Hafeet in Arabic. The road up the mountain is a bit of a twisty, turny one, but you’re awarded with fantastic views. At the base of the mountain is Green Mubazara Park with its hot springs. (Wear a modest swimming costume if you want to give the baths a go.) If you’re not in a bathing mood, at least stick your feet in the little rivers. If you have kids along, there’s a water park with a zip line, a climbing wall and all sorts of watery fun as well. 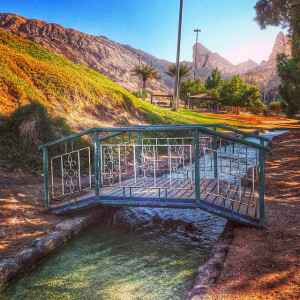 This river of lovely hot water comes from Oman across the border.

In the town centre, practically next to the bus station, is a fort from 1910, that served as protection from Saudi aggression as late as 1952. The fort is now a part of Al Ain Museum. Sadly, I was in town on a Monday, the only day the museum is closed. 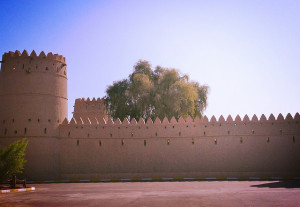 Just behind the museum is Al Ain Oasis, the largest of the town’s seven oases, with a veritable forest of palm trees. Try to imagine riding through the Empty Quarter, under the unforgiving desert sun for days and days, and then coming upon this refreshing spot. 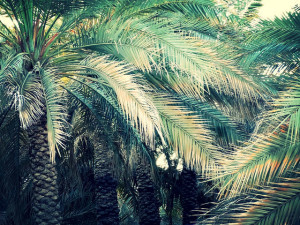 So why is this city in the Arabian desert worthy of special protection for the future of humanity? This is what UNESCO has to say:

The Cultural Sites of Al Ain (Hafit, Hili, Bidaa Bint Saud and Oases Areas) constitute a serial property that testifies to sedentary human occupation of a desert region since the Neolithic period with vestiges of many prehistoric cultures.

In addition to Jebel Hafeet and the oases, there are tombs at Hili Archaeological Park, painting
an exceptional picture of Bronze Age and Iron Age human development here on the Arabian Peninsula. The people managed to develop a positive relationship with the desert and knew how to sustainably use the water resources to create a fertile, green environment. An interesting feature of the oases is the aflaj, a sophisticated below-ground irrigation system from the Iron Age. Quite impressive water management.

All in all, I found Al Ain oasis to be a very worthwhile daytrip from Dubai. 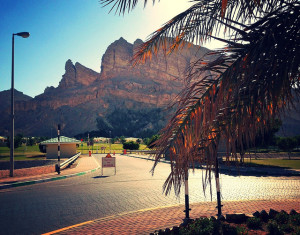