The ARoS experience: art as provocation

If you want to show me a modern art museum, I’ll say it right out: it’s going to take something unique to capture my interest. Make me feel! There’s too much bland in that world that doesn’t move me. All the better then, when I find something I really like. ARoS Aarhus Art Museum is that. I love how this innovative museum speaks to my senses – and emotions, in many different ways. Two hours in here, and I’m left feeling alternately furious, thrilled, shocked, disgusted, hopeful, confused, joyful, sad.

ARoS houses enormous paintings, sculptures, drawings, bits and pieces of nature, installation art, collages, and mannequins (or fake doll people, as my youngest used to call them when she was a wee one, and scared of them).

The most striking feature of this art museum is the circular rainbow bridge on top, visible from many points in town, and when approaching from the sea. I walk around and around this 150-metre panorama, delighted to see how colours change the cityscape.

Circling the rainbow, I feel everything is possible, just by changing my perspective ever so slightly. I am intrigued by how the different colours change the mood, both looking out – and looking at myself. The world in warm autumn colours: orange, yellow – and then in chilly winter hues, worthy of Jadis, the White Witch. Warm colours suit me best, yet I love blue and green, and all the shades in between. Contrasts, gliding into one another – here, and in my mind. 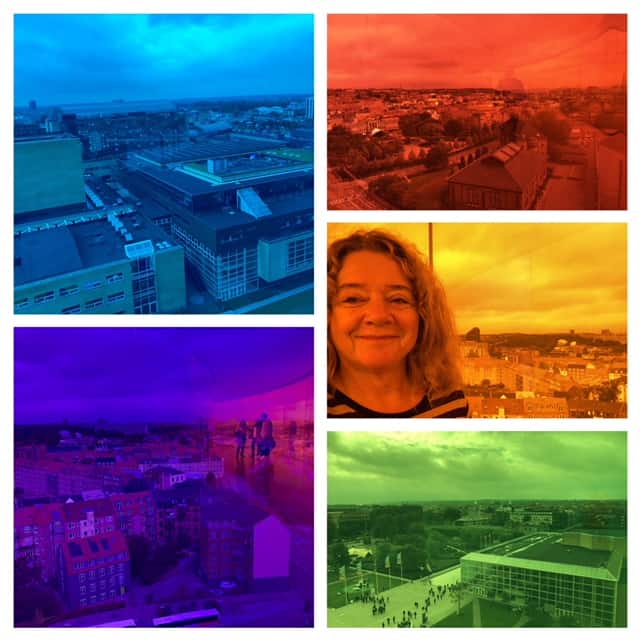 Below the rainbow circle, 10 floors of exhibitions – some permanent, some temporary – are connected through an eye-catching bright white spiral staircase in the middle.

To give you an idea of what to expect, here’s a little selection of provocative art on display in September 2018. Let’s dig in:

I’m met with installation art. BOY is in my face. A 4.5-metre tall little human crouched, squat. Much too tall to stand up even halfway straight, he looks a bit miffed. I would too, if I were that cramped. BOY was sculpted by Aussie artist, Ron Mueck. The huge, yet little, kid is freakishly real, and my eyes are drawn to the intricate details: skin, veins, little body hairs. I’m half expecting him to stand up with a roar, and crash through the ceiling.

In Toni Matelli’s Fucked (Couple) – a man and a woman have apparently been attacked by several weapons, including a Steinway grand piano smashed over their heads. He has half an arm torn away, a piece of wood lodged in his stomach, a long stick embedded in his back and a dagger sticking out of his thigh. She has a leg severed at the knee, a pair of scissors stuck in her elbow, a sword wedged in her chest. And her head… I don’t even want to talk about her head. Fucked, indeed! Yet, they carry on, hand in hand. On his arm, a tattoo: ‘True Love Forever’. I guess there’s always hope. 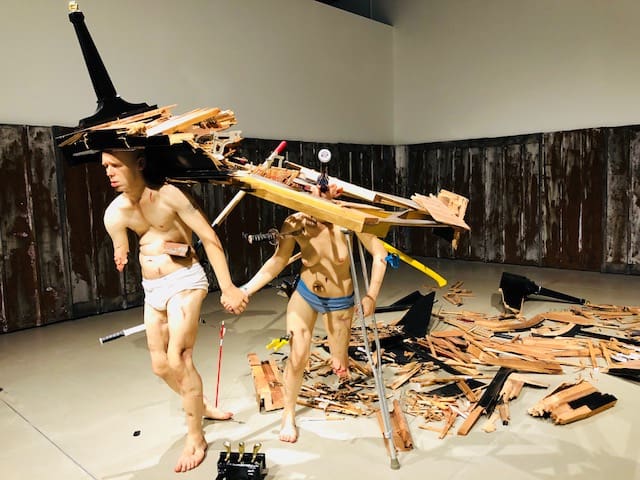 ‘Anything helps’ is Jani Leinonen’s thought-provoking series of gilded picture frames with beggar cardboard signs from all over Europe. The capitalist critical artist has bought the signs from beggars, rather than create them, thus becoming part of the world as a massive economic circuit himself. 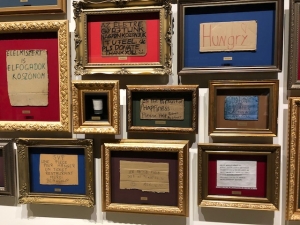 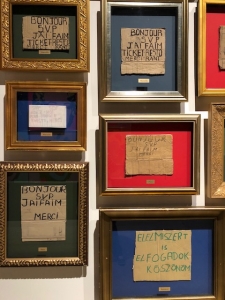 Andy Warhol is here, as expected. Pop art. Marilyn in technicolour. And an electric chair. 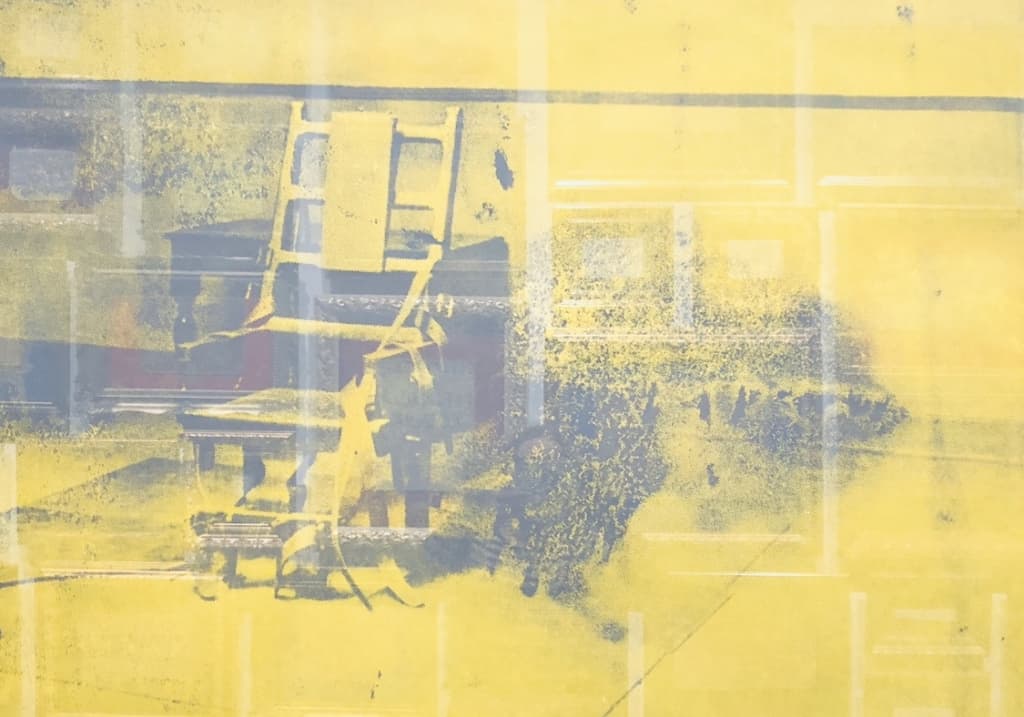 British brothers, Jake and Dinos Chapman, have created March of the Banal, showcasing the grotesquely explicit, half melted mannequins, torture. I stare, mouth open probably, at a family, all with their eyes poked out, holding eyeballs in their hands. All accompanied by an unpleasant whirring noise. 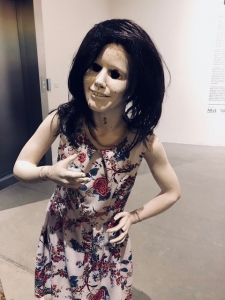 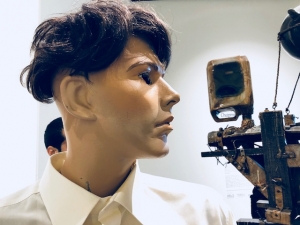 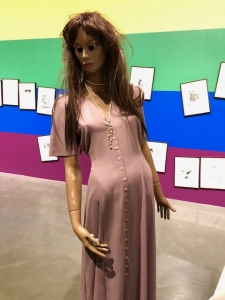 What would the world have looked like, had 17-year-old Adolf not been rejected by Vienna’s Academy of Fine Arts, twice? Might he have gone on to become a (mediocre) artist and not, well, killed millions? There are 11 watercolours here, painted by Der Führer himself, though somewhat modified by the Chapman brothers. 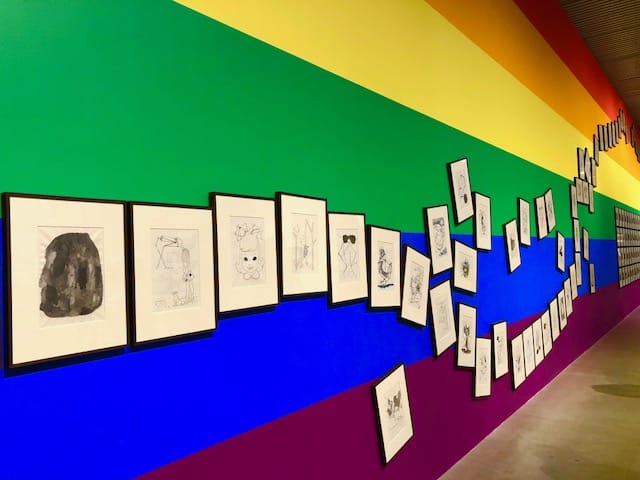 I want to leave. I can’t leave. I want to run away. I’m glued to the spot. 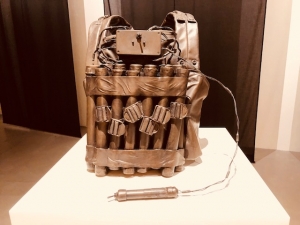 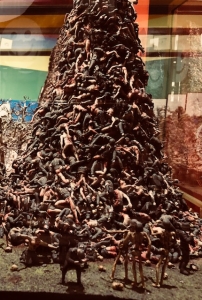 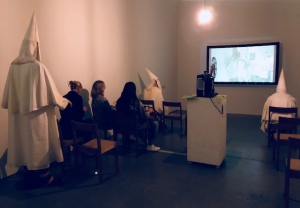 ‘Low Key’ is a Lamborghini full of scratch marks. Had I been here earlier, I could have keyed the once lovely thing. Now there’s a sign saying no more. Too many have obviously taken delight in this activity.

On Level 8 are paintings. Traditional, classical, ‘normal’ paintings constitute the exhibit ‘Human Nature’, contained in several rooms, all in different colours. Something to think about – but only if you want to. You can walk around here, simply admiring the colours and the brushstrokes. A relaxing treat. 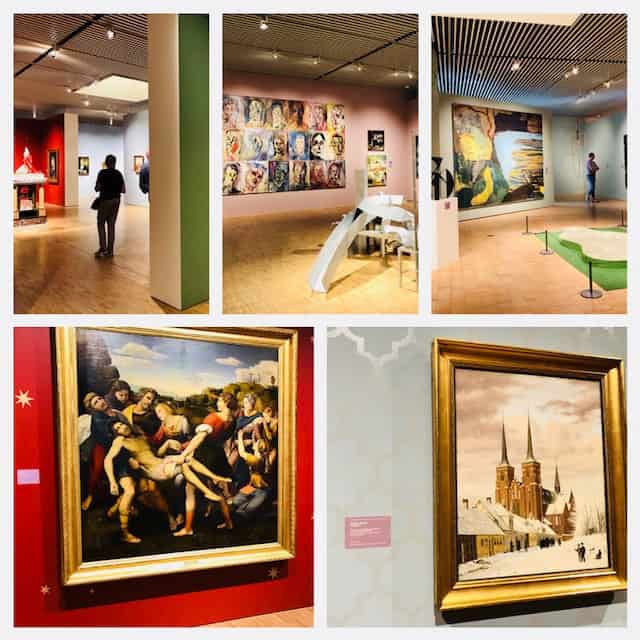 – Entrance fee: 130 DKK, free for children under 18, free for everyone with the AarhusCARD.

Disclosure: I’ve been in Denmark more times than I can count, sometimes for work, other times for pleasure, usually for both; sometimes at the invitation of someone else, sometimes of my own accord. This time I was a guest of Visit Aarhus. Every word, every thought, and every opinion are mine, all mine. As always, as ever.