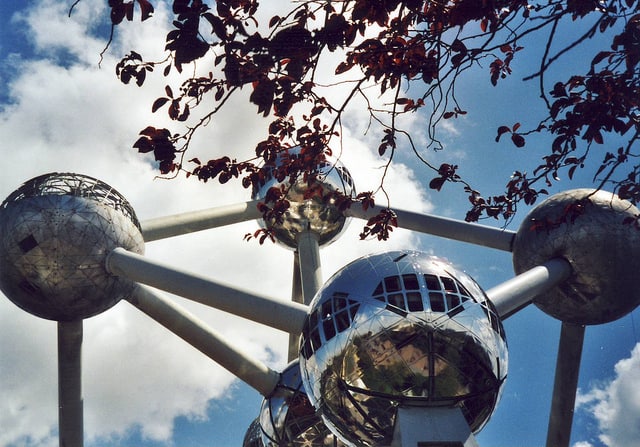 I’ve been to the capital of Europe countless times. I even lived there for a few months after uni, while I was contemplating what to do with the rest of my life – amongst friends persuading me to join them in diplomatic/bureaucratic service. Idly contemplating, I should hasten to add, involving many a late night and lots of Belgian, eh… cheer.

Going through the blog just now, I discovered I have written absolutely nothing about Brussels – or indeed Belgium. Naught! Rien! Niets! Not even the merest reference to the greatest cartoon character of all time, TinTin.

Well, for shame. This requires immediate amendment. And what better place to begin than with Brussels’ most noticeable landmark. No, I’m not speaking of a certain little boy micturating (yes, that is a word), but something much cooler.

CNN has listed Atomium among Europe’s most bizarre buildings. It’s in good company – with the likes of Gaudi’s Casa Mila, and the Eden Project in Cornwall.

Like the Eiffel Tower, Atomium wasn’t meant to survive beyond the World’s Fair, but 55 years later, it is still standing, like a shining totem to science. I like it!

Have you seen Atomium? Thoughts?

Linking up with Wanderlust Wednesday this week.