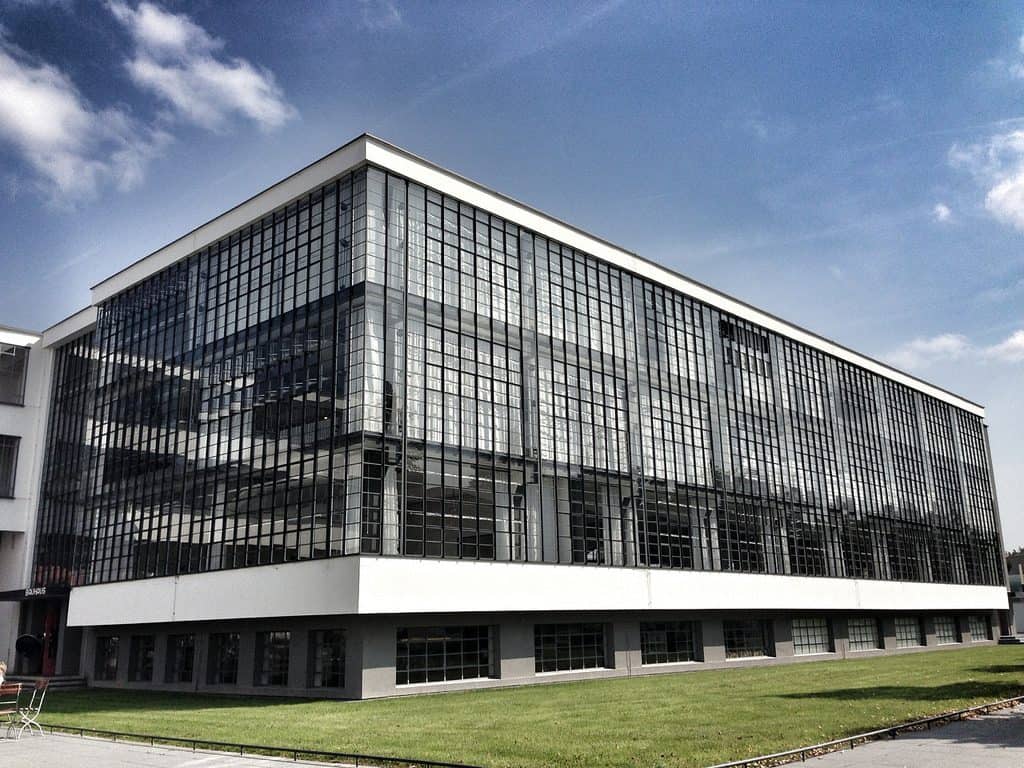 Have you seen Babylon Berlin? It’s one of my favourite series to binge during these times where all we have is time. The series is set in late 1920s Berlin and – despite the gloom and doom of those years – well, I just want to be there. Even for just a few days. As soon as Elon sets up time travelling, I’ll be the first to volunteer. So much more interesting than mere space travel.

This isn’t going to be a review of Babylon Berlin, though. Instead, this little glance at the world has a narrower focus: the revolutionary architecture of that era, Bauhaus.

What does Bauhaus mean to you? Perhaps you think of the 1980s British dark glam band, godfathers of Goth? The band was named after the Bauhaus movement because of its stylistic implications and associations. They even used the same typeface as that on the Bauhaus university building in Dessau.

Or – if you’re in my part of the world, you may think of the large pan-European DIY-chain (also founded in Germany). Presumably they were also inspired by the Bauhaus movement. Of course, Bauhaus simply means ‘building house’; probably a twofer there. 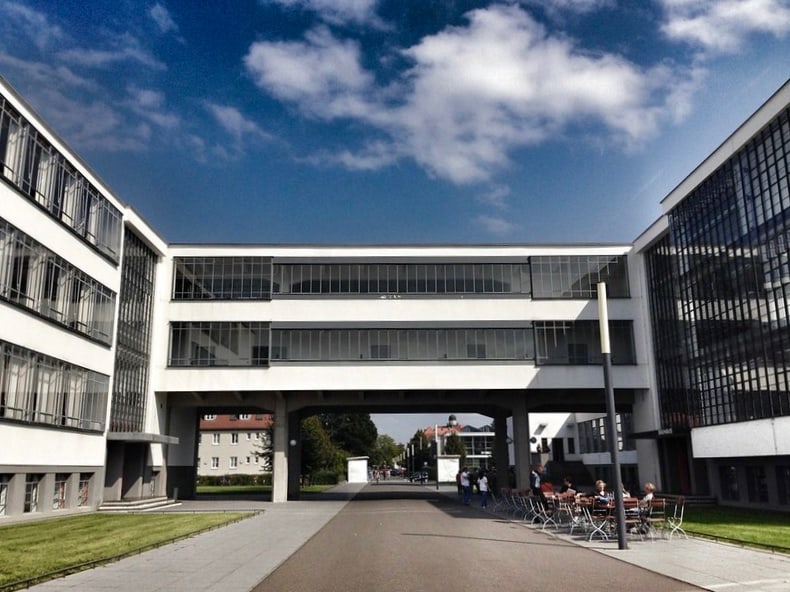 In this post, I talk about architecture with a conscience; about Modernist buildings in Berlin designed for social housing projects after the Weimar Republic, when the German economy was in shambles after the demands of post-World War I reparations.

Looking at those rather ordinary blocks of flats in Berlin, you won’t immediately grasp their significance. In fact, you may even walk right past them, without even noticing. As well, looking at the photo above, all you might see is a modern glass building, perhaps not that special.

Just like those housing projects, this particular world heritage site also needs a context for us to appreciate its importance.

Weimar is where it all started. For all intents and purposes, Weimar was the capital of interwar Germany, and this is where the Bauhaus School was founded in 1919 by Walter Gropius.

Gropius called it Staatliches Bauhaus, and was soon joined by Mies var der Rohe (famous for introducing the expression ‘less is more’ to the world), Hannes Meyer and others. If you’re the least bit interested in architecture, these will be familiar names to you. Along with Aalvar Aalto, Le Corbusier and Frank Lloyd Wright, they were all Modernism pioneers.

The group revolutionised design and architecture, and had a huge impact on 20th century architecture all over the world. 100 years later, its influence is visible still.

Like Modernism, Bauhaus is more than architecture. It’s also an art form, a philosophy and, not least, a way of thinking. You could almost say, a state of mind. Bauhaus, you see, is about working together and teaching. And about using modern technology in new ways. Bauhaus was all about creativity and innovation. Weimar – and later Dessau – was a bit like Silicon Valley of the early 1900s.

However, it hasn’t been without controversy. Such radically modern thinking and style didn’t sit well with the conservative powers of Weimar at the time. But despite the massive political, financial and social disruption of the Weimar Republic, Bauhaus survived. The collective simply moved on. To Dessau, 150 km away, where things were a bit lighter.

It’s in Dessau you’ll find the best examples of Bauhaus design. That was fortunate for me, since that is where I happened to be.

Weimar will have to wait for when I have more time. Time for more Bauhaus, for Classical Weimar, and not least, for Aunt Mary. My mum’s aunt studied architecture in Weimar in those heady days nearly a century ago. What an exciting, vibrant time to be there! As a young ‘un, I never really spoke to her about her student days. Never spoke much to her at all, actually. Bit intimidating, Aunt Mary was. In hindsight, though…

Seeing the Bauhaus buildings in Dessau 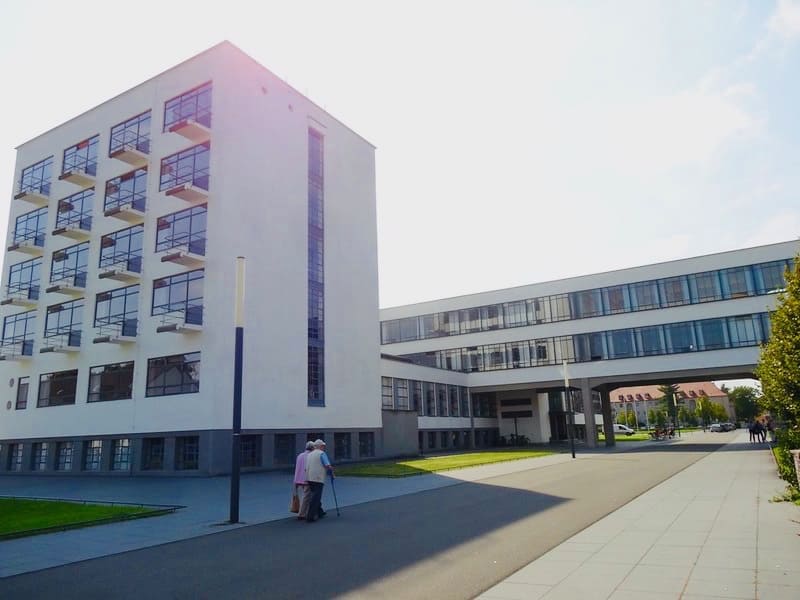 So, the main Bauhaus building is in Dessau, the Bauhaus Studio, designed by Walter Gropius in 1925. You’ll find it on Gropiusallee 38. All glass, steel and concrete, the new materials of the time – and a monumental homage to 20th century architecture.

Nearby, at Ebertallee 67, are the homes of the most important teachers of the Bauhaus School, seven Meisterhäuser, Masters’ Houses, with verdant gardens in typical Bauhaus style. Gropius himself lived in one of them.

For up-to-date information about opening hours and admission fees, have a look at the Bauhaus website. Dessau is about 1.5 hours by train from Berlin, and the Bauhaus Building is about 10 minutes walk from the railway station, well signposted.

Geeky cool tip: your own key!

In Vienna, I totally geek out whenever I stay in Pension Nossek and have my own key to the huge, heavy door of the building where Mozart once lived, walking those same stairs he walked. Same when staying in the old light master’s apartment at Lista lighthouse, with my very own key to freely enter and climb the stairs to the top of the lighthouse at all hours of the night. Likewise, in Dessau, you can spend the night in the studio building! Having your own key to all that Bauhaus nirvana! This must be practically orgasmic to architecture aficionados. 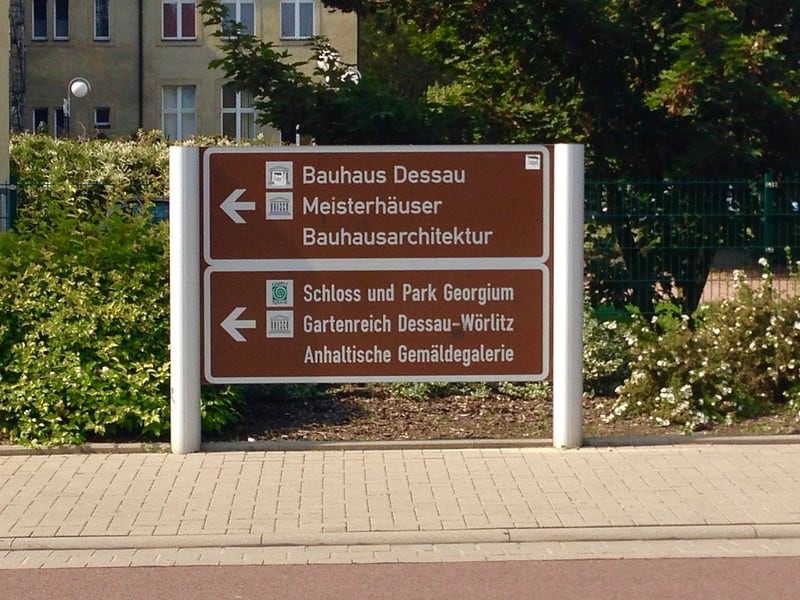 Dessau may not be the best known place in Germany. But this little town of 80 000 residents is home to not one, but two world heritage sites. In addition to Bauhaus design, there’s the Garden Kingdom of Dessau-Wörlitz, which is just minutes away from the Bauhaus buildings. You’re welcome.