Baalbek, Anjar and wine: 3 highlights of the Bekaa Valley (Day out Beirut)

Crossing Mount Lebanon, I’m now deep into the Bekaa Valley, in Heliopolis. You might know it better as Baalbek. This is Hezbollah country, visible by the militant organisation’s characteristic flag – green logo on yellow background –  but not much else.

My first glimpse of the legendary temple complex here in Baalbek is from the verandah of my charming hotel. It looks a wonder in daylight – even more so lit up at night. 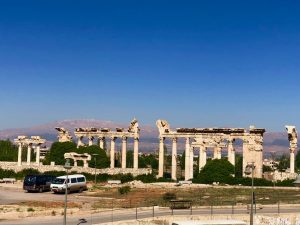 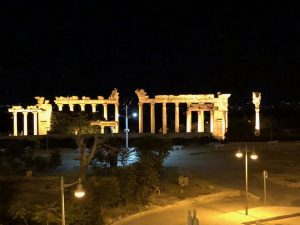 We’re not quite finished with Lebanon’s wonderful heritage sites yet, see.

Baalbek is 90 km from Beirut, along the Beirut – Damascus International Highway – about halfway between the two capitals. It’s possible to visit Baalbek as a day trip, but I wouldn’t advise it. Stay the night, preferably at the quirkily delightful Hotel Palmyra. You’d be in good company. Agatha Christie stayed here. So did Kaiser Wilhelm, Albert Einstein, Nina Simone, and heaps of others – all here to see the best preserved and most massively magnificent Roman ruins in all of Lebanon; some would say in all of Rome. The sheer size of this complex demonstrates the might of the Empire very well; Baalbek was one of Rome’s largest sanctuaries.

The complex was built over a period of two centuries, in layers – one on top of each other: Phoenician, Greek and Roman. It comprises temples to Jupiter, Venus, and Bacchus. So we have the king of gods, the goddess of love, beauty and fertility, and god of the vine – and of fertility. How appropriate here in the fertile Bekaa Valley. Also, these three are the Roman version of Phoenician fertility gods that were worshipped here even earlier. The three religions have all been mixed up at Baalbek. I think modern religions/societies could benefit from adopting this pragmatic world view.

Entering by the Temple of Venus, I’m not sure the goddess would be overly happy with the condition of her shrine. It’s mostly rubble. Maybe that’s her there, sending down a defiant beam. 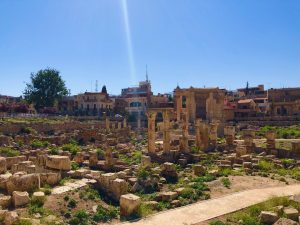 But things immediately improve. Venus’ temple is a bit outside the main area of the complex. From there we enter the site proper through the old ceremonial entrance, this human-dwarfing stairway. 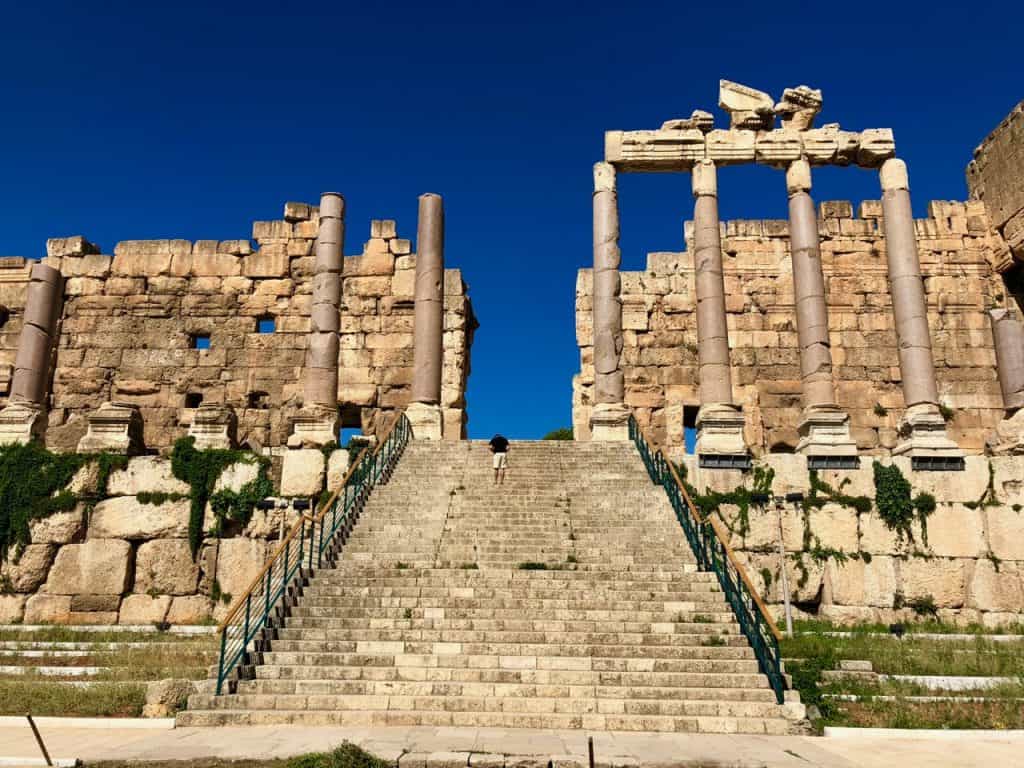 After that, it’s all Roman pomp and grandeur. Everything here is colossal and solid and surrounded by the Anti-Lebanon range, snow-topped even now in May. 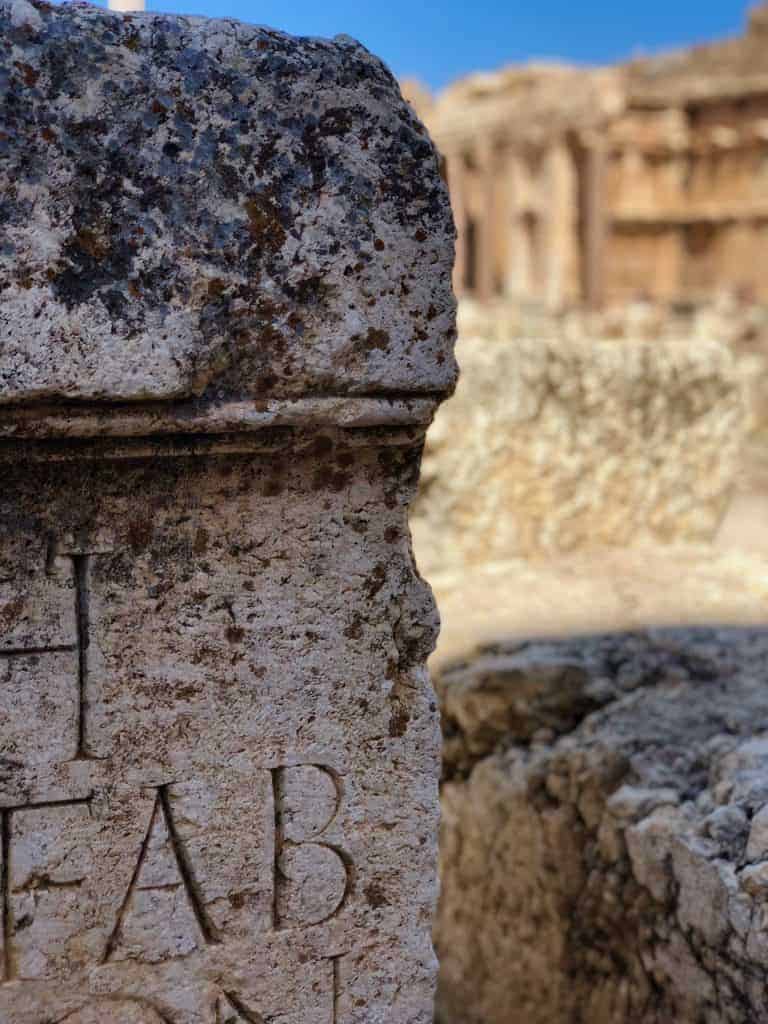 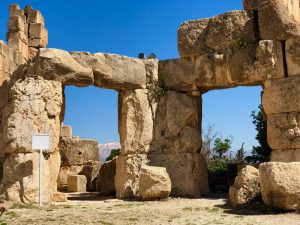 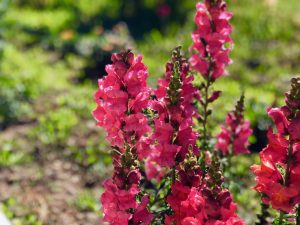 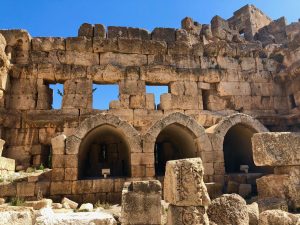 Next to Jupiter is Bacchus. Looks like his massive temple could have been in use yesterday, doesn’t it? Be sure to get in close – and look up – at the finely carved details. 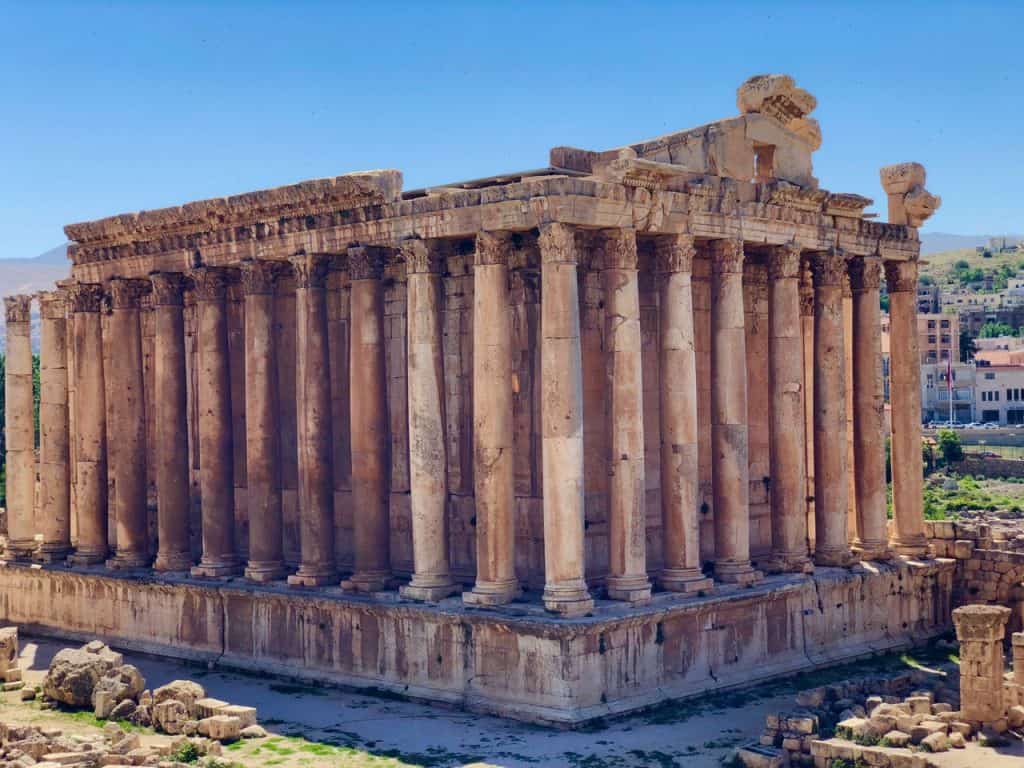 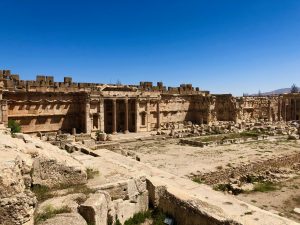 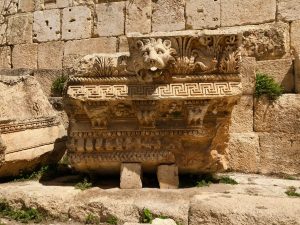 Graffiti through the ages 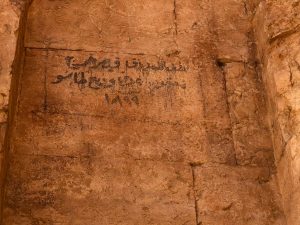 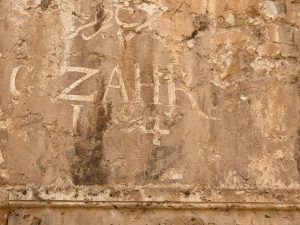 And from modern times… the gate keeper office: 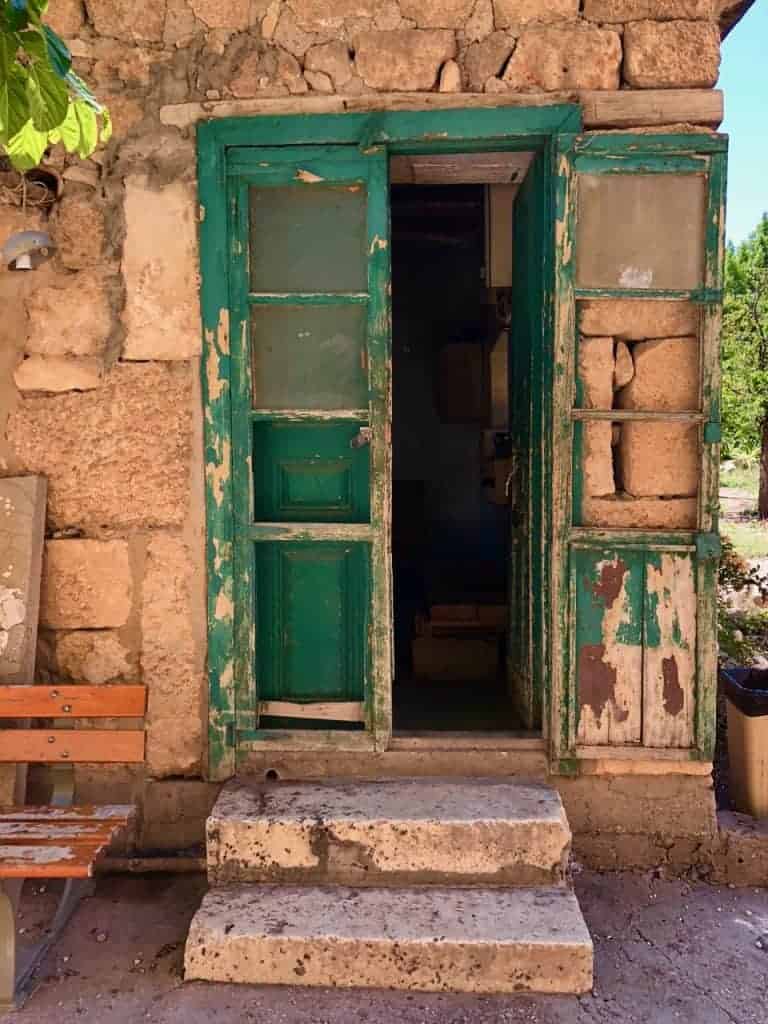 Outside the temple complex are a few stalls selling souvenirs, including Hezbollah t-shirts. I consider buying one – but hesitate. And then the peddler simply hands me one. Can’t say no, can I? Though, where I could possibly wear a Hezbollah t-shirt… 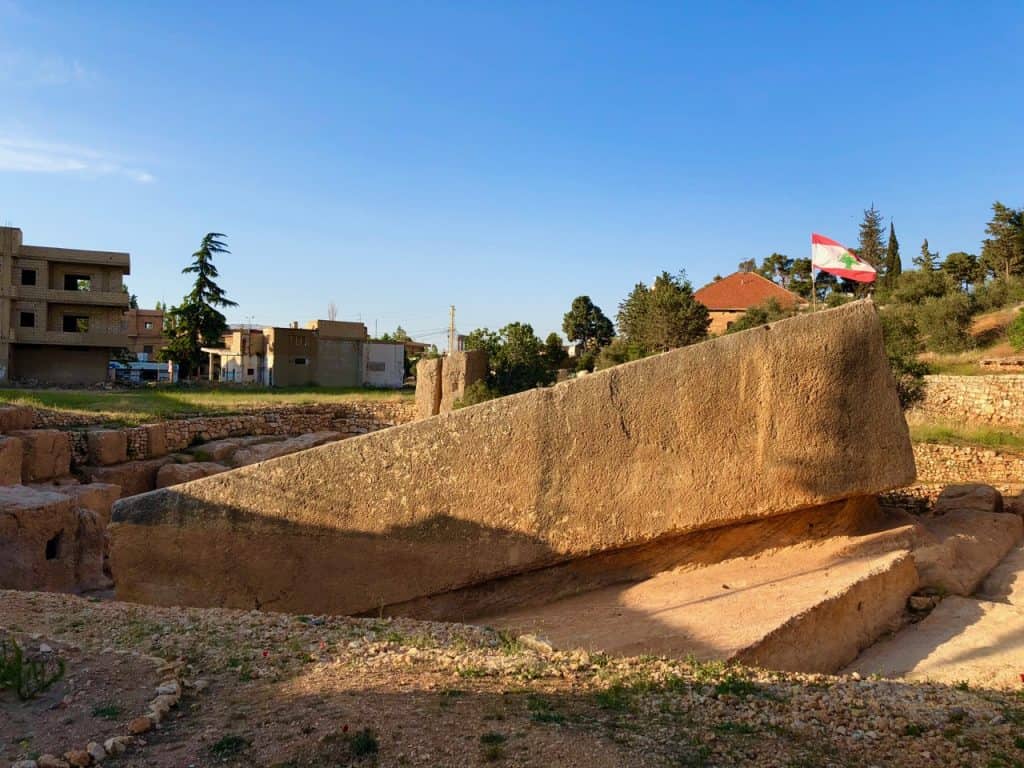 In Baalbek, you can also see the pregnant woman’s stone, billed as the largest monolith in the world. Maybe. At 20 m long, 4 m high and 4 m wide, it’s certainly one of the largest.  (I’m reminded of Hatshepsut’s unfinished obelisk in the quarry in Aswan.) The peculiar name has many back stories, one of them says that touching the stone will increase a woman’s fertility.

Just down the street from ancient Baalbek, we bid adieu to contemporary Baalbek at this cheerful sign. Onwards to the city of the Umayyads.

Anjar, city of the Umayyads

About one hour south of Baalbek is the Umayyad city of Anjar. We’re now 5 km from the Lebanese border. On the other side is Syria, yet the Syrian border is more than 20 km away. The area in between is no man’s land; not in a dangerous sense, but because the borders are either side of the mountain.

Here at Anjar, we’re in the Arab world. Anjar was a stronghold built in the 8th century by the Umayyads (rulers who took over after the death of Muhammed) then abandoned, leaving behind the ruins of their city.

The ruins aren’t nearly as grandiose as at Baalbek (are they anywhere…?), but they do appear Roman. No wonder. Anjar was built with stones taken from Roman buildings that were already there. So you have an Arab town, but with Roman columns and arches.

Anjar was discovered in the 1970s, and is only partially excavated, but still an interesting site to explore. Keeping in mind that this was a city rather than just palaces and temples, the atmosphere feels different. There are homes, thermal baths, places of worship, shops, a sewage system… almost like a miniature Pompeii, only Arab. All within the city walls, covering a rectangular area of only 114 000 sq metres. The fact that we’re only about 10 people in total walking around this ancient city, makes it even more intriguing. 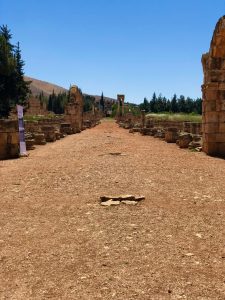 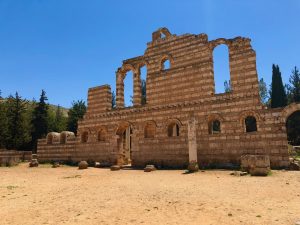 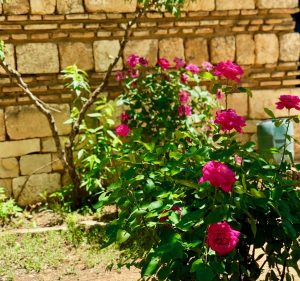 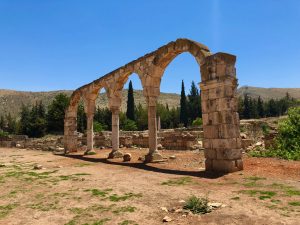 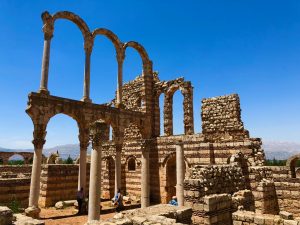 Wine in the Bekaa Valley

20 minutes from Anjar is your opportunity to sample the nectar of the gods, i.e. the wonderful wine of the Bekaa Valley. There are several wineries in the valley; we have a look – and a taste – at Château Ksara, the country’s oldest.

It isn’t known how long wine has been produced in the Bekaa Valley, but considering the enormous temple to Bacchus at Baalbek, I think it’s safe to assume 2000 years, at least. 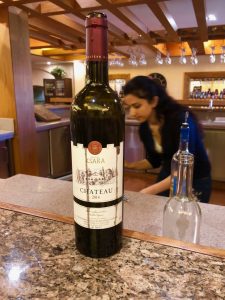 These words from Ksara is an appropriate end to our little series of posts from this captivating country: 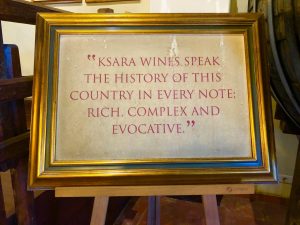