We’ve covered many serial world heritage sites here on Sophie’s World. Some are within the same country, such as the mining landscapes of Cornwall and Devon, while others are transnational: Struve’s Geodetic Arc, Europe’s ancient beech forests, and even transcontinental, like le Corbusier’s buildings. 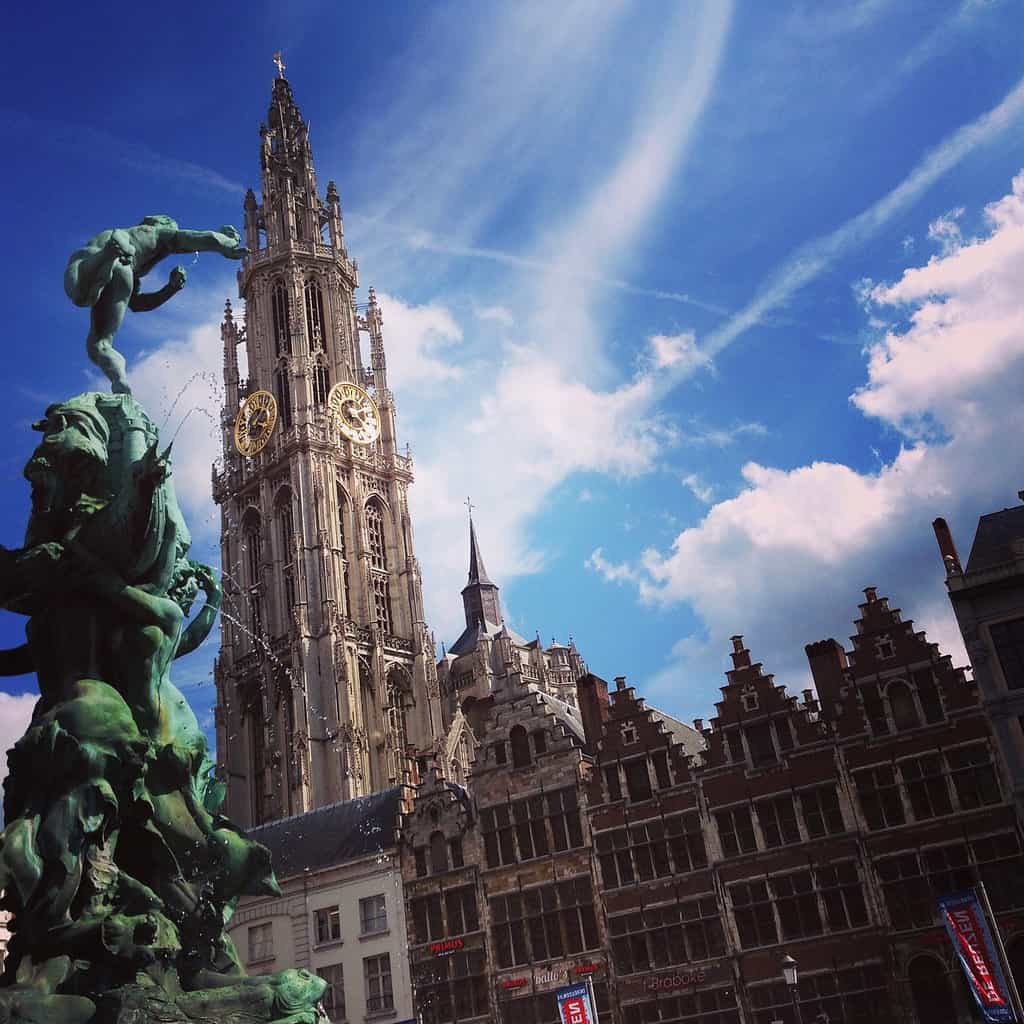 Today, we’re in Belgium, taking a look at a transnational property, comprising 56 belfries scattered throughout this country and northern France.

Unlike Struve’s Geodetic Arc – which stretches from Hammerfest at 70.6632° north, to Istanbul 2 820 km away – the belfries in Belgium and France is an extraordinarily easy serial heritage site to cover. The two northernmost belfries are in Antwerp and the southernmost is in Amiens; not a great distance at all. In fact, you could visit just about any town in Belgium (especially in Flanders) or northern France and see one of these towers. With time and dedication, you could even visit all 56.

So what are these belfries? Why are they there? What do they symbolise? And, not least, what gives them the coveted OUV status? (UNESCO speak for Outstanding Universal Value).

According to the World Heritage Committee:

…Built between the 11th and 17th centuries, they showcase the Roman, Gothic, Renaissance and Baroque styles of architecture. They are highly significant tokens of the winning of civil liberties. While Italian, German and English towns mainly opted to build town halls, in part of north-western Europe, greater emphasis was placed on building belfries. Compared with the keep (symbol of the seigneurs) and the bell-tower (symbol of the Church), the belfry, the third tower in the urban landscape, symbolizes the power of the aldermen…

What that essentially means, is that these belfries represent the increasing importance of the cities themselves – and the corresponding decreasing importance of feudal rulers, religious or otherwise. And what better way to illustrate that shift of power than to build tall towers – powerful and potent.

Sometimes the belfry is part of a church, including the Cathedral of Our Lady in Antwerp in the photo above, but mostly the belfries symbolise the cities themselves – secular power, rather than religious.

The 56 belfries in Belgium and France look quite different from one another. Many are part of other buildings (City Hall in Antwerp), while others stand on their own. Some are square, some are circular, some have turrets (Cloth Hall in Ypres), some look like a wedding cake. Some are squat, some are spires. Some, especially the early ones, were built in part as robust, defensive structures. The ones built later are often slimmer, and seem to have been built with aesthetics more in mind. Substance, when that was needed; then style.

PS You’re wondering why the magnificent belfry on Brussel‘s city hall isn’t part of this serial site? Well, I’m wondering, at least. And I expect it’s because this belfry is part of the stunning Grand Place, a world heritage site in itself. Though, as far as I can see, there’s really no reason this can’t be part of two sites, as is the one in Bruges (Belfries of Belgium and France, and Bruges’ historic centre). 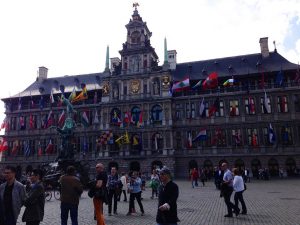 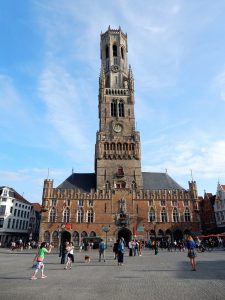 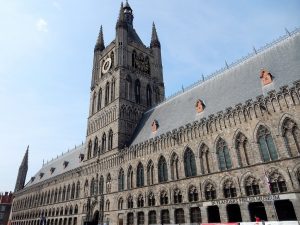 From left to right: the belfries of Antwerp’s City Hall, Bruges (one of the main ‘characters’ in the film In Bruges) and Ypres Cloth Hall (the present-day In Flanders Fields Museum), near the evocative Menin Gate.

You are allowed to climb several of the belfries (e.g. Bruges), and some even offer guided tours (e.g. city hall in Antwerp). Here’s Bruges seen from top of the town’s belfry. 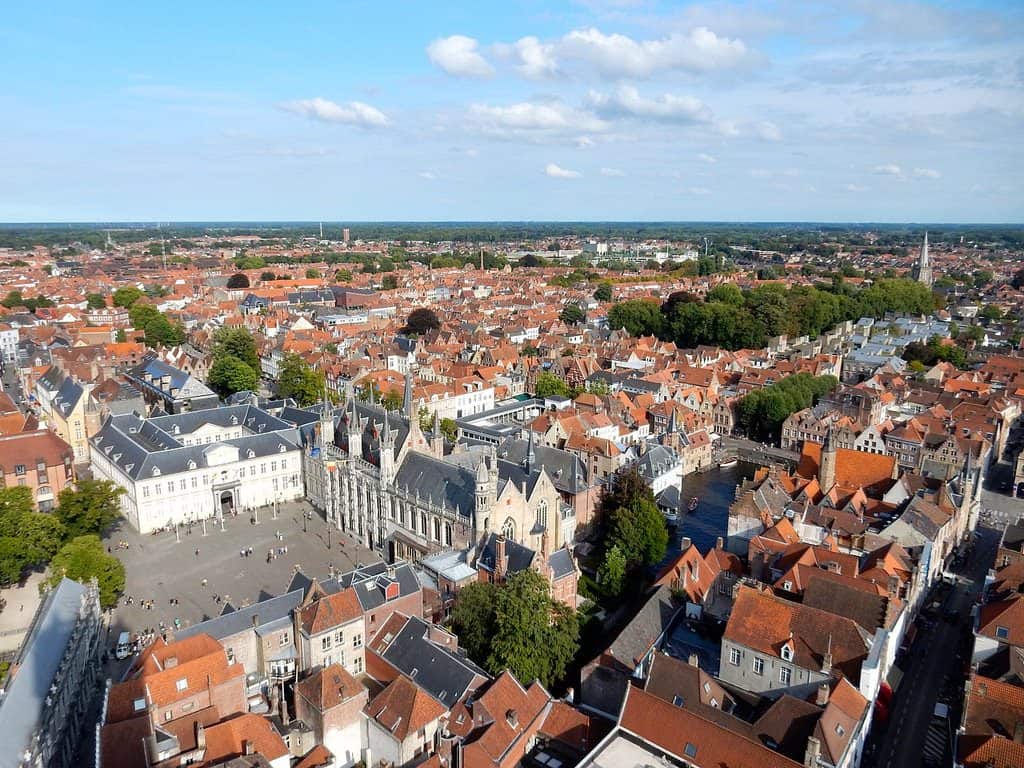 Belfries in Belgium: which one to see?

Which ones should you visit, if you just want a little taste? Well, you’d want to combine it with other fun and/or interesting things to see and do, wouldn’t you? And you’re in Belgium, so you’ll want to sample food, chocolate and beer, no? You might even want to see other (non-belfry) world heritage sites while you’re there. If so, your best bet is either

Disclosure: I’ve been in Belgium a gazillion times, whether in Brussels, Bruges or Antwerp, whether for work or pleasure; sometimes on my own accord, and sometimes at the invitation of others. No matter who foots the bill, I always retain the right to write whatever I want, or even nothing at all. My bit of cyberspace, my rules. Otherwise, this would make no sense.