World at a Glance: Black Rocks and petroglyphs in St Kitts 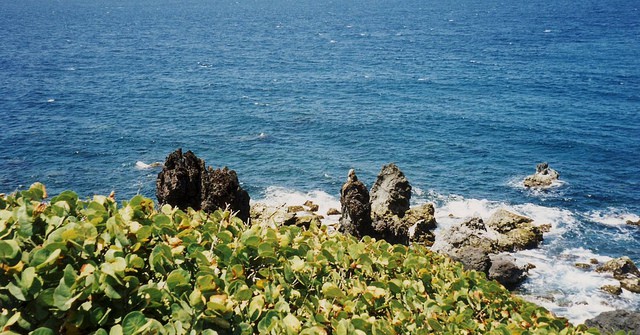 At one of the spots where the wild Atlantic Ocean meets the Caribbean, these odd rocks by the shore are the result of flowing lava, now forever frozen in time. It’s a good place to stop for a while. Waves smash into the rocks with savage force; Mother Nature hosts quite a show here. ‘Don’t you mess with me,’ she says. ‘I’ll always win.’

The lava came from the strato volcano Mount Liamuiga, also known as Mount Misery. If you’re up for it, the climb up Misery takes about two hours and is rather steep, but the views are even more stunning. And back at the rocks, fresh coconuts are available. As is jewellery and various knick-knacks. Can’t be helped.

Oh, and in case you wondered…I haven’t forgotten the rock carvings. There are several around the island. As we have quite a few dotted about in Norway, too, we’re quite the savvy petroglyph hunters. The ones pictured here are near the entrance to Romney Manor, an old sugar plantation.

When you’ve lounged at the beach and explored the island’s capital, lively little Basseterre, and perhaps even taken the boat across to even smaller Nevis, it’s time for a road trip. Black Rocks, the petroglyphs and the fortress at Brimstone Hill are all good stops.

World at a Glance is a series of short articles here on Sophie’s World, with a single photo (well, two this time), portraying curious, evocative, happy, sad or wondrous, unexpected little encounters.