World at a Glance: The Bone Church at Sedlec (Day out Prague)

About an hour’s drive east of Prague you’ll find a curious church. In the late 1800s, František Rint, a Czech wood-carver, was given the task of furnishing the church with, well, bones. 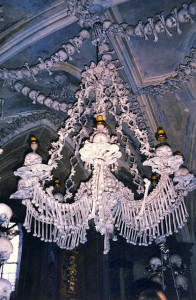 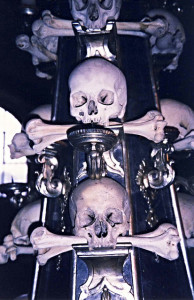 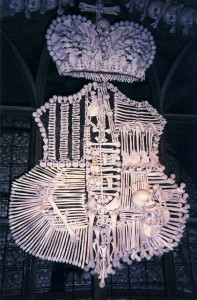 Years ago, I travelled with my oldest daughter, 10 at the time, around in Czechia for a bit. I much prefer the name Czechia to the more cumbersome Czech Republic. And no, I’m not making that name up. Even the Czech president would like people to use the name Czechia. It just hasn’t become widespread in English… yet. But I digress.

It was December and freezing cold, so when local boy Daniel suggested he take us out in the country for a day, we were sceptical. However, Daniel promised a surprise and he was as good as his word.

When we stopped at the Chapel of All Saints in Kutna Hora, we expected yet another mildly interesting church. Never did we foresee skulls, skeletons and bones – bones everywhere! Even an enormous chandelier made of all the bones in the human body.

The little one was slightly freaked out, yet oddly captivated at the same time. And that’s perhaps the most common reaction to this church – any bone church, probably – uneasy fascination.

The ossuary has the remains of at least 30 000 victims of the Black Death. The Hussite Wars a century later added to the heap of skeletons. At the request of the prominent Schwarzenberg family, Rint created various decorative objects, including the family’s coat-of-arms.

World at a Glance is a series of short articles here on Sophie’s World, with a single photo (normally), portraying curious, evocative, happy, sad or wondrous, unexpected little encounters.

Sedlec Ossuary is part of the UNESCO World Heritage site Kutná Hora: Historical Town Centre with the Church of St Barbara and the Cathedral of Our Lady at Sedlec