This morning, I’m up early, strolling around town before breakfast. Vaduz is tiny, so that’s not a particularly strenuous endeavour. Down by the Rhine, I spot an old covered bridge in the distance. 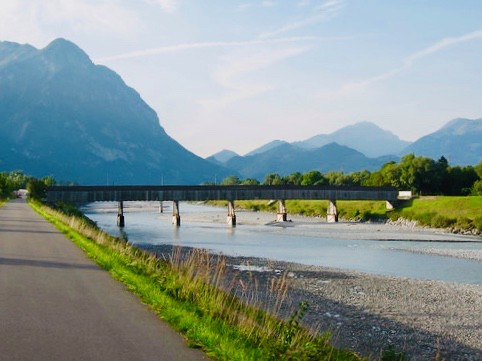 How exciting! A covered bridge! I approach with glee, taking heaps of photos as I go. 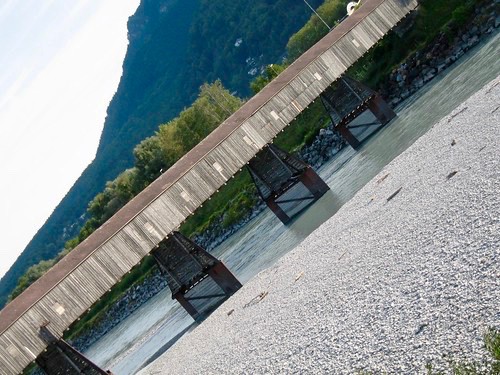 The wooden floorboards squeak slightly as I make my way through. A faint aroma of horse tickles my nostrils. At intervals, shutters afford glimpses of the Rhine floating by. It’s a wonderfully romantic bridge.

About halfway through is a double sign: Liechtenstein to the left and Switzerland to the right. This is a border bridge! On the other side, I ramble about in the Swiss village of Sevelen for a bit. 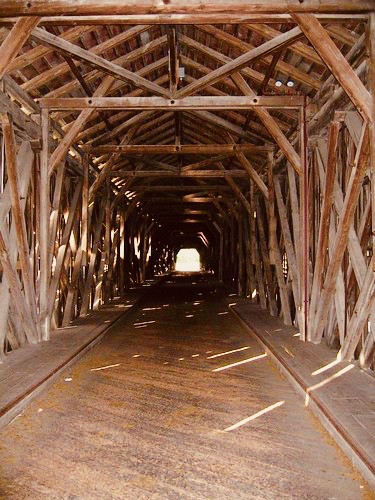 Update: See more on Liechtenstein on EuropeUpClose, including practical info. Want even more? Have a look at this article on Boots’n’All.

Update 30 July 2011: According to Wiki, covered bridges originated in Europe. The ornate, covered bridges in Italy are perhaps the most famous: Ponte Vecchio in Florence, the Rialto in Venice. But there are many more, mostly in Switzerland, it appears, but also in Bulgaria, Slovenia, Turkey, the UK. We’re off to the Cotswolds in a week, will have a look at the two covered bridges in Oxford then.

The Rheinbrücke Vaduz – Sevelen is a so-called truss bridge, built in 1901. 135 metres long, a little over 4 metres wide and was closed for motor traffic in 1975 (can’t imagine a car passing through – but then mid-20th century European cars were much smaller and lighter, of course). For more technical info on this (and other covered bridges), have a look at Waymarking.com.

As to why it’s covered… any thoughts?