Bremen: Town musicians and so much more (Day out Hamburg)

A donkey, a dog, a cat, a rooster – you’re looking at the famous Bremen Town Musicians. 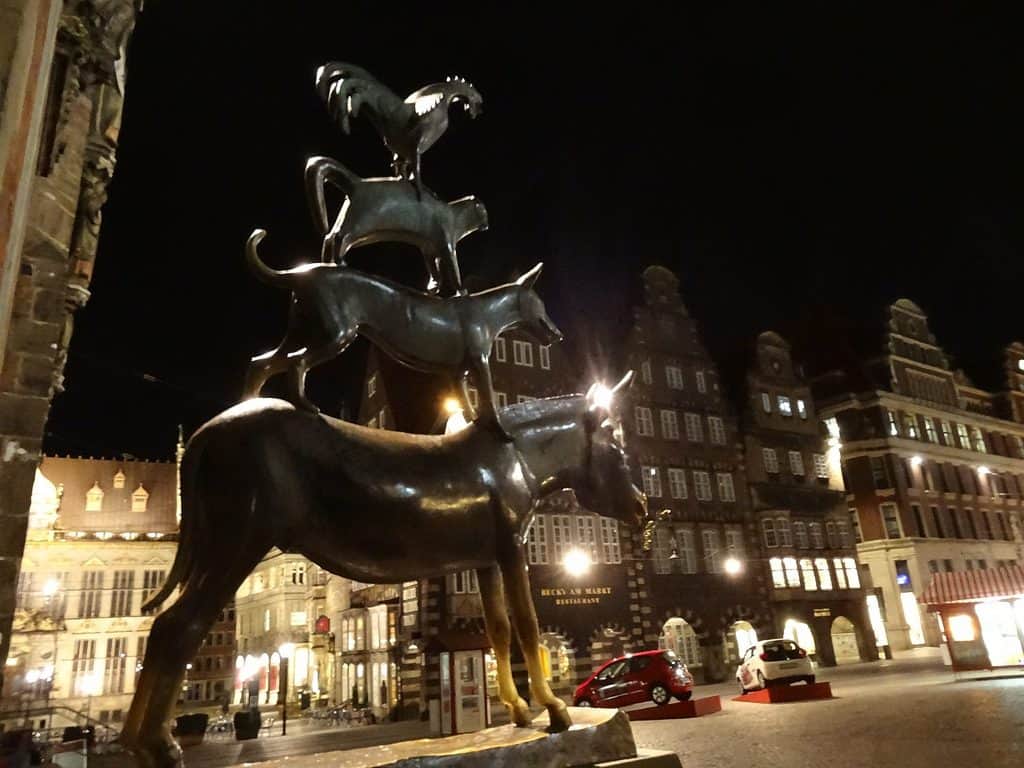 This 200-year-old Grimms brothers’ fairytale is about four friends, all a bit worse for wear and mistreatment at the hands of abusive owners. Well, nothing for it, only one thing to do: escape! But where to? ‘Let’s go to Bremen, yo – and set up as buskers’.

These four may be old and weary, but they’re not lacking in the clever wits department. On the way to Bremen, see, they encounter a gang of thieves. By standing on each other’s backs and making a combined strange noise, they outwit the crooks. They steal the (stolen) goods, eat the thieves’ food, and take over their house. Later, when one of the thieves returns to investigate, Cat scratches his face, Dog bites his leg, Donkey gives him a good kick and Rooster screams. But Thief had a different experience: a scary witch scratched his face, a man knifed his leg, a monster hit him with a club, and a judge screamed from the rooftop. It’s all about perspective.

And here they are, the four clever ones, one on top of the other, staring through the window at the thieves’ feast, forever captured in bronze by Gerhard Marcks. You’ll find it outside the town hall, near the entrance to the restaurant Ratskeller. 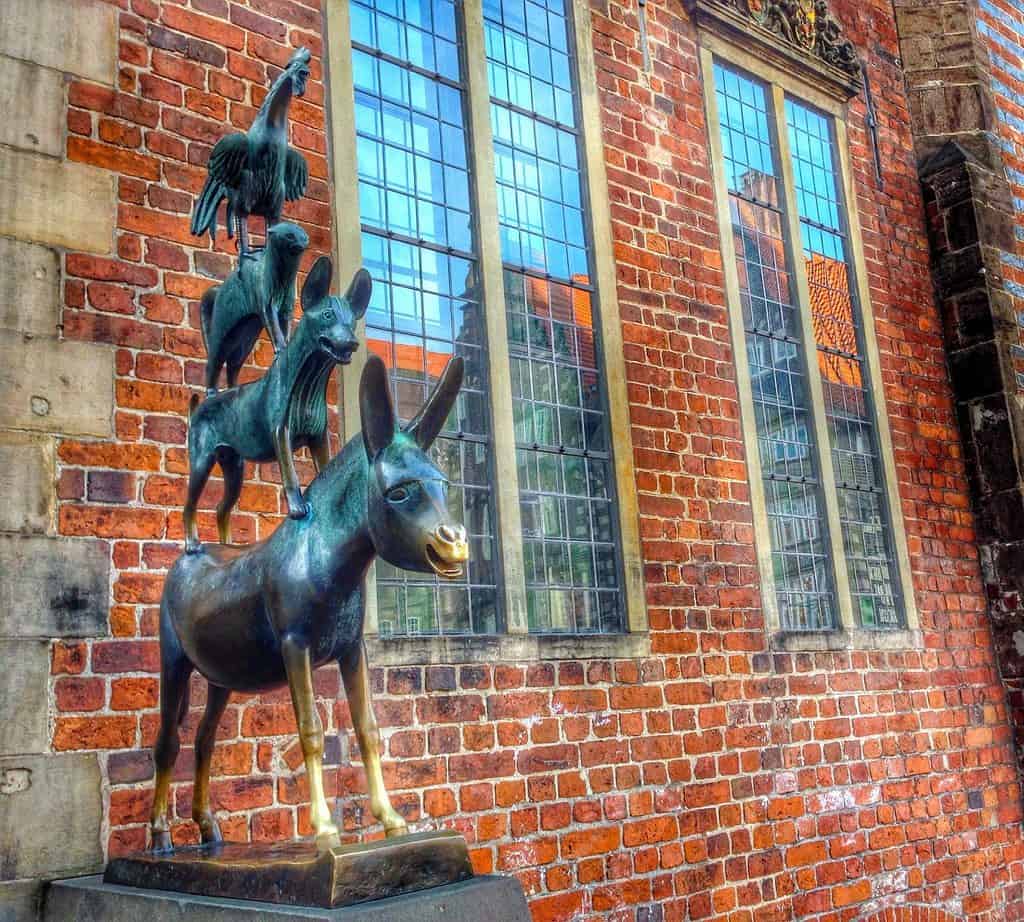 PS If you’ve seen something like this before, but you’re pretty sure you’ve never been in Bremen, you may very well have been in the Latvian capital (on a stag do, perhaps? 😉) In Riga a few weeks ago, I happened to walk past this on Skārņu Street during the golden hour: 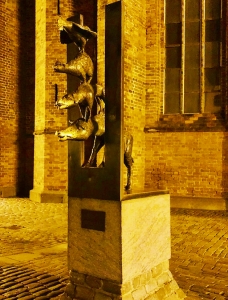 Now, these four in Riga aren’t staring at thieves feasting, but rather through the Iron Curtain and into the brave new world outside, suddenly available for the taking, after Gorbachev opened the curtain. Humorous, high level politics here. Sculpted by Bremen artist Krista Baumgaertel, this was a gift from Bremen to its sister city.

But back to the promised land. Or, at least, that’s how Bremen must have appeared to our four friends.

This Hanseatic city is of course more than a place to get your musical career started. It’s also really pretty and really cosy, so best you spend a night or two. However, if all you have is a day (and how often isn’t that the case… sigh!), it’s less than an hour away from Hamburg by train – an easy daytrip.

Like Lübeck, Bremen is sweet as. Not marzipan sweet here, but Hachez, distinguished chocolate manufacturers since 1890.

Also like Lübeck, Bremen was an Imperial Freistadt, a Free City, subject only to the emperor. But unlike Lübeck, which lost that status in 1937, Bremen has retained the title (Hamburg has, as well). Not that it means much; it doesn’t come with special privileges or rights within the German federation. But it does sound cool, doesn’t it? Freistadt!

Bremen was settled 12 000 years ago. Not many traces remain from the first 11 000 years, but the last 1 000 have left their marks. There’s plenty of history, culture and ace architecture for you to experience. I’m going to focus on the gravitas of world heritage today, namely the town hall and Roland. (Who dat, you ask? Patience, dear reader, all will become clear.) But let’s start with something lighter: 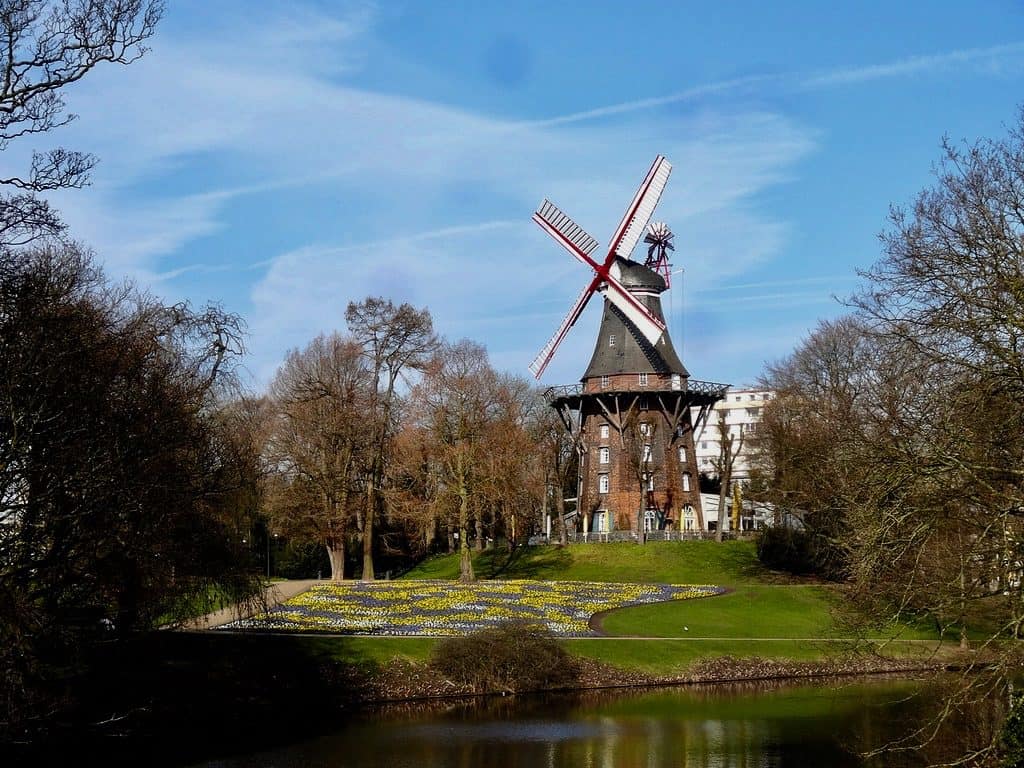 One of the first things you’ll spot as you walk from the railway station to the old town, is this quaint century-old windmill amongst the flowers in Wallanlagen Park. What a contrast to the city fortifications that once were here. Have a wander about or have coffee in the windmill restaurant. Here it is again, in the dark of night. Cosy, innit? 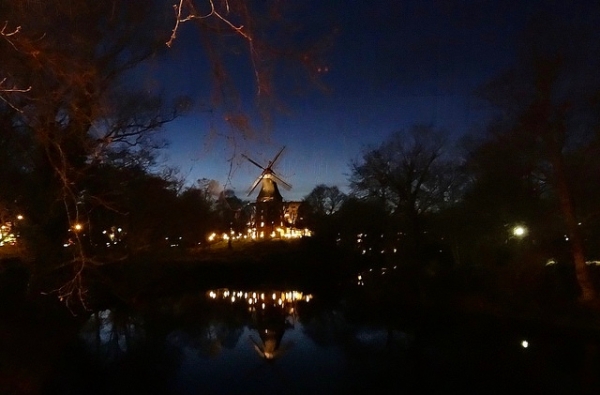 Now, let’s get down to the more serious sightseeing in Altstadt, the old town:

There it is again, the Hanseatic League. Bremen was one of the major HQs for that band of merchants and traders roaming the waters of Northern Europe back in medieval times. An old-fashioned EFTA, you could say – or even the EU, in a time when things were simpler, pre-centralisation, pre-Lisbon.

The central part of Altstadt is Marktplatz, the town square. Central, both in terms of geography and importance. This is where you’ll find the Gothic town hall and Roland, Here’s a night-time view of the town hall… 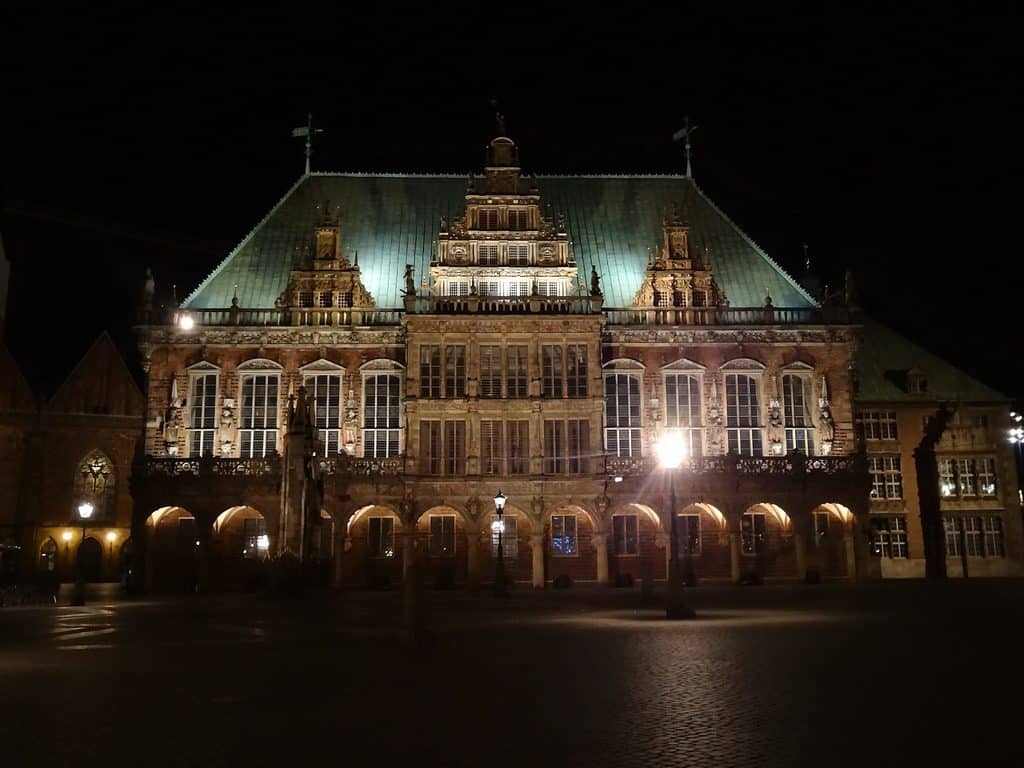 … and here’s Roland, one of Charlemagne’s 12 warriors known as paladins, tirelessly protecting the city, day and night since 1404. 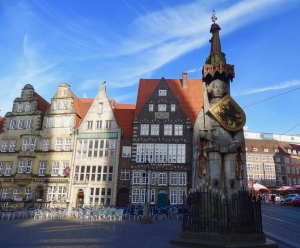 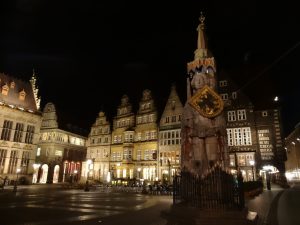 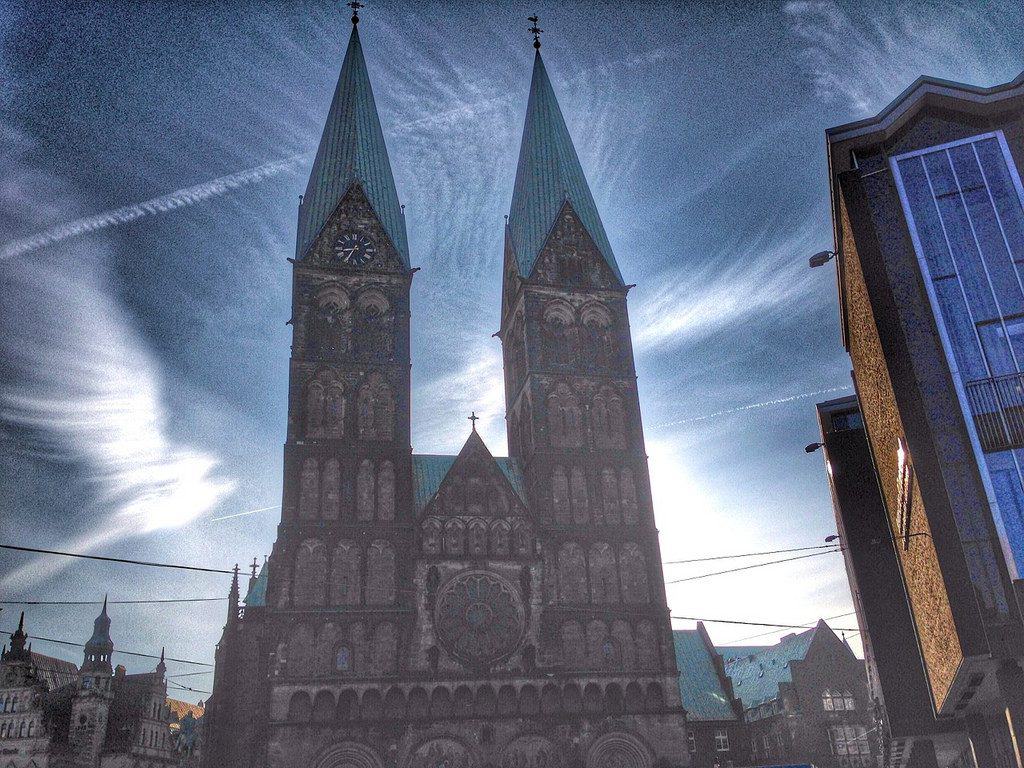 The town hall was built in the early 1400s, in a time when opulent town halls were constructed as a form of defiance against the church. Both the upper and lower halls of Bremen town hall were a few centimetres longer and wider than that of the archbishop’s palace. Councillor vs bishop. Secular vs religious power. Mine is bigger than yours. Interesting how little things have changed.

The cathedral door is gorgeous – 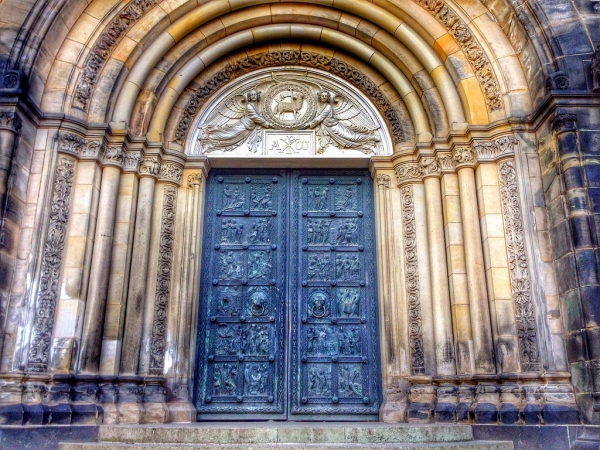 – but so is this town hall side entrance. 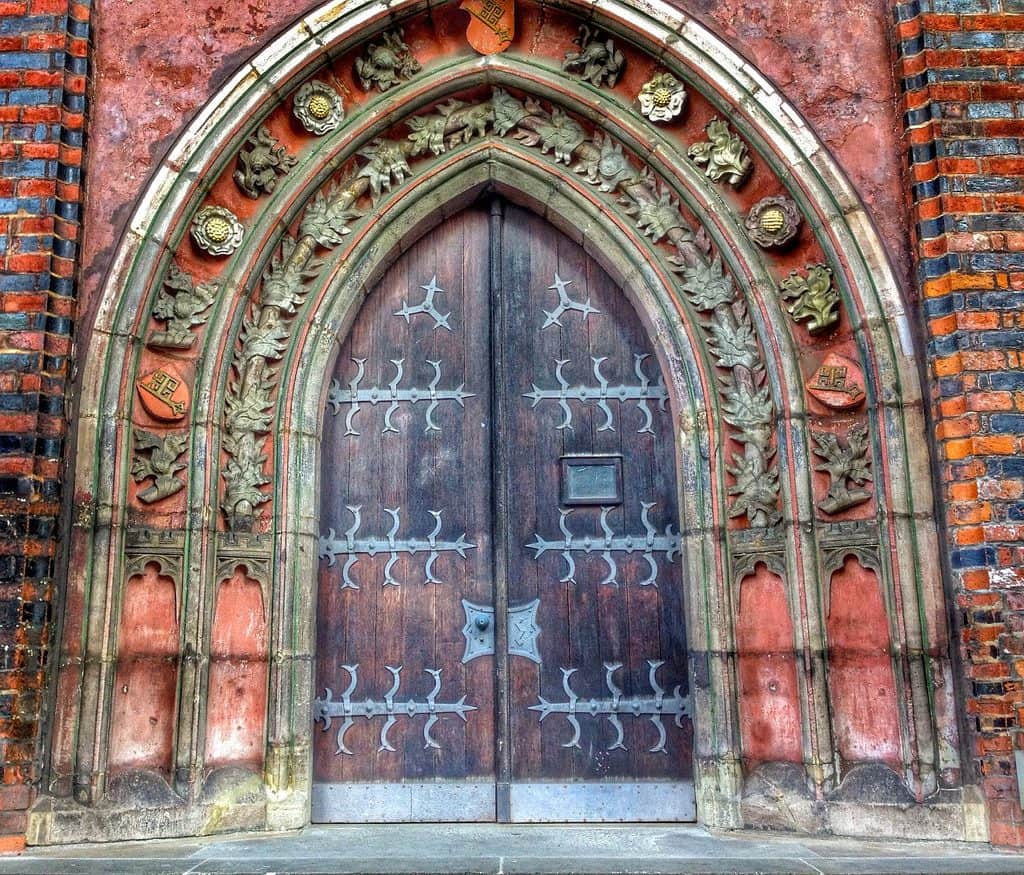 The cathedral doors are guarded by aggressive-looking lions and griffons, all Harry Potter-like – 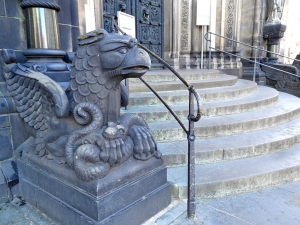 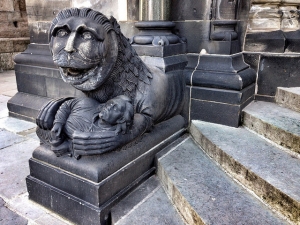 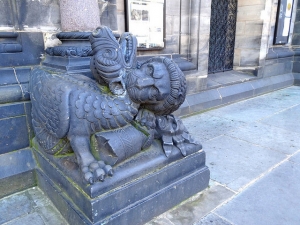 – the town hall door by a couple of muscular knights on equally muscular horses. 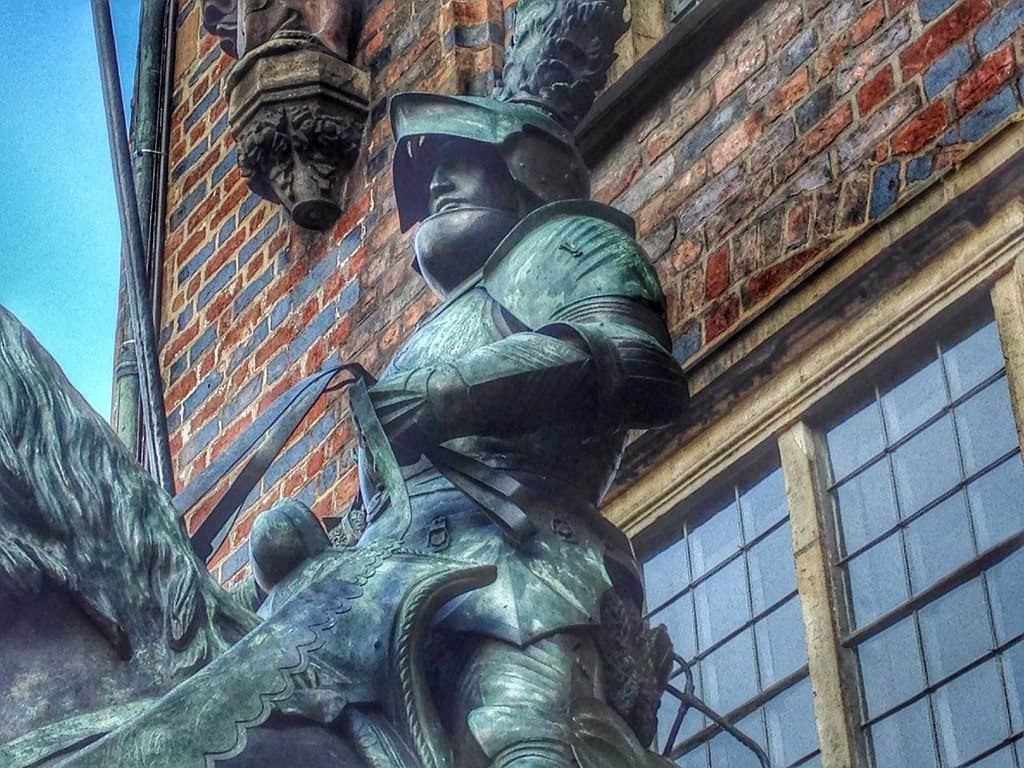 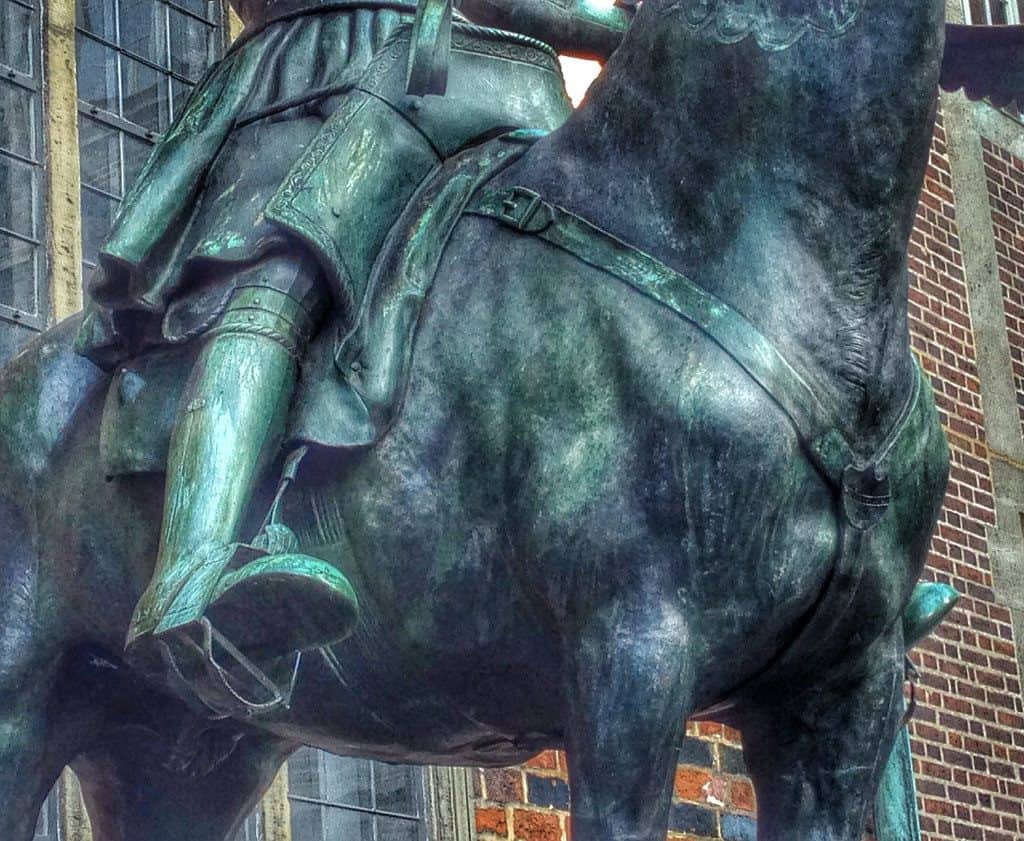 Hm, much as I like Harry Potter, fantastic beasts, and so on…

We started easy, and we’ll end easy. As you amble back to the railway station, you’ll probably pass along Sögestrasse. Soghestrasse was this street’s name in medieval times, Soghe meaning sow. Shopkeepers here thought it would be fun to remember old times and commissioned Hirt mit Schweinen: bronze piggies with herder and dog.

It might have been a pigsty once. Today, however, you’ll find high-end shops along Sögestrasse: Swarowski, Pandora, Rituals…

Another little quirk along the streets of Bremen. Feel free to sit on the pigs. Kids do. 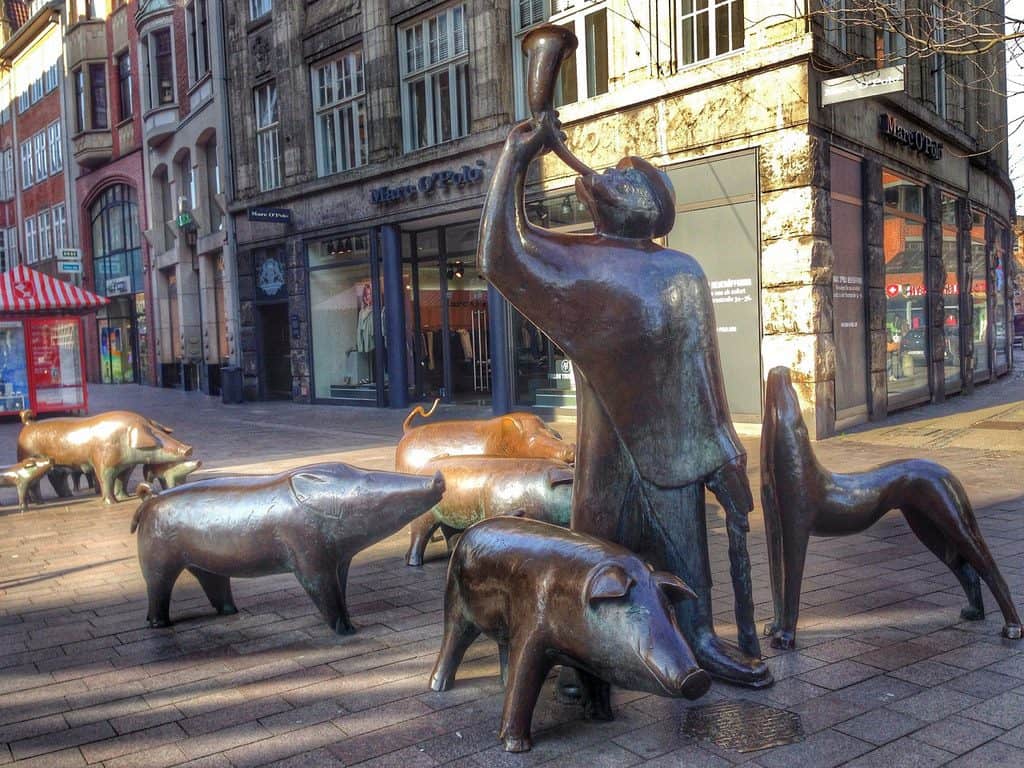