A glimpse of Brunei

Welcome to a very curious place and a lesser-known national capital: Bandar Seri Begawan. We’re in the Sultanate of Brunei Darussalam, the Abode of Peace.

I live in a relatively small oil rich country, so it’s always interesting to see how other oil-nations are similar – or different – from my own. Specifically bearing in mind that oil is a resource with limited life span. Oil reserves will eventually dry up, or made obsolete as the quest for more sustainable fuel continues.

How do the different oil nations manage their enormous resources? Are they planning for a future when oil is no more, or no longer important? According to this article in the Canadian newspaper Globe and Mail, it looks a bit bleak for Brunei. 96 % of the country’s income is from the oil and gas sector. The article goes as far as to say Brunei without petroleum seems an unimaginable concept.

So what do you think of when you hear Brunei? A tiny, rich country ruled by one of the world’s richest people, perhaps? 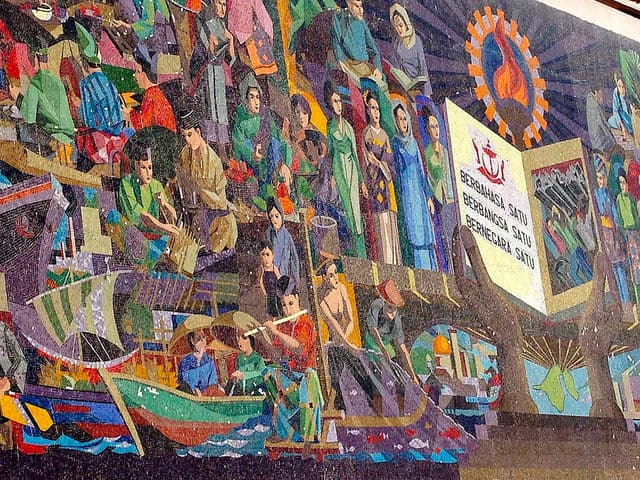 I also think of a children’s rhyme I remember from kindie: Sultanen av Brunei spiser leverpostei. It even rhymes in English: The Sultan of Brunei eats liver pâté.

Sultan Hassanal Bolkiah probably doesn’t eat liver pâté (at least not the Norwegian kind; it’s often made with pork). However, he does like to feed his people. And with a kitchen combining the best of Malaysia, Arabia, India and China, well, you really can’t go wrong.

I’m so happy to be Bruneian

In Bandar Seri Begawan, I meet up with Ahmad. He counts himself among life’s lottery winners. ‘I’m so happy to be Bruneian,’ he says. ‘We have free health care and schools for everyone.’ Other than a nominal fee – 5 dollars/year for primary school, 20 for secondary and 100 for university – school is free for Bruneians. Medical services require a 1 dollar fee for registering, otherwise it’s completely free. 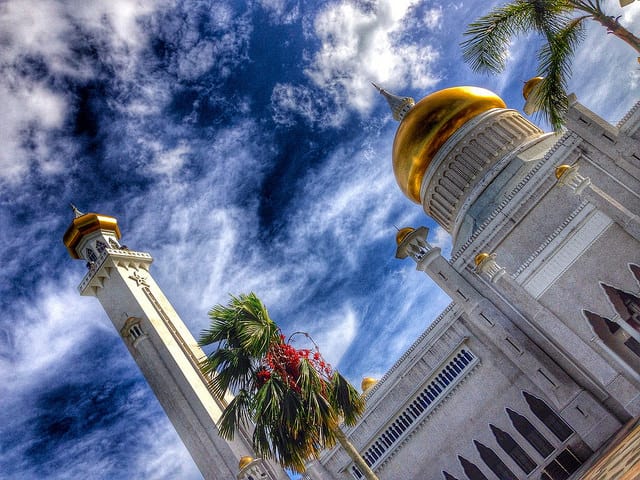 When I bring up the possibility of a future without oil, he laughs it off. Perhaps it simply is unimaginable?

And just there’s an important difference between our two petroleum-producing nations: In Brunei, there are no taxes and petrol is ridiculously inexpensive. In Norway, there are certainly taxes; petrol taxes are especially high.

Are there other differences? Brunei is a conservative society. Norway is not. Both are monarchies, but whereas Sultan Bolkiah is an absolute monarch who rules according to Islamic law, King Harald has more of a symbolic role, like his cousin Queen Elizabeth.

Similarities? Ahmad loves his sultan, and claims most Bruneians do. Most Norwegians realise monarchy is an archaic state form, yet even its most staunch opponents love Harald because he’s so unpretentious.

Differences? Like the small oil nations on the Arabian peninsula, Brunei shows off its wealth. The royal palace in Bandar Seri Begawan, the Istana Nurul Iman, is the world’s largest residential palace, complete with golden domes, and visible only from the water. In contrast, Oslo has a relatively modest and very accessible royal palace. You can walk right up, lean on the walls and pose with the guards.

Kampung Ayer and the jungles of Borneo

The most interesting part of Bandar Seri Begawan is on the water. Boats are ready to take you to the water villages and beyond. I jump into one much like the old rowing boat we have at our cabin – about 15 feet – with a rather powerful 60 hp outboard engine. 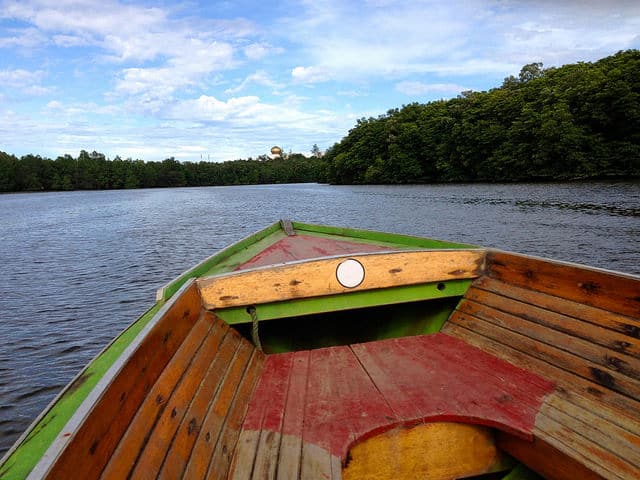 600-year-old Kampung Ayer is a large water village, just a couple of minutes across the river from the city. About 30 000 people live here, spread out over 28 communities in the inner bay. Houses are on stilts. Ahmad tells me there are 13 primary schools and one secondary school in the village.

School boats take the children around; we pass a few on the way. There are police stations, fire stations, mosques, medical clinics, community centres and football fields in the water villages. Water taxies are the major means of transportation, costing only 50 cents.

We glide through the fascinating labyrinths. 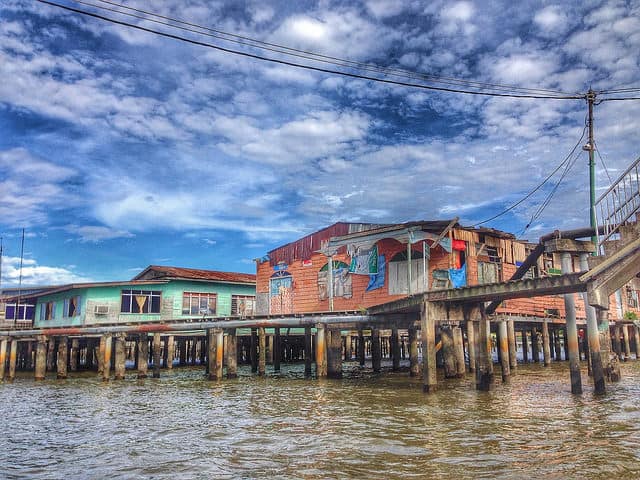 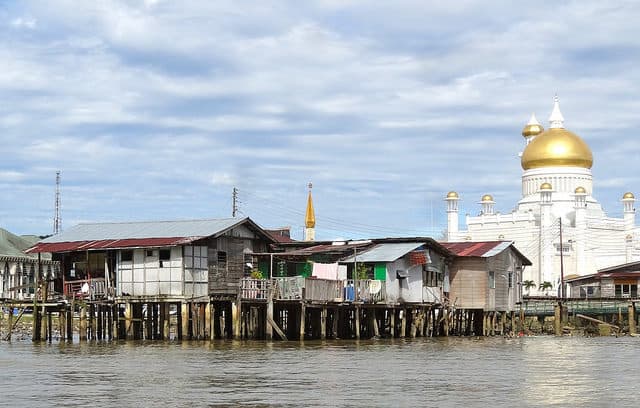 Most of the stilt houses look a bit ramshackle. Ahmad tells me they’re being renovated, and I do see a few that look more modern, better kept. 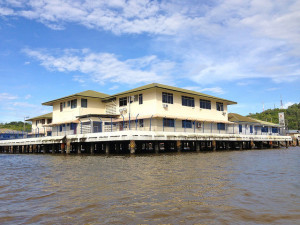 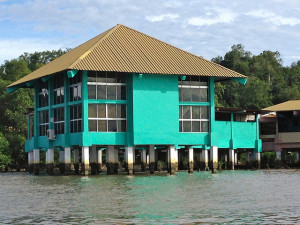 Those are nearest to town. The further out, the more traditional the houses. Soon, we pass by the largest mosque in the country, the spectacular Jame’asr Hassanil Bolkiah Mosque, honouring the present sultan, with no less than 29 golden domes shimmering. They’re made of 24 carat gold, I’m told.

I can’t help but wander about the practicals: how does 24 carat gold hold up in all kinds of winds and weather. Do the domes need polishing? If so, how is that done? And how often? Ahmad can’t tell me. In fact, he looks like he thinks I’m a bit batty for asking. Though he smiles politely. 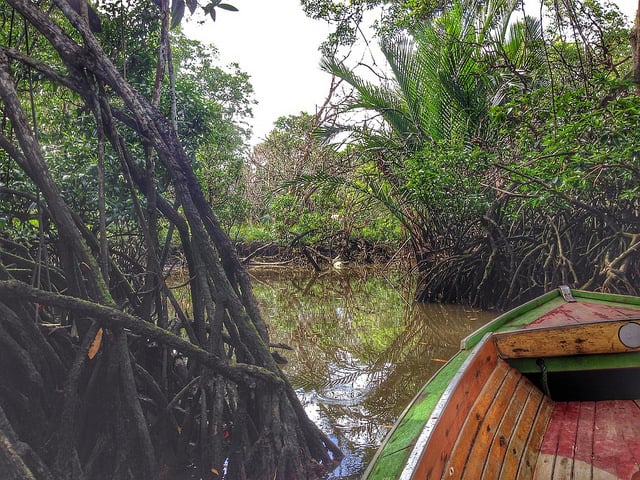 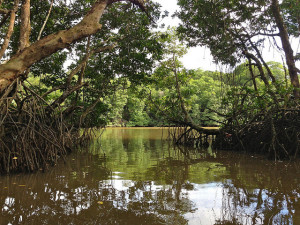 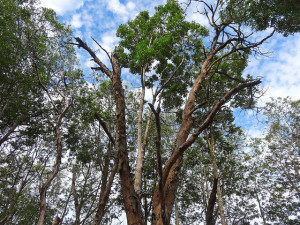 Even further out, but still close the city centre, we’re in the rain forest. I’m reminded I’m in Borneo – wild and rugged.

Along the river, I try to spot the elusive proboscis monkeys. And I do! In a tiny bay we switch off the engine and wait for a bit. There they are: one big, one small, with their characteristic noses. Up in the tree – hopping around. Too quickly for me to get a decent photo, sadly.

From the vast golden-domed palace and mosques, to life in a water village, to the wilds of the Borneo rainforest – all within just a few minutes: the variety of landscape, that’s my favourite feature of Bandar Seri Begawan.

Back on land, I wander over to Sultan Omar Ali Saifuddien Mosque, almost blinding in white marble and gold, inarguably beautiful. 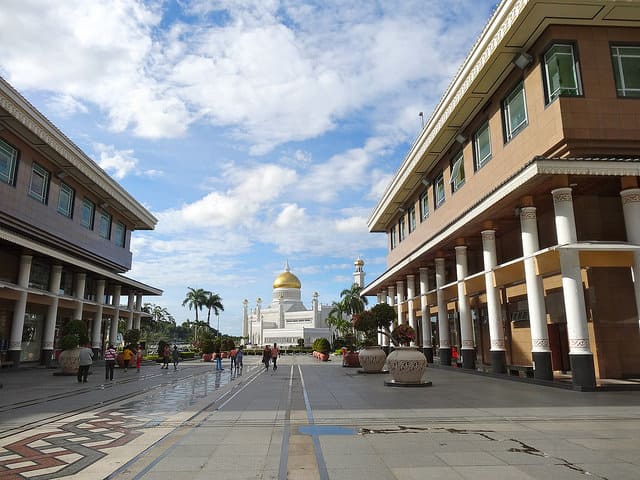 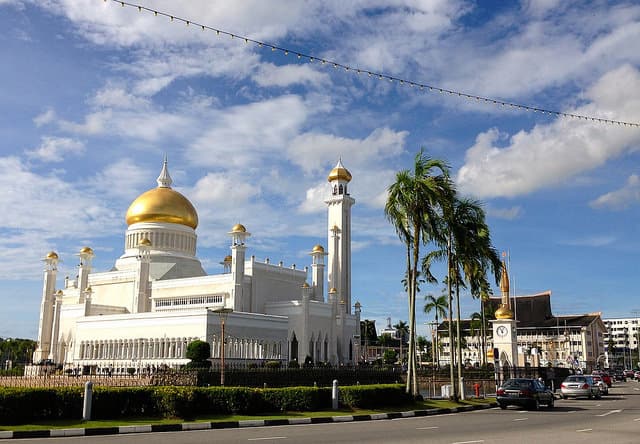 Have you been in Brunei?