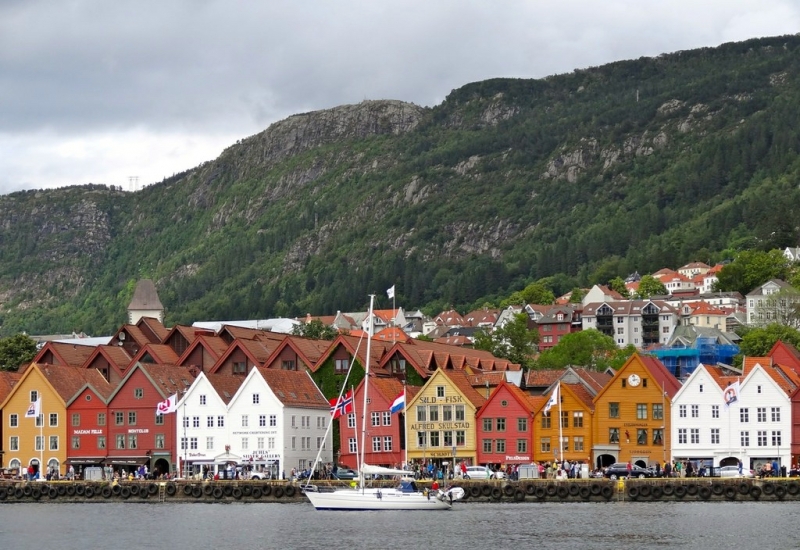 Bergen is Norway’s best known city for visitors. And although I’m a Drammen patriot, I’ll happily admit Bergen is recognised for good reason, not least for its proximity to the famous world heritage-listed western fjords.

King Olav Kyrre granted Bergen (then named Bjørgvin) city status in 1070, four years after he had seen his father, Harald of Norway, killed in battle at Stamford Bridge in Yorkshire.

Today, nearly 1000 years later, Bergen is an attractive city, nestled between seven mountains, with a lively fish market and, not least, Bryggen, which will be our main focus today. 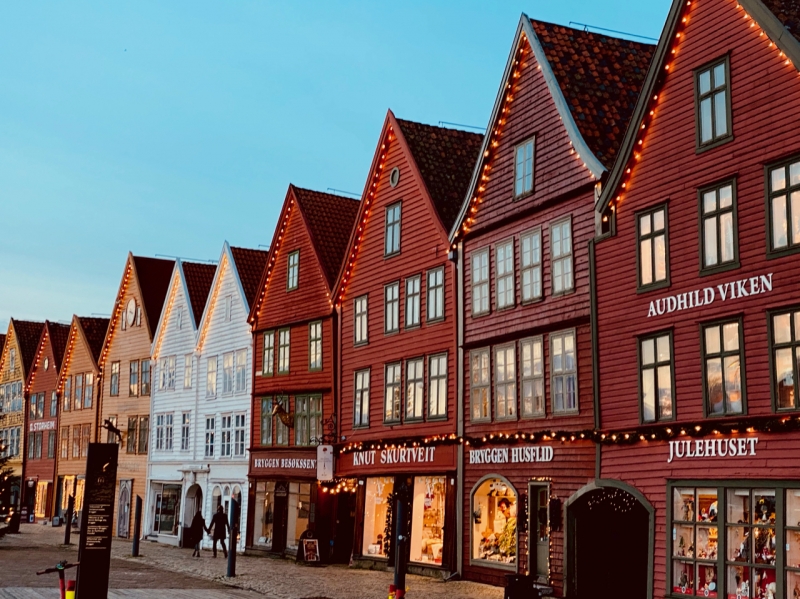 On a late December afternoon, just before sunset –

Colourful Bryggen is one of the most famous images of Norway that isn’t nature in the raw. This urban landscape, with the tall, narrow, sea-facing wooden buildings separated by narrow passageways, has been around since those early days of cityhood. We’re talking 950 years of architectural tradition here, folks. 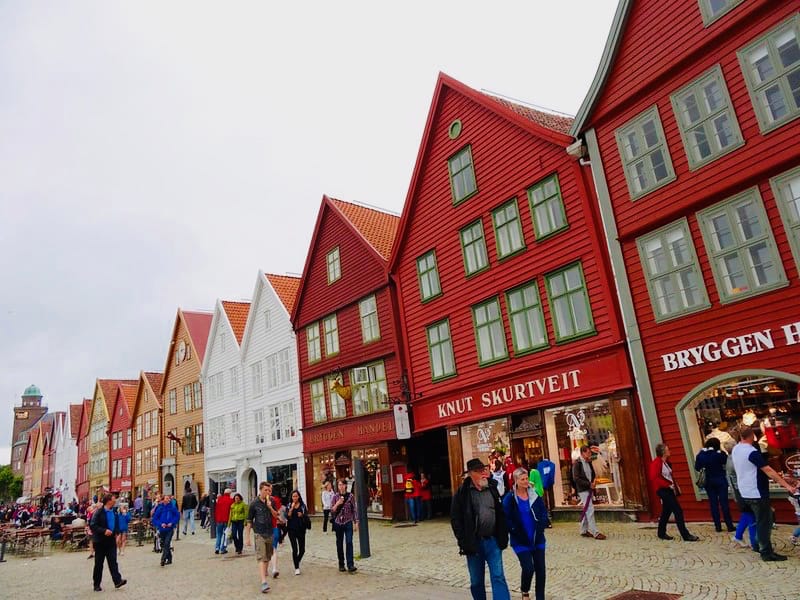 – and on a rainy day in July

Located on the North Sea, Bergen attracted German traders as early as the 1230s. And some pretty tenacious traders they were. Restrictions were many and harsh, but the Germans persevered. It took nearly 50 years before they were permitted to spend the winter here, and buy property.

Those 6 words – meaning ‘A ship arrived in Bjørgvin’ – are well-known in Norway, and refer to how the Black Death arrived on a ship from England in the summer of 1349.

That bubonic plague killed off more than half the population; one hell of a demographic shock. In the 1340s, half a million people lived here in this mountainous land; 150 years later, a mere 200,000. The population did not recover until the 17th century. This had enormous economic and political implications: an independent, spirited kingdom was reduced to an unwilling province of Denmark for centuries, a period known as the 400-year night. All worthy of a blog post on its own. But that’s for another day. 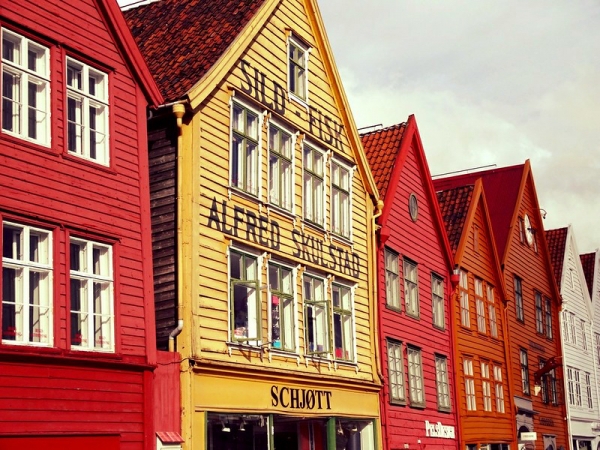 Why am I talking about the Black Death? Well, besides being a poignant reminder of the plague we are all currently living with, it serves as a segue to the Hanseatic League. Readers of this blog will remember I’ve mentioned this powerful guild of merchants more than once.

In the mid-1300s, after the plague, the League founded one of four foreign trading posts, Kontore, here in Bergen. The other three were in Novgorod, Brügge and London. The Hanseatic merchants had monopoly on the lucrative trade in stockfish (dried cod), and they had trading partners providing capital and credit.

The Hanseatic society was very well organised (they were German, after all). It was also strictly hierarchic (again…).

Young boys came in as stabenjungen (house servants). After 3 – 4 years, they advanced to schutenjungen (loading and unloading ships). Later still, after passing exams in business, product knowledge and maths, came the opportunity to advance to gesell (the owner’s second in command).

The Hanseatics lived in a separate quarter of the city, with their own school for the boys. They were not allowed to marry, and not allowed to socialise with locals, women especially. They spoke German, were their own jurisdiction, and prospered here for centuries. Bryggen was essentially a ghetto of foreign merchants.

Bryggen (meaning The Wharf), also known as The German Wharf and The Hansa Wharf. Notice the loading cranes?

At the visitor centre, you’ll find heaps of useful and intriguing information, including this model of Bryggen of old. As you can see, there’s much more to it than the postcard facades. The rows of houses go back 115 metres to Øvregate (Upper Street) behind.

The buildings are typically double, and were used as combined living quarters, trade depots, and warehouses.

Plank covered passageways separate the buildings, narrow in front near the docks, and wider towards Øvregate in the back; real estate was at a premium nearest the harbour (nothing is new under the sun). Today, these alleys house museums, little art galleries, shops selling traditional crafts, jewellers, textile designers, pubs and cafes. 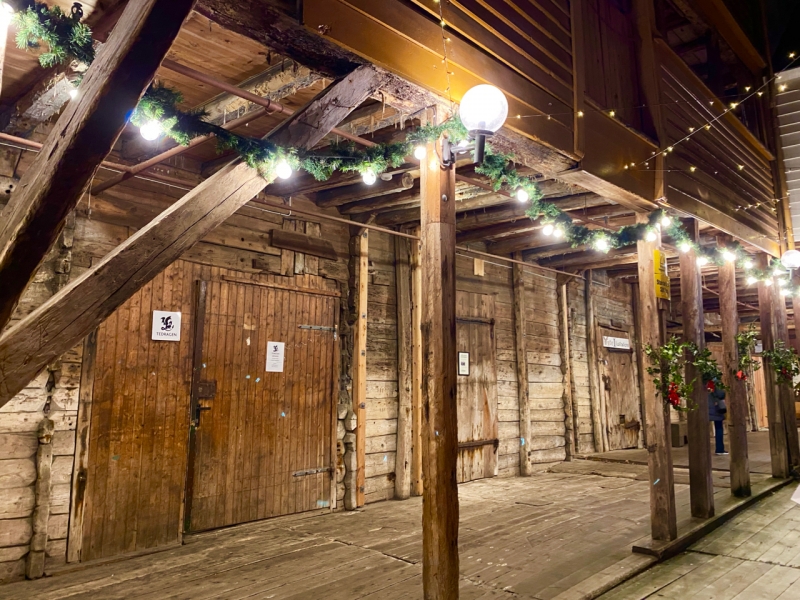 Stepping back in time: a Bryggen passageway with balconies above. 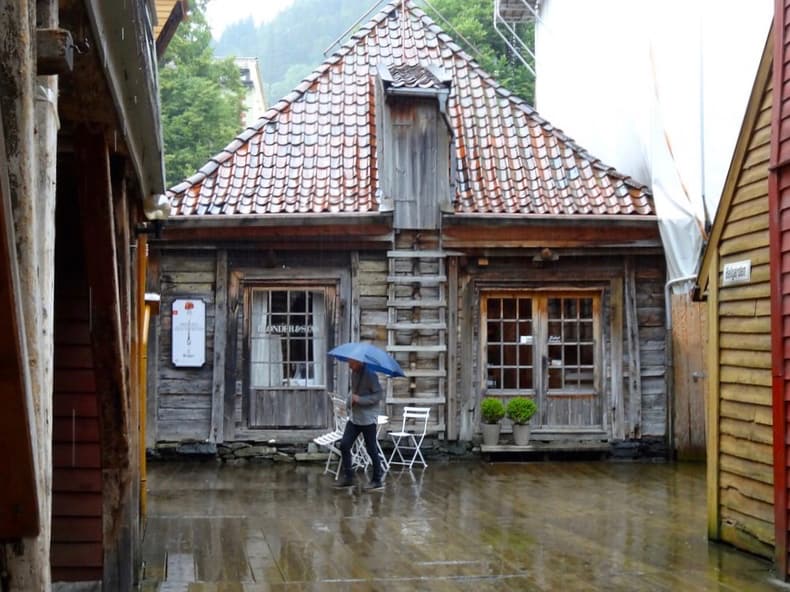 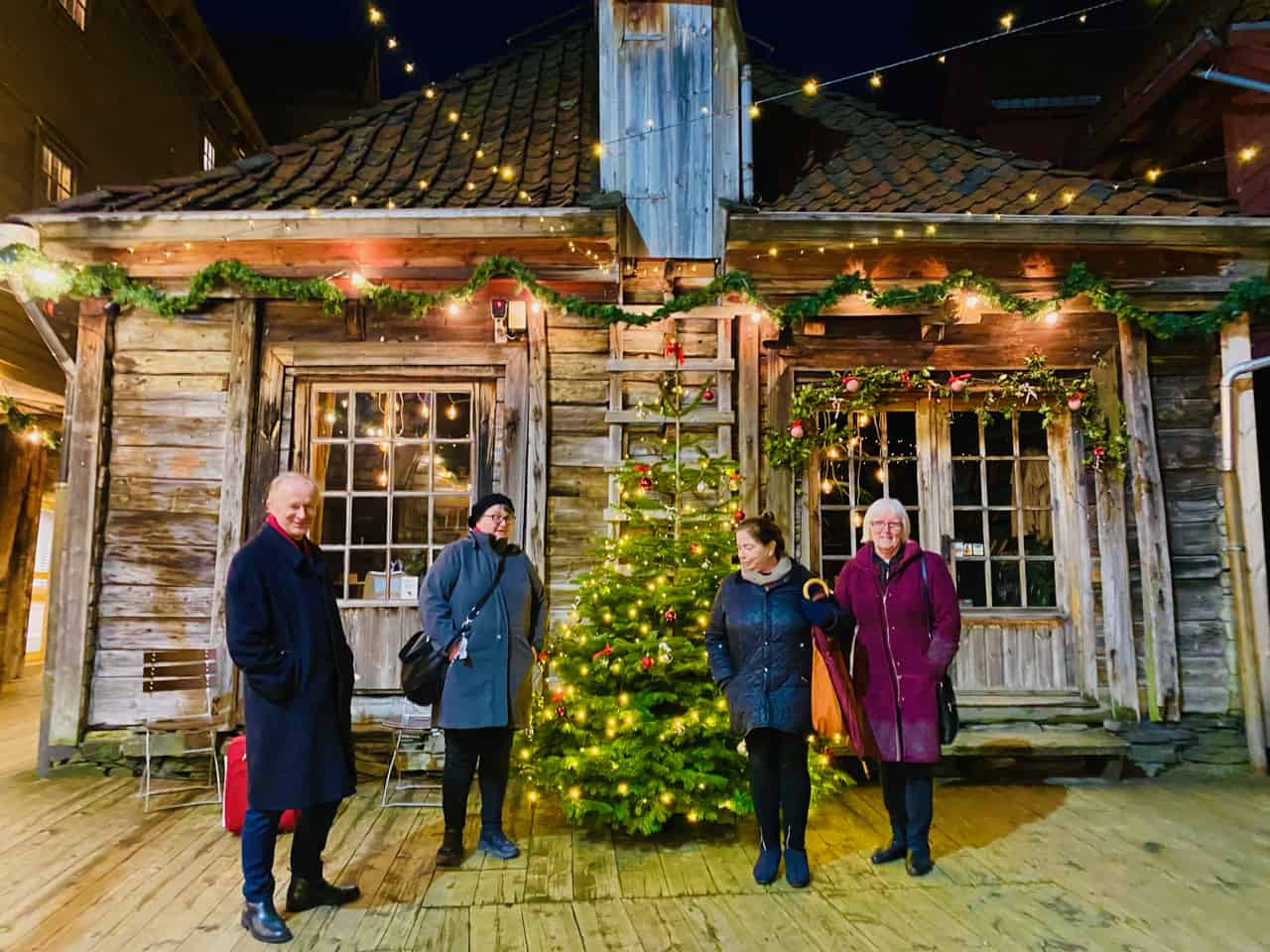 Further along inside: rain in July, and all decked out for Christmas in December. 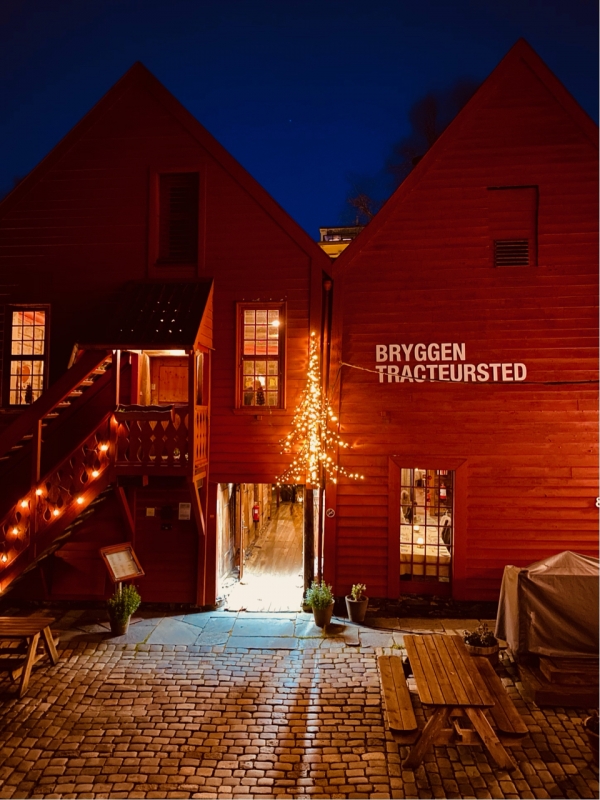 Christmas-cosy alley towards the back 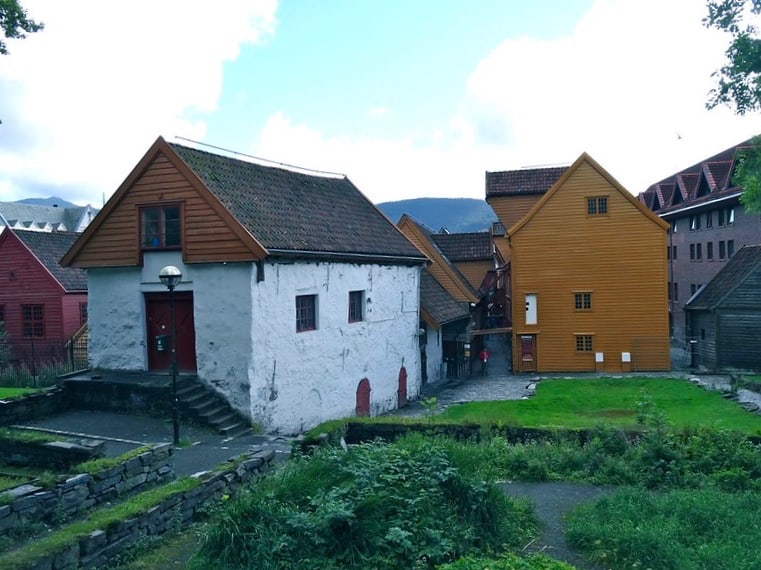 Summery views. Bryggen seen from the back, at Øvregate.

Bryggen has suffered fires at least seven times over the centuries. In 1702, the entire city of Bergen was burnt to the ground, and the characteristic wooden houses you see today, are the ones rebuilt after that devastation. In the 1900s, more fires struck. So did other disasters: on 20 April 1944, a munitions ship exploded in Bergen harbour, blowing off roofs and tilting everything. An old photo at the visitor centre shows how Bryggen looked after the explosion: 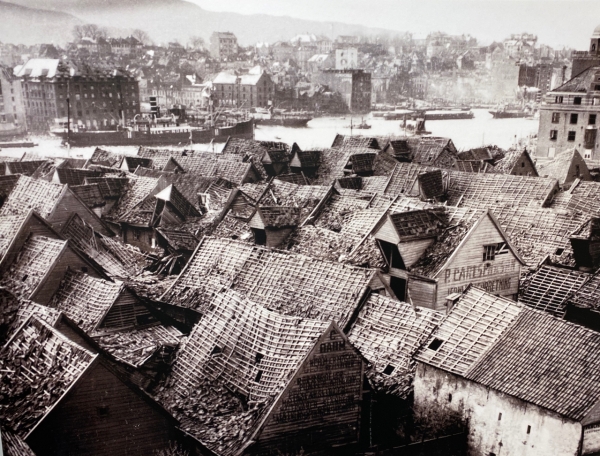 Quirky fact: As Bryggen was such an important reminder of Germany’s glorious trading past, German occupying forces helped reconstruct the buildings after the explosion in 1944.

Today, only 61 buildings remain, all listed and legally safe from demolition and alterations. But it was touch and go: In 1927, Bryggen received protection under the Cultural Heritage Act. However, in the mid 1900s, the area was in shambles: houses falling apart, taken over by homeless people and disease-carrying rats.

Furthermore, in 1955, just 11 years after the explosion in the harbour, another fire ravaged Bryggen. And who was to say that would be the last? 3 out of 4 residents wanted the whole area levelled to the ground to make way for new, more usable houses. Blocks of flats were planned, as was a shopping centre and a bus station.

Conservationists had their work cut out for them. In 1962, the association Friends of Bryggen and Stiftelsen Bryggen (Bryggen Foundation) were established, and sense prevailed. Bryggen was restored. 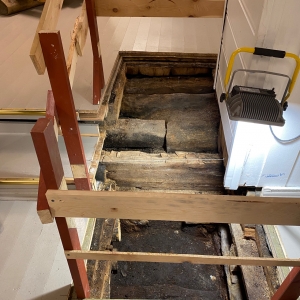 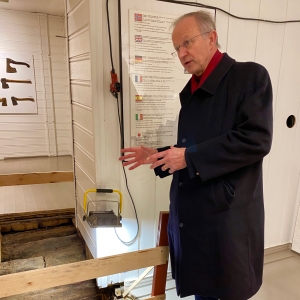 Kim showing one of the ancient stone cellars.

To preserve the ancient wooden urban structure, restoration work after the last fire has been – and continues to be – faithful to the old ways. The crafters must be familiar with old techniques and know how to use traditional tools. 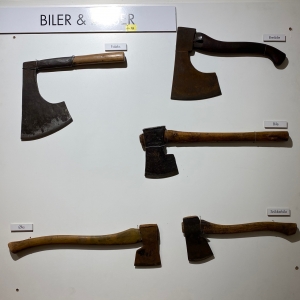 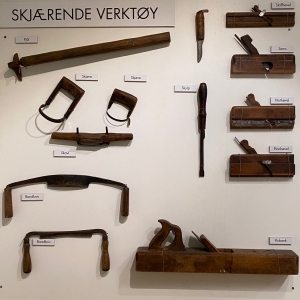 Today’s crafters use the same type of tools as those used when Bryggen was rebuilt after the fire in 1702.

Inside a Bryggen house – 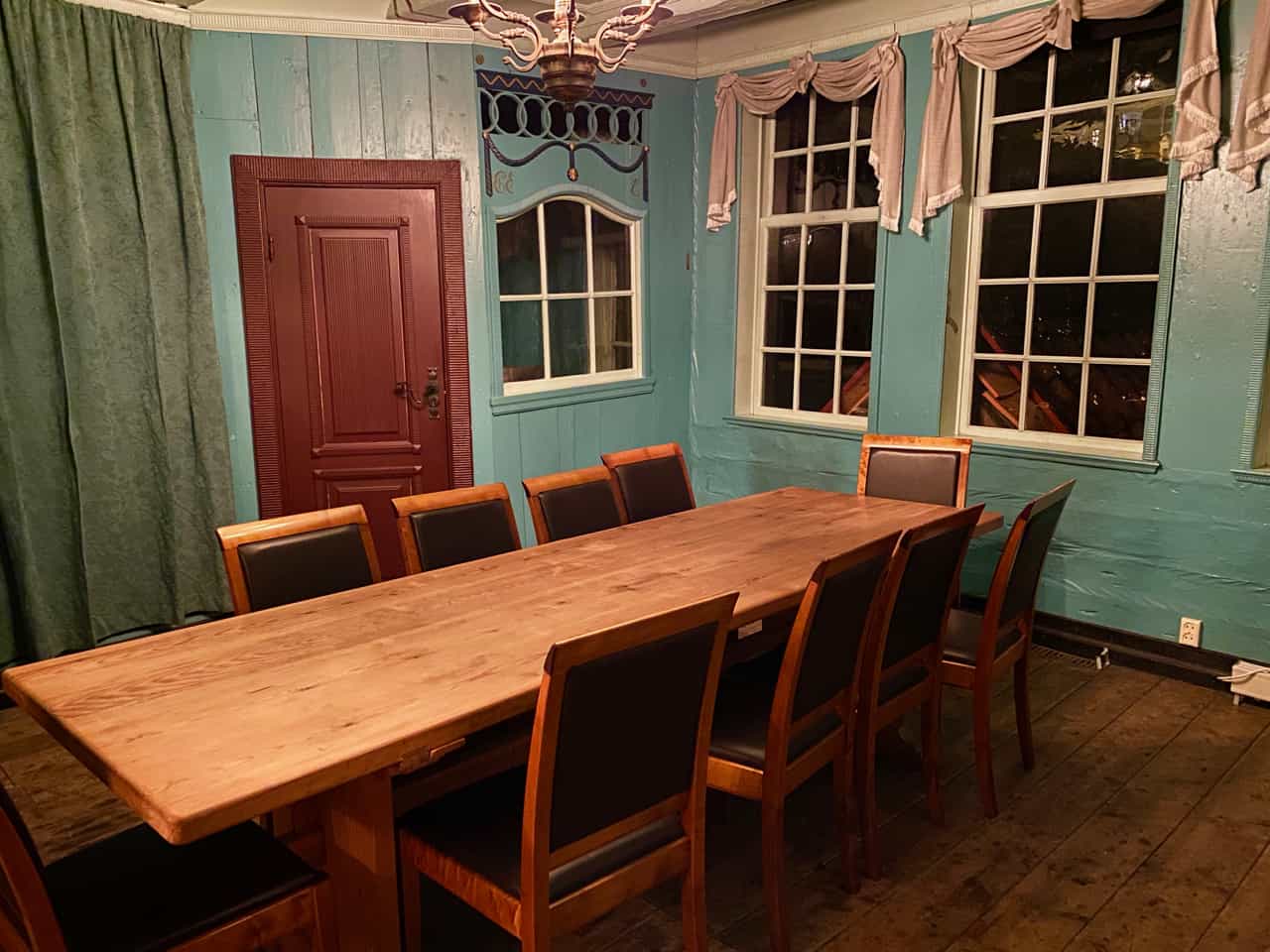 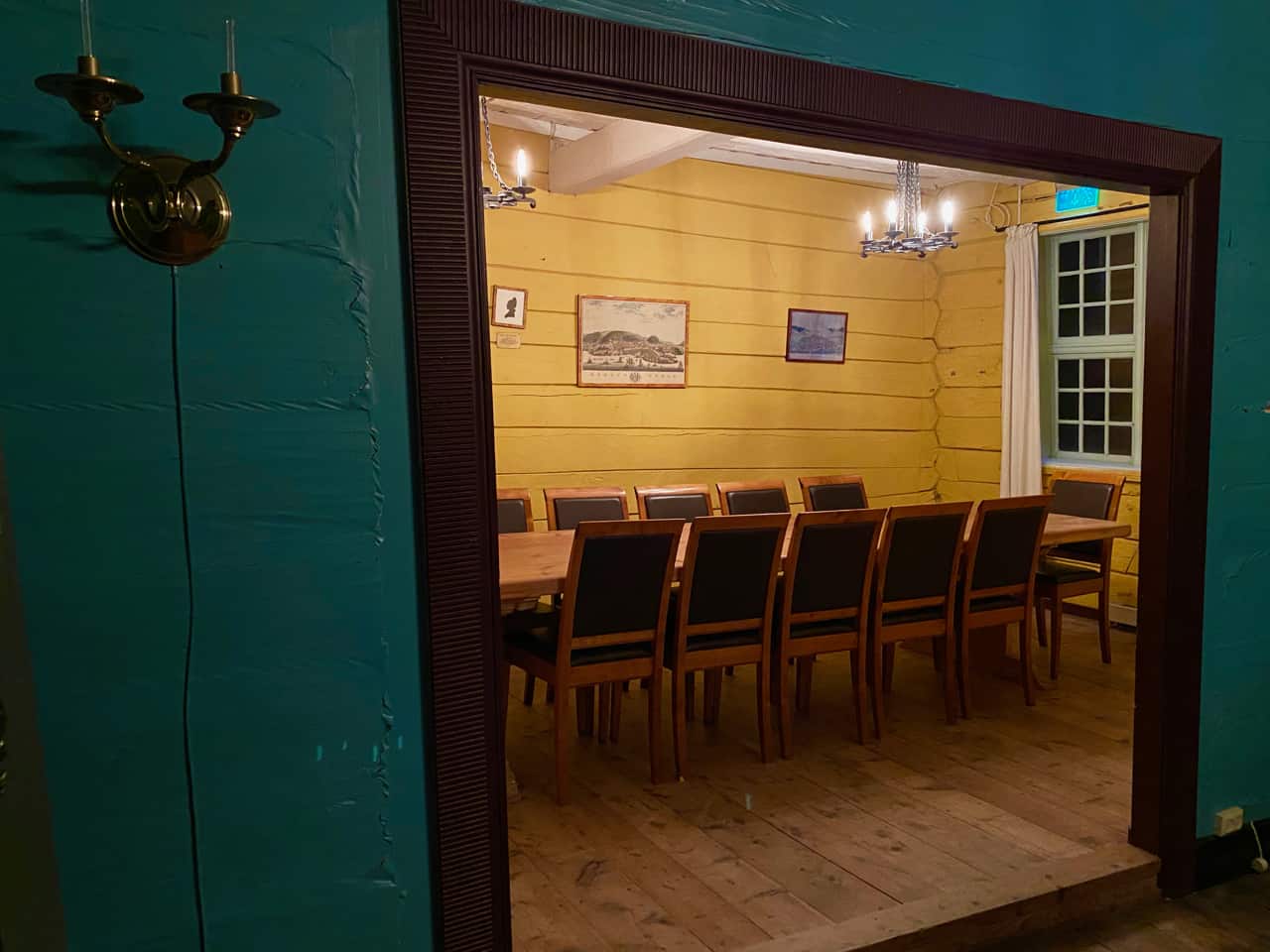 – outside on a summer day – 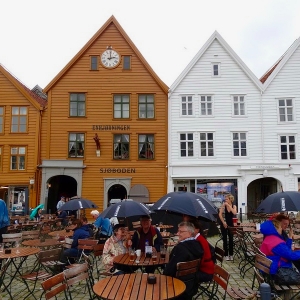 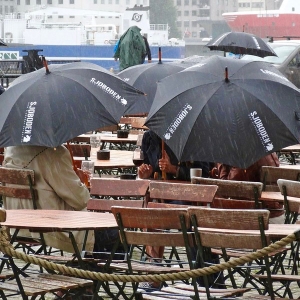 In a city with 231 annual rainy days, well, you can’t let that stop you from enjoying a beer outdoors, can you. Smart restaurateurs provide umbrellas for their customers.

– and back in December at blue hour, just before dark 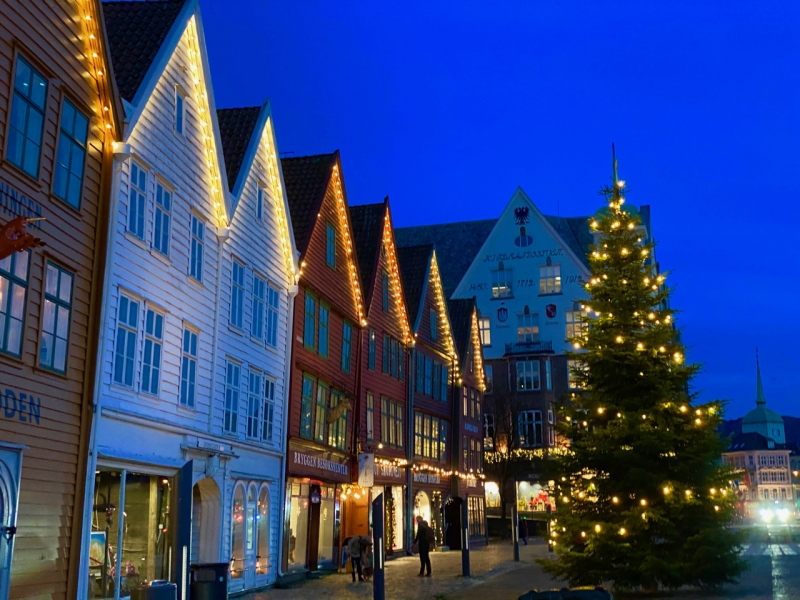 There’s more to Bergen than Bryggen, of course. Here are my top three Bergen things to do completely unrelated to the Hanseatic League. 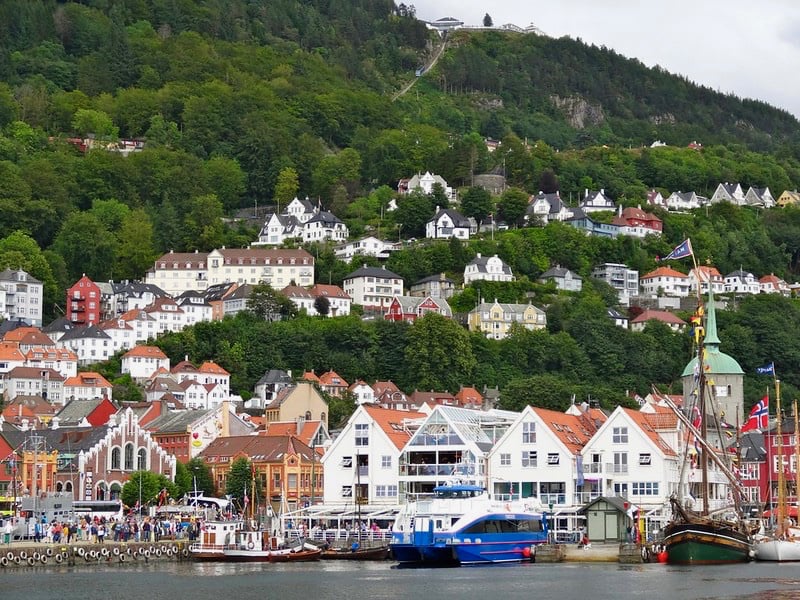 Fløien Folkerestaurant on top of Fløyen there, can you see it?

2. Bergen Aquarium: the penguins are a highlight, if you have little ones along. 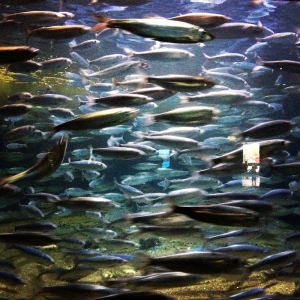 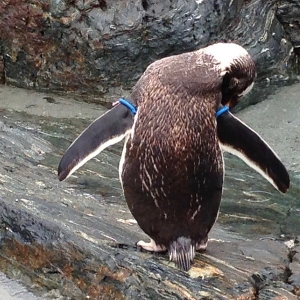 3. Fisketorget (The Fish Market): Bergen is a gastronomer’s delight, with everything from the sea as specialty. Try one of the seafood restaurants at Bryggen, or grab a snack at Fisketorget, just across the street from Bryggen. 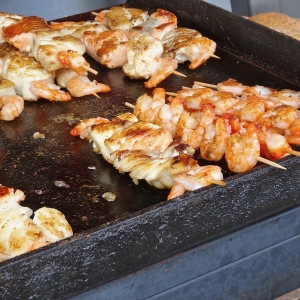 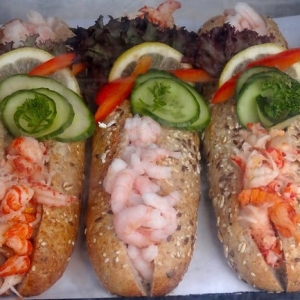 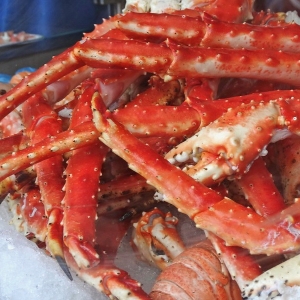 A tiny bit of the selection at Fisketorget

4. Bonus I: Honourable mention goes to Restaurant Wesselstuen, a Bergen classic, where I used to hang out as a young ‘un, a few decades ago. It looks just the same, and I’m wondering, if some of the waiters removed their face masks, I might recognise a few. Meat and fish feature heavily on the menu. However, I’ll recommend the vegetarian option, nut roast with pureed Jerusalem artichoke. Delicious! 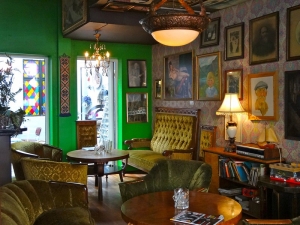 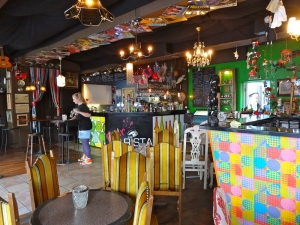 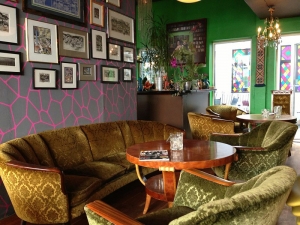 5. Bonus II: Another favourite of mine: Bar Barista, relaxed, friendly, atmospheric art cafe/pub. Good selection of local craft beer, coffee, lunches and more. How does waffles with brie, peanuts and maple syrup strike you? (It works, trust me). Local hang-out with a great DJ at night. Love the funky interior, so much to gaze at, quirky surprises wherever you look, a veritable Aladdin’s Cave. All round cool and cosy mood here. In Øvregate, less than 1 minute walk from Bryggen. 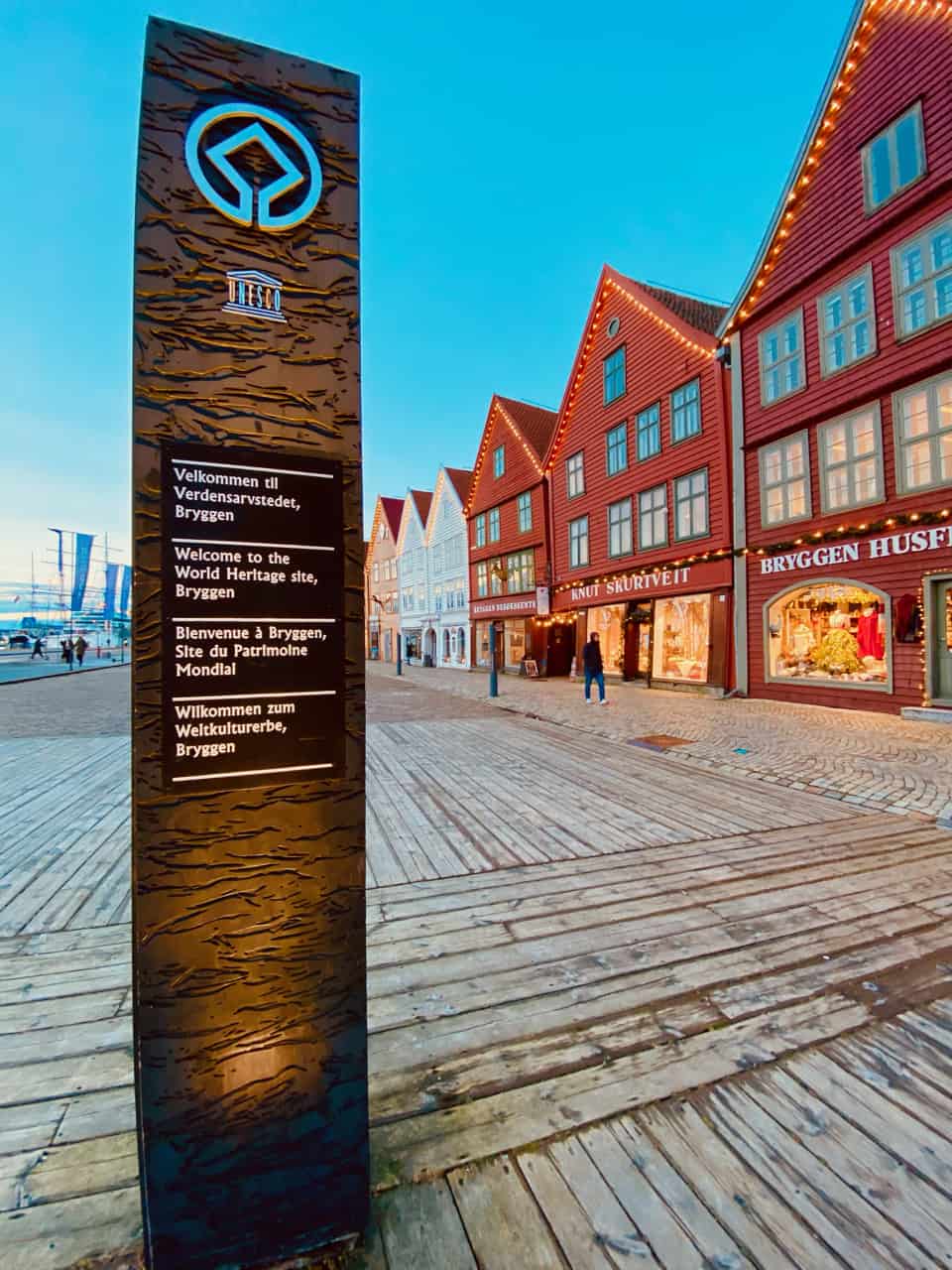 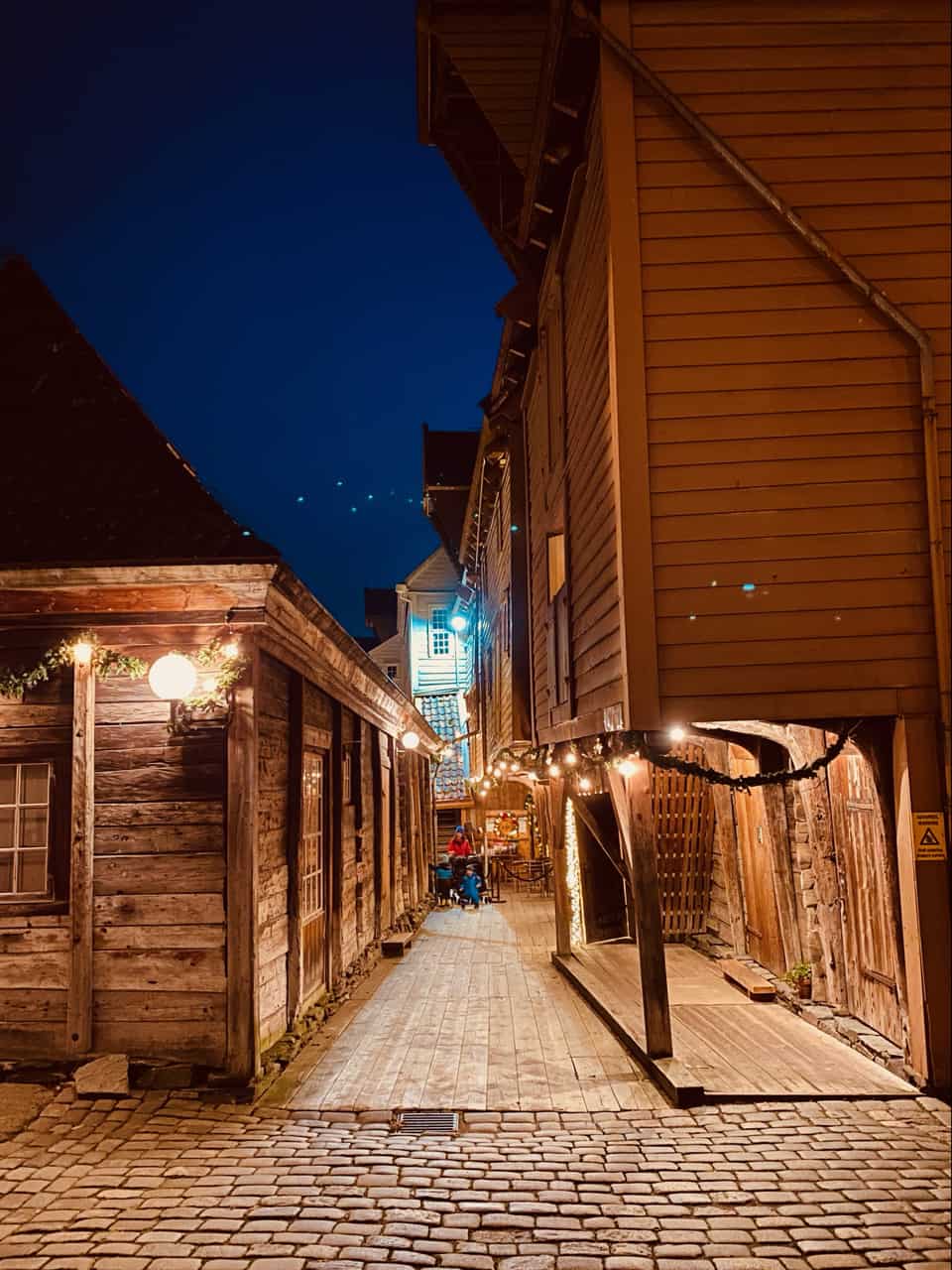