For more than 75 years, the charming Cafe de Paris in Geneva on 26 Rue de Mont-Blanc, a 45-second-walk from Cornavin, the central railway station, has been a local institution. And it’s still going strong, despite – or perhaps because – it only has one item on the menu: Entrecote Café de Paris avec les pommes frites et la salade verte for 39 SFr. 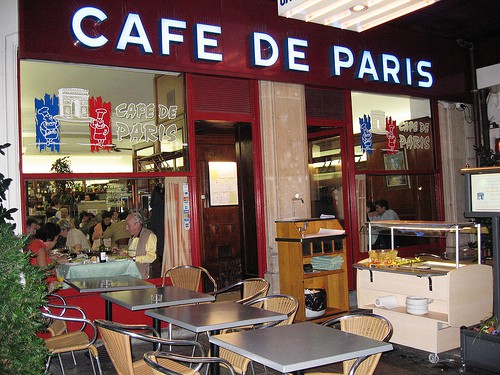 Your choice at Café de Paris is whether to have your entrecote medium or saignant. Every once in a while someone, usually a tourist, orders his steak well done. And that’s OK. The waiters are too polite to comment. Bear in mind that well-done here means you still have to work hard to keep your steak from jumping up and down on the plate. With the extra large cutlery, you should be fine, though. The forks can easily be used as weapons. Take care not to stab yourself inadvertently in the throat – from the inside.

Café de Paris is like a French bistro with red leather sofas, wood panelling and mirrors. The tables are so close together, you could pinch thin, crisp frites from the next table without being noticed. Very intimate, very cosy. Efficient white-shirted waiters, many of them well into their 60s, deftly manoeuvre gas burners and sizzling steaks between the tightly packed tables.

Here’s the thing. I don’t really like meat. I never eat steaks – except here. Whenever I’m in Geneva, I’m simply drawn to Café de Paris by some unseen magnet. It’s very weird. And like some wild carnivore, I devour blood-dripping steak that has barely kissed the grill. How is that possible? Must be the herb-butter sauce that’s bubbling all around it. The secret recipe, created by the proprietor’s father-in-law, Monsieur Boubier, in the 1930s, has remained unchanged. In his book The Last Days of America, Paul Erdman states that Café de Paris has the best entrecote sauce “of any eating place on earth”.

As always, the place is teeming with laughter and lively conversation in every language. Geneva is home to the UN after all. Everyone is busy chatting, except me. I’m on my own in the midst of people I don’t know, and will likely never see again in this lifetime. Shamelessly, I listen in on everyone’s conversation; taking notes even.

The clientele is never dull. Two elegantly dressed Genevois women in their 70s sit at the next table. We wouldn’t have to move an inch to greet each other with air kisses. Not that we do. They’re so busy with their mobile phones, they hardly have time to order. Elsewhere, a crowd of diplomats are discussing a Palestinian delegation. A man dressed like Liberace enters with a teenage boy. An elderly gentleman is enjoying his after-dinner cigarillo while reading the newspaper. He keeps looking at a picture ad for Lisa, mostly undressed, who’s only “too happy to satisfy your every request”. A man and a woman, both 60ish, look like they’re in love. They seem to be planning a trip to Cuba and she is lecturing on Che Guevara. It’s wonderful!

The air is ripe with the scent of meat, sizzling, spicy butter, discreet perfume, ripping matches, the slightly yeasty scent of a Pinot Noir – and smoke. All around me people are smoking. Café de Paris is not for you if you need a lot of personal space. Nor if you can’t stand the scent of Gauloises and smoke in your eyes with dinner. Here’s another thing: I kinda like my space and hate smoke. Yet I adore Café de Paris. Go figure!

This article was originally published in Boots’n’All in March 2007. When I was last in Geneva, in January 2010, Cafe de Paris was delightfully unchanged. However, as of 1 May 2010, Switzerland introduced a law banning smoking in public spaces, including restaurants.