After my recent re-visit to Cape Town and the Cape Peninsula, I’ve a series of posts coming up. I’ll cover a cheetah, lion and rhino rescue project and Hout Bay – another self-declared micro-nation. I’ll talk about the infamous prison at Robben Island and a thought-provoking visit in a township. I might even say a word or two about Cecil Rhodes and his garden. But let’s start with the easy bit: stunning nature. 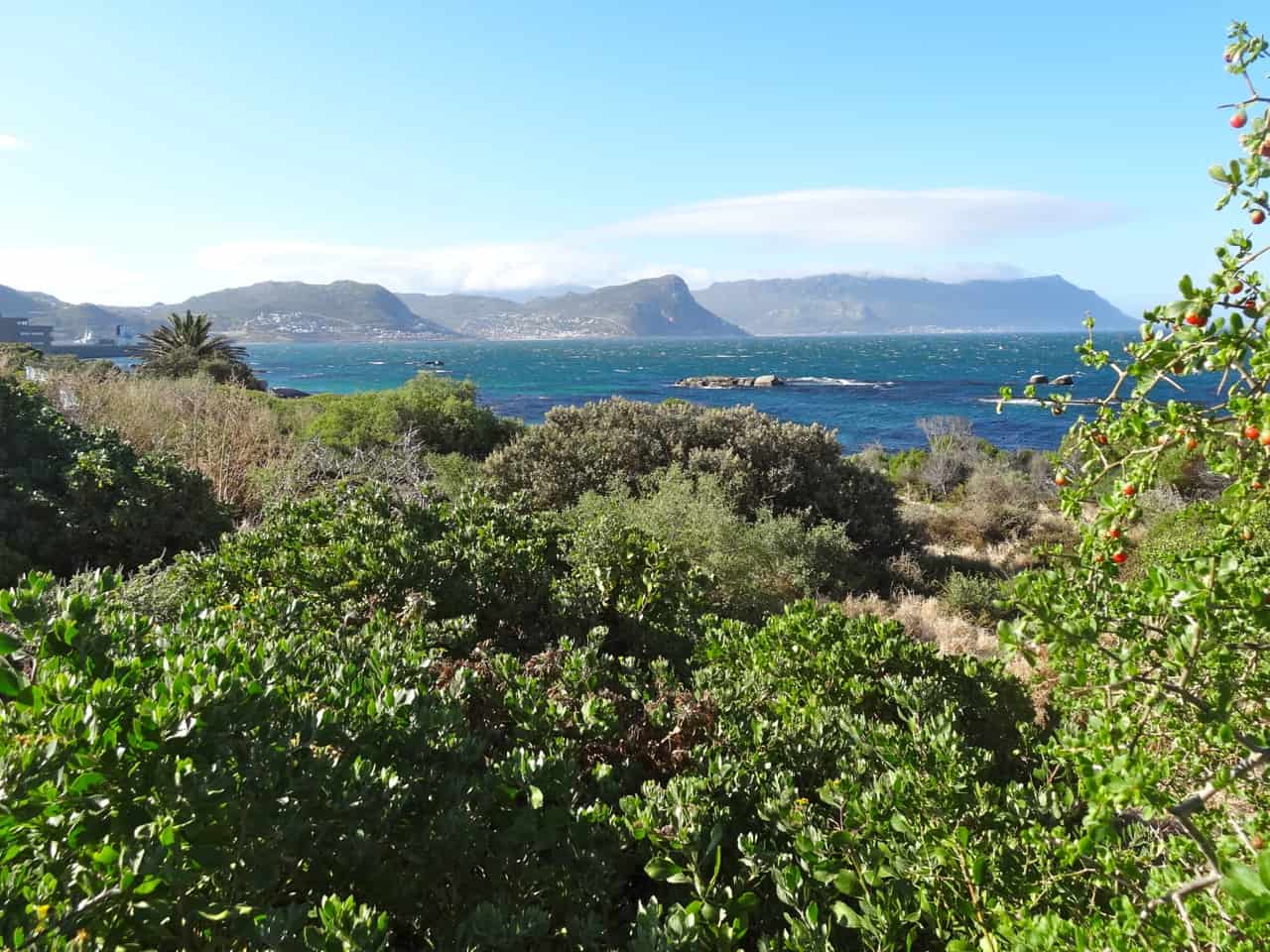 Cape Town probably has one of the most beautiful settings of any city on earth, rivalled only by Rio de Janeiro. If you’re in town for more than a day or two, do get out on the Cape Peninsula to see it all from different angles.

The legendary Cape sits at the tip of the peninsula, making it Africa’s most southwesterly point. It’s not the southernmost point, that honour belongs to Cape Agulhas 150 km away. However, as is often the case, the geographic extreme isn’t always that dramatic. This is the case at Europe’s northernmost point (Kinnarodden in Norway) and also at Cape Agulhas. Thus, the more spectacular rocky headlands of North Cape and Cape Point get all the attention. 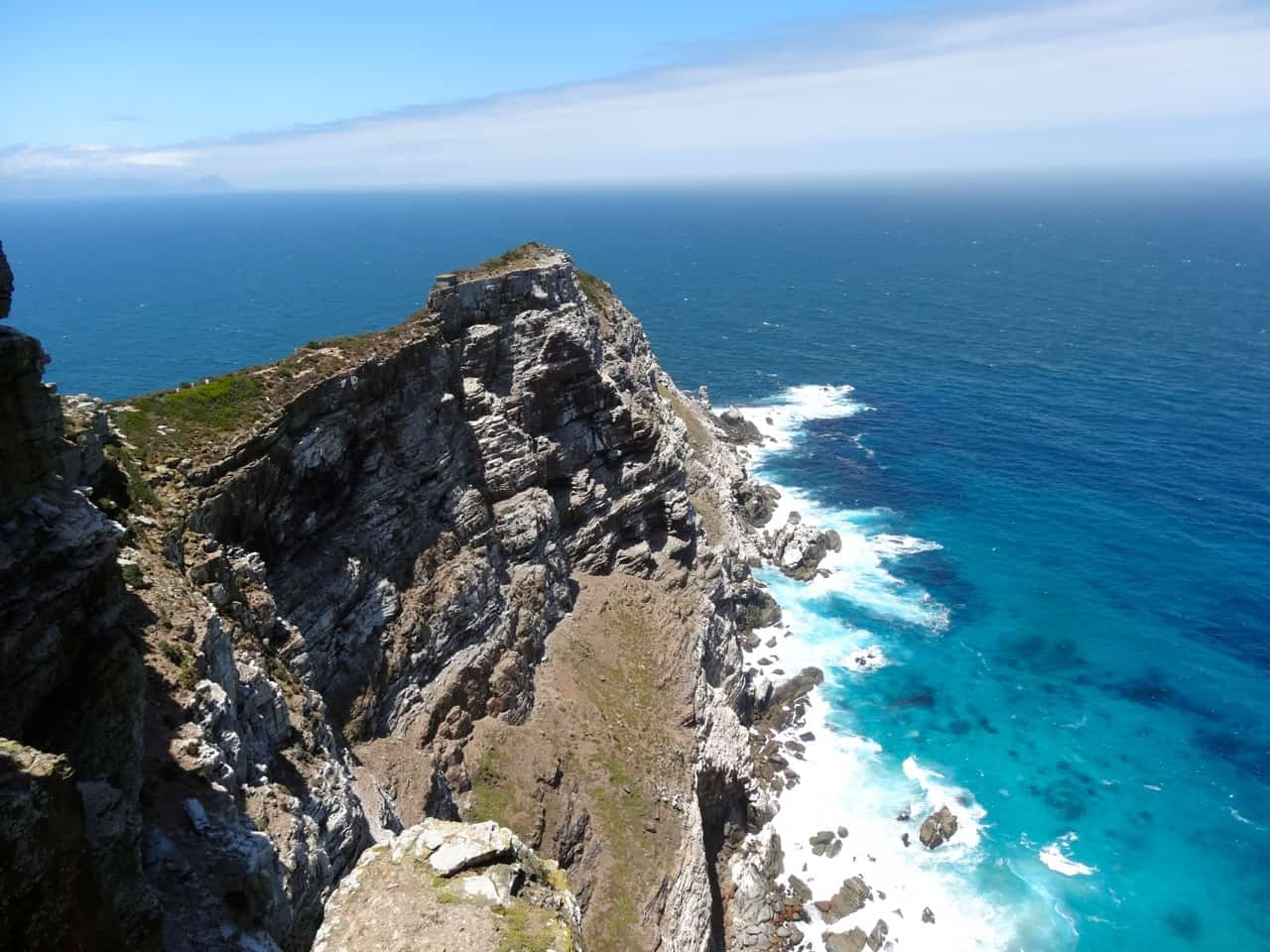 Somewhere between Cape Agulhas and Cape of Good Hope, the Indian and Atlantic oceans meet. Seas are rough here, and Portuguese sailor Bartolomeu Dias, the first to round the Cape, named it Cabo das Tormentas, Cape of Storms. His king would have none of that and renamed this headland Cape of Good Hope. Best to be optimistic… 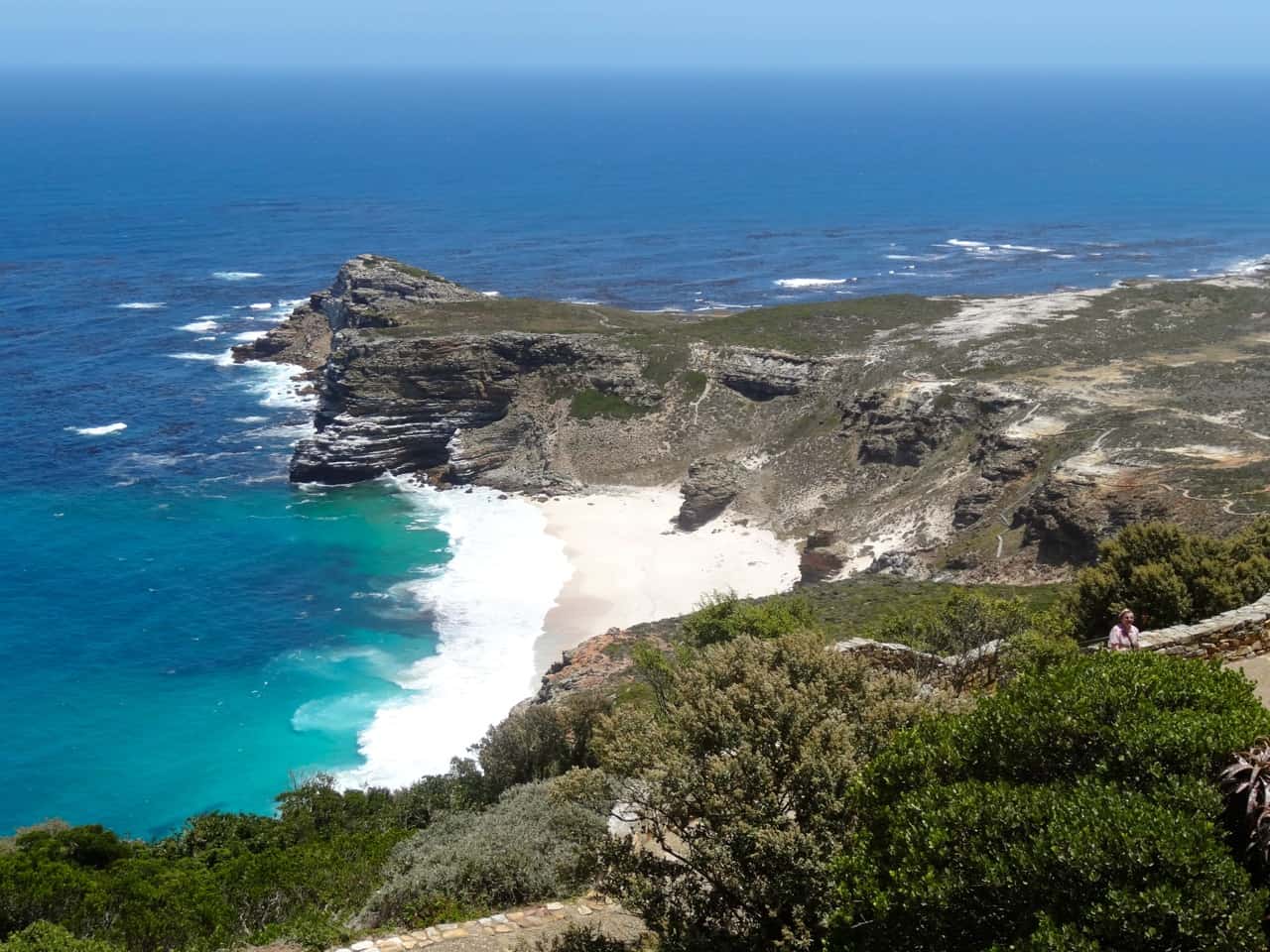 At the top of Cape Point is a light house and a marker signifying just how far you are from home: 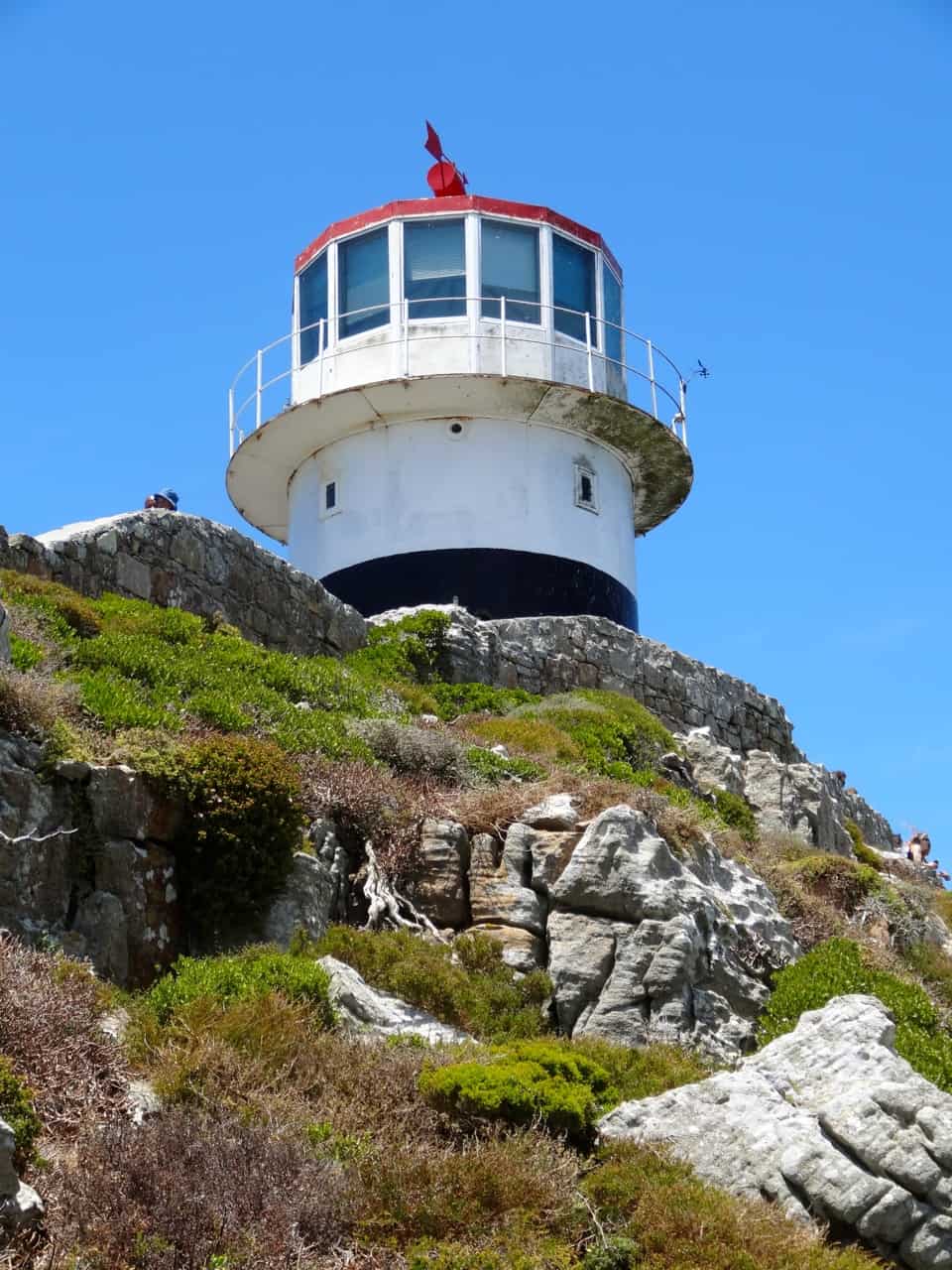 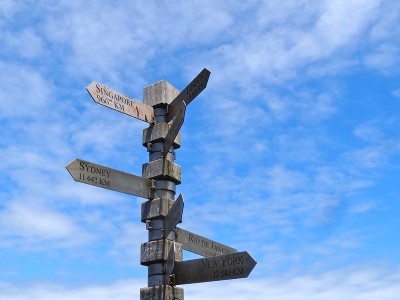 The Cape Peninsula is part of Table Mountain National Park and is one of eight areas which together form the UNESCO World Heritage site Cape Floral Region Protected Areas, one of the richest areas for plants in the world. 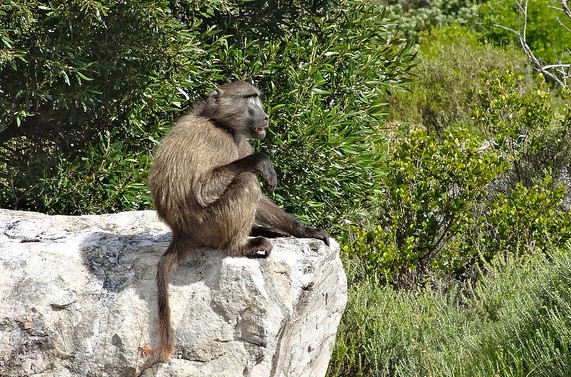 Just as abundant is wildlife, notably the famous, or perhaps infamous, Chacma baboons. Last time I was here, it was early evening and the baboons had taken over the parking lot. They pulled at my clothes and climbed into the car and were generally a bit intimidating. Too much like humans, perhaps – humans without inhibitions.

This time I spotted signs everywhere warning of dangerous baboons, but most of the day they were nowhere to be seen. In fact, I felt lucky to finally spot a few along the road, not at all aggressive. According to the South African Parks Department, the baboons are critically endangered. Much can happen in 20 years… 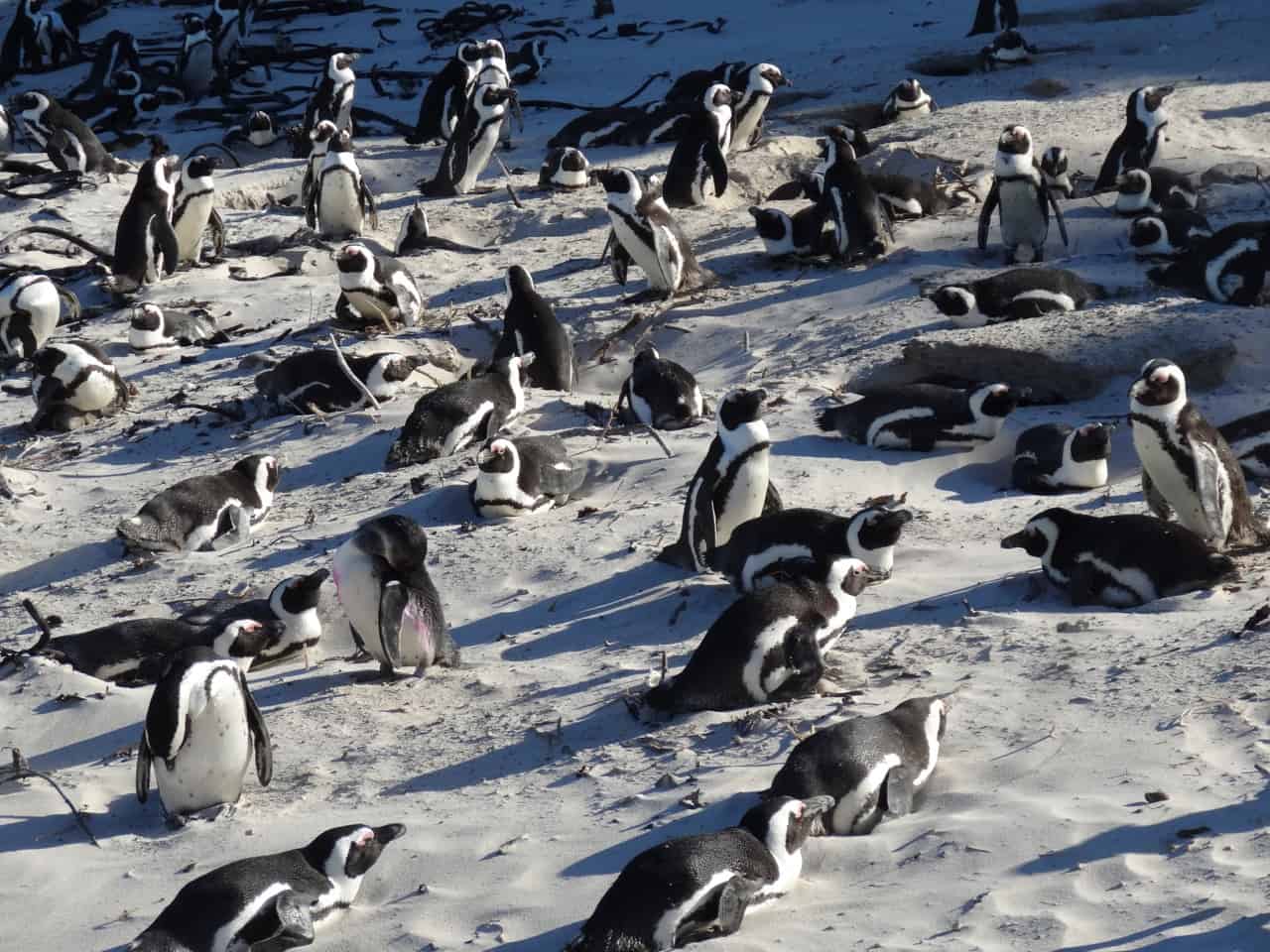 A major highlight of the Cape Peninsula is another animal, the African penguin. Just the sight of these little creatures wobbling about on the beach is surely enough to make anyone happy.

I travelled with Ingrid from Norway, Mauricio from Brazil and Pip from Tassie. Between us, we represented three continents, meeting on a fourth. Such a small world. Pip was a bit blasé about the penguins – they’re everywhere in Tasmania, so no need to see these. The rest of us happily paid the 45 Rands entrance fee to enter the protected beach area. 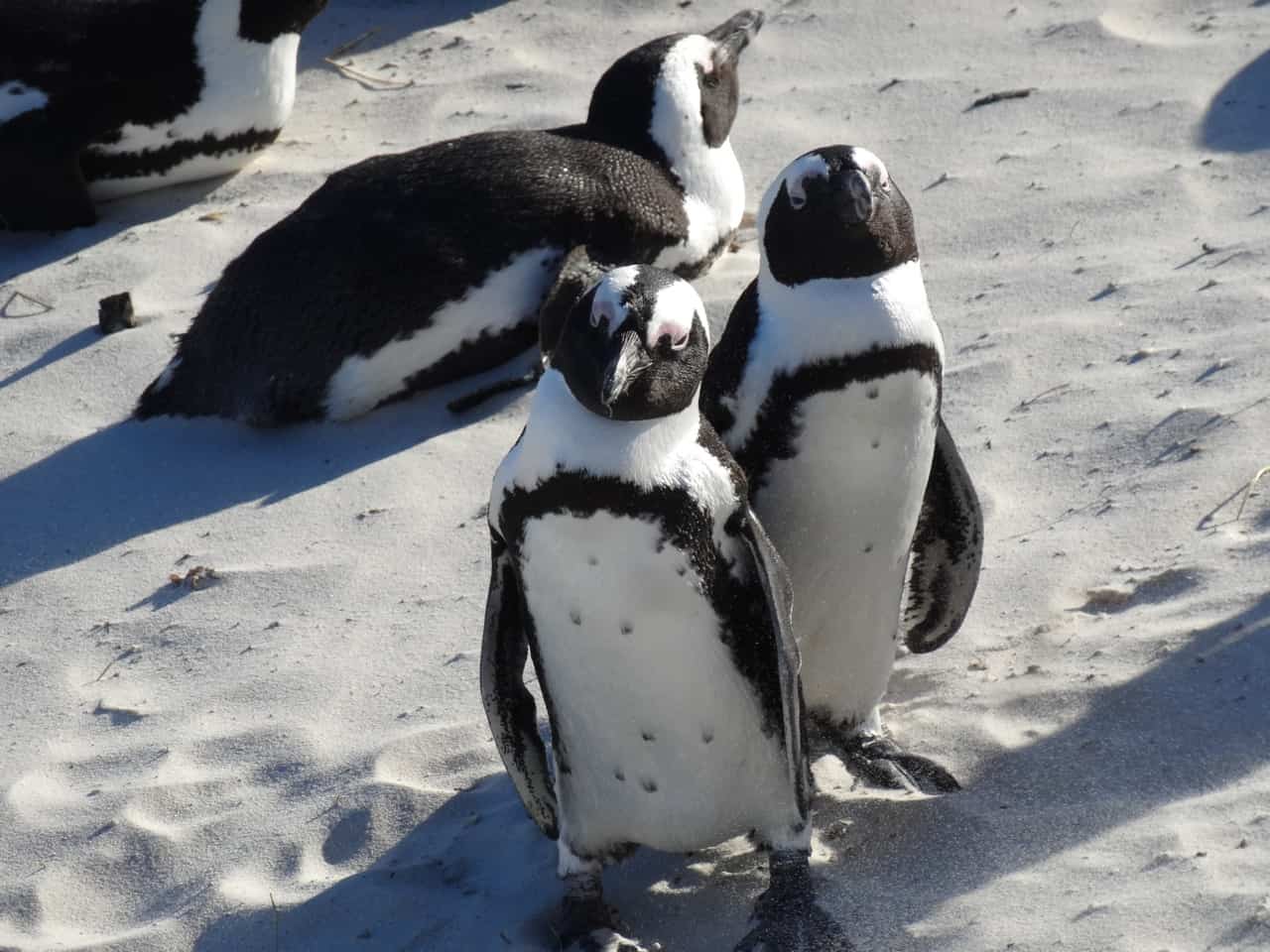 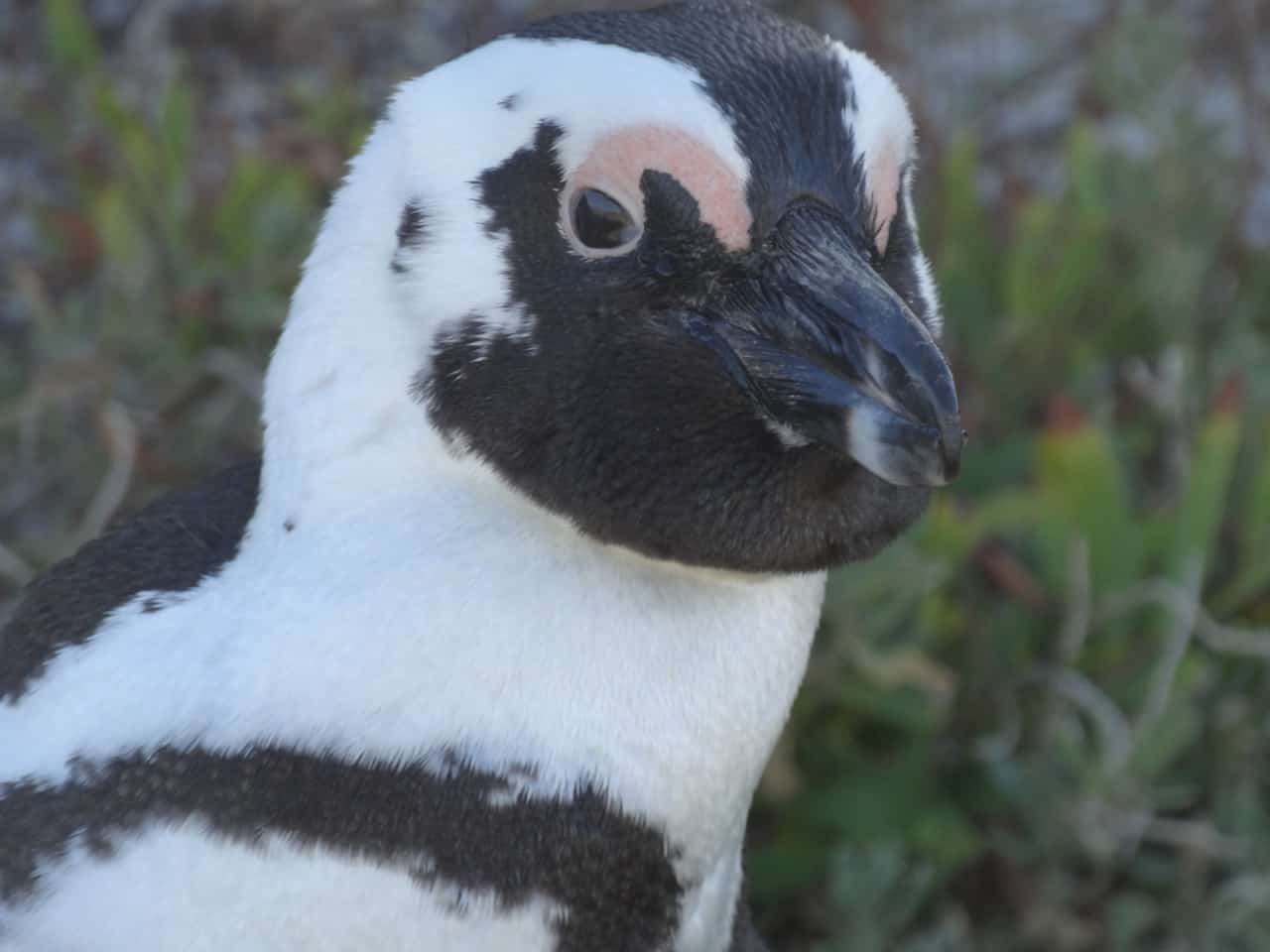 The African penguin was recently classified as endangered, as the population is decreasing due to the destruction of their habitat: oil spills, overfishing, irresponsible tourists, pets and other animals are all contributing factors. As I walk from the beach to the car park, this is aptly illustrated: most homes in South Africa seem to have tall gates, electric fences and barred windows. Watch dogs are equally common. Boulders Beach is no different. On one side of the street, ferocious dogs bark at anyone walking by; across the street, two penguins come out of the water pipes. It’s all too easy to picture these two little creatures as victim of the dogs – or a passing car. Best to see them before it’s too late. 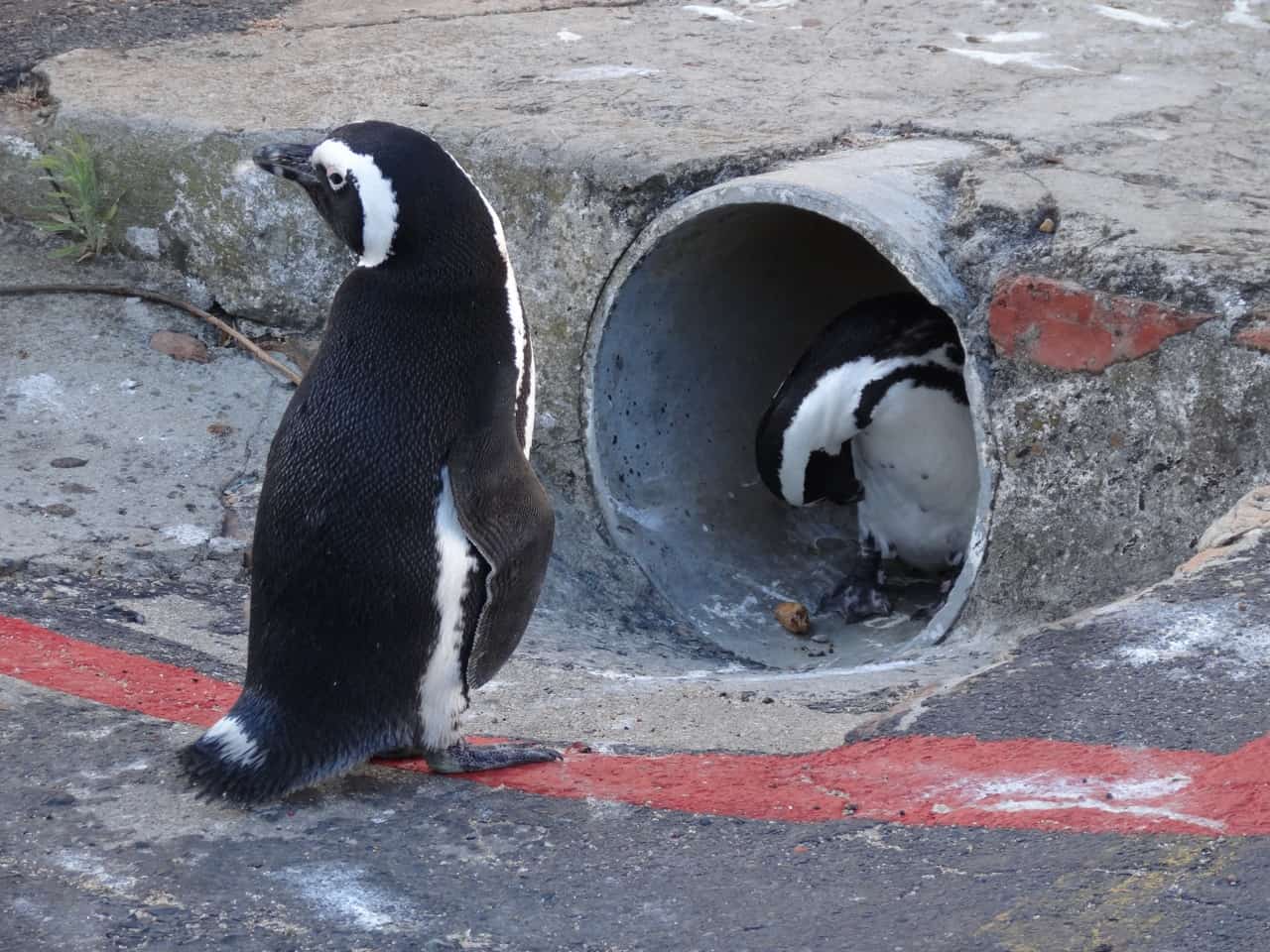