Dublin and Belfast: two capitals, two countries. Although that might not be the case in the future, if some of the predictions in the aftermath of last week’s dramatic Brexit will come to pass.

The EU will feature a bit further along in this story, in a way you might not quite expect. For now, Brexit or not, it’s an easy drive between the two cities – about 2 hours if you go straight along the A1. But if you’re not in a hurry, let me suggest an interesting stop along the way. Or three, actually. The prehistoric burial chamber at Brú na Bóinne (Newgrange) is one. Another is Celtic Monasterboice, with its 5th century monastic ruins and high crosses. 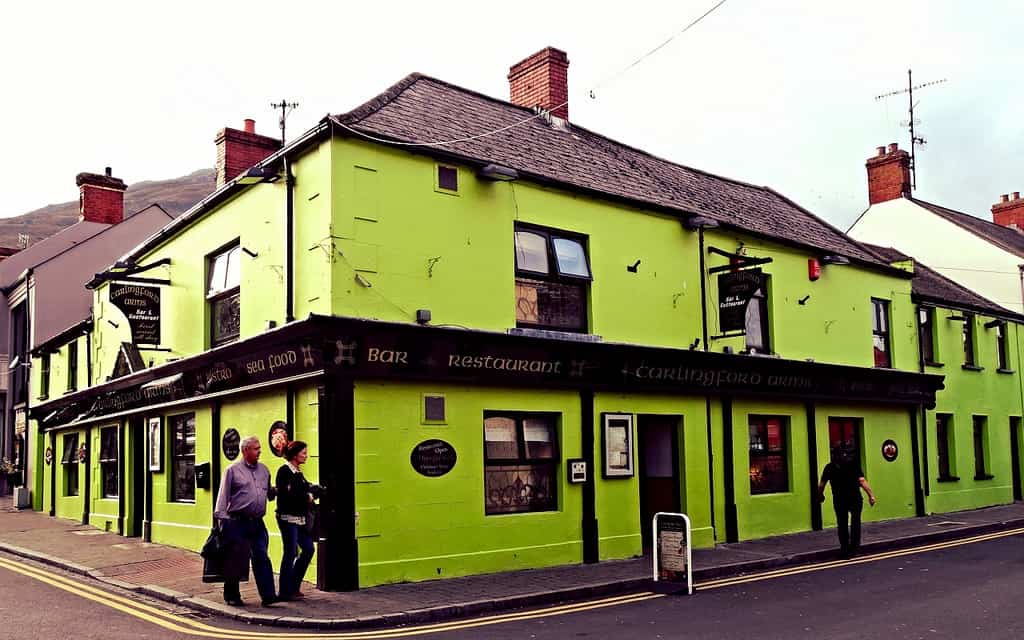 However, this is about another little detour. And leprechauns.

90 km north of Dublin, about 2/3 of the way and 10 km from the border (still), snuggling between Slieve Foy Mountain and Carlingford Lough on the Cooley Peninsula, is medieval Carlingford. You may not have heard about this town. If so, you are not alone. I had no idea it existed before I set foot in it (love little surprises like that).

Although, I probably ought to have known. As I’m reminded during a walk through town, my ancestors stopped by some 1200 years ago, and decided to occupy Carlingford lough. And no doubt, wreak a bit of havoc. Only polite that I should at least know the name. 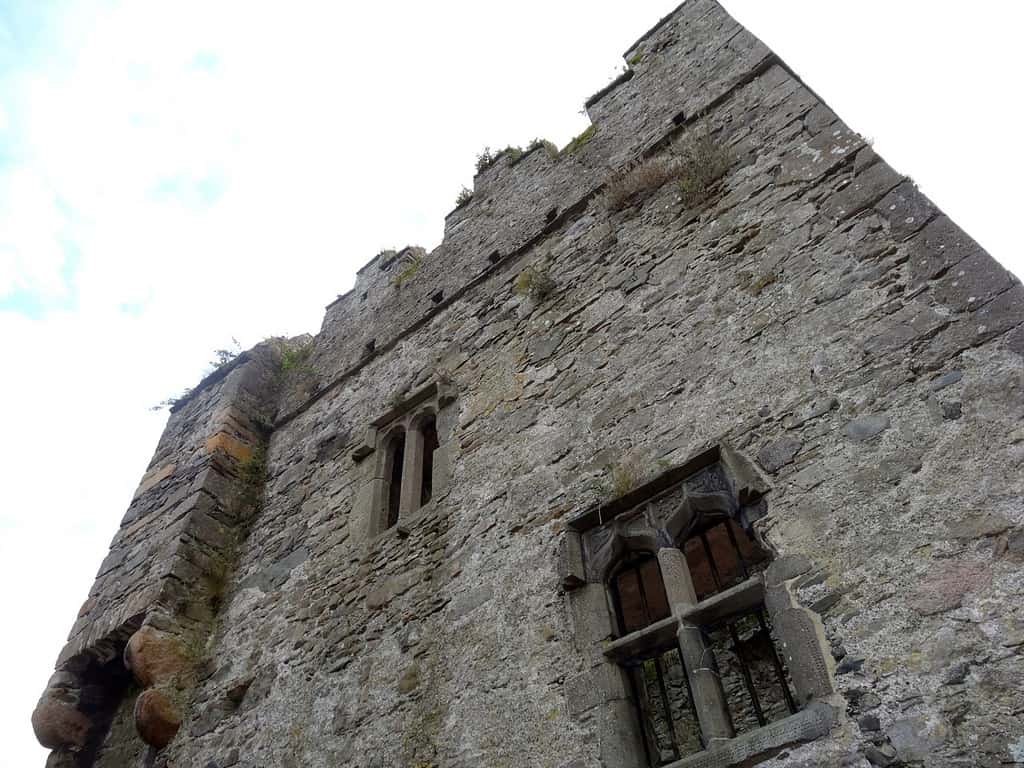 They gave the town its name, Kerlingfjorðr in Old Norse. Kjerringfjord would be the modern Norse version; it means ‘the hag’s fjord’, or, to be blunt ‘the bitch’s fjord’. Not known for mincing words, the Vikings.

Along the town’s narrow medieval streets are three ancient fortifications of various sizes – King John’s Castle, Taaffes Castle and the Mint. Then there’s the Tholsel, one of Ireland’s last remaining town gates; this is where you paid taxes on goods you brought into town. 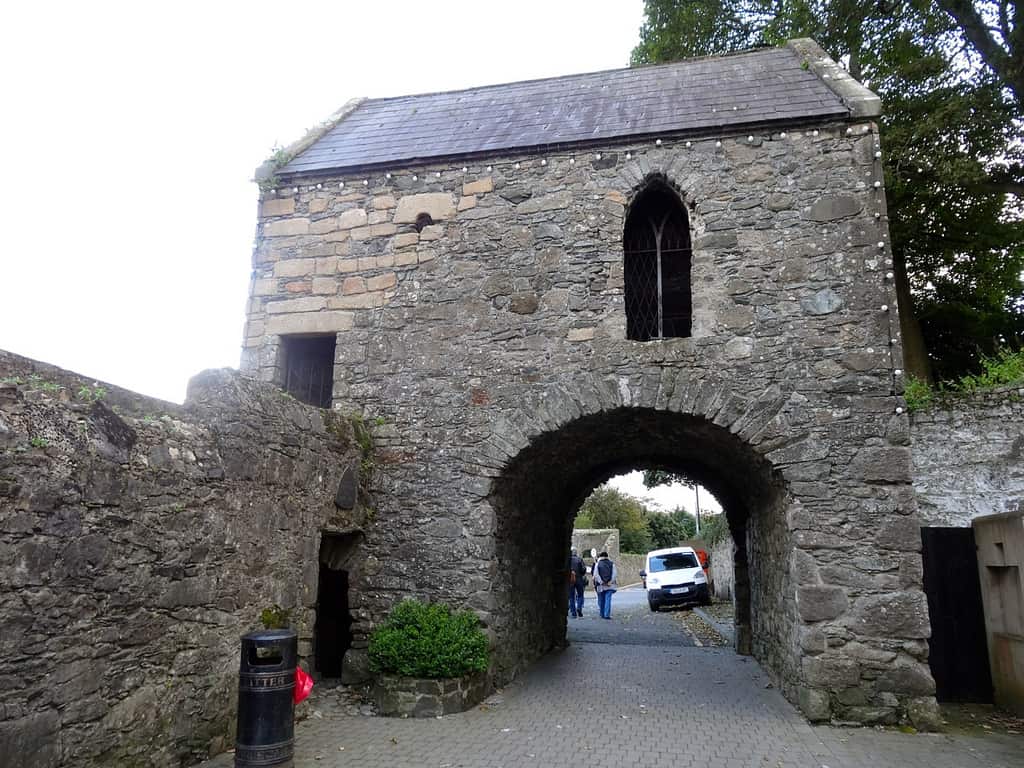 Carlingford has old and new architecture side by side, much of it painted in bright, cheerful colours. Perhaps as an antidote to the more foreboding medieval structures? 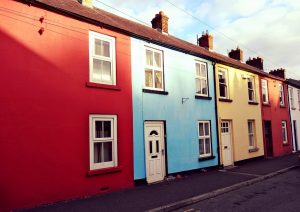 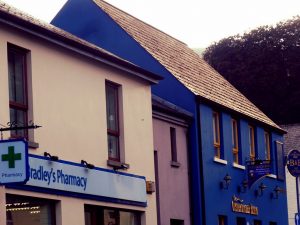 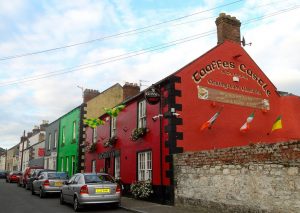 I recommend having lunch at Ghan House, a lovely Georgian country house/hotel from 1727 – and 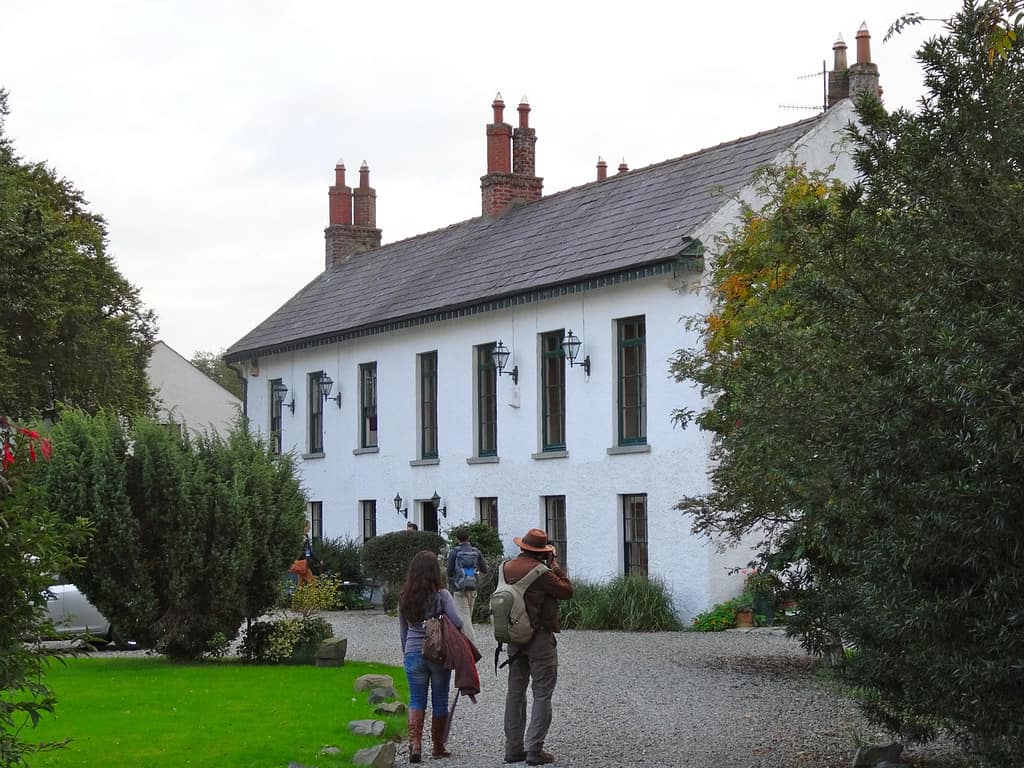 – a beer at P. J. O’Hare’s pub. Which conveniently brings us to the little people. You were waiting for the leprechauns, weren’t you?

This part of Ireland, you see, is steeped in myths and legends, and not all of them ancient. Oh sure, Fionn mac Cumhaill was here – the giant of Giant’s Causeway, standing astride the mountains here while fighting the Giant of the North.

But that was some years ago. In more recent times, in 1989 to be precise, while out and about on Foy Mountain, P.J. O’Hare himself stumbled upon some bones, and a leprechaun hat, coat and trousers, with 4 gold coins in the pocket.

Back in town, P.J. told his friend Kevin Woods (known locally as McCoillte) about his curious find. McCoillte was sceptical, naturally, and organised a leprechaun hunt on the mountain. None was found. A few years later, P.J. went to his reward, as they say in these parts. The leprechaun suit and bones are exhibited in his pub. But whatever happened to the gold coins? 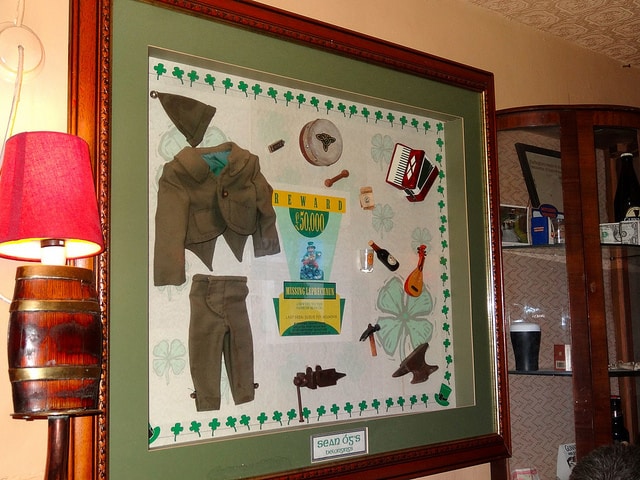 The story doesn’t end there, oh no. A few years later, McCoillte wanders up on the mountain, to the place where his friend P.J. had found the suit, and lo and behold, there he sees not one, but three leprechauns! He goes home and tells his friends about it, but no one believes him (karma, eh?)

He isn’t one to give up, however. The next day he is back up the mountain and meets one of the little people again. This time they have a conversation. The little one, Carraig is his name, tells him he’s one of the last leprechauns in Ireland. Only 236 remain out of millions. And they’re dying because we no longer believe in them. Carraig tells all – and McCoillte publishes his story in The Last Leprechauns of Ireland. He believes in the little people, he says – and is known as the Leprechaun Whisperer. Well, why not? I can think of worse retirement projects.

The Little People protected by the European Union?

The Carlingford leprechaun lobby (and the Independent) claims the European Union has declared a part of the Cooley Peninsula a ‘Designated Area of Protection for Flora, Fauna, Wild Animals and Little People’ through its Habitats Directive. A classic brown sign have been put up, complete with the well-known EU stars on the blue background. Even QI refers to leprechauns being protected.

Intriguing, isn’t it? Do the institutions of the European Union have an open mind? Or at least a sense of humour.

It almost pains me to write this: fact is though, I’ve looked through the entire directive (Council Directive 92/43, if you’re interested), as well as the Natura 2000 ecological network of protected areas. Nothing, folks. Nothing. So I’m afraid I’m landing on the side of craic.  I’d be delighted to be proven wrong. 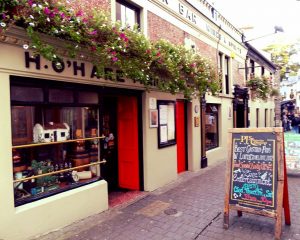 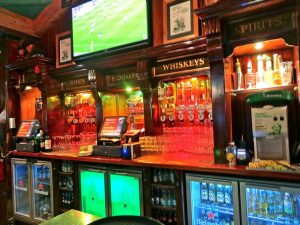 But don’t let mere facts stop you from paying a visit to the Leprechaun and Fairy Underground Cavern when you’re in Carlingford. And if you’re here in April, put on your own leprechaun suit and join the annual National Leprechaun Hunt. (No worries, you’ll only hunt for ceramic little people.) I’d love to return myself. Maybe spend the night on Slieve Foy mountain. Who knows who might greet me in the wee hours with a cheerful Top o’ the morning to you, Sophie.

Have you visited Carlingford? What say you re the little people?

Disclosure: I’ve been in Dublin and Belfast and on the road in between many times, sometimes as part of a hosted press trip and sometimes on my own dime. In Carlingford, I was a guest of the Irish National Tourism Development Authority, Fáilte Ireland. Naturally, I have complete freedom to write whatever I want – or nothing at all. As ever.