Cenotes: the bewitching underground world of the Mayas

We’re not quite ready to leave Mexico yet here on Sophie’s World. Today, we’ll go for a swim, in a spring deep below ground, sunlight shining from high above. And we’ll dive through enchanted caves in the jungle. (Well, you are. I’ll stay in the shallows, because water and I, we have somewhat of a tense relationship.)

And where will all this magic take place, you ask? In cenotes, that’s where. Nature’s very own mesmerising sinkholes; surfaces of subterranean springs, resulting from bedrock collapsing; prolific here in the Yucatan.

We’ll visit two types of cenotes: one is inside a cave (inside many caves, actually) – and one is in the open air with the roof completely caved in, limestone walls several metres deep. Two very different experiences.

The subterranean cenotes usually have transparent freshwater, where you can see far below. The open-air ones tend to have an accumulation of blue-green algae since the water is exposed to sunlight.

A window to the elusive Mayan world 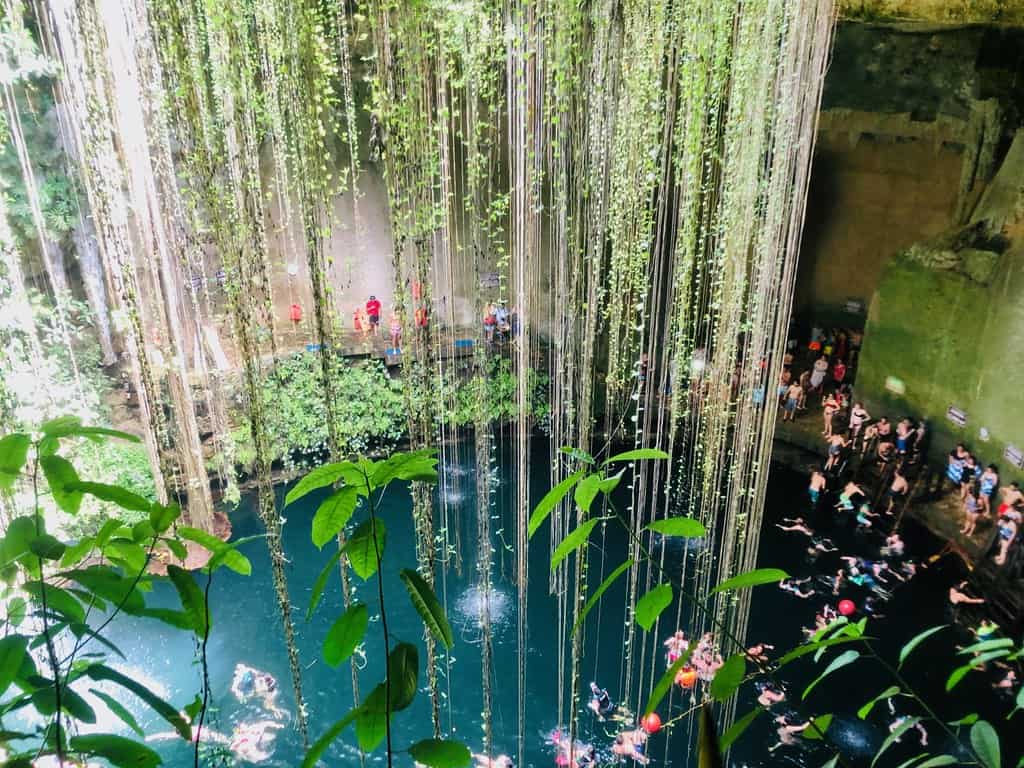 For the Mayas, the cenotes provided fresh water. They were also fraught with religious symbolism; some had holy properties, often connected with the underworld, linked to the moon, and to Ix Chel, grandmother goddess of medicine and childbirth.

Human sacrifice seems to have been important in Mayan culture – as gifts for the gods. One of the most frequently used methods was tearing the heart out of, or disembowelling, a still living victim. Another often employed method was beheading; seems practically humane in comparison, doesn’t it? Tossing the sacrificial ‘lamb’ into a cenote was quite common, too. The thought of drowning is undiluted horror to me, so I hope they were killed before being hurled in.

Archaeologists have found numerous remains in various cenotes, of men, women, children and infants. According to researchers at the University of Yucatán, the children were probably bought or caught. Other victims may have been POWs, captured enemy soldiers – a pretty high-status sacrifice to offer to the gods.

With those disturbing thoughts running through your head, let me hasten to add that cenotes are intriguingly beautiful and mystical, so you’re well advised to add at least one to your itinerary when you visit Mayan Mexico. Rumour has it, there are about 6000 of them here on the Yucatán Peninsula, so they’re not hard to find. In fact, if you like hanging out in bars, you may even stumble over one. More on that oddball experience, and two of Mexico’s most famous cenotes below.

First, let’s get up close – or rather, down close, i.e. from water level – with the two eyes. 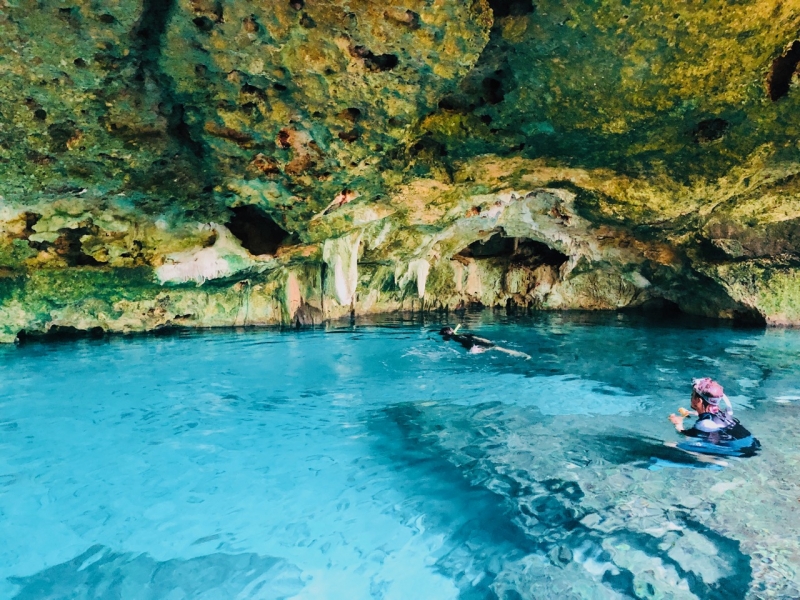 In Dos Ojos, you can scuba dive or snorkel through enormous caves with stalactites and stalagmites. And bats! The water in this spectacular sinkhole is crystal clear, deep and beautifully blue. We’re in between Playa del Carmen and Tulum, and we’ve got two cenotes here, two ojos, connected by a 400-metre passage.

With an 82 km long cave complex and 28 cenotes, Sistema Dos Ojos attracts divers from near and far, enjoying the exciting drops in perfect 25°C year-round temps. Signs point you to 1er OJO and 2o OJO. I’d advise you to see the eyes in that order. No 1 is clear blue, while no 2 is a vast, dark cavern and by far the most interesting one. 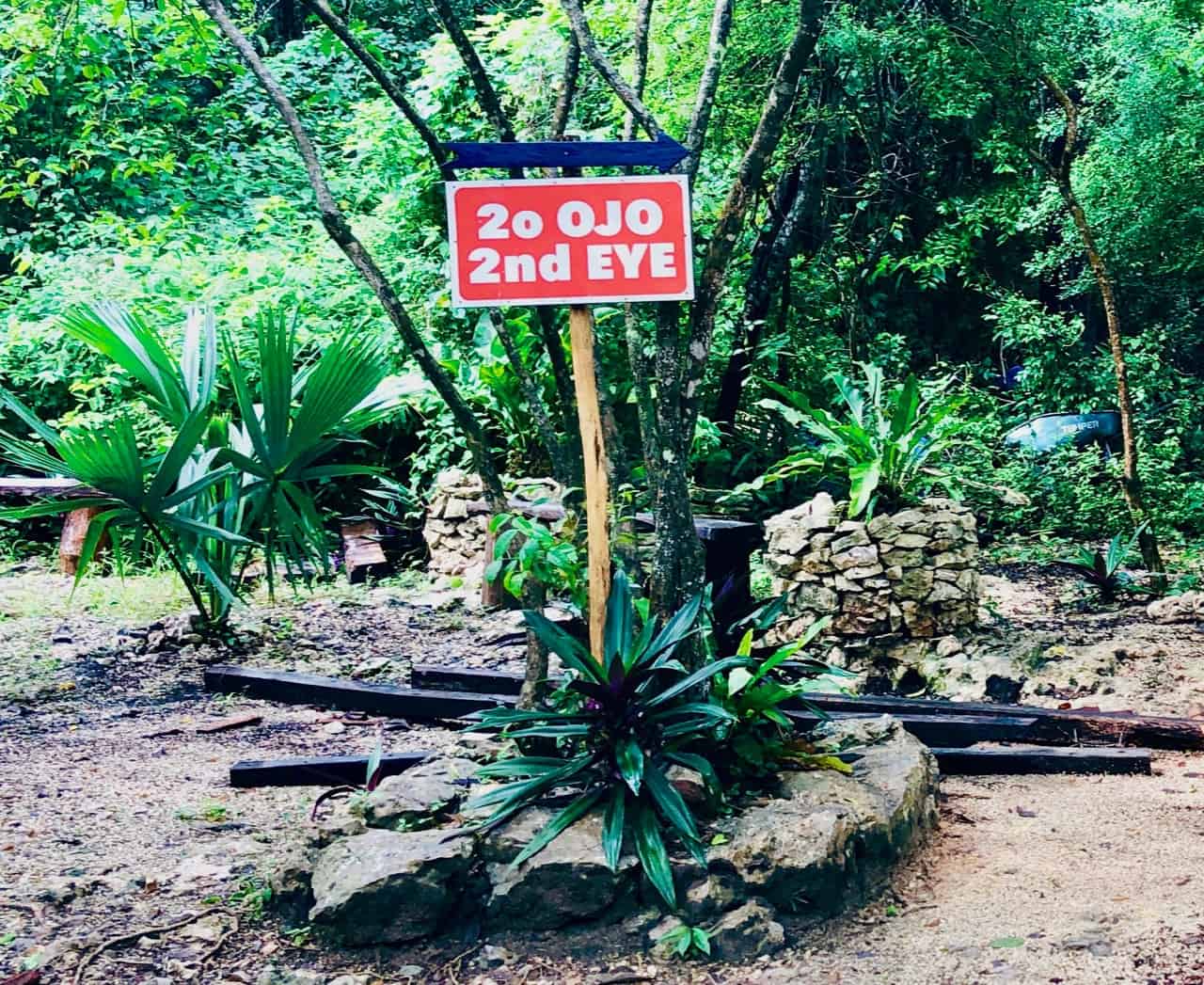 – and saw about 100 divers above water level, getting ready, and quite a few below water as well. Visibility is first-rate, and I was childishly thrilled to see torch beams cutting through the water. Felt like a sci-fi movie taking place right next to my feet. Ooohhh! 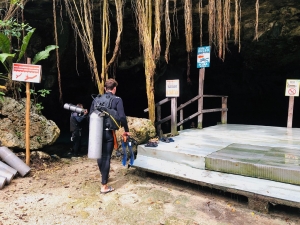 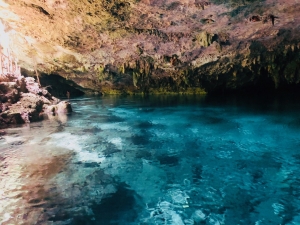 If you’re a bit braver in water than I am (and believe me, it doesn’t take much), you can go through the underwater passage connecting the two eyes. Even braver? The deepest underwater passage here is 118 metres down. There’s also dry caves here. And mozzies. 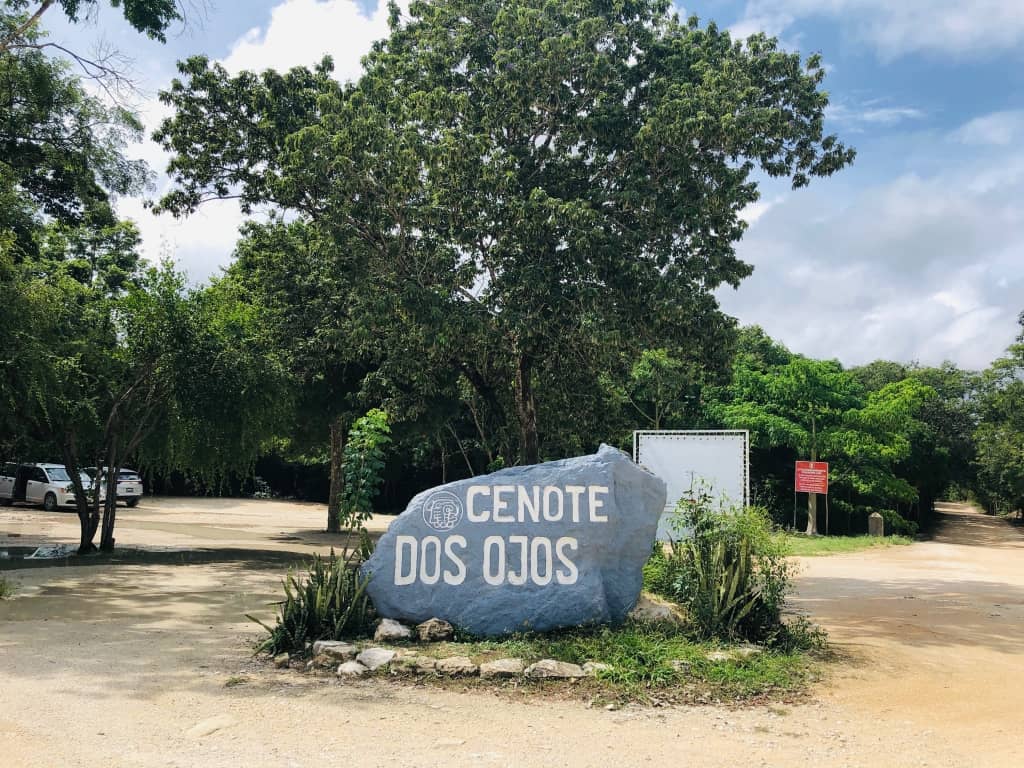 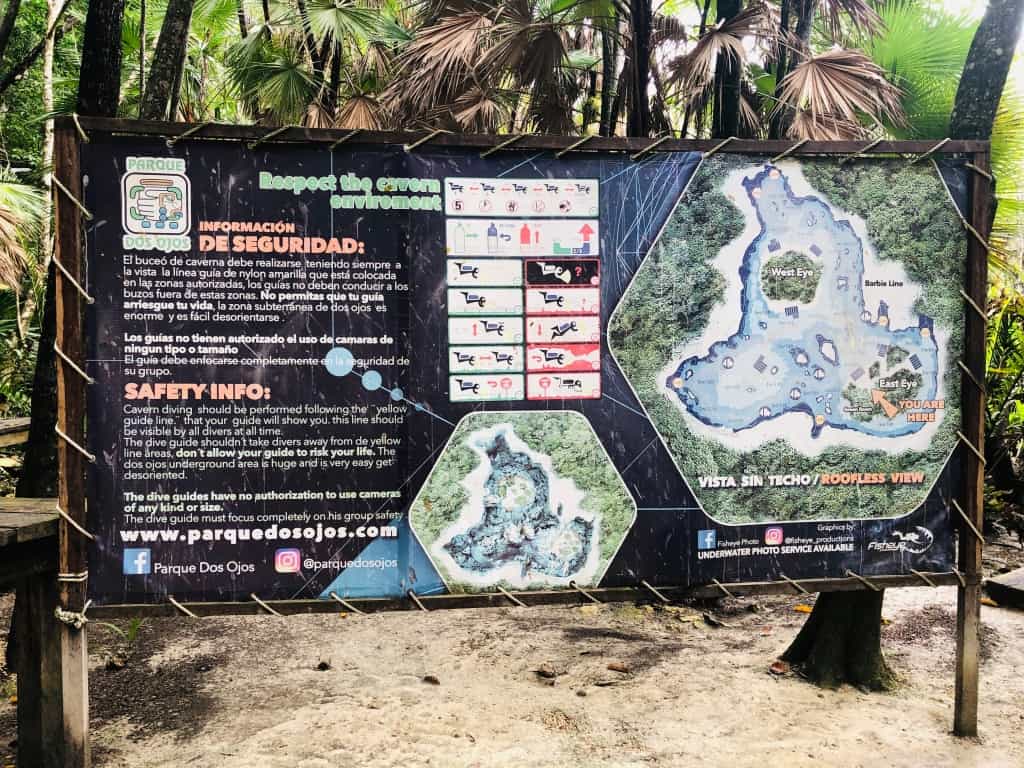 Dos Ojos is about 3 km from Highway 307 (about 20 km from Tulum, a third of the way towards Playa del Carmen). It is possible to walk along the jungle road here, but you probably don’t want to, as you might run into a jaguar – or a panther, or other jungle creatures. Chances are, they’re more afraid of us than we are of them. But still…

You can get there by taxi, colectivo (shared taxi), with a private driver or on your own. Traffic in this part of Mexico seems straightforward and easy; I wouldn’t hesitate to drive – in fact, I’m considering a road trip next time in Yucatán.

Dos Ojos’ opening hours are 0800 – 1700; get there at 0800 if you want the place to yourself for an hour or so. Entrance fees seem to vary, depending on how many other cenotes in the area you want to visit. I paid 350 pesos (ca 18 USD/16 EUR). Plenty of organised tours are available as well – from Tulum, Playa del Carmen, Cancun and Riviera Maya.

There’s a restaurant near the entrance. Nearer to the cenotes, there’s a small shop, basic toilets and changing facilities. Lockers, life jackets and snorkelling gear can be rented. Life guards walk around; my general impression is that safety is taken seriously.

Advice numero 1: Bring bug spray! A couple of hours crawling through the dry caves left me with mozzie bites (or something similar, I never found out) on my forehead and right underneath my eyes, plus 51 of them on one leg (yes, I counted.) 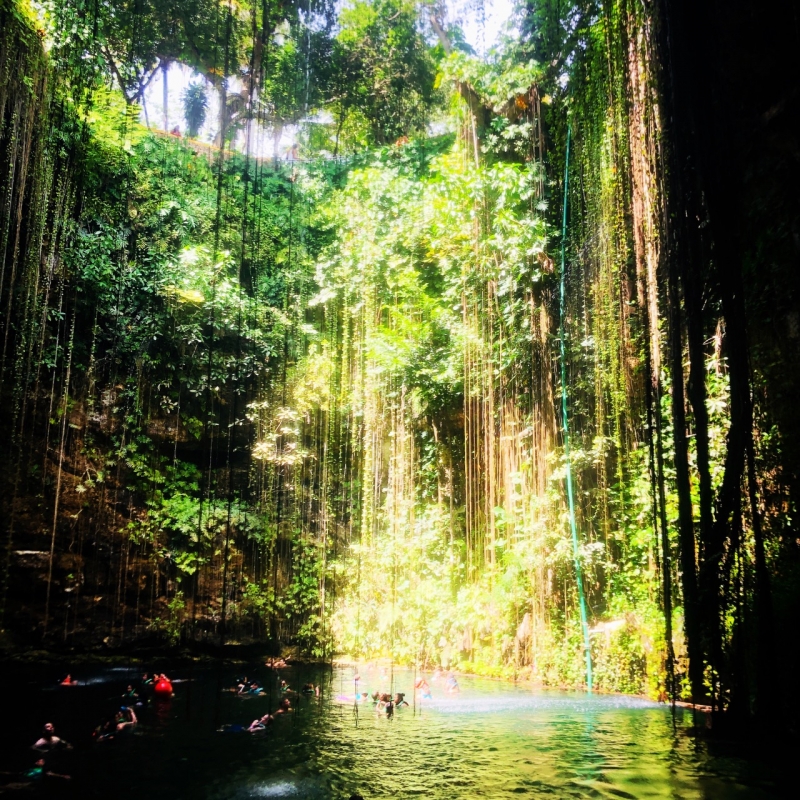 Cenote Ik-Kil. I love the dramatic effect created by plants projecting from the top all the way to the water. Feels like sanctuary. And so, so beautiful.

Ik-Kil is near Chichen Itza. If you take a tour to that ancient Mayan city, a stop at Cenote Ik-Kil mght be included. I wouldn’t advise doing it that way though, since you will likely have a very limited time to swim and explore the place, and this place requires time. It’s that cool!

The waters here at Ik-Kil were sacred, so this was one of the sacrificial spots. On a more pragmatic note, it’s many slippery steps down to the water. The cenote is 40 metres deep and with a 60-metre diametre, you’ll have enough space to play around, at least now in low season.

We’re 26 metres below ground here, with the roof wide open, and sunshine flooding in through the hanging vines. Gorgeous spot! Just go!

And hop in! Never mind that human bones have been found at the bottom.

Note: don’t hop in from above ground! If you do, a warning sign says you ‘will be taken to the authorities’, so don’t even think about it. But hop in from the jumping platforms, 3 and 6 metres high, respectively. Or climb down one of the two ladders. 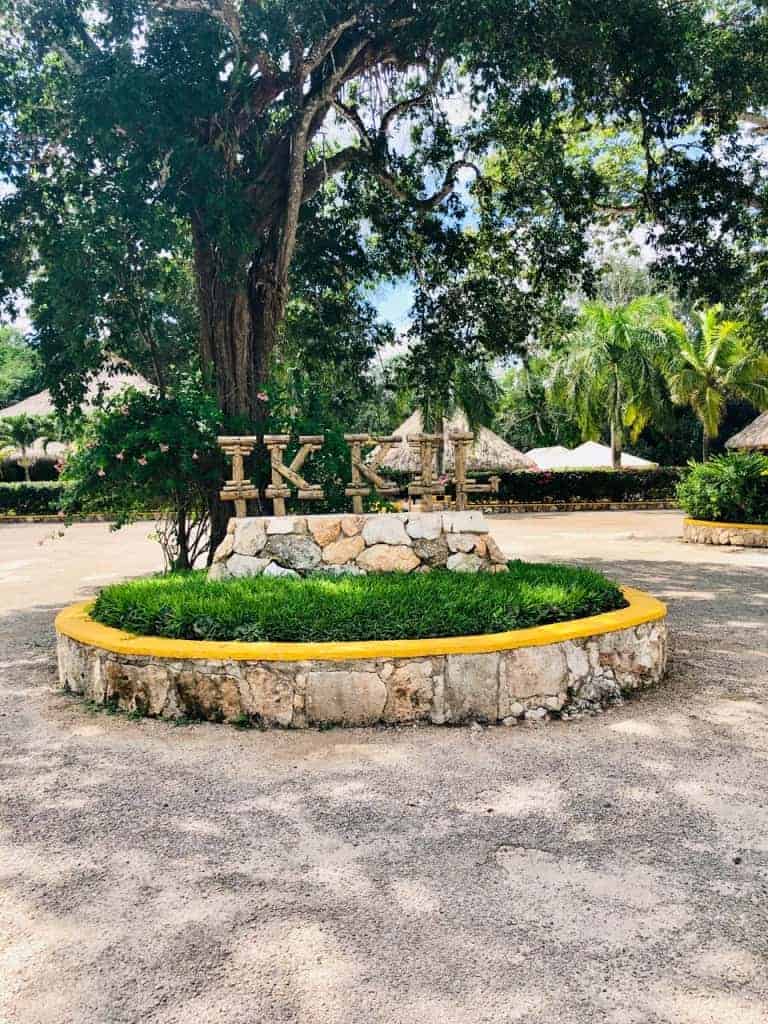 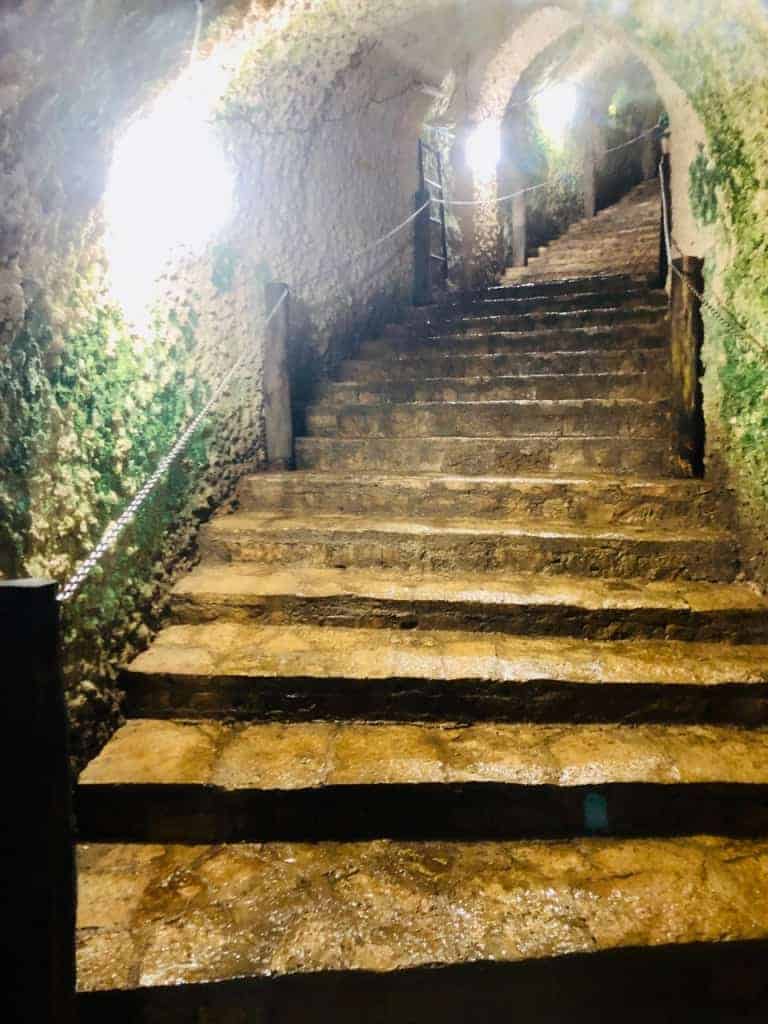 Ik-Kil is near Highway 180, about 2 km from Chichen Itza, and in the other direction, 40 km from Valladolid. Again, transport options abound: your own car, busses, taxis, colectivos.

This cenote has very good facilities, with clean and airy changing rooms and toilets. There’s two restaurants and a few shops/snack bars. There’s even a bungalow hotel on site, if you want an evening of peace and quiet and wild jungle creatures nearby.

Lockers, life jackets and even towels can be rented for 30 pesos each (USD 1.5/1.3 EUR). There’s no shallow area, but ropes to hang on to if you need a break. Or just in general. Also, life guards are on duty – for your safety, and to make sure no one touches the oh-so-tempting hanging vines. 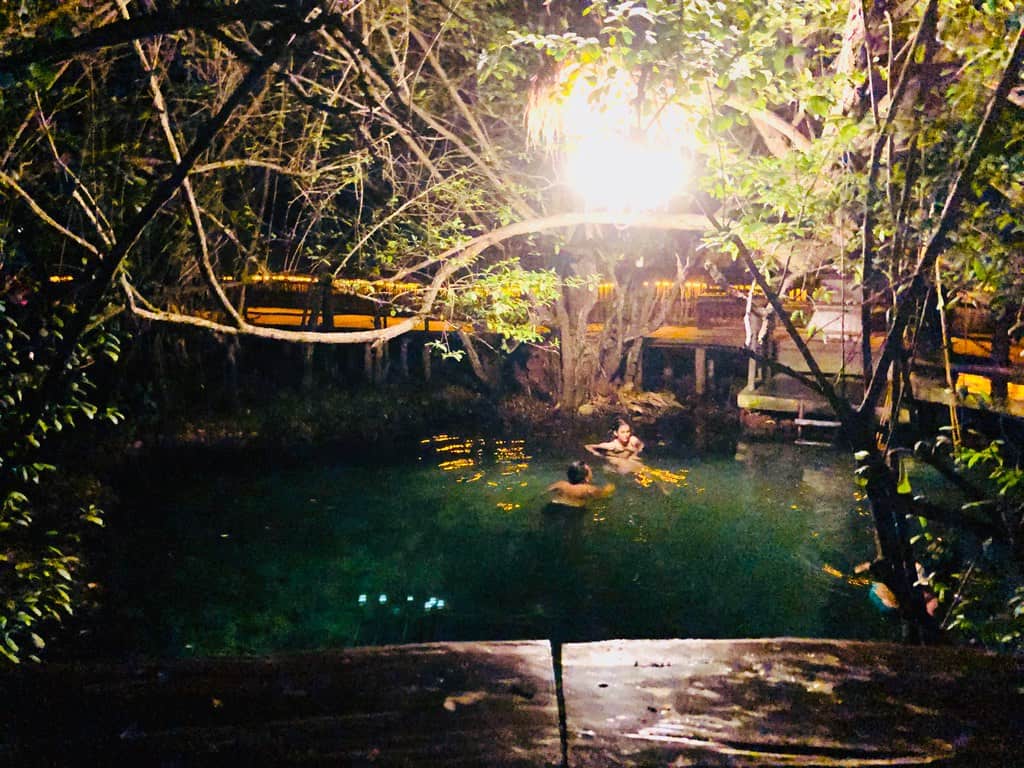 Smack in the middle of Clan-destino, a dive bar in Tulum, you’ll find a Mayan sinkhole, with seats surrounding it for a jungly feel. Cenote de las Vírgenes, they call it – Cenote of Virgins.

where you can jump in and recover your virginity, and once there, you’ll realise nothing has happened, except the aforementioned part is refreshed.

And if that isn’t naff enough for you, there’s a swing above the cenote, and a kitsch chandelier. Even naffer, there’s karaoke. Can’t sing? The house Mezcal takes care of any inhibitions.

The menu consists mainly of burgers. We didn’t try the food, but the drinks were OK. However, the cenote is the main draw. So you can come for the swimming, swinging, eating and drinking.

PS Didn’t think to bring bugspray to a bar? No worries, the waiters will bring you some. 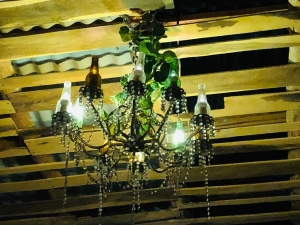 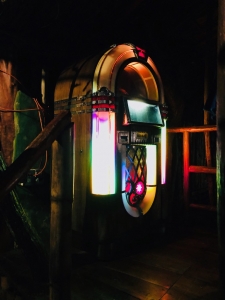 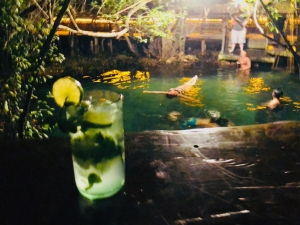