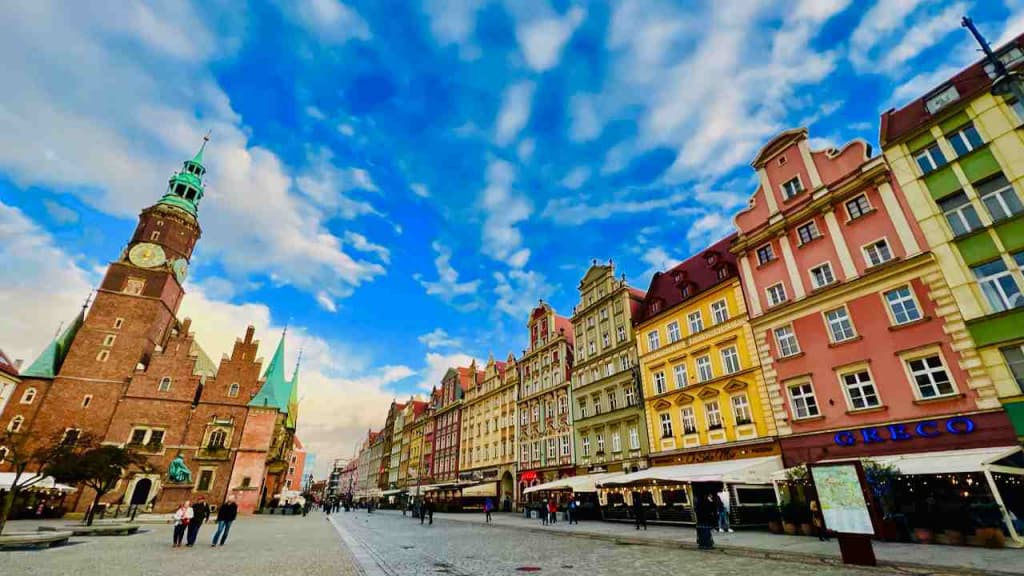 On a random Monday in October, I find myself in Wrocław. I am here to make a delivery: disembark, take two huge bags through customs, hand them over, then fly right back. That was the plan anyway. But my options were essentially either A. a roundabout route via Stansted, having to spend the night at what is not exactly the world’s most interesting airport, or B. stay overnight in Wrocław and catch a 6am return flight, back in time for work. No-brainer.

Let’s have a look at Wrocław then

That’s about 7 (waking) hours in Wrocław. A working day, basically. Hopping off the airport bus, I walk towards the old town, crossing the river, past grandiose buildings in all kinds of styles. 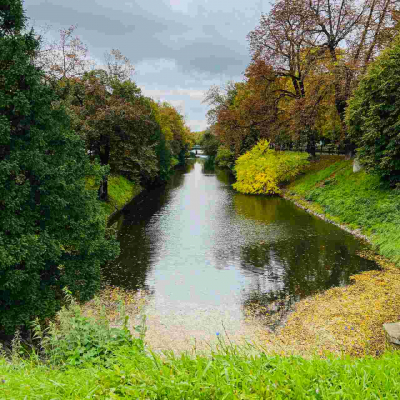 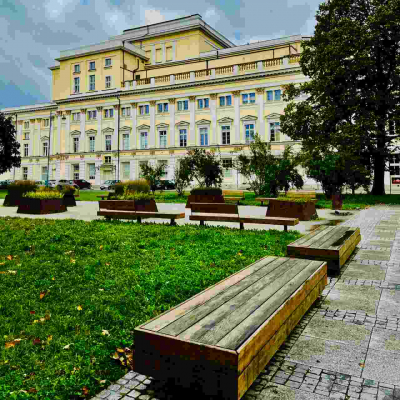 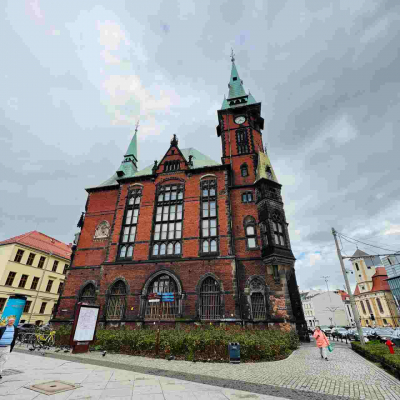 Then, before I know it, there is Rynek we Wrocławiu, the medieval market square, one of the largest in Europe. I instantly like this vast, colourful space. 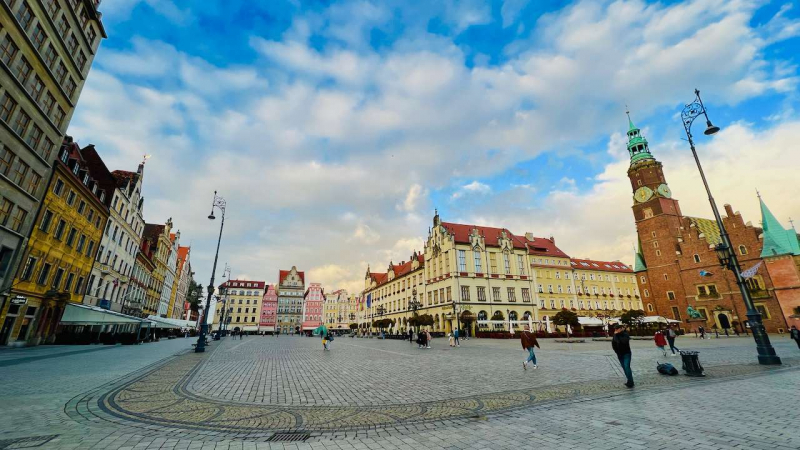 Bonus points to Wrocław for keeping the square car-free!

The gnomes of Wrocław

A quirky feature on the market square (and elsewhere in town) are the krasnale. Gnomes! More than 600 of them so far. These three little people are next to City Hall. 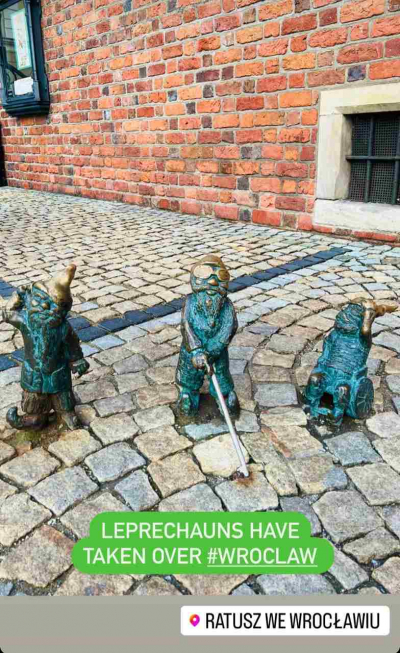 The krasnale are about knee-high; watch out so you don’t stumble over them.

The gnomes are in honour of Pomarańczowa Alternatywa (the Orange Alternative), a far-left underground group formed in the 1980s in opposition to Poland’s then Stalinist rule; a faction of the Solidarity movement, and a clever one at that. The idea was to protest peacefully using nonsensical methods that made fun of the authorities: gnome graffiti on the city walls, dressing up as gnomes, etc.

Can you treat a police officer seriously, when he is asking you: “Why did you participate in an illegal meeting of gnomes?”

The group inspired similar movements in other countries, including the Orange Revolution in Ukraine.

As you know, I enjoy exploring world heritage sites – and as luck has it, Wrocław is home to Centennial Hall. A quick search tells me Hala Stulecia (its current Polish name), is closed on Mondays, so I will only be able to see it from the outside. Better than nothing!

The site is a ways from the city centre, so I hop on tram no 2 from the railway station, and get off at Wrocław Zoo. Centennial Hall is across the road. 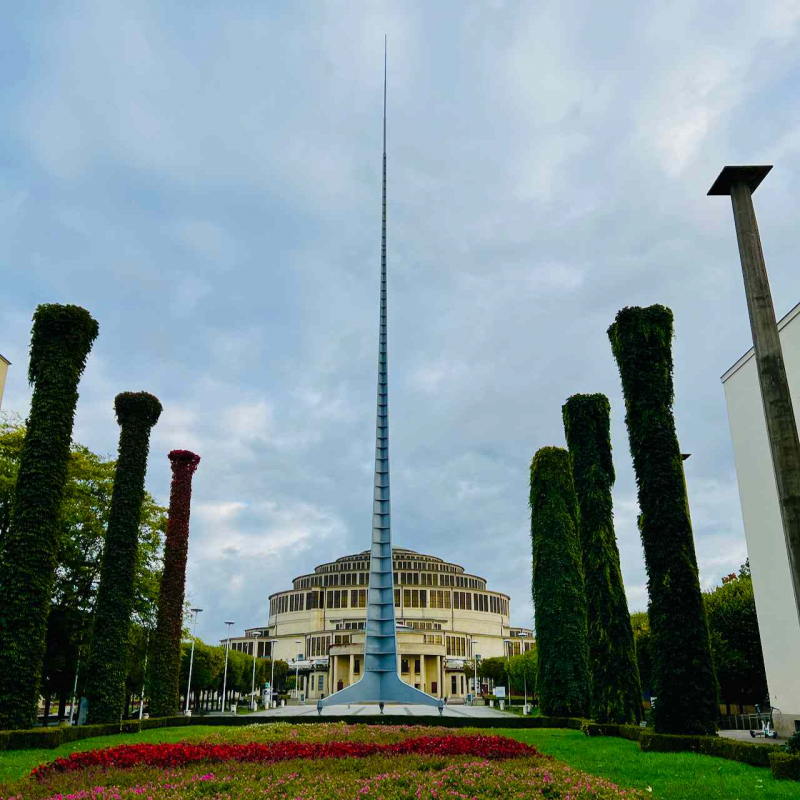 Centennial Hall: a concrete and steel arena with a gigantic domed roof

Some would claim it is not exactly a work of great beauty. Me, I like this Modernist construction. What do you think?

I also like the Iglica just in front of it. This tall piercing needle was put up in 1948, in the Communist era, symbolising people working together to reconstruct a city ravaged by war. 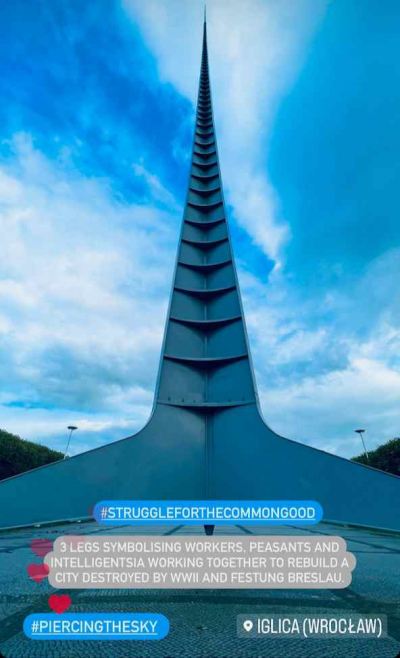 Heritage with a story

Like the Berlin Modernism Housing Estates, Centennial Hall is a place with a story:

The city of Wrocław is ca 1,000 years old. During that millennium, it has been on Polish, Bohemian, Austro-Hungarian, Prussian and German hands, before reverting back to Poland after World War II.

Centennial Hall was built in the early parts of the 20th century, when the then German city was known as Breslau. Consequently, the hall began its existence as Die Jahrhunderthalle (literally, the Hundred Year Hall).

Why Jahrhundert? Centennial? Wrocław was the centre of the German Liberation movement against Napoleon. In 1813, Germany beat that little whipper-snapper at the Battle of Leipzig in the Befreiungskriege (Liberation War). 100 years later, architect Max Berg designed a large hall to commemorate the anniversary of that sweet victory. The hall was built to host sport events, theatre productions, fairs, exhibitions and concerts (Marlene Dietrich performed here!) It still serves as a multi-purpose recreational building today, seating 10,000.

At the time it was built, it was the largest reinforced concrete building in the world, with the largest dome in the world, all steel and glass, 23 metres high and 65 metres in diameter. That is 1.5 times the Pantheon. A pioneering work of modern engineering and architecture, UNESCO calls it. Revolutionary.

It was aesthetically revolutionary, as well: simple and functional, no cladding, little in the way of decoration.

Wandering around it today, it does not seem all that revolutionary. So I try to transport myself inside the mind of a construction worker in 1913. Why would I do that? Well, you see, back then, the design was so pioneering, so bold and reckless, that the workers did not want to enter for fear the whole thing would collapse. Or so the story goes. True story or not, 100+ years later, it still stands.

Centennial Hall has survived two world wars. In addition to all the sports events, concerts and the like, it had a more ominous purpose before and during World War 2, as venue of large-scale Nazi rallies.

A rose by any other name

Architect Max Berg, who designed Centennial Hall, called it a Cathedral of Democracy. Nothing modest there. When Wrocław was reverted to Poland in 1945 according to the terms of the Potsdam Agreement, the hall was renamed Hala Ludowa, the People’s Hall – a proper good Communist name, innit? Today, it’s Hala Stulecia yet again. The present owners, the City of Wrocław, calls it ‘a pearl of modernism‘.

– is where I was not. Had it not been a Monday, I would have, of course. You can’t really get a proper feel for the construction just from the outside. You can’t see the technique, the structure. Nor can you see the cross at the top of the cupola; legend has it, it was covered up during Communist times. Most of all though, I would have liked to see the spacious circular arena, pretending Marlene Dietrich is on stage, singing about the boys in the backroom.

The hall is surrounded by a pleasant park by the River Oder and is a popular outing for locals. Also in the complex are exhibition grounds, dancing fountains, a Japanese garden, pergola walkways, a small wooden church, and the Four Domes Pavilion housing the Museum of Contemporary Art.

Opening hours and entrance fees for Centennial Hall are here.

Walking back to the centre

The rain has abated, so I decide to walk the 4 kilometres back to the old town, past colourful houses, 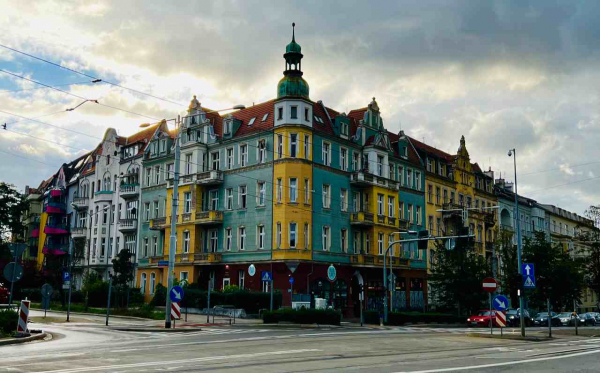 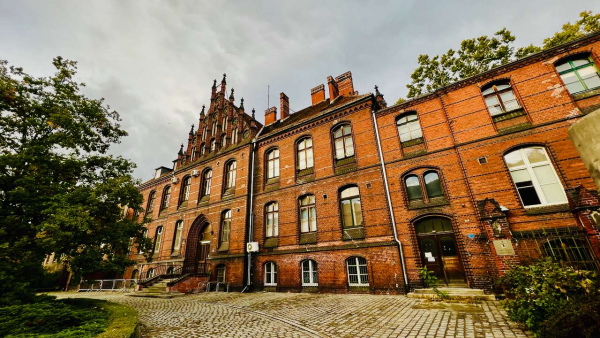 – and Peregrine of Wrocław, knight and weary traveller, having a rest at Plac Grunwaldzki. 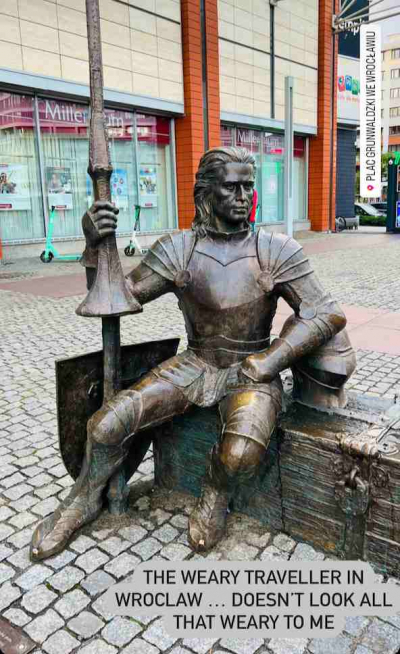 Let the weary traveller sit a while, and any curious soul too. I have returned from England to sit here and talk with you. Many days my journey lasted, much of the world’s fabric I saw. Many people I did meet, yet images of home my mind would draw. True is the saying that art confounds human mortality, But my Grandpa, an old veteran, chose his words differently. He said, “Dear Peregrine, better at home bread and cumin, than elsewhere a plump chicken.” Right he was the kind old man – which is what I avow with my nobility, testimony and knightly pedigree.

Considering MMVII is Roman for 2007, this seems somehow less … historic than one could hope, but I sit down for a chat anyway. He is kinda quiet, so I have to carry the conversation. And now I am the weary traveller.

Back in the old town, the main square looks enticing also at night. 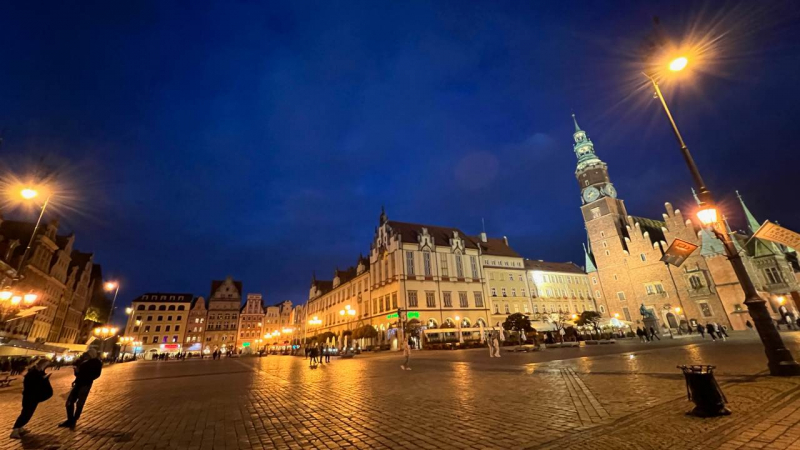 Turned out staying overnight was a productive affair. Here is my brief summary after the equivalent of a working day in town:

(OK, those last two might not be all that relevant for you, but you know, my blog, my… well, everything)