By Alexandra Redisch in New Orleans

Have you ever been chasing ghosts in New Orleans? This delightfully spooky city just beckons us to come ever closer, to hear just one more spine-chilling story.

When we were in town, my mum, my little sister and I joined a haunted history ghost tour and we all enjoyed it heaps. 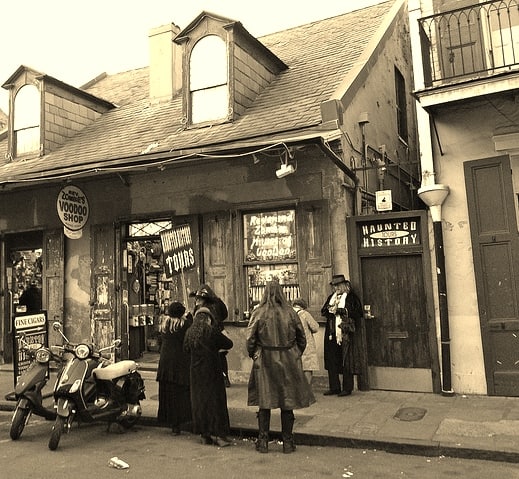 Our little group met on a side street to Royal Street, outside a shop selling voodoo gear. Slightly intimidating-looking staff, no photos and no insulting questions or comments allowed, whatever those might be. Still not sure whether this was for tourists’ benefit, or real…

Here are the haunted histories we heard, and the spooky spots we sauntered past. You can do this walk on your own, but it’s more fun with a knowledgeable, lively and entertaining guide such as ours, Jennifer Vallas.

Now the site of the Andrew Jackson Hotel, this building used to be a school for boys which burned down and now has five active poltergeists in room 210. Mum would like to stay here next time we’re in New Orleans. 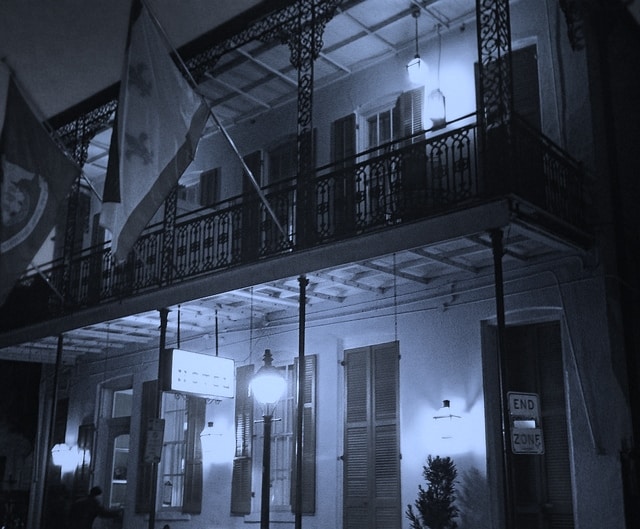 Octoroon was a New Orleans term for someone who was 1/8 black and 7/8 white. Octoroons were free, but since they were part black, they weren’t considered marriage material. However, they were very beautiful, and French men in New Orleans frequently had octoroon mistresses. There would be proper contracts in place to protect the women. They were given a place to live in their name, allowances for them and their families, and children they had with their masters would be considered legitimate and thus eligible for inheritance. Not too shoddy a deal, considering…

19-year-old Julie lived in 734 Royal Street as the mistress of a Frenchman. She was desperately in love with her master, and wanted nothing more than to marry him and have children. Because of their diverging social statuses, the Frenchman knew this could never be, but Julie kept badgering him about it. Finally, he found a way to stop her endless nagging (nice man): If Julie would agree to sit, stark naked, on the roof until he finished his game of cards, he would marry her.

Being sure she would refuse – Julie was very religious –  he goes downstairs to play cards with his friends. The man remains downstairs for hours, completely forgetting the time. Meanwhile, Julie has taken off all her clothes. It’s a bitterly cold night, so she sits next to the chimney, desperately trying to keep warm.

By the time the Frenchman remembers his ‘bet’ with Julie, it’s too late. He runs up to the balcony, and finds Julie’s frozen corpse. Later he discovers she had been pregnant, which was why she had been so intent on them marrying. The Frenchman realised his love for Julie too late, and it is said he died within six months of a broken heart. Julie, naturally, still roams about the house, up and down the stairs. Every year, on the coldest night in December, she appears naked on the balcony. 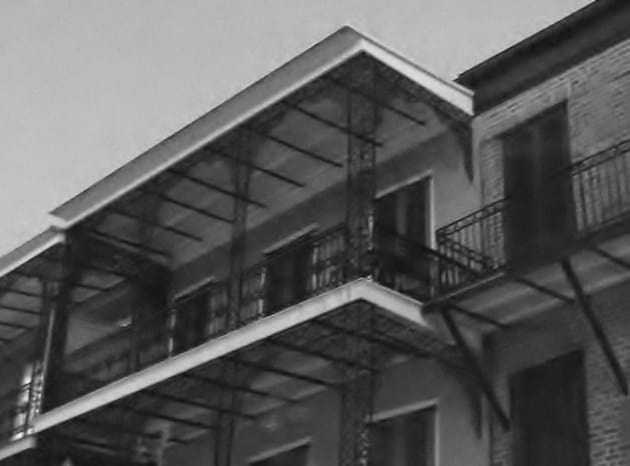 The LaLaurie mansion is allegedly venue of some of the most gruesome events in New Orleans’ history. (After a bit of post trip research, the following account seems to be slightly exaggerated, but it’s so deliciously morbid I’ll tell it anyway.)

Delphine LaLaurie was a New Orleans heiress and socialite with a net worth of $3.8 million in 1829. And a serial killer, as it turned out.

By the time she married Louis LaLaurie, she had already been widowed twice, and after two years, Louis disappeared without a trace. In 1831, Delphine bought 1140 Royal Street and built the three-storey building which stands there today.

Delphine was known for throwing lavish parties. During the party, she always disappeared for a time and returned wearing a new dress. Rumours said it was to show off her wealth; she was never seen in the same party dress twice.

There were other rumours, too. Rumours of torturing slaves. Things came to a head when Lia, a 12-year-old slave girl, died falling from a balcony. She had been combing Delphine’s hair too hard and Delphine was chasing her with a whip. It isn’t clear whether she fell, or was pushed, but either way Lia died. She was quickly buried in the courtyard, but because of the witnesses, there was an inquiry. Delphine was found guilty of cruelty to her slaves, and as a result, nine of her slaves were put up for sale… only to be bought back by Delphine herself.

On 10 April 1835, a fire breaks out in the LaLaurie mansion while there’s a party on. The fire brigade enters the kitchen, where they find a cook literally chained to the stove. She admits to starting the fire as a suicide act to save her from an impending punishment in the ‘secret room’.

The secret room is located behind a hidden door in Delphine’s bedroom, and when the firemen breaks down the door, they find thirteen slaves, all in various stages of dying:
– two people tied to an operating table, undergoing a sex change operation
– a woman with bits of skin flayed off in patterns all over her body
– another with broken bones, set back in unnatural angles
– yet another with eyes and mouth sewn shut

During the parties, Delphine would go up to the secret room to torture slaves. The party noise helped conceal the screams. This was also why she would return wearing a new dress. Can’t have blood all over the frock, now, can one?

As the fire brigade brought the victims down from the secret room, the shocked guests morphed into an angry mob and ransacked the house. Delphine vanished in all the commotion, and was never seen again. The house is a scary place to live, and it has had numerous owners, including Nicholas Cage.

The Inn on Bourbon (601 Bourbon Street)

The Old Opera House, now The Inn on Bourbon, was once the main Creole social and cultural scene in the French Quarter. It was also the first opera house in the USA. Before the opera house was built, a woman known only as Marguerite lived in a more modest house that once occupied the site. She was a mature lady with a penchant for young men. When one of her young beaux left her for another woman, she committed suicide, leaving a note threatening to come back and kill her lover and all who had ever hurt her. It is said her young man died shortly after. Marguerite is often seen leaving the house at 10.52 pm, and walking down Bourbon Street. 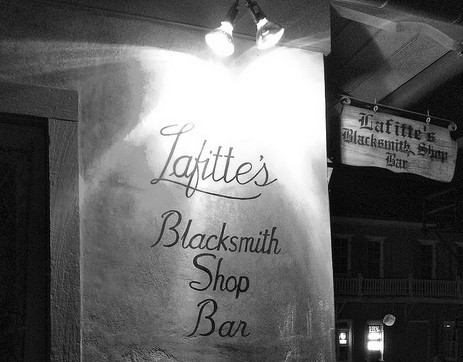 Built sometime between 1724 and 1762, LaFitte’s Blacksmith Shop Bar is one of the oldest buildings in New Orleans. There isn’t much documentation, but famous pirate Jean LaFitte is purported to have lived here at one point.

It has been a tavern for most of its life, which I suppose fits well with the LaFitte connection – pirates do like their rum, don’t they? There are several ghosts here, especially in the courtyard, where at 3.15 am you may hear two ghostly Frenchmen argue. There is also a woman wandering about, who lost her children in a cholera epidemic, and subsequently went mad and killed herself. 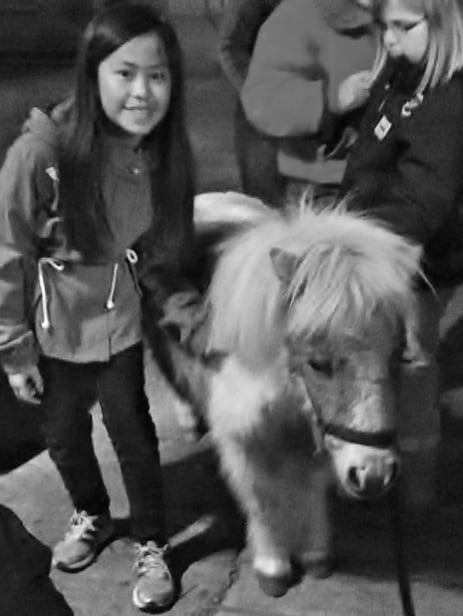 On the night we visited (and probably many other nights), one of the patrons had brought his little horse along. That’s right, a horse! A lovely little Falabella. Naturally, my sister was ecstatic.

The building that now houses the Hotel Provincial used to be a confederate civil war hospital. Blood stains appear on bedding, scenes with doctors and wounded soldiers appear, and moans and groans can be heard throughout the night. In one room, the ghost of a soldier lingers on, desperately trying to pass on a message to his girlfriend. He rather enjoys listening to the sounds of the TV, and is quite harmless. 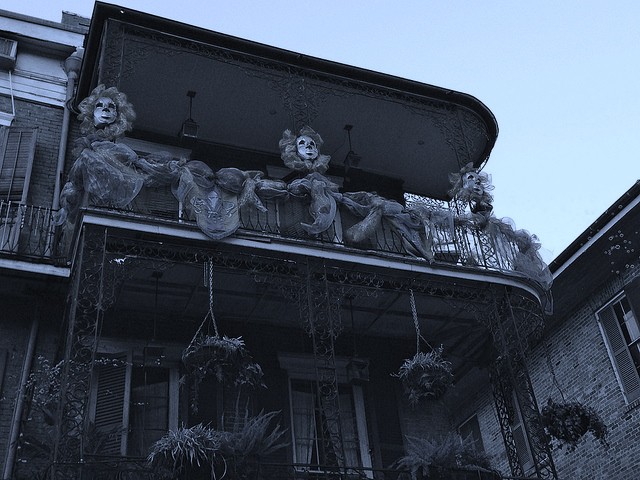 Have you ever been chasing ghosts in New Orleans? Would you like to?

Disclosure: In New Orleans, my mum, my sister and I were guests of New Orleans Conventions & Visitors Bureau. However, I have complete freedom to write whatever I like, as ever.