Chichen Itza: the mouth of the water sorcerer’s well

Last week, I wrote about the 7 wonders of the world – ancient and new. The good people in the Yucatan have Chichen Itza, one of the seven new ones, so naturally I’ve heard lots about it lately. As I’ve listened to locals going on about the new 7 wonders, and particularly their local pride and joy, I’ve considered whether to go. Again. I saw it once, as a mere teenager. Would this magical Mayan place seem different now, so many years later? I decided to find out.

For some (no doubt ridiculous) reason, I haven’t a single photo of Chichen Itza from the 80s. Have I lost the ones I may have had, or did I simply not take any? That’s an open question. What it does mean, is that I must rely on memory. And considering my casual approach to life as a young ‘un, well… we’ll see how that goes.

Chichen Itza then and now: are they two different places? Well, yes. And no. Mexico’s second most visited archaeological site (just behind Teotihuacan), was not particularly crowded on an August day back then. And it isn’t on this fine October day either. Low and slow season now, though, which accounts for the relatively few visitors.

Mayan pyramids were built to be climbed. You only need look at them to understand this. 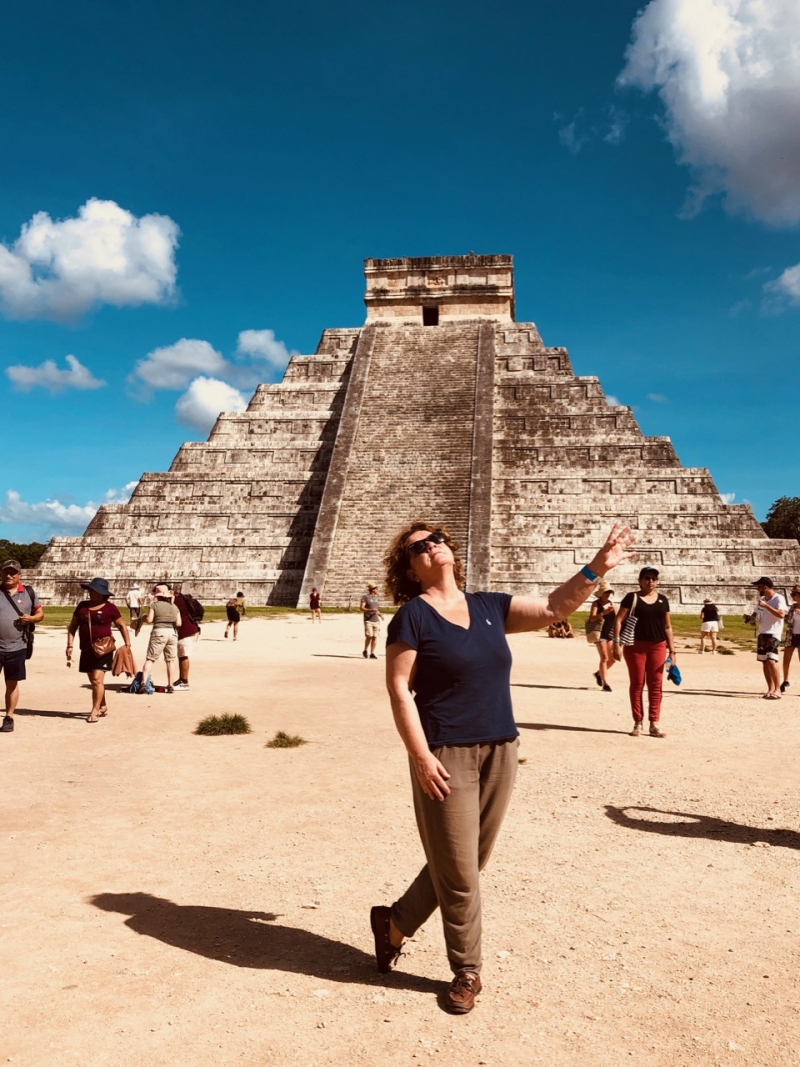 But climbed by Mayas in relatively small numbers and possibly barefoot. El Castillo (Temple of Kukulcan, the serpent god), the step pyramid and most famous of Mayan constructions, used to be climbed by more than a million tourists each year. It has impressive staircases on all four sides, 91 steps on each, together making 365, including the top platform. Designed on purpose?

At spring and autumn equinox, Kukulcan comes to life, i.e. snake-like shadows ripple from top to bottom of the pyramid, then joining gigantic snake heads at ground level. Pretty sophisticated.

My most fun memory from back then, is climbing to the top of El Castillo. The mere 91 steps were not at all strenuous, I recall. On the other hand, my oddest memory is how my legs felt like jelly the entire way down. Going up was a breeze, going down, not so much. I suspect running up in wooden clogs (don’t ask!) had something to do with that. Looking at it now, those stairs look dangerously, yet excitingly steep.

I’m looking forward to repeating the experience, this time with sensible shoes on, or even barefoot if that is required. I plan to sit on top of the pyramid and fancy myself a Mayan chief, looking out over my territory.

Yeah… that is not to be. It is no longer possible to climb El Castillo. Graffiti and erosion have seen to that, but most of all because back in 2006, a sprightly 80-year-old climbed up – and fell down. And died. Falling off a Mayan pyramid at 80. I can think of worse ways of moving on.

Not only is Chichen Itza one of the new 7 wonders of the world, it is also a World Heritage site. Here’s what UNESCO has to say:

This sacred site was one of the greatest Mayan centres of the Yucatán peninsula. Throughout its nearly 1,000-year history, different peoples have left their mark on the city. The Maya and Toltec vision of the world and the universe is revealed in their stone monuments and artistic works. The fusion of Mayan construction techniques with new elements from central Mexico make Chichen-Itza one of the most important examples of the Mayan-Toltec civilization in Yucatán. Several buildings have survived, such as the Warriors’ Temple, El Castillo and the circular observatory known as El Caracol. 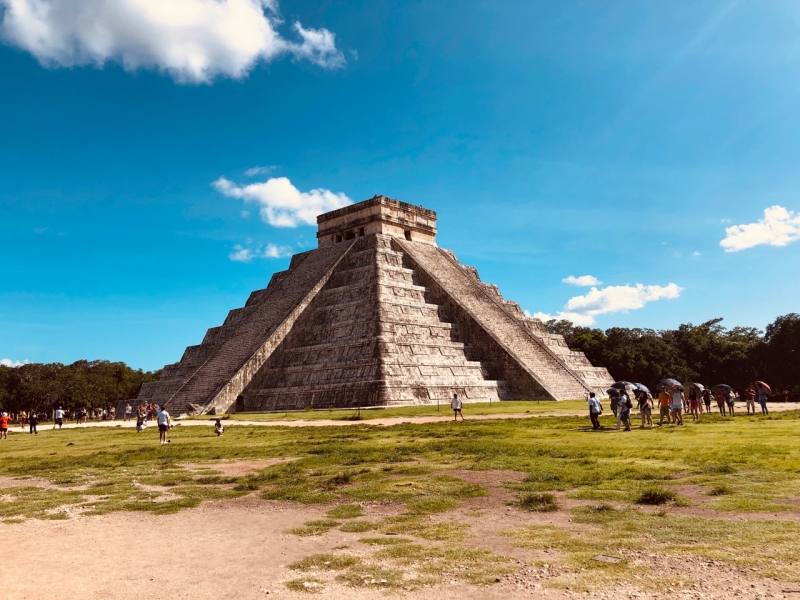 There are several buildings at Chichen Itza: the Caracol observatory, Tzompantli/Skull Wall, the Jaguar Temple, the House of Eagles, the Temple of the Warriors, the Thousand Columns, the Market, the Great Ball Court, the Tomb of the High Priest, the steam bath. And that’s not all. But we must confine ourselves, lest this humble post be miles long. In addition to El Castillo, we’ll have a look at Tzompantli and the Great Ball Court, because they are the ones that caught my attention. There are also plenty of cenotes, fascinating Mayan sinkholes worthy of a post on their own. Coming up. 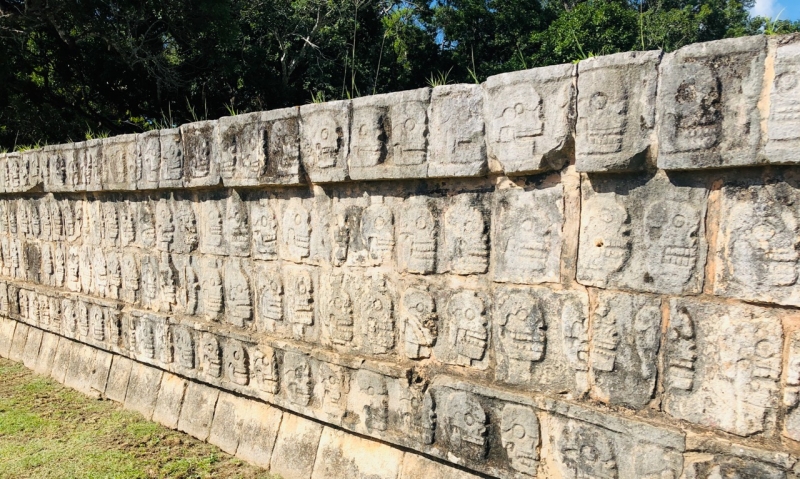 So what we’ve got here is a skull rack. Imagine proper skulls impaled here. Human ones, one on top of the other, vertically along wooden posts. That was Mayan practice. To control people and frighten enemies. Probably a bit of show-off, too. All round this wall are skulls and serpents and men carrying other men’s heads.

Now, the Mayans were keen game players, particularly the Mesoamerican ballgame, also known by the name pok-ta-pok. We learn that winning might have been somewhat of an ambivalent experience. See the hoops near the top on either side? Get the ball through one of these, and you’d score a winning goal. Trouble is, if you did that, you’d be sacrificed to the gods of the day. On the plus side (if you can call it that), it looks pretty difficult to hit that little hoop hole.

So – lose/live or win/off with your head… must have been a tough choice. But how do we know it was the winner who would lose his head, rather than the loser? The gods only wanted the best, we hear. Hm… doing a bit of research, various sources suggest it was the loser who would be sacrificed, and games possibly rigged. On the ballcourt wall, you can see a quite explicit illustration of a decapitated ballplayer. The inscription suggests he may be the loser and model for the Skull Wall. Winner/loser, will we ever know?

At any rate, descriptions of the game suggest it was risky going, even without sacrifice. The rubber balls weighed between 1.4 and 2.7 kg. A contemporary Dominican friar, Diego Durán, reported that players were killed when the ball “hit them in the mouth or the stomach or the intestines”. 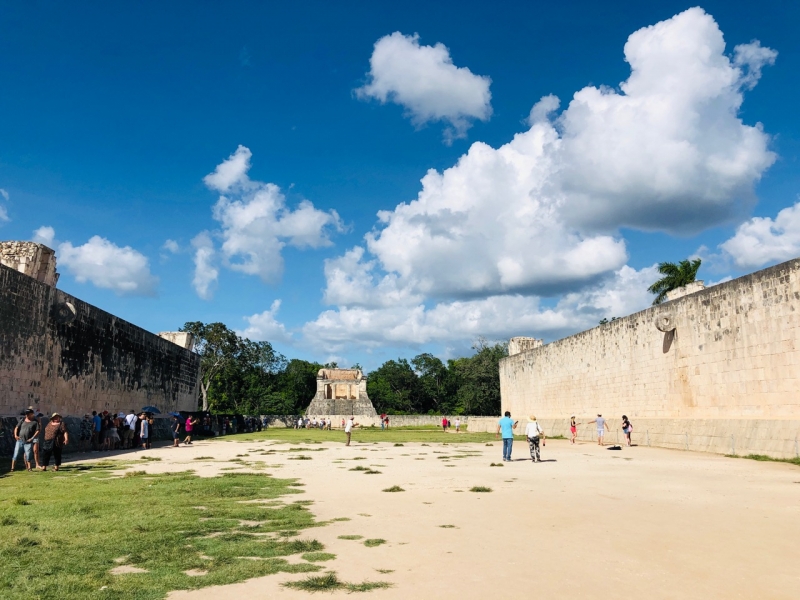 The Great Ball Court at Chichen Itza is the largest in Mexico, 96.5 x 30 metres. Think you could hit a ball through the hole in the ring on the wall? 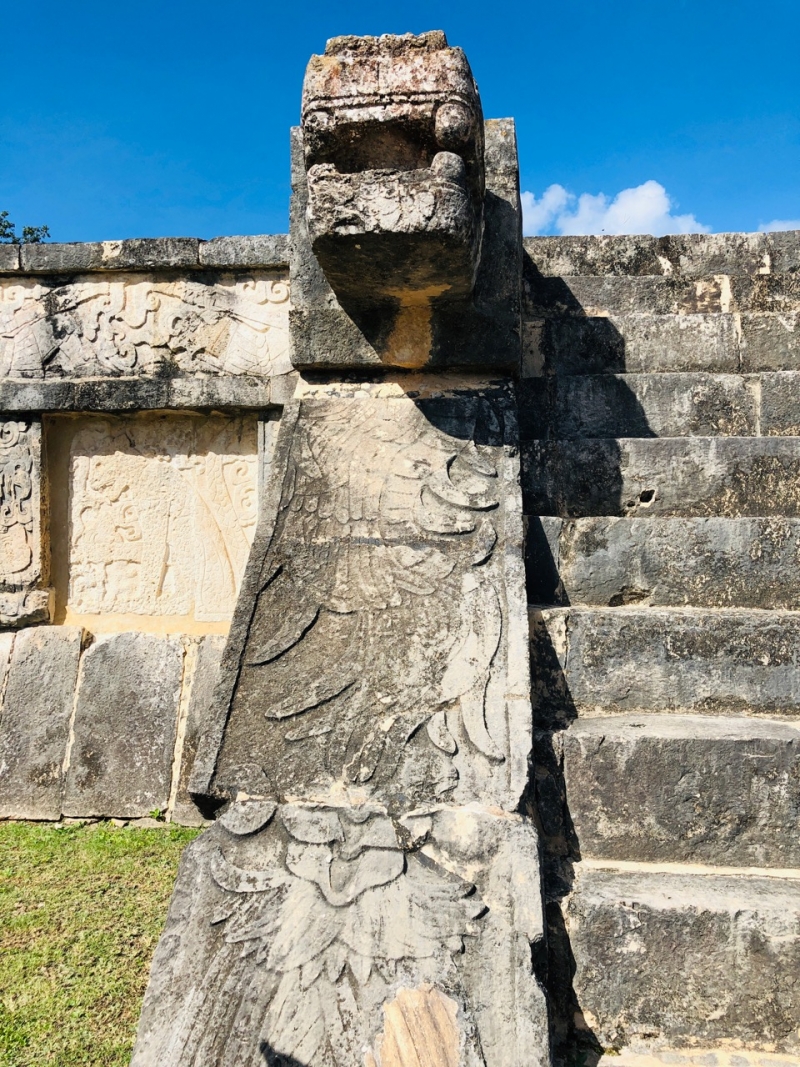 One of the Venus platforms at Chichen Itza. I like to think people danced on this platform. Can’t all be deadly games. Surely.

Well, not jaguars. Not really. Plenty of them about, but they have the good sense to lay low.

Plenty of touts about, too. Not laying low. Locals have to make money, we understand that; offering colourful dishes, table clothes, games, all kinds of knick-knacks for your viewing (and hopefully buying) pleasure. The touts are pushy. Not in your face-pushy, but a sneakier version of pushy. Here I was, determined not to buy anything, particularly as I only have a small carry-on to last me for 16 days in very different temperatures. Yet, I suddenly find myself with a 3-metre-long table cloth in every crazy colour under the sun, and an ugly jaguar whistle. Not sure how it happened. (PS Funnily enough, it doesn’t sound anything like a roaring jaguar when I blow it. Takes practice, I suppose. Neighbours, consider yourselves warned.) 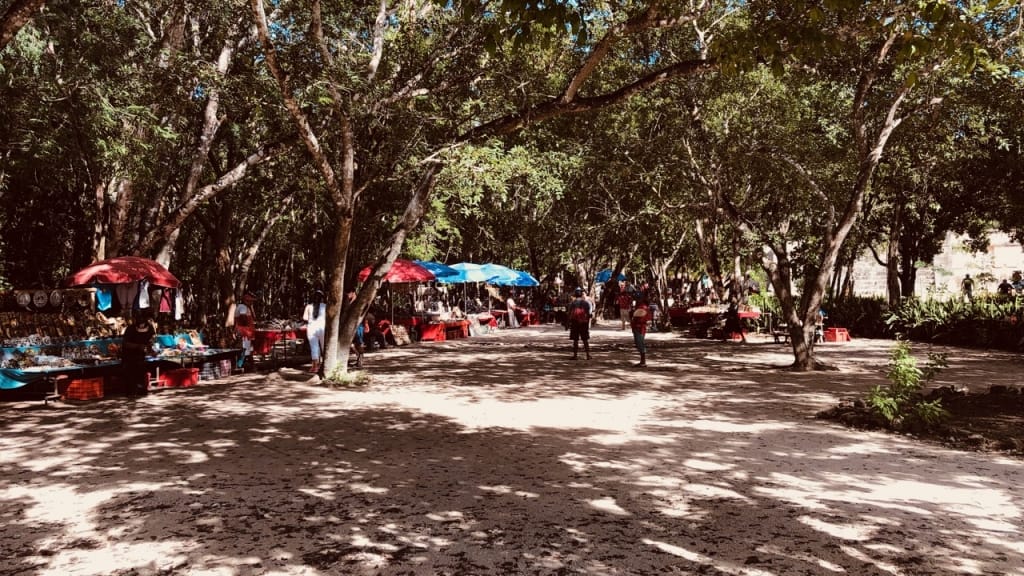 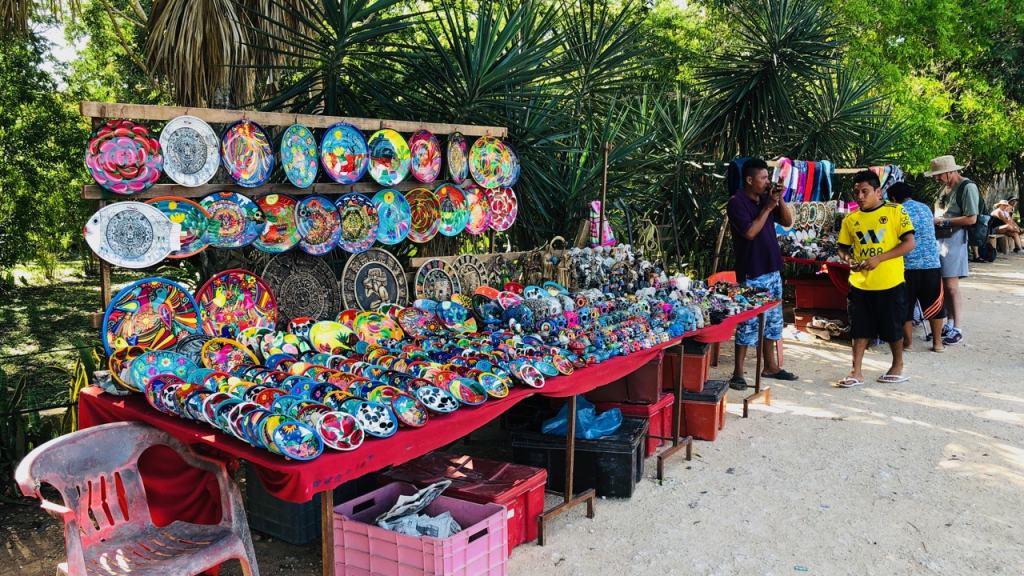 The heading? Chichen Itza means ‘At the edge of the well of the Itza’. The Itza was the dominant ethnic group in this area, and their name again means enchanter/sorcerer of water. So we think.

Building activity seems to have stopped in the 14th century and the city quickly deteriorated after that. This Mayan city was then left in peace until 1841, when it was discovered, and excavations began.

Worth your time? Absolutely. But I hear horror stories of masses in high season. Do try the low/slow one.