Here at Sophie’s World, we love exploring the world’s curious places. Today, I thought I’d share a different kind of curiosity Alex and I encountered in the Seychelles some years ago, a botanical curiosity.

On the island of Praslin is a beautiful nature reserve called Vallée de Mai (May Valley). Not only is this valley beautiful, it’s also quite unusual. Vallée de Mai has a primeval palm forest, and is home to a one-of-a-kind plant endemic to the Seychelles: the mysterious coco de mer. And what is so special about the coco de mer? Well, apart from not growing anywhere else in the world but here on Praslin and on Curieuse, Praslin’s delightfully named neighbouring island, it’s the unusual visual impression. Here’s a female tree: 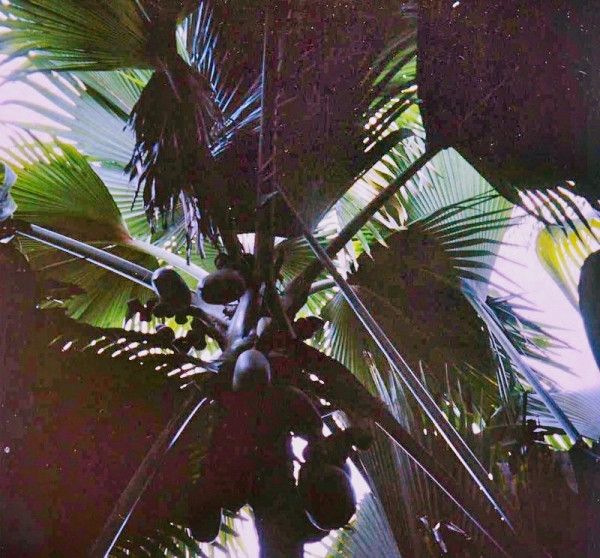 Now, in this old photo the nut mostly resembles a large orb; bit difficult to see it properly. So I rummaged about in my mum’s attic to find this wooden model we brought home as a souvenir, giving a better visual representation of its … erm, extraordinary shape: 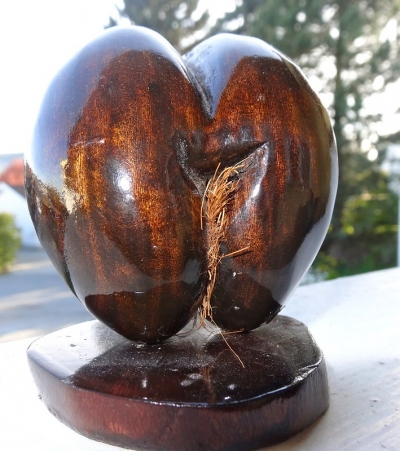 I can easily imagine Mother Nature having a chuckle. In the local creole vernacular, the coco de mer is irreverently known as a coco fesse, a bum nut. It’s the largest double nut seed in the world. It’s also a so-called dioecious species: female and male flowers are found on different trees. Here’s a photo of the male tree: 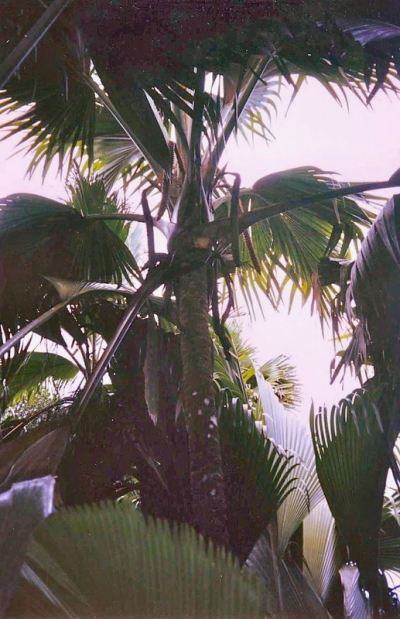 Again, a bit hard to spot (sorry): the male flower is slim, cylindrical and up to 1 metre long.

The coco de mer is one tough nut. Once believed to have grown deep in the ocean, the large, dense canopy blocks sunlight and the huge heaps of dead leaves on the ground prevent weaker competitors from taking root.

That’s not to say the coco de mer is the only plant growing here in Vallée de Mai. There are in fact five other endemic palms, as well as several species of snails, flies and geckos, also endemic to the Seychelles.

Of course a tree as curious as this is bound to be the stuff of legends. In 1881, a British general, Charles George Gordon, thought he had found the Garden of Eden and that the coco de mer was the forbidden fruit of the Tree of Knowledge. The saucy Victorian described the nut so:

externally the coco-de-mer represents the belly and thighs, the true seat of carnal desires

Well, Eve must have been quite the amazon to handle one of these. Even if she picked one from the ground rather than from 24 metres up, the coco de mer is a heavy baby. Weighing up to 25 kg, this is one coconut you don’t want falling on your head.