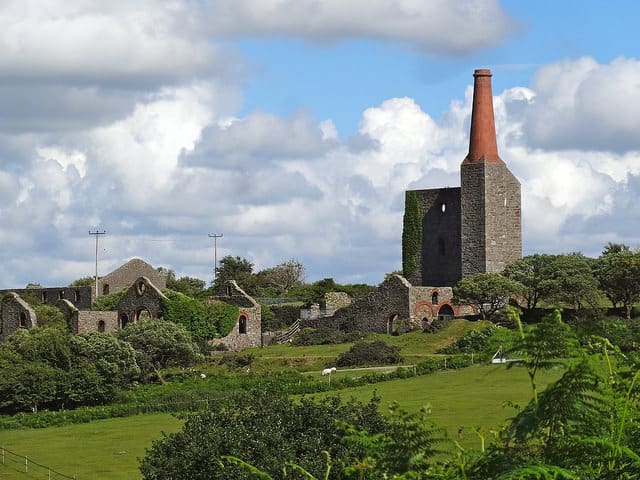 Cornwall is one of my favourite parts of Britain. And not just the curiously captivating fishing villages, but inland, too.

Last summer, Cat spent a few days at horse riding camp on Bodmin Moor. On the way, we naturally used the opportunity to spend another night at Jamaica Inn. And this time, we also had a look at the remaining traces of Cornwall’s mining heritage, the region’s significant contribution to the Industrial Revolution.

Bodmin Moor abound with remnants of ancient times (you can read a bit more about standing stones, ghosts and mysteries in this post). On the moor, you’ll also find the remains of tin mining, a 4000-year-old industry. And copper mining as well. Did you know this area supplied two-thirds of the world’s copper back in the early parts of the 19th century? Here’s what UNESCO has to say:

The substantial remains are a testimony to the contribution Cornwall and West Devon made to the Industrial Revolution in the rest of Britain and to the fundamental influence the area had on the mining world at large. Cornish technology embodied in engines, engine houses and mining equipment was exported around the world. Cornwall and West Devon were the heartland from which mining technology rapidly spread.

The heritage site comprises 10 subsites, spanning from the southern reaches of Cornwall all the way into neighbouring Devon. We visited the subsite Caradon Mining District and stumbled over leftover rocks, old railway tracks, chimney stacks and engine houses dabbled across the ancient landscape.

It’s challenging to reach with public transport, as it’s a bit out of the way, even for already remote Bodmin Moor, but absolutely worth a detour. Alexandra and I loved wandering around here. Cat, lucky girl, got to ride through this gorgeous landscape, but I expect a 12-year-old probably doesn’t appreciate the history quite as much.

Want more fab photos from around the world? Then hop over to this week’s TravelPhotoThursday.