Austria’s newest world heritage site is the frontiers of the Roman Empire, specifically the ancient borders known as the Danube Limes.

Odd word, isn’t it, limes? The Romans didn’t call it that – limes is a more modern term. But what does it mean? Well, when you take a closer look, and forget about English pronunciation for a bit, you’ll see it is quite similar to limits. And then it makes sense.

The Romans, keen as they were to expand their empire, moved steadily northwards. And southwards. And in every direction, really. To the next mountain chain, to the next river. And just along those topographical features, those natural boundaries, they built strongholds to protect what they considered their domain. There are plenty Roman limes in Europe and beyond, around the Mediterranean, as far south as the Limes Arabicus and Limes Tripolitanus (bordering the Sahara) and as far north as Limes Britannicus (better known as Hadrian’s Wall).

Some 2,036 years ago, they reached present-day Austria – or the Celtic kingdom of Noricum, as it was known at the time. And when Noricum became a Roman province, about 600 km of the Danube became the natural frontier. That all needed watching, of course. Along the great river, the Romans built fortresses and watchtowers and established military camps and colonies. 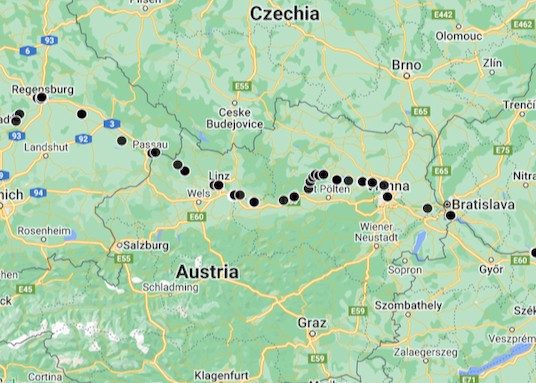 The long Roman frontier along the Danube

Amongst the campsites was Vindobona; ca. 20,000 people lived in that colony.

Much like the Roman frontiers in Germania, not a whole lot is left of the Roman activities along the Danube two millennia ago.  Most of what remains of the structures they built are out of sight; overgrown by fields and meadows, towns and cities built on top of it.

Most of the structures in Austria are below ground – which is good for preservation, but not so good for the general curious populace who wants to have a look.

So where can you see evidence of this long frontier? Turns out it’s right in front of your nose. If you’re in Vienna, that is. 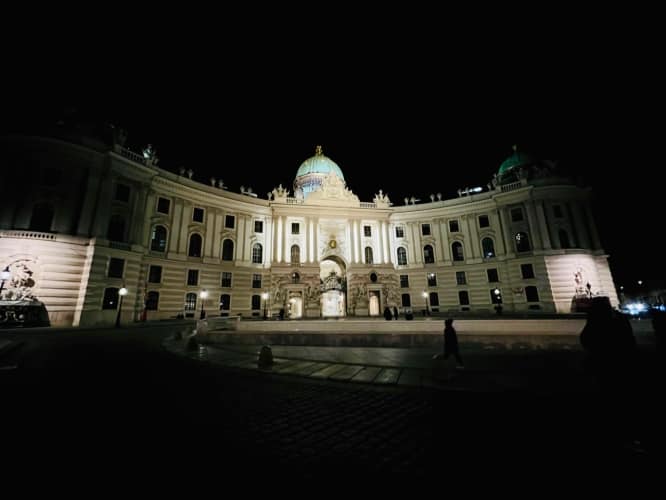 You already figured out Vindobona was Vienna, didn’t you, clever one?

Every visitor in Vienna will at some point wander around the gorgeous historic city centre, typically from Stephansdom and the snazzy shopping street Graben – and up to Hofburg Palace, city digs of those Imperial Habsburgs,

If you walk that way, you will very likely find yourself on a square called Michaelerplatz. And there, right in front of Hofburg, is where you’ll find the remnants of Roman rule – hidden underground, but partly revealed.

What is today the very centre of Vienna, was in Roman times known as Vindobona, where Maximus went to fight, remember? (See how I found a sneaky way to mention Gladiator yet again?)

Quite the journey from a small Roman settlement of ca 20,000 souls to the most elegant city in Europe – which, when it comes to style and elegance, is synonymous with ‘in the world’. Because, let’s face it, the new world might have cool, fun and creative cities, but – perhaps with a few exceptions – elegant cities is pretty much an old world phenomenon. Feel free to disagree. I’ll leave the comment section open for once, spam be damned. But I digress. As I often do. 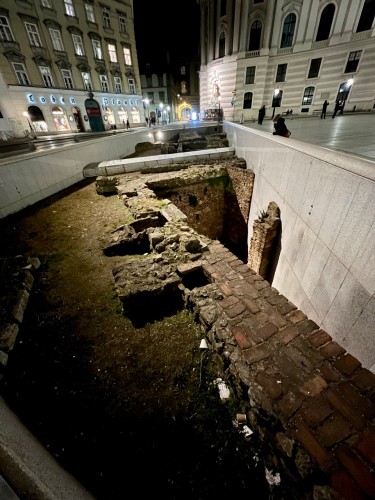 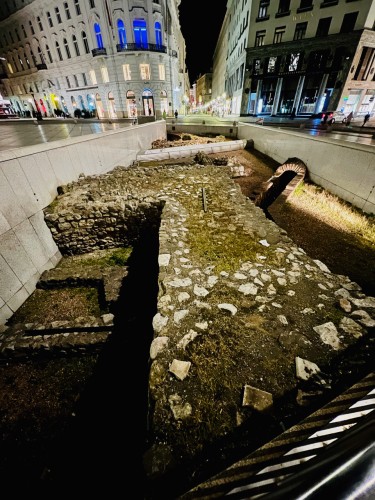 What’s left of Vindobona are walls of Roman villas. Note that there are medieval walls here as well – and even more recent ones. It can be difficult to differentiate, especially on a dark winter night. So look closely and read the info boards to see what’s what.

There are more vestiges of Vindobona in Vienna, too. Also in the inner city, just north of Stephansplatz, is Hohe Markt (High Market Square). Under the ground here are the ruins of two Roman tribune houses (officers’ quarters), divided by a road. Pieces of the ruins are now visible, as part of the Wien Museum: Römermuzeum. You can even see a fragment of a tablet granting Vindobona city rights as early as 2,000 years ago.

If you want to see even more traces of Roman times in Vienna, visit the basement of Berufsfeuerwehr Wien, the grand fire station building Am Hof, to see a bit of the ancient canal system.

Next time I drive from Vienna to Bratislava, I will stop in Römerstadt Carnuntum, where the Roman ruins have not been built over. Should be interesting to see. Will get back to y’all with an update.