Like last week, this week’s Friday photo is from Switzerland. Also like last week, it refers to an important international venue. 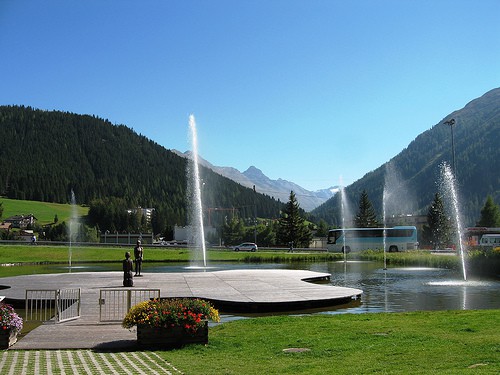 I was recently in Geneva where, somehow, business and money seems to be visible everywhere. There’s much more to Geneva, of course: it’s a humanitarian city, home of the UN, the evocative Red Cross and Red Crescent Museum and the exciting CERN. Furthermore, it has a charming old town, nice cafes in Carouge, beautiful walks along Lac Leman (Lake Geneva), and is just an all-round nice city. But there’s no getting away from it: money, banking and business is in focus. That’s even more apparent in Davos, these days host of the annual World Economic Forum for the 40th time. Normally, competition has been a major focus of the World Economic Forum. Bit old world, isn’t it? How about focussing on creativity instead?

So I’m happy to see that global cooperation and transformation is on the WEF agenda this year. The headline reads: Improve the State of the World. Subjects to be discussed include strengthening social welfare and ensuring sustainability. There’s even a session called Rethinking Market Capitalism. Dare I hope something good might have come out of the economic crisis? A permanent shift in focus?

Haiti is also on the agenda, of course, represented by one William J. Clinton, who leads a session on how business can help Haiti in the aftermath of the earthquake.

As a side note, if you polled Europeans as to who has been the best US president, Bill Clinton would probably come out near (if not at) the top. What is it Europeans see that Americans don’t? Or vice versa? During the 8 years of infamy, one European country faithfully stood by the USA (and even seemed to not mind Bush so much). That country was Kosovo, and even that was because of the same William J. Only a few months ago, yet another Bill Clinton statue was unveiled in Pristina. Kosovo is still in love with him, it seems.

Back to Davos; it’s not my fave Alpine village, but to be fair, that’s based on a very short visit. Back in 2006, I stopped briefly in Davos on the way to Klosters which I much prefer. This year, I noticed Klosters is co-listed as venue of the World Economic Forum.

Interestingly, in 1893, Sir Arthur Conan Doyle stayed in Davos for a while. A skiing pioneer, he was, predicting that Englishmen would flock to the Alps to ski in the future. How right he was. A few years ago, the Independent had an entertaining article on Conan Doyle’s stay in the Alps. An altogether interesting man.

I’m reminded of that fateful episode where Sherlock Holmes succumbs to the evil professor Moriarty and finally kicks it in the Reichenbach Falls. Those falls are in the Bernese Oberland. But perhaps the Davos area served as inspiration for part of the story? Davos is undoubtedly beautiful.