We’re at Deir el-Bahari, at the death temple of female pharaoh Hatshepsut. 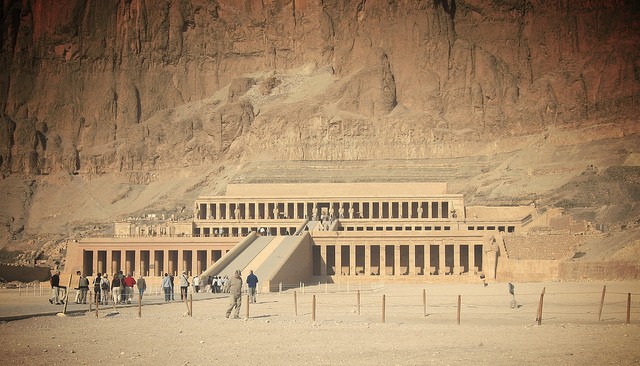 Hatshepsut’s temple is magnificent. The architect Senmut built it, perfectly harmonising with the surrounding nature. The temple has three terraces carved out of the cliff and connected by ramps.

Not much else is left from Hatshepsut’s reign. Her stepson, it is thought, had her killed and he went to great lengths to have her name expunged from history. But there’s still the obelisk at Karnak – and possibly the unfinished one at Aswan.

Egyptologists consider Hatshepsut a very successful pharaoh, reigning for more than 20 years. She was more concerned with peace and trade, less with warfare. Leading a trading expedition to the land of Punt – in present-day Somalia – she brought home the good stuff of the day: spices, gold, ivory, ebony, frankincense and myrrh. What is really myrrh, you ask? Well, I ask, at least – and Wiki has the answer, in case you’re interested.

To accommodate tourists of the laziest kind, there are little trains called taf tafs which run between parking lots and the temples here at Deir el-Bahari. It can’t be more than a couple of hundred meters to walk, but everyone takes the taf taf.

It’s an amazing temple – one where I could easily wander around for hours. Again, it’s easy to picture Hatshepsut walking around here herself – admiring her own temple, as I’m sure she must have done.

A more sobering thought sends shivers down my spine. In a much less remote past, on 17 November 1997, to be precise, a horrific massacre took place at this very spot. Six terrorists dressed as security guards went on a 45-minute killing spree with knives and automatic guns, brutally slaughtering 63 people, mostly Swiss tourists. A little 5-year-old British girl was amongst the victims. They were trapped in the temple, some attempted to hide behind columns. Absolute terror. At this very spot, on the middle terrace. At this time of day. It’s as if someone’s walking over my grave.

To end this entry on a more cheerful note, Hatshepsut’s mummy was found and positively identified recently. Very exciting!

Deir el-Bahari is part of the UNESCO World Heritage site Ancient Thebes with its Necropolis.