World at a Glance: Digging for crystals in Jet 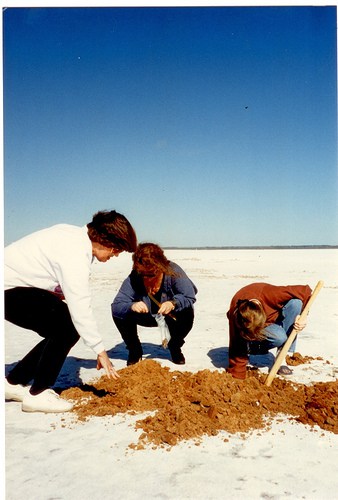 Where do you think this salt flat is? The famous Salar de Uyuni in Bolivia? The Chott-el-Djerid in Tunisia? Bonneville Salt Flats in Utah?

Last time I was in Oklahoma, my American mum (my host mother from when I was an exchange student), was showing me around the western part of the state, when she announced we would stop and dig for crystals in a great salt lake.

Salt lake? That’s unexpected, as Oklahoma is far away from the sea. But that wasn’t always so. Millions of years ago, during the Permian Period, this area had mountain ranges and was covered by an ocean. (Standing on the flat, dry plains of Oklahoma today, both are a bit difficult to visualise). Over time, the mountains wore down and the sea water evaporated, leaving thick layers of salt. The salt helps form a rare and unusual type of selenite crystals, found nowhere else in the world.

Now, this is Oklahoma, so of course we drive onto the salt flats. We also wander along on the salt, sit on it, become nearly blind staring at it, and – dig for crystals.

Apart from salt and crystals, the Salt Plains National Wildlife Refuge is home to more than 300 species of birds, including the endangered whooping crane. This is classified as the largest saline flat in the central lowlands of North America and yet, it’s hardly famous. Why not? You tell me.

Next time you’re passing through Oklahoma, don’t just pass through. Bring your shovel – you can dig for crystals between 1 April and 15 October.