Tired of hanging in Dublin’s pubs?

Of course you aren’t. But if for a few hours you want a cool alternative, give the Dublin Ghost Bus Tour a go, a deliciously kitschy journey through Dublin’s dark history. 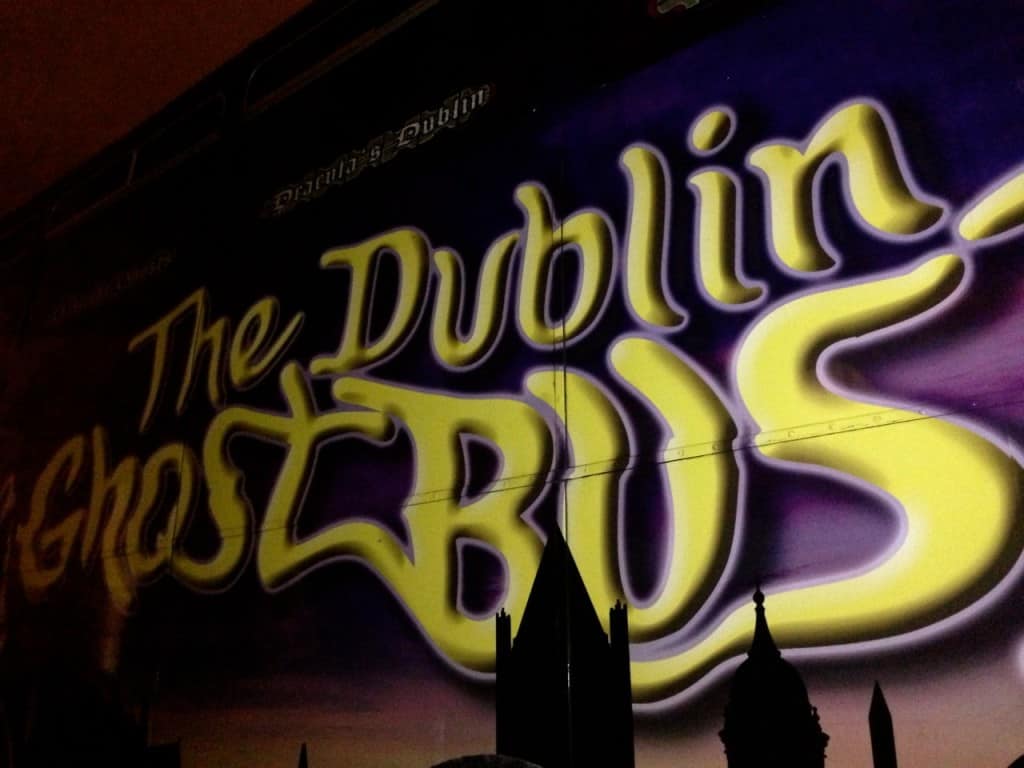 At 9.30 pm on a rainy October evening, I enter the purple double-decker, weaving my way through cobwebs and severed heads before heading upstairs into a Gothic red-light atmosphere with suitably spooky music and blackout curtains covering the windows. As we set off on our spectral tour through the dark streets of Dublin, Vincent enters, our ghostly guide for the night. Throughout the tour, he alternates between being a narrator, a mad doctor, an even madder monk and a singer.

Hope you’re not afraid of being brushed by strange hands in the dark. And if you’re a risk-taker you may want to sit in seat 13. Then you might be chosen to answer 5 scary musical movie questions. If you know the answers you’ll win a copy of Bram Stoker’s famous book. If you fail, Vincent will kill you. 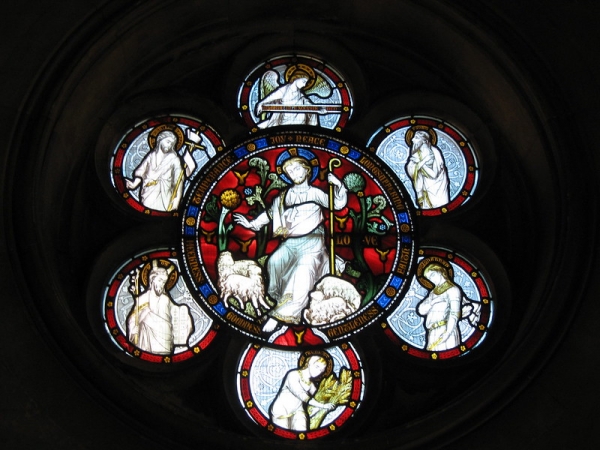 Just kidding. But that leads us all nice and smooth to Dracula. As we pass Trinity University, Vincent rattles off numerous authors that were once students at this 420-year-old hall of learning. They include Jonathan Swift, Samuel Beckett, Oscar Wilde, and, not least, Bram Stoker.

The author of one of the world’s most famous thrillers was born in 1847 in Clontarf here in Dublin. He lived in a house on Kildare Street. For a moment, we’re allowed to draw the curtains and have a look at his house. It’s all offices today, only a black, circular plaque marks the connection to the vampiric author. But sometimes, late at night, midnight-oil burning office workers feel a chill in the air and see a tall bus crawling slowly past, 20 pairs of eyes staring at the house. Mwahahaha.

So how did the good Mr Stoker conceive of a vicious vampire living in the mountains of Transylvania? He had never been there, after all. Had some supernatural force presented itself to him? In a dream, perhaps? Well, no.

But then again, yes. If you consider a mother to be a supernatural force (and I assure you, we are). You see, Bram’s mum, Charlotte, was from County Sligo, and a bit of a storyteller herself. Mum Stoker enjoyed telling bloodcurdling tales of the walking dead of Sligo to her sickly little son at bedtime. 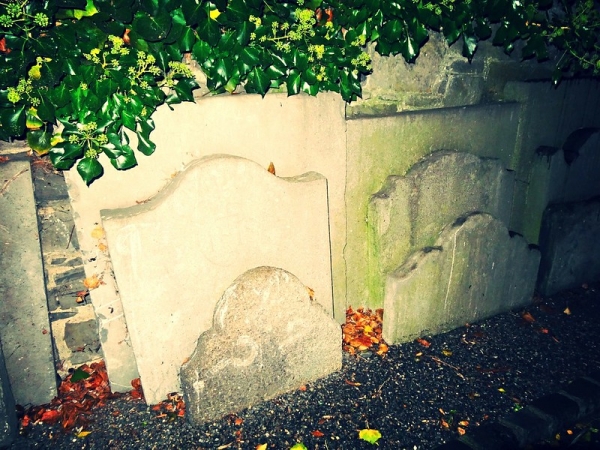 A bit later, we pass the Royal College of Surgeons. A prestigious medical school today, but in the late 1700s, it was the haunt of a Dr. Clossey, who ran a school of anatomy. Dr. Clossey bought his bodies from opportunistic stiffie lifters. Now, he wasn’t a great believer in the after-life, the not-so-good Dr Clossey. We are nothing more than decomposing meat, was his assertion, and he enjoyed showing his students exactly that when slicing up the corpses. According to rumour, he still roams the hallways of the college with a pail of human organs.

The Shelbourne is next, my favourite afternoon tea spot in Dublin. All the times I’ve had a cuppa in this venerable establishment, I never knew Mary Masters’ ghost was meandering about. The poor child was ridden with tuberculosis, we’re told. In the 1960s, Sybil Lee, a psychic, had a good talk with Mary. We’re treated to a recording of a little girl’s voice. Suddenly I hear her calling my name. I’m about to answer yes.

Then I realise it wasn’t meant for me. Mary, the poor dear, is calling out to her dead sister, Sophie. Eerie!

They must have lived in one of the houses that eventually became the Shelbourne. Mary still haunts the hotel, specifically a room on the 5th floor. Vincent won’t tell us which room – it’s bad for hotel business. However, I have it on good authority it’s room 526. I have a sudden urge to spend the night and perhaps meet Mary. And Sophie.

Saved by the bell

As we pass by St. Patrick’s Cathedral – where among others, Jonathan Swift is buried beneath the floor – we learn the origin of the expression ‘saved by the bell’. And no, it has nothing to do with school bells. Rather, it was a helpful measure for people who might have been buried alive. A thread was wound around the dead (or supposedly dead) person’s finger, which was attached to a little bell on the outside of the grave. So if one day you found yourself six feet under, and you were still breathing, you pulled the thread and the bell rang. If you were lucky, someone heard it: saved by the bell.

One person who found herself buried alive in St. Patrick’s Cathedral was a young woman known as the White Lady. Soon after her wedding, she fell into a catatonic state. This is where pulse and breathing slow down and one might be mistaken for dead. Not all that uncommon, a few centuries back.

As a grave robber came to pinch the wedding ring off her dead hand, she woke, no doubt frightening the poor creature. Even poorer Lady; life after death was apparently not all it was cracked up to be. As hard as she tried, she couldn’t convince her husband it was really her, alive; so she lived in solitude for another 20 years or so before she finally died. For real this time. Naturally, The Lady in White still pursues her cruel husband here at this cemetery.

At our first stop of the evening, Christchurch Cathedral, we’re met by the grim reaper himself. 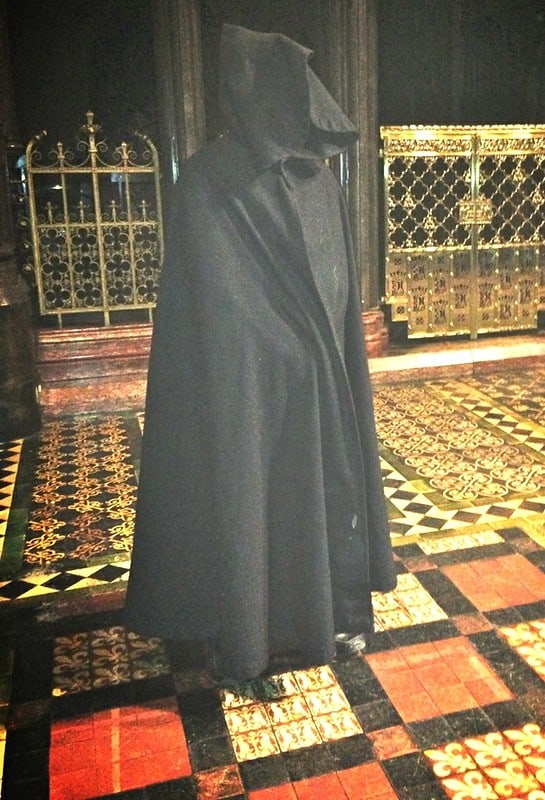 We hear about the bold Strongbow, and about the grave robbers and, ahem, working girls, of Dublin’s past. And we learn about Laurence O’Toole, Ireland’s 12th century patron saint, whose heart was stolen from this very church just last year. Imagine that. What do you do with an ancient heart?

Back in the bus, Vincent is back in interactive mood. He stabs a pin into a voodoo doll, causing driver Francis to scream below. A passenger is asked whether there’s anyone she want to take revenge on. She looks quite happy to pierce the doll straight through the heart.

At St. Kevin’s Graveyard, it’s out of the bus again. We hear of a woman on one of his tours, who spotted a young boy, 5 or 6 years old, with sandy hair, appearing near these grave stones here. 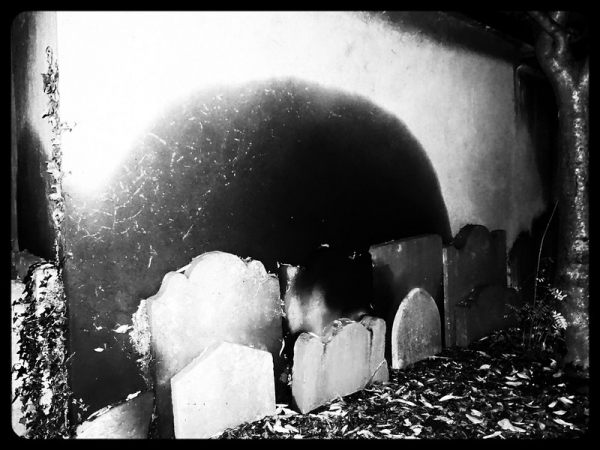 As it turns out, a small boy was murdered here in 1961. A boy with sandy hair. 52 years later, the murderer still isn’t found.

Around a corner by the ivy-covered ruins, Vincent digs out a hook, demonstrating with a not-entirely-willing volunteer, the best way to snatch a body from the grave. To receive the 6 guineas for a complete corpse, one had to be careful. Scratch it and the price would drop to 3 or 4 guineas. The best was to hook the body under the chin, as the jaw is strong, and lift it up from the grave. 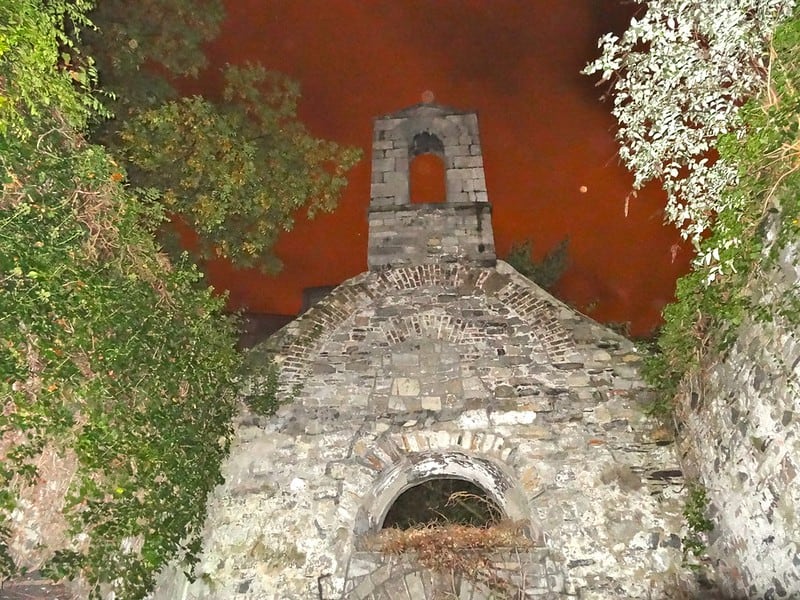 Want to hop on the phantom bus yourself?

Disclosure: My ghostly lift was courtesy of Fáilte Ireland and Ghostbus Tour. As usual, I have complete freedom to write whatever I want – or nothing at all.