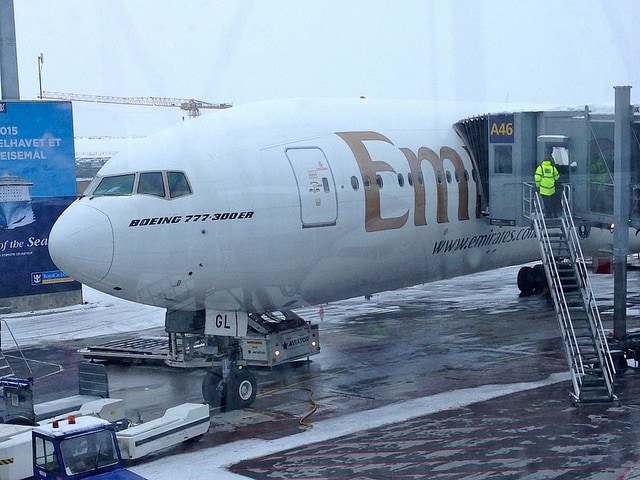 On a cold February day, I boarded an Emirates flight from Oslo to Dubai, to swap snow for sand for a few days. The 6.5-hour flight is served by a Boeing 777-300ER, on a route that has only been in operation for a few months. I was here as a guest of the airline to test the service.

Seated in Business Class, I was in my own comfy cocoon. There are partition walls between the seats, head height, for privacy when seated next to a stranger – or to lower when with a friend or family member (or perhaps a particularly interesting stranger). 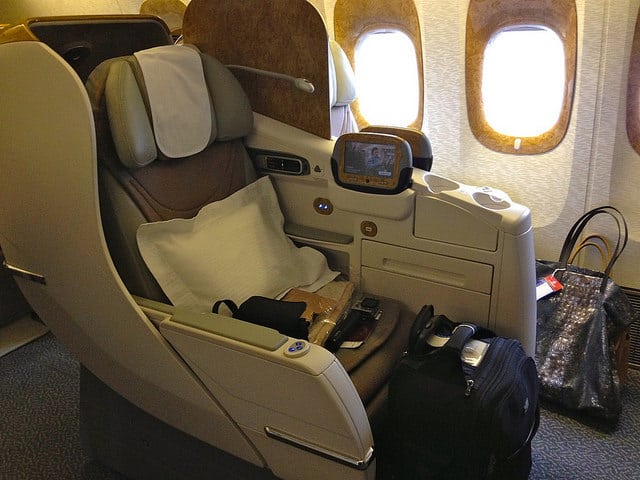 The business class section has 7 seats across in a 2 – 3 – 2 configuration. I was in 6F, an aisle seat in the mid-section of the first row. The seat is 20.5 inches wide; enough room to stow the fluffy pillow and blanket and then some. When I’m sitting in Economy, the pillow and blanket usually end up on the floor, which makes everything a bit messy.

The seat and armrests have plenty of storage room for hand bags, books, phones and other little odds and ends. There’s also USB-ports for charging all the necessary devices (business, remember). There was no wifi, which was fine with me; I was going to be watching Liam Neeson anyway. But for the business traveller this might be a drawback. There was wifi on the return flight.

The seat has a footrest and everything in between, but isn’t quite fully flat, so you sleep (or in my case, laze and watch films all day) at a slight angle. That didn’t bother me one little bit, but it might have if it had been a night flight.

Emirates employs crew from more than 130 countries. On my flight, the captain was Norwegian and my main flight attendant English. Before take-off, she served me a glass of lovely Veuve Cliquot. Hello Mrs Redisch, she said. Oh no, was my first thought. Is she going to do that the entire flight? I know the gesture is meant well, perhaps even complimentary, based on some psychology that says people like to hear their name or something. I find it more annoying than anything else, and when it’s said in every second sentence, it can be downright invasive. Fortunately, that was not the case here. The flight attendant only called me by name the one time. Irritation avoided. 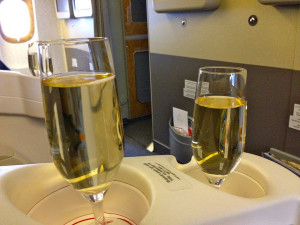 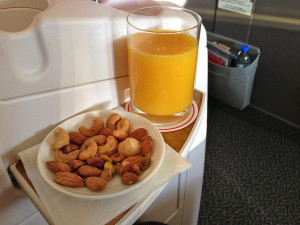 She then explained all the buttons in and around the seat; quite a few to play with, including a cool touch screen control in the armrest and a massage function!

Soon, drinks were served again, along with a bowl of warm nuts. Took me about a minute to scoff it all. Luxurious hot towels were handed out several times during the flight.

There was a toiletry kit, I’m sure. I meant to check for one, but didn’t immediately find it. And as Emirates’ Oslo – Dubai route is a daytime flight, I didn’t really need one, so I simply forgot about it. Sorry, all.

Shortly after take-off, lunch was on. Well, lunch… a 5-course dinner, more like it. The courses were served separately and on a starched, white linen table cloth, as one expects in Business Class. Here goes:

For starters, a choice of

For mains, a choice of

Cheese and dessert courses, a choice of

Naturally, there was a well-stocked bar – aperitifs, wines, cocktails, cognacs, whiskys, etc – to go along with everything. I mostly stuck to champers.

I started with the gravlax, skipped the soup, but had the salad. For mains, I had the roast chicken, followed by apple tart, coffee and Godiva chocolates. Everything was utterly delectable, and just right. 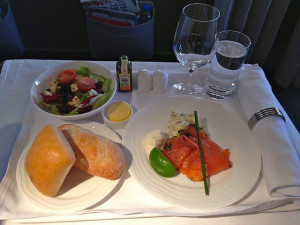 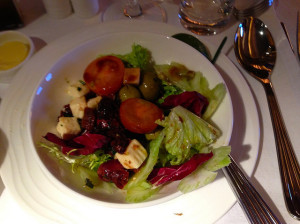 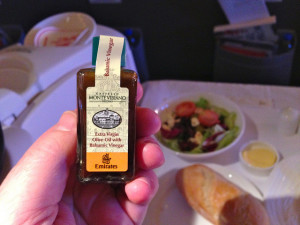 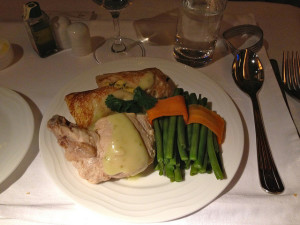 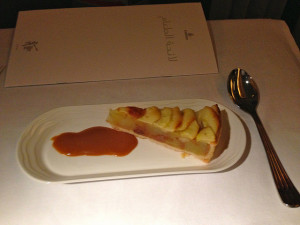 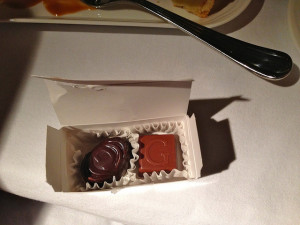 Also, everything was handled at my speed, as opposed to having things whisked away too soon, or which is too often the case, left-overs left on the table and in the way long after I’ve finished.

Movie time! I never seem to find time to go to the cinema at home any more, so catching up on recent films is one of my favourite activities on long(ish)-haul flights. Also, I like to follow along on the moving map and see the world as it’s seen from the flight deck.

Emirates’ award-winning in-flight entertainment system, ICE, took care of that. I had a 20-inch digital wide screen on the wall in front of me, which I could operate either by the touch screen or by a wired remote control. ICE has a whopping 2000 channels on offer – 2000! – including live TV, all the usual suspects in series, and best of all, heaps of recent and classic films. I saw Third Person and The November Man.

A great perk is the noise-cancelling headset. Normally, I’m not too bothered by engine noise, but when I took the headset off, I discovered just how incredibly loud plane engines actually are. But after about five minutes, all was back to normal. Such a flexible thing, the mind.

As lights were dimmed (apparently some people wanted to sleep, gah!), stars appeared in the sky above me. No, it wasn’t an out-of-body experience, but special Emirates ceiling lights. The effect was very cool, reminiscent of the desert at night.

Of course all this comes with a price tag – on Emirates as on all other airlines. That said, Emirates’ Business Class prices can be surprisingly affordable. In Norway, at least, Emirates has a reputation for being a luxury airline. Many hop straight to budget airline Norwegian who has flown the Oslo – Dubai route for many years,; they don’t even bother to check prices elsewhere.

This is a mistake. Emirates often has better prices, even before you factor in all the extra costs (bags, check-in, food, etc). As a further example, I flew Oslo – Singapore shortly before Christmas and Emirates had the absolute the best price. (As an aside, I discovered 2 x 7 hours (Oslo – Dubai; Dubai – Singapore) was much more comfortable than 2 + 13 hours, as is often the alternative when flying from Europe to South East Asia.)

Business Class on Emirates is just what it says on the box: a service for people needing to arrive fresh for a day’s work – and for those who enjoy extra perks and services when going on holiday.

Have a ticket in Emirates Economy Class? Before departure, check at the airport ticket office whether there are Business Class seats available on your flight. You may be able to score an upgrade at a low price. You’ll miss the chauffeur-driven service, but still…

Finally, here’s an inflight selfie to show I was actually there, you know… 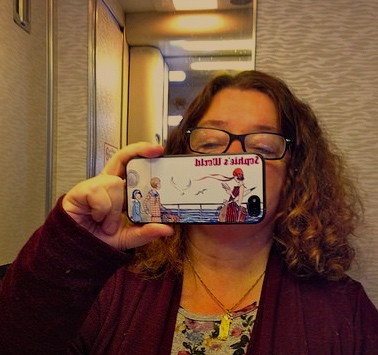 As you might know, we’re passionate about animals here at Sophie’s World, domestic and wild. Emirates recently placed an embargo on transport of elephant, rhino, lion and tiger hunting trophies, the second airline (after South African Airways) to do so. Major kudos!

Disclosure: On this flight, I was invited by Emirates to test the Business Class service on the new route. On the Oslo – Singapore flight 2 months earlier, I was a guest of my own wallet. Whoever pays my way, I retain full freedom to write whatever I want.