Exploring the temple at Edfu

No wake-up call this morning. During the night, we passed the locks at Esna and sadly missed that, but we’re going back down river later, so no worries. There was talk of hustlers in boats throwing their wares on board at Esna. Cat, my youngest, is excitedly anticipating that on the return trip. After a wonderfully lazy morning, we’ve gone ashore at Edfu. 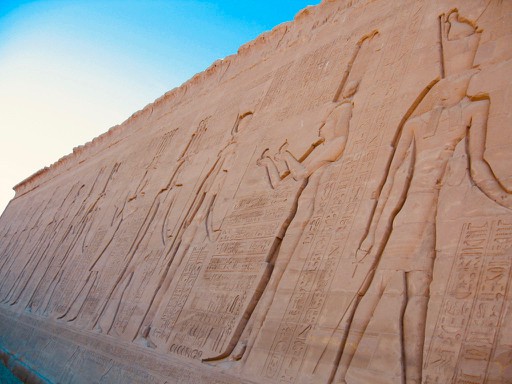 Up river from Luxor, about 100 km, is Edfu Temple, the best preserved in Egypt, perhaps in all of antiquity. Edfu Temple is from the Ptolemaic period, a mere 2200 years old or so – hardly any age at all in this land. In fact, this large temple is built on the site of an older temple, from the New Kingdom.

The pylon is impressive: 56 metres high, taller than the one at Karnak but not as wide. It’s difficult to imagine this temple covered almost to the ceiling with sand, as it was when discovered in the mid-1800s. It must have been stuffy, claustrophobic. The ceilings of the hypostyle hall (a hall with a roof supported by columns) are decorated with astronomical motifs. But people through the ages have sought refuge from the weather in here and the ceiling has been damaged by smoke from their cooking fires.

Edfu Temple is dedicated to Horus, the falcon-headed god. Horus, in case you’ve forgotten, is one of the most important Egyptian deities. He’s god of the sun, god of war and protector of Egypt. Horus is also son of Isis and Osiris. When Osiris is killed by Set, his widow asks their son to protect Egypt from this vicious creature.

The famous battle between Horus and his arch enemy is depicted along the walls here, as a conflict between a hippo and a crocodile. And how do we know that’s what it means? Because of the Edfu Project at the Archaeological Institute at the University of Hamburg, who has taken on the task of translating the hieroglyphs.

I really enjoy Edfu Temple. It’s less overwhelming than Karnak and much more intimate. Even though – or perhaps because – it’s afternoon, our little group has the grounds mostly to ourselves. We hava plenty of time to amble about on our own, touching the ancient walls and carved drawings, imagining those that inscribed them. And deciphering a few hieroglyphs of our own. 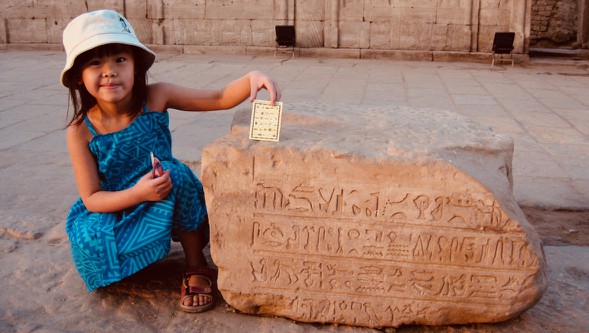 Have you visited the sights of Ancient Egypt? If so, which was your favourite?