Like many fellow travellers, I like to explore UNESCO World Heritage sites. There’s just something about a place that has been deemed so important it requires special protection for the future, for my children to experience, for their children again, and for generations long after I’m gone.

I got into a discussion a few days ago, on whether these sites should be considered mainstream attractions and thus not as interesting for those who prefer going way off the beaten path.

I think not! The Tower of London, the Banks of the Seine, or the Historic Centre of Florence may not be off the beaten track, but what about the ancient kingdom of Dilmun? The dead monks in Kyiv? The Stone Age rock carvings far above the Arctic Circle? The Hanseatic city of Visby or the Forest Cemetery in Stockholm?

In fact, glancing at the list of the ever increasing number of UNESCO properties (962 in 2012), I’d say the majority are rarely to be found on any grand tour. Mainstream or not, though, I’ll happily continue to explore the protected sites, both the obvious, easily accessible ones – and the more curious ones. There’s plenty to choose from. Here’s one: 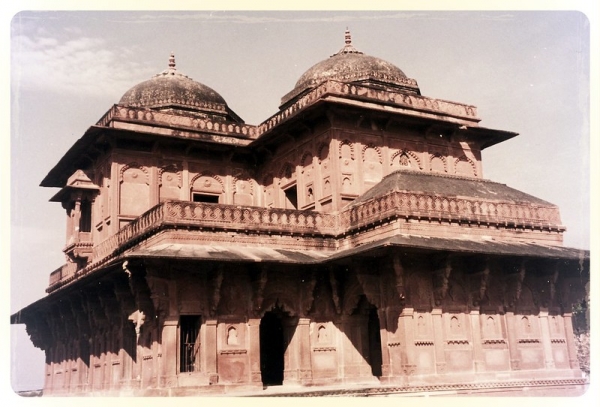 Many years ago, in New Delhi, a friend and I decided to splurge on a car and driver to take us to Agra to see the Taj Mahal at sunrise. A gorgeous experience! On the way back to Delhi, the driver suggested we stop in Fatehpur Sikri. Why not, we said. It was a gruelling hot day, the car’s fan wasn’t working properly; we welcomed a chance to get out for a bit. Neither of us had any idea where – or even what – Fatehpur Sikri was.

Turns out, it’s a ghost town. And not just any ghost town: for a brief time, Fatehpur Sikri was the capital of the Mughal Empire.

The English spelling of the name may be more familiar. Even today, a mogul signifies a person of power, like a media mogul. Well, this is where it comes from. The Mughal emperors were direct descendants of the fearsome Gengis Khan and of Tamerlane – powerful indeed.

Emperor Akbar, builder of Fatehpur Sikri, intended it to be the most beautiful city ever built. And for a while it was. But style must have won over substance. Beautiful yes, but no easy access to water. A few years after it was completed, the town was abandoned and the capital moved to Lahore in present day Pakistan.

One of the world’s most famous buildings, the very essence of romance, Taj Mahal, was built by the Mughals. And here – only 40 kilometers away – is Fatehpur Sikri, obscure, lost, a perfectly preserved ghost town. 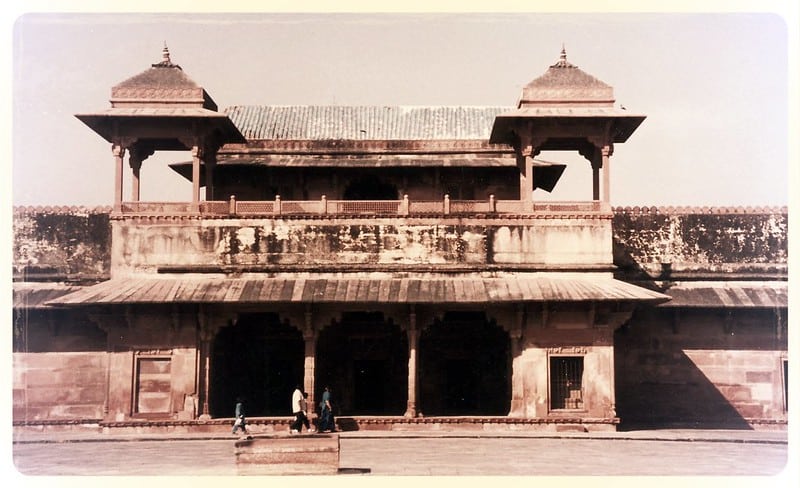 It’s rare to be alone most anywhere in India. That day, we had the complex practically to ourselves – just a few Indian tourists and the usual gang of young local boys running around us offering to be our guides.

I love wandering about abandoned cities, trying to picture those that were once here: sounds of chatter, children laughing, a dog barking in the distance. It’s meditative, in a peculiar way. Fatehpur Sikri was no different. For a few minutes that day, I forgot all about the Indian midday heat, the merciless sun bearing down on my freckly shoulders. For a few minutes that day, I was deliciously lost in the 16th century,

Sadly, the photos don’t do this town justice – scanned prints, very few of them, and taken in the noon day sun with a mediocre camera. I’ve learned a thing or two about photography since. However, I wanted to turn your attention to this unsung UNESCO site for a minute, so middling photos will have to do. (I’ve used Flickr’s simple editing tool Aviary to add a vintage touch. Just because I liked it.)

When you visit Taj Mahal, I hope you’ll make a little detour to have a look at Fatehpur Sikri.

Have you visited a ghost town? Where was it – and how did it feel?