This morning we awaken to the sound of donkeys’ hoofs clicking along the early morning streets of Aswan. Cat and I are off to see if there are any child-friendly spots, (i.e. playgrounds) in this Southern Egyptian city, and later to felucca sailing. 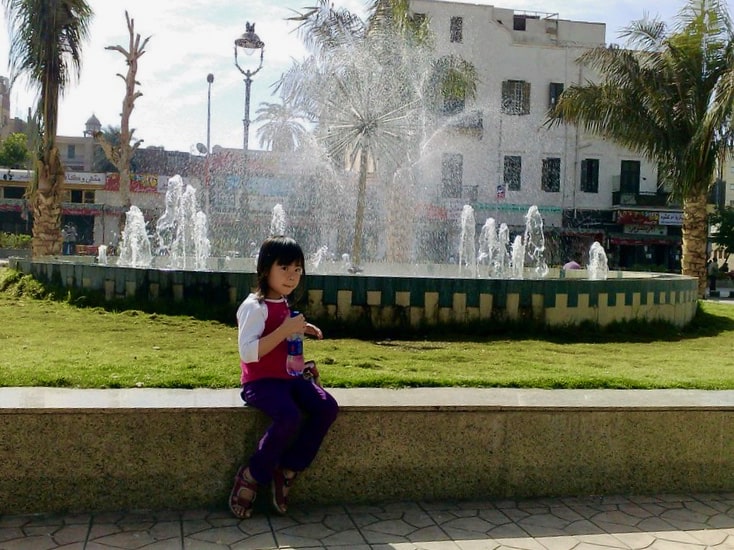 Alex is long gone. I decided to forfeit Abu Simbel this morning; it’s simply too brutal to make Cat get up at 0300 for a long bus ride to see what to her is simply yet another temple. Can’t have temple fatigue setting in yet – there’s still much to see. But Alex loves archaeology and simply couldn’t miss seeing the temple built by Ramses II in honour of his beloved Nefertari.

It wasn’t an easy decision; I would have loved to see that marvellous temple. But I can come back. I would like to sail further – from beyond the Aswan Dam and up to the second cataract, into the Sudan.

It’s 10 o’clock and Cat and I are walking along the corniche in Aswan. It was actually a bit of work, getting her out of bed in time for brekkie. She’s a shocking little sleepyhead that one. Along the way, we’re practically accosted by caleche drivers. Full city tour, maybe? An hour’s ride? Two hours? A three-hour-tour is even better. To the bazaar, perhaps? Or to the Nubian museum?

La! Shukran! A nice, yet forceful way of saying No, thank you. Leave us alone! We want to walk. One even suggested I was abusing my daughter by making her little feet walk! But we’re adamant and resist their intense attempts at selling us a ride. For now.

So we walk – all of a mile – to the nearest playground. A bit grotty but it doesn’t seem to matter. There are slides, a carousel, and various things to climb, so Cat is happy. Then we buy a bottle of water and stroll over to Aswan train station. It certainly looks different from the one depicted in my 1800s book.

Going back to the boat, a caleche driver finally wins us over. He isn’t even pushing. Cat loves the ride. Alex and the Abu Simbel gang are back in time for lunch. What an intense morning they must have had. Up in the middle of the night, hours and hours in a bus, seeing Abu Simbel for what – an hour? – and returning in time for lunch. 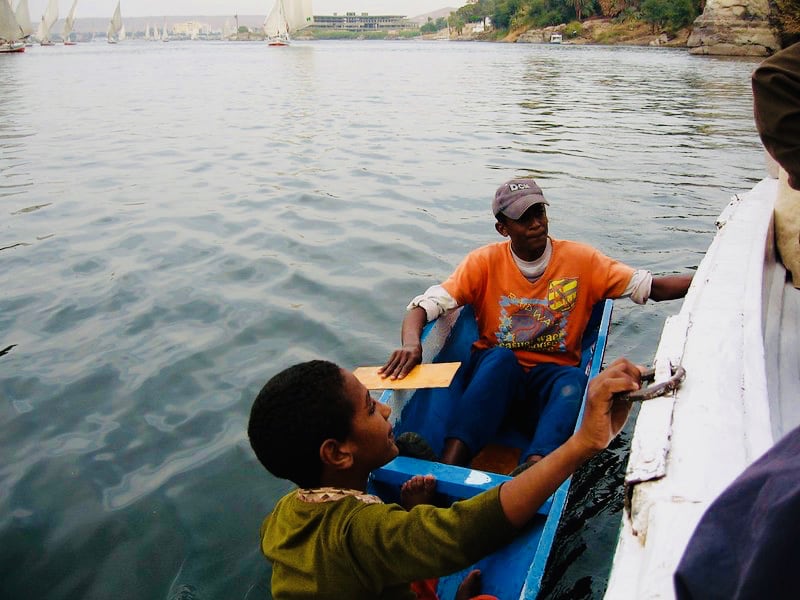 After lunch, we sail in a felucca. Frisk wind in the sails. Perfect temperature. Weather just right. As we sail along, we’re approached by two singing young boys in a shallow boat, paddling with thin wooden planks and their bare hands. It’s horribly off key but I appreciate the irony, intended or not, of their selection: Row, row, row your boat. I’m a bit concerned about those crocs said to be near here occasionally. They wouldn’t last half a second in that rickety thing so I give them a huge tip. Not exactly sure why.

Also, when we dock, the skipper brings out a few odds and ends for sale. A little wooden crocodile for 5 pounds is now ours. Of course.

Time for tea. Over and out.