A few weeks ago, while visiting the concentration camps in Poland and Germany with Cat and 80 of her school mates, we were introduced to Trude Jacobsen, passionate founder of A Drop in the Ocean, a non-profit humanitarian organisation, working with displaced people.*

I was inspired to do my fair share and found out what was needed. A few weeks later, I was on my way to Athens, and then on to Camp Sounio for 9 days. Along with a huge suitcase full of shoes from the head office: always a needed item, I quickly learned.

Camp Sounio is a few kilometres from the Cape Sounion promontory; we’re about 70km/1 hour south of Athens.

Here are my notes from those days:

I arrive in Lavrio late on a Sunday night. Ross, the camp coordinator, picks me up at the bus stop in Lavrio, the nearest town.

The field workers are staying on a caravan site across the street from the refugee camp. My abode for the next 9 days is a funky caravan, which I’ll be sharing with Holly, coordinator-to-be. And sometimes a kitten, affectionately nicknamed Fleabag. 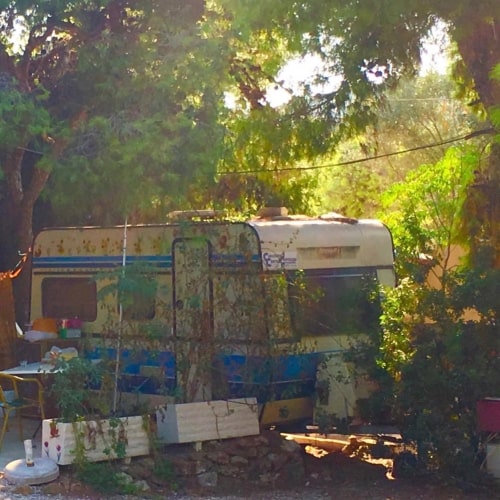 We are 5 volunteers here, from Ireland, Canada, the UK and Norway. In the morning, we meet in front of Ross’ caravan for a briefing before heading across the street to the camp. Today is all about distributing NFI – ‘non-food items’: clothes, shoes, towels, blankets, etc. Off to the white IsoBox warehouse.

In many refugee camps, the displaced live in tents – or metal IsoBoxes-turned-homes (shipping containers, basically). Camp Sounio, on the other hand, is a repurposed children’s summer camp, run by the Greek navy – with cabins. 300 people live here, about half of them children.

At night, there is music and dancing in the camp square. 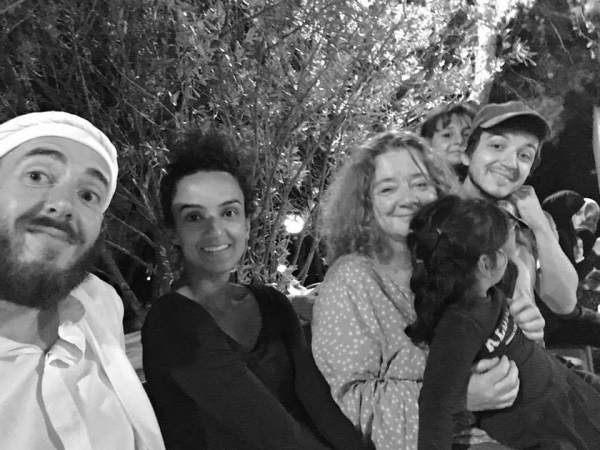 We have a system for distributing clothes here. Each family is given a time slot, say 10.00 – 10.30, to find what they need. In my more cynical moments, I sometimes think life can be so frustratingly repetitive. Well, sorting and distributing is just a whole new level of Sisyphean. Sorting, folding… everyone messing everything about… sorting, folding… Round and round it goes. So much clothes. A never-ending flea market!

Most show up at their allotted time, more or less. But some appear a few hours late, or even a day late. I’m reminded I am so very Norwegian about order and punctuality, understanding cultural differences becomes merely theoretical. And when their only excuse for showing up 2 hours late is that they were sleeping, I think: Sleeping!? It’s 10am, dammit. Not 7!

But then I think of what it must be like for them, and I tell myself very strictly to get it together. A friend advises that I pace myself, else it will drain my energy. He’s right. It is draining. Thinking about having to live here, doing mostly nothing but wait. Not knowing when you can get on with your life. Like a holding pattern in the twilight zone. Must be so easy to become apathetic. 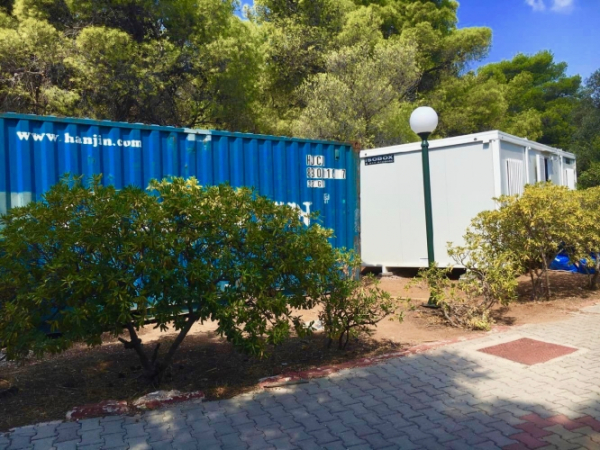 We have found a more efficient distribution method. Instead of inviting everyone down to the IsoBox to browse, we do rounds, knocking on doors and asking everyone what they need. Then we find the right items and deliver to their cabins. So far, it’s working well.

For a change of pace from the IsoBox, I’m mediating a bit today, which essentially means breaking up fights between the teens. Better use of my skills.

No wonder they fight. Seriously under-stimulated kids. At other times they get excited about a balloon. Or a pair of used football shoes. Compared to the 80 fourteen-year-olds I spent a week with in Poland and Germany, just a few weeks ago, this feels like a different world. 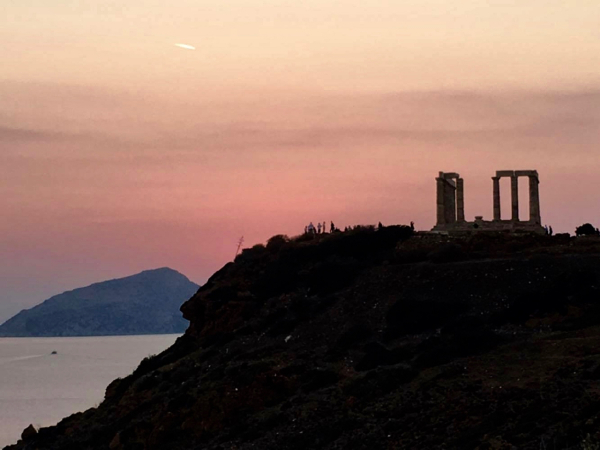 After work, we take the evening off. We drive down to Cape Sounion to see the Temple of Poseidon at sunset. Then we have dinner together in Lavrio. Nice and relaxing.

I’ve been teaching conversational English for the last couple of days – as a group in a classroom, and one-on-one with those who want to.

Some are eager to talk about their current or recent situation. I’ve heard stories of the dreaded crossing from Turkey in little dinghies, filled to the brim. About having to stand up in the boat during heavy waves, pregnant and seasick and pure luck keeping you from falling overboard.

Many seem to want to go to the Netherlands. The dream destination?

No! No, it is not the dream destination.

Greece is like Syria, I hear. It is beautiful and chaotic and things are usually broken. Like Syria. Only without war. Syria without war is the dream destination. Home!

I feel like I have been here forever. I’ve had more tea in strangers’ houses in one week than ever before. Life in the camp can seem almost aggressively normal. But it’s not, of course. It’s nowhere near normal. It’s in limbo. Causing depression and despair. There are people about to lose hope of a normal life. Children who have never been to school. A lost generation.

This evening, I stopped by the cabins to say goodbye. 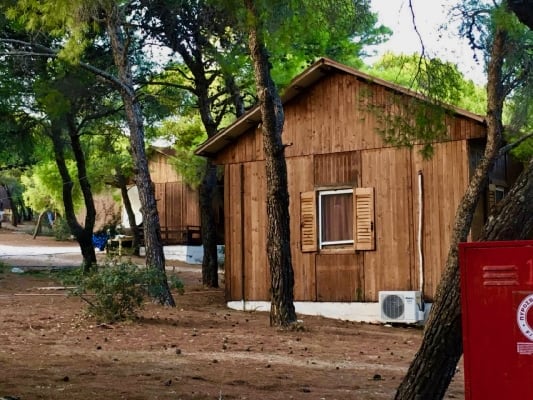 I’ve heard so many stories the last few days. So many destinies! Here are a few:

M is a 16-year-old Afghani. Her family is one of few here that are not Syrian. She is in my conversational English class. And every other English class. She’s learning Spanish and Greek, as well.

She wants to be a heart surgeon, and has a worn anatomy book, which she is memorising.  I remember some of the mnemonics from my own anatomy class, a million years ago, and tell her. Some are a bit rude, involving, well, anatomy. We laugh. A lot.

M is here with her mother, sister and brothers. Her father was killed by the police. She talks about the Taliban, about which type of death penalty you’ll get for which wrongdoing, all quite casually. It seems almost surreal.

Others chime in with their experience from Syria. They all wait for interviews, to see if a European country will take them. Though M wants to go the USA. I hope her wish comes true. I think she will be an amazing heart surgeon.

L is 21. She crossed from Turkey in a rubber boat. She is not ready to talk about it other than saying it was a nightmare she wants to forget. She is lovely and kind and it’s impossible to stop by her cabin without being offered tea and food. Today was pita bread with chips.

Like most of the ones I’ve spoken with here, she is highly educated. Back home in Aleppo, she was at university, studying economics. She would like to finish her degree, then work with refugees from Africa, the poorest of the poor.

Her toddler is a bit of a handful and doesn’t give her much rest. She could use some uninterrupted sleep, as she is expecting a baby in a few months. L might have been my daughter!

F is 12. Her mum is away in hospital in Athens to have a baby. She speaks English very well and frequently helps us translate. She’s cheeky and adorable at times, at other times she’s a little terror. She makes my day, that crazy girl.

Today, I’m saying goodbye to my caravan home. It’s the kind of place where it’s not even possible to lock the door and we leave the car keys in the ignition. And yet, over these days, it has grown on me. 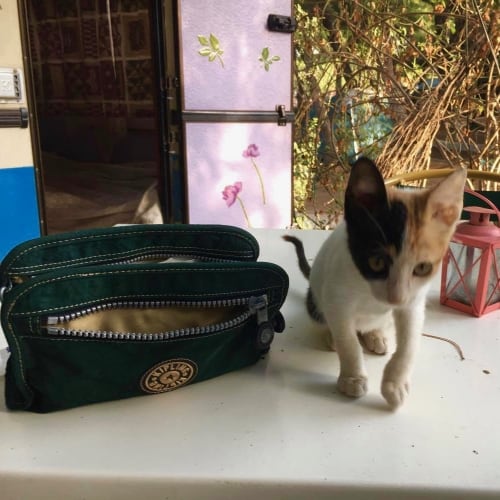 I’m leaving with so many thoughts. And equally many mozzie-bites. At least I think they are mozzie-bites. But they could be from Fleabag. She managed to sneak into the caravan and she slept on top of me all night. My purring alarm clock.

It seems fitting to end with a quote from fellow writer Leigh Shulman:

…your entire worldview changes when you’re forced from your home, when you have no choice, when you watch people die up close and when you hear rumours of people dying, people you knew, people you loved, all gone.

More than ever, I realise I have won at life’s lottery. I was born in Norway, in peaceful times. I could have been born in Syria. This could be me, my family, my children. There but for the grace of God. It feels unfair.

I am going home. They are waiting. Waiting indefinitely. To hear which country will take them. Wondering if they will ever return home. To Syria without war.

*A Drop in the Ocean is a Norwegian organisation, but has volunteers from around the world. More info here about how to get involved – from donating money to working in the field.