I have a few favourite places around the world. Or maybe not so few. But they include this little village just 12 minutes by ferry from downtown Auckland, where we lived when Cat was a baby, back in 2003. And this other little village in Cornwall, that I will write about soon. And home in Norway, there are almost too many idyllic spots to mention. And then there’s Fjällbacka.

I’ll tell you more about Fjällbacka in a minute, but first a little digression:

Cross-border trade flourishes in these parts. Norwegians travel to Sweden because prices are low. This is known as harryhandel – harry shopping. Strangely, the name Harry is used as a somewhat snooty term in Norwegian, meaning something or someone unsophisticated/naff. Though sometimes, something is so harry it’s cool.

Swedes shop in Denmark for the same reason. Danes, in turn, go south to Germany. Germans go east to Poland, while Poles, as far as I’ve been told, go even further east. And this is how the world of international business turns. Up in the very north, Russians pop across the border to Norway, to buy cheap nappies (diapers) for babies. Full circle.

Oslovians and people from points south-east, cross the border bridge over Svinesund Sound. Most only go as far as the mega shopping centre just across the border. Used to be, they would continue to Strömstad, another seaside gem. But after Systembolaget, the state-run bottle shop, opened a big branch by the border, Strömstad is left in peace from rowdy Norwegians looking for inexpensive alco. 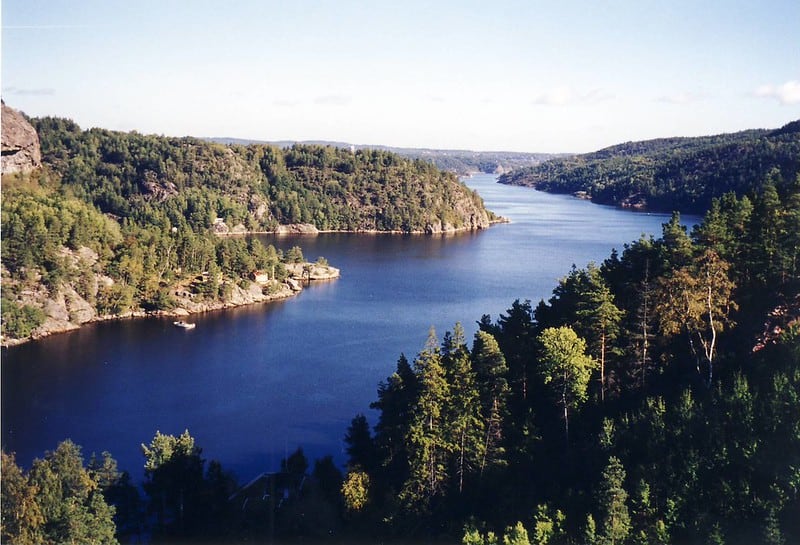 But you and I, we’re not satisfied with just cheap booze, are we? That’s not to say we won’t stop at Systembolaget on the way home. But first and foremost, we’re here to experience! So let’s make it a little road trip:

If you’re not often in these parts of the world, and want to see all three Scandinavian countries in one go, you might travel from Norway to Denmark, via Sweden. Oslo – Gothenburg – Copenhagen will take about 7 hours if you drive straight through. Which we have done many times, for expediency, to set up Ali in her student digs at Copenhagen University, or simply for a weekend of fun in the Danish capital.

Venturing past Strömstad, along the coast of Western Sweden, you’ll pass one interesting spot after another. Just 32 km south is UNESCO-listed pre-historic rock art at Tanumshede. A further 17 km along is Fjällbacka.

It’s as stunning as the rest of the villages dotting the coastline: charming wooden cabins and fishing sheds, the bright blue waters of Skagerrak Strait, and cosy cafes where you can stop for fika.

A word on the brilliant Swedish tradition that is fika: You may have heard of it, maybe you’ve even been invited for fika with a Swedish friend or colleague? Have you perhaps thought it’s merely a coffee break? Well, there’s always coffee, and there’s always fikabrod, a pastry or piece of cake. But fika is a ritual, a state of mind. An integral part of Swedish culture. You’re never too busy for fika.

You always fika with someone. A coffee break at your desk is NOT fika, that’s just a coffee break. Fika is institutionalised socialising. Companies have fika breaks; it’s considered healthy for the work environment. In fact, it’s often mandatory to stop work for fika.

The name? Simply kaffi (coffee) with the letters inverted. Kaf/fi – fi/ka. There’s a whole quirky history behind it, involving a paranoid 18th century king, coffee prohibition, secret coffee meet-ups, and twin brothers who traded their death row sentence for a lifetime of coffee. More on the history of fika here.

A few years ago, one of those red fishing sheds was sold for more than 1 mill USD. All 25 square metres of it!

A mountain and a canyon in the middle of the village

How does Fjällbacka differ from the other villages along the Skagerrak coast? You may have guessed from the photo on top here.

The closest translation of the name Fjällbacka I can think of, is mountain slope. Which sounds a bit ambitious (I’m from Norway after all, we have real mountains). But let’s go with it. Because smack in the middle of Fjällbacka is Vetteberget. A vette is a small but naughty, mythical creature in Nordic folklore – and berg means mountain.

Vetteberget is only 74 metres high, so a rocky little hill would probably be the most appropriate term. We’ll say a miniature mountain, and a cool one at that. Including an intriguing little canyon.

Have you seen Ronja Rövardotter (Ronia, the Robbers’ Daughter), based on the delightful stories from our favourite author of children’s books, Astrid Lindgren? Or, if you’re into Nordic Noir, you may have seen the films based on local author Camilla Läckberg’s thrillers, about writer/amateur sleuth Erica Falck. Both are set in Fjällbacka, and you will recognise Kungsklyftan, the King’s Canyon.

Kungsklyftan is 200 metres long, and takes about 10 minutes to go through. 10 rocky minutes.

The path under the three boulders here is the least rocky part.

Still not the rockiest part… 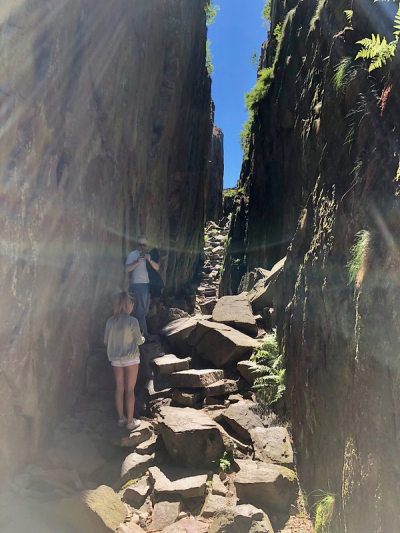 You’ll want to leave those Manolo Blahniks at home.

At one end of the canyon, are stairs up to Vetteberget – 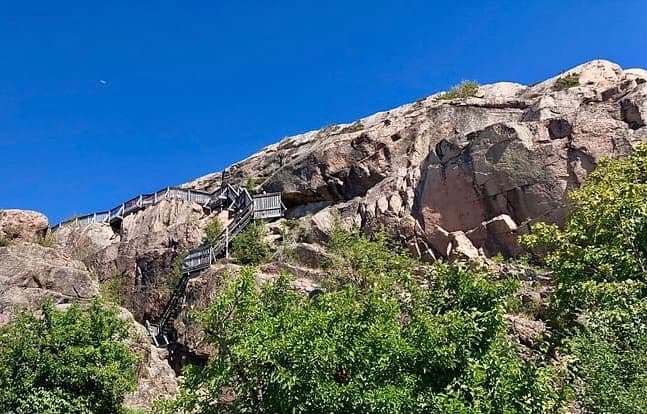 – well worth the tiny climb for this panorama…

… and at a slight turn of the head is this view…

On Dannholmen, one of the little islets out there, Ingrid Bergman had a summer cabin, just a few minutes away by boat. She came here for 20 years and loved it, so much her ashes were spread amongst the skerries here. As a thanks, the main square in town is named Ingrid Bergman’s Torg.

On lovely summer days, the number of people wandering the streets of Fjällbacka well exceeds 829. Like us, they drive in from across the border – or come all the way from Stockholm. The little village attracts rich Stockholmers wanting a sommarställe (a ‘summer place’, or a cabin, as we call it in Norway).

There are quite a few unique little boutiques, so we always seem to come home with more things we don’t actually need (but which we really like, so we quickly forgive ourselves).

Since Fjällbacka is only 2 hours from home, it feels a bit odd to spend the night. But during a UNESCO-spotting road trip in Sweden a few years ago, I decided to reward myself with a night here. And not just anywhere, but at Stora Hotellet (The Big Hotel – how can you not dig that name).

Fjällbacka used to be a fishing village. Not so much anymore. Also, the Skagerrak Strait is one of the busiest shipping routes in the world. Though, at the height of summer, it’s mostly full of Norwegian pleasure boats cruising down the Swedish coast.

At night, while I’m sitting at The Big Hotel’s outdoor restaurant, Bryggan, some of those yachters are embarrassingly loud and tipsily throw money around. Kinda hoping it’s a one-off, but fear it might not be… I don’t really want to be associated with these twits.

Best then, to get on with my plan: going through Kungsklyftan at midnight. I’m inspired by a scene in an episode of Fjällbackamorden (The Fjällbacka Murders), where Erica Falck hurries through the canyon, pursued by someone with evil intentions.

Luckily, the moon is full, providing enough light so I don’t need a torch, and helps me avoid yet another twisted ankle. On the flip side, la bella luna gives off a rather cold, ghostly light in the already spooky gorge, with those huge boulders hanging precariously overhead. The rocks haven’t moved an inch in 12 000 years, but who knows, perhaps tonight is the night…

As you can tell, I made it through in one piece, no rocks tumbling onto my head, no landslides, and most importantly, no mad axe murderers. But to be frank, I was relieved to crawl under the covers at my maritime-themed room at… The Big Hotel.

Bryggan in paint, without noisy Norwegians (one hopes)

A rare winter visit, stopping for fika at… The Big Hotel

My kids adore Fjällbacka; for a while we even toyed with the idea of getting a little summer place here. But my owning phobia (i.e. too much responsibility) – teamed with the crazy price level, we’ll scrap that idea. For now, at least.

Instead, we visit. Again and again. Cat always wants to spend her July birthday here. Her 19th last summer, was a no-go unfortunately. Corona-closed borders. But I’m optimistic for 2021. 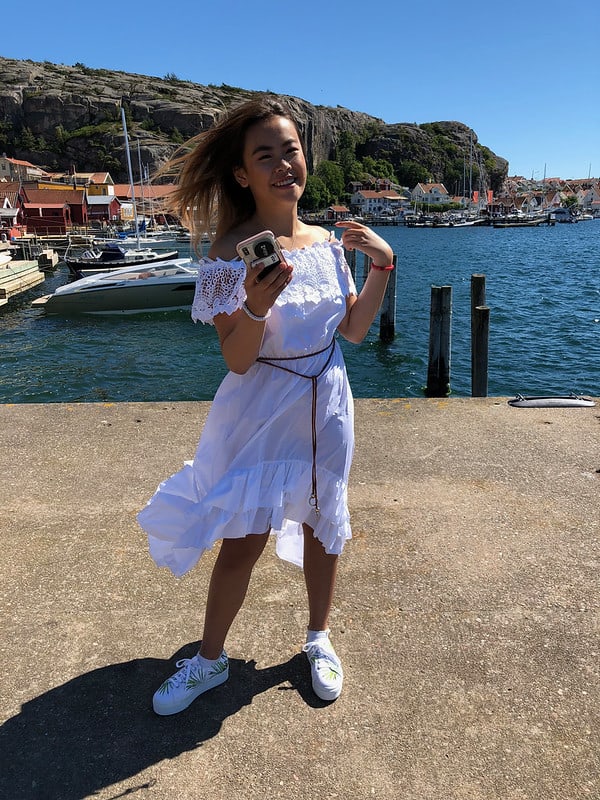 The Instagrams in this post are from different visits over several years. Must have had a weird fondness for over-editing photos this particular year.

That view from Vetteberget again, from a slightly different angle…

I’m intrigued by this building, so you get a twofer here. 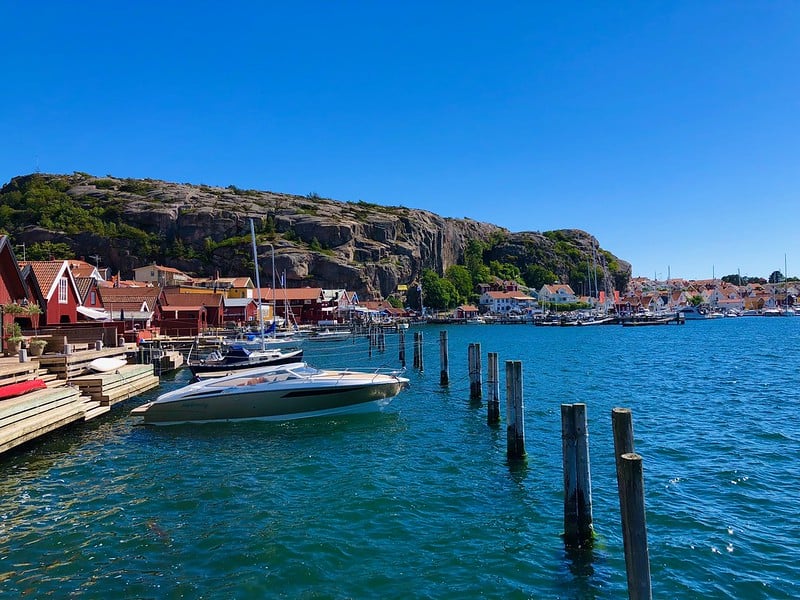