The mysteriously named Forbidden City is a massive palace complex – and I do mean massive – in the centre of Beijing. But the first impression – from this end, at least – doesn’t give away anything about the sheer size of it. 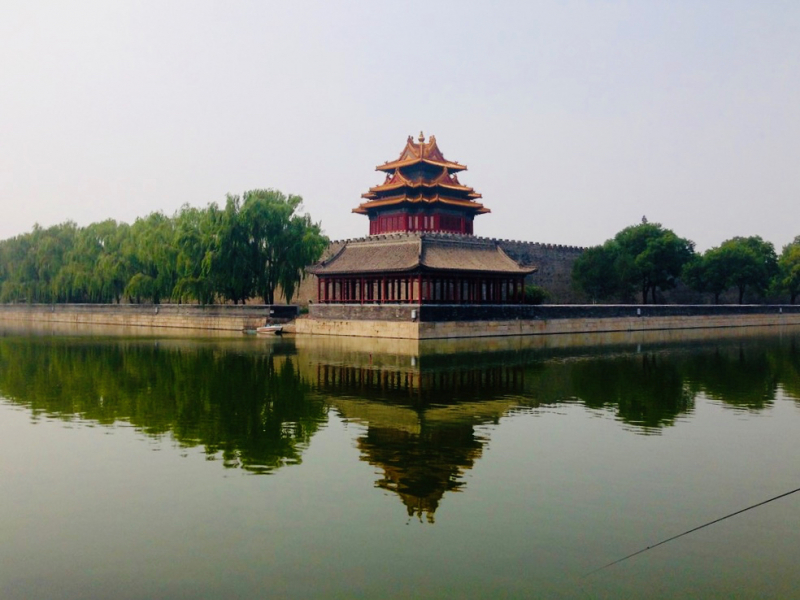 A corner tower in the Forbidden City, reflected in the moat

Forbidden City! Sounds curious, doesn’t it? We’ll get to the why in just a minute. But first, a little backstory.

Back in 1421, emperors of the Ming dynasty decided to move their capital from Nanjing. They made Beijing their Imperial City and set up house here. That house was the grand palace complex known as the Forbidden City.

This wasn’t going to be home for a mere human, but for Tianzi. Son of Heaven. Ruler by mandate from above. Expected to comply with heavenly virtues. 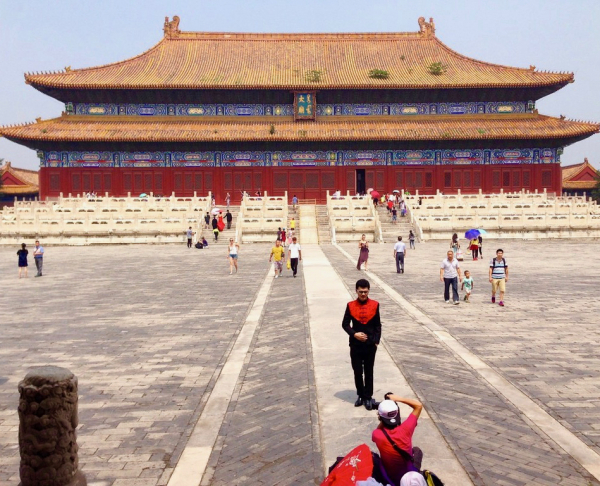 Once, a worthy home for the Son of Heaven. Now, a fab backdrop for a photo shoot. 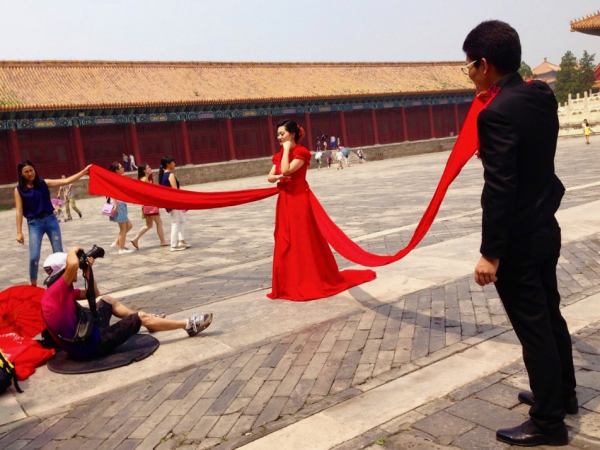 This was the seat of absolute power for half a millennium – first for Ming emperors, later for their Qing counterparts. 14 Mings and 10 Qings. Then it all came to an abrupt halt in 1911. If you’ve read the book (or seen the film) The Last Emperor, you’ll remember young Puyi, who became the last Qing emperor at the ripe old age of 2, and was forced to abdicate four years later in the Xinhai Revolution, when the Republic of China was established. That’s some childhood. 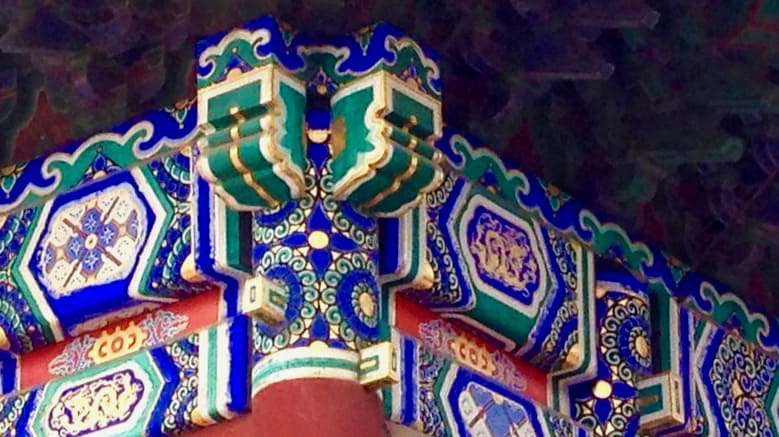 Forbidden City – what a name! One might think those emperors didn’t want any riffraff milling about their imperial palace. Best not to let common folk get any ideas about the rulers being inclusive and stuff, so let the name reflect that. Just so there’s no doubt it’s off limits to the plebs at large.

Well, that’s one theory. Another is that it is simply a mistranslation. The Chinese name is Zijin Cheng:

The North Star Home of the Heavenly Emperor City. Bit of a mouthful that. Let’s just stick to the Forbidden City, shall we? 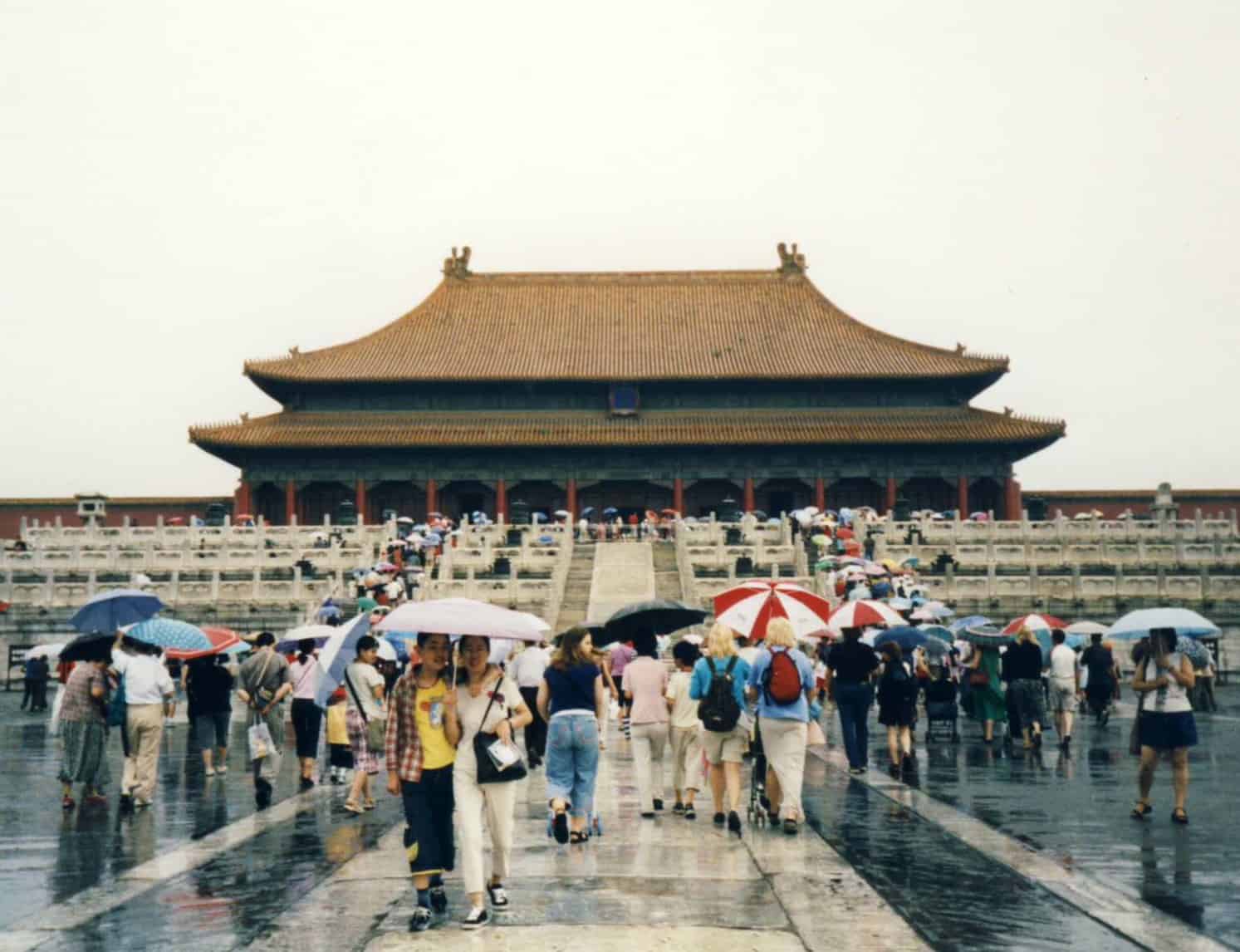 Back in the present, locals, tourists, and everyone and their dog hang about here. 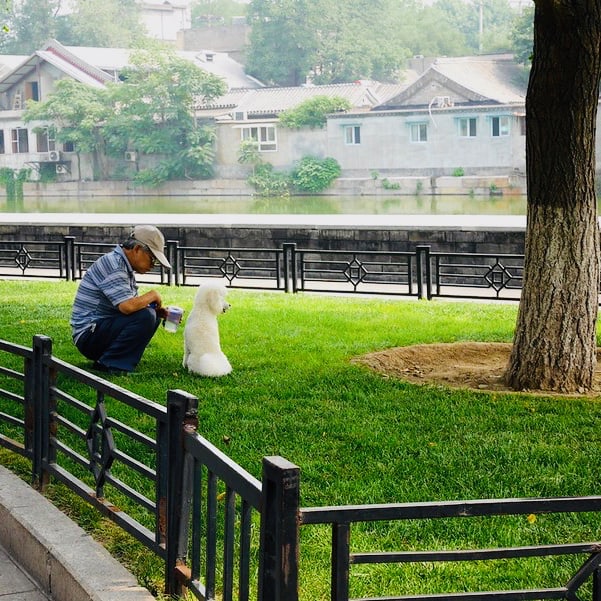 This man made me smile: sharing water with his dog in the Forbidden City.

Did I say the complex is massive? No less than 980 temples, pavilions and ceremonial halls. Rumour has it, there are 9,999 rooms. And while that is a nice number, exciting almost, it is most likely an urban legend. 8,886 is the right one. Massive, any which way you look at it! According to UNESCO, the Forbidden City is the largest collection of preserved ancient wooden structures in the world.

Ca 14 million visitors stop by each year. On a couple of occasions through the years, one of those 14 million has been yours truly, with or without kids. 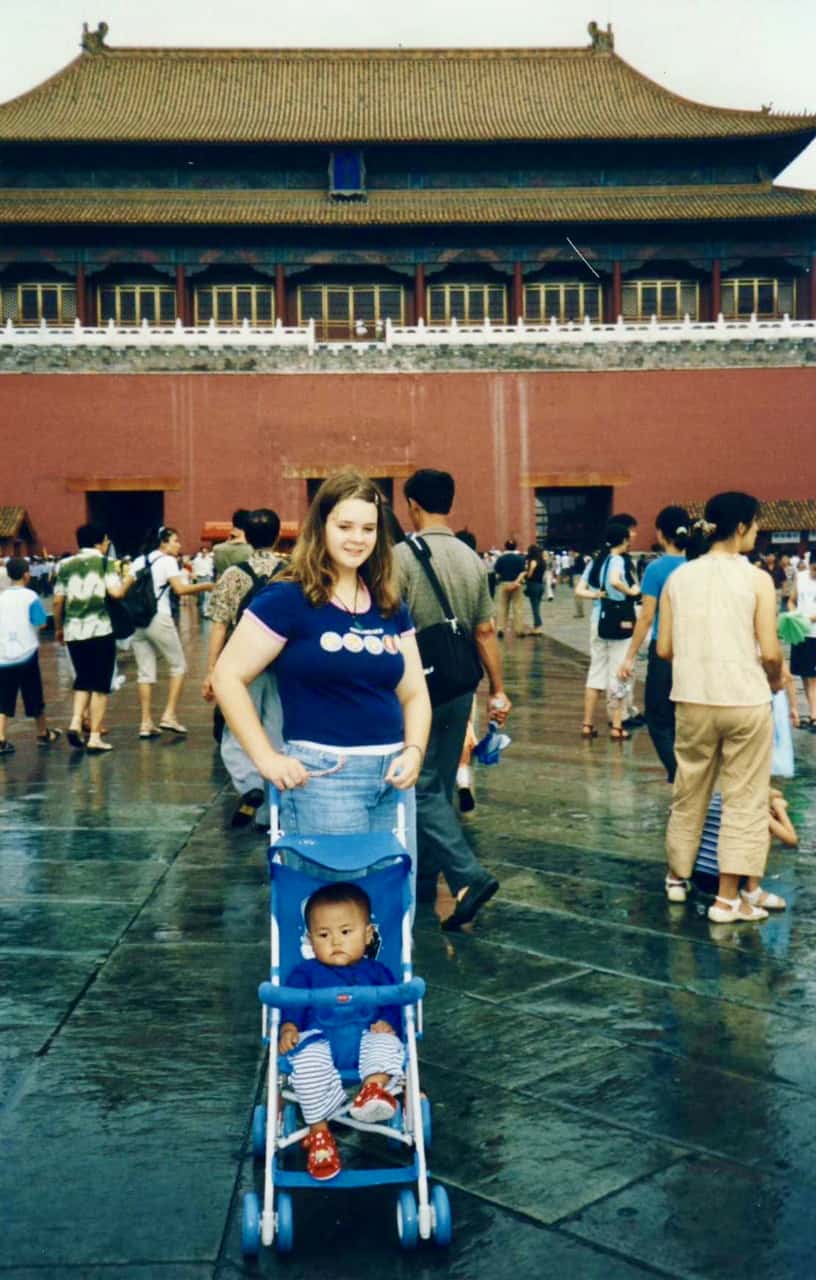 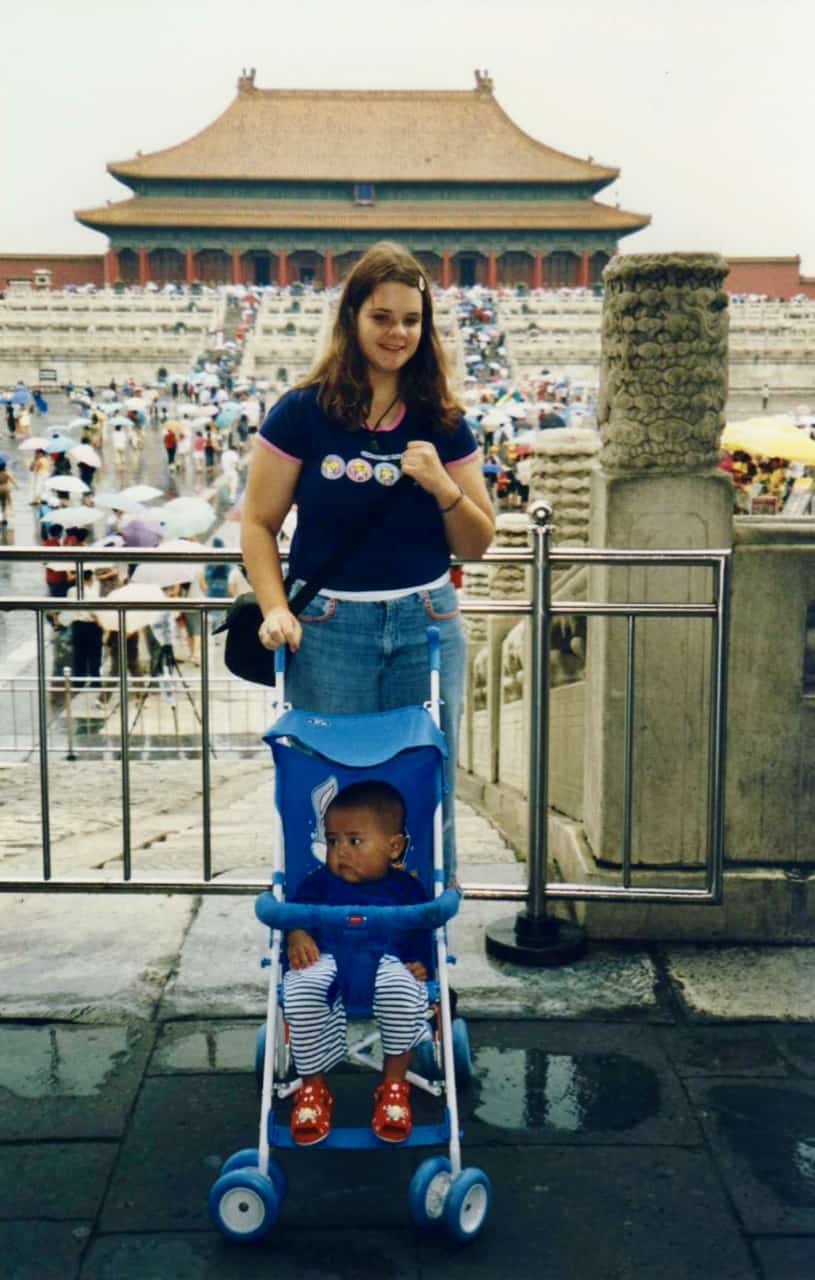 Posting two of these two, from 2002, cause I love both photos. Little did she know then, that little one, that she would grow up in a completely different country, on the other side of the world.

Good thing it is huge, considering the crowds. Though on a scorching hot August day in 2015 (below), it was only moderately crowded. Can you imagine it all empty? It would look almost ghostly. 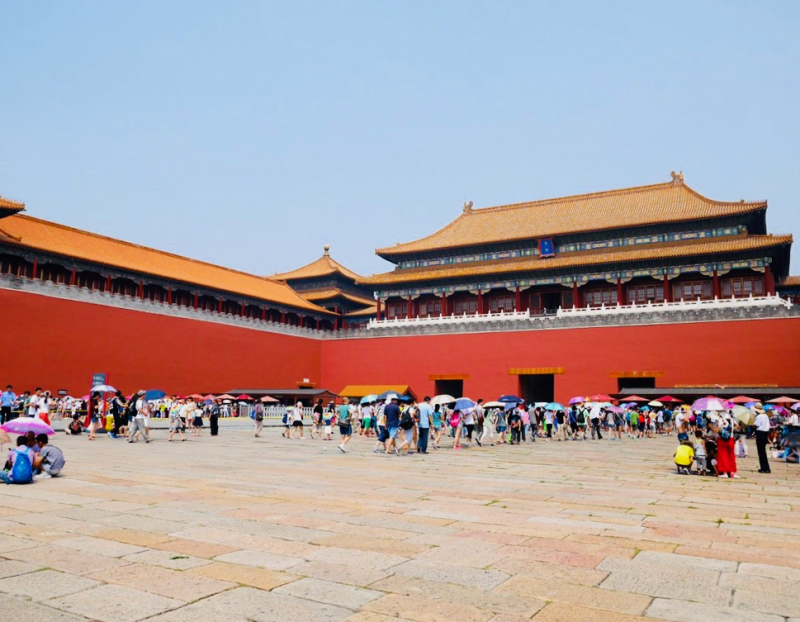 The Forbidden City is constructed in a grid-like pattern, very precise – said to reflect the strong hierarchies in ancient Chinese society. Main street in the complex is a north – south axis. That’s where you’ll find the main palaces. That’s also where the crowds are.

But – just veer a few metres to the left or the right, down one of the many little alleys and passages, into the courtyards, through the gardens, past shrines, across one of the beautifully carved bridges – and it feels like you have the place to yourself. 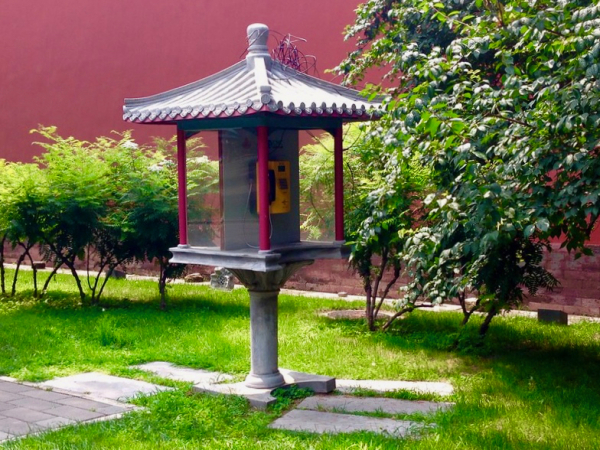 I would plan at least 3 – 4 hours to explore the complex properly. There are plenty of details to discover. And notice the delightful names of the buildings: here’s the Archery Pavilion and the Yellow Crane Pavilion, there’s the Palace of Accumulated Purity and the Palace of Tranquil Longevity with its Nine Dragons Screen. Over there is the Gate of Divine Might – and let’s not forget the East Glorious Gate and the West Glorious Gate. 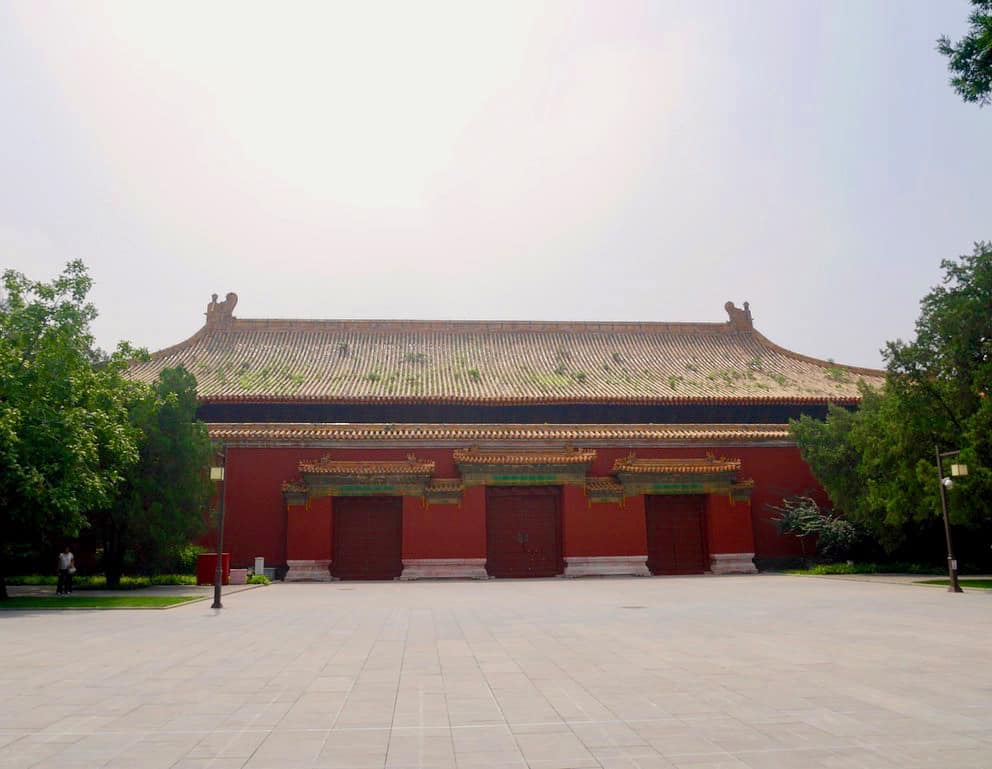 Quiet once you get away from the main drag 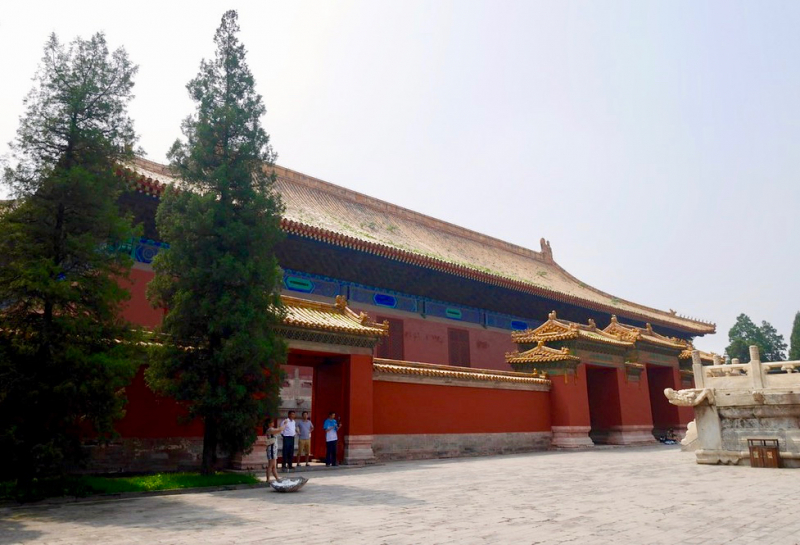 The main buildings of the imperial complex face Tiananmen Square, named after Tiananmen Gate. Tiananmen means the receiving the mandate from heaven, and pacifying the dynasty-gate. Another tongue twister there. Fortunately, the more commonly used name is easier – and also more poetic, I think: Gate of Heavenly Peace. 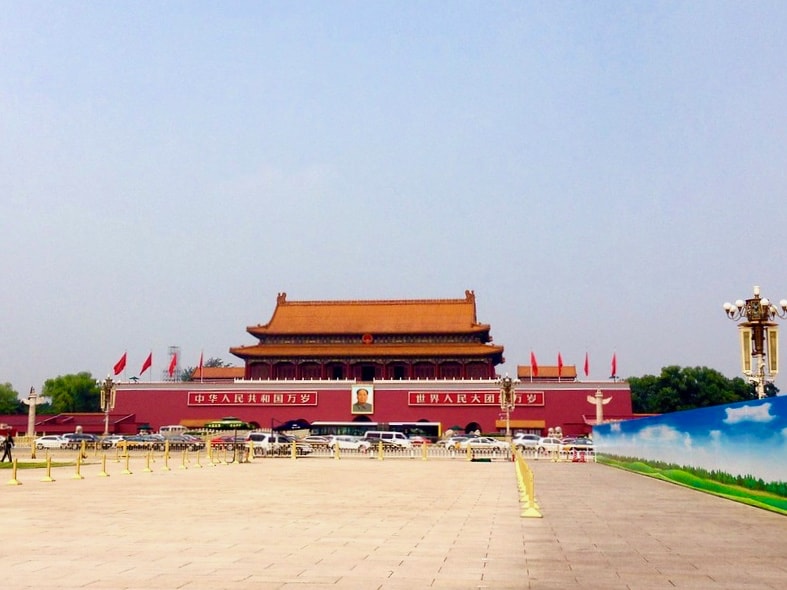 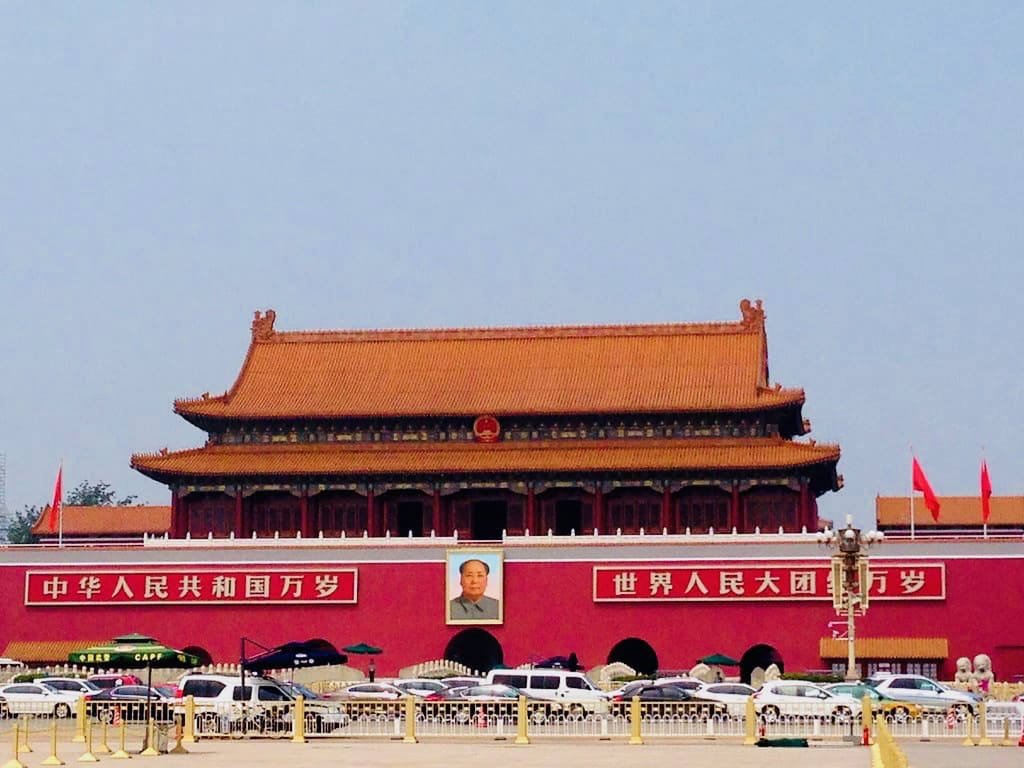 We can’t talk about the Forbidden City without mentioning Tiananmen Square. You will remember this large public square as the scene of the student protests that ended so tragically in 1989. The square has been used for mass gatherings since its beginning, in 1651. Today, there is room for 600,000 people here.

On the eastern side of Tiananmen Square is the National Museum of China, an art museum second only to the Louvre in visitor numbers. 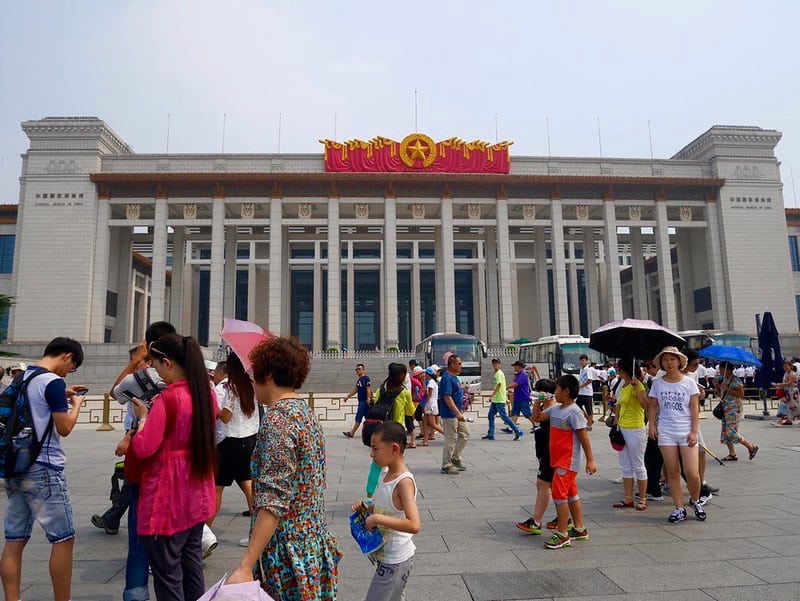 Fun fact: The museum facade displays countdown clocks for important occasions, such as the transfer of Hong Kong in 1997 and of Macau in 1999 – and the Beijing Olympics in 2008.

On the western side of the square is the Great Hall of the People, the political heart of China. It functions as a ceremonial building for the government and it is where the national congress of the communist party takes place every 5 years. The building and the main auditorium is open to the public when it is not being used. 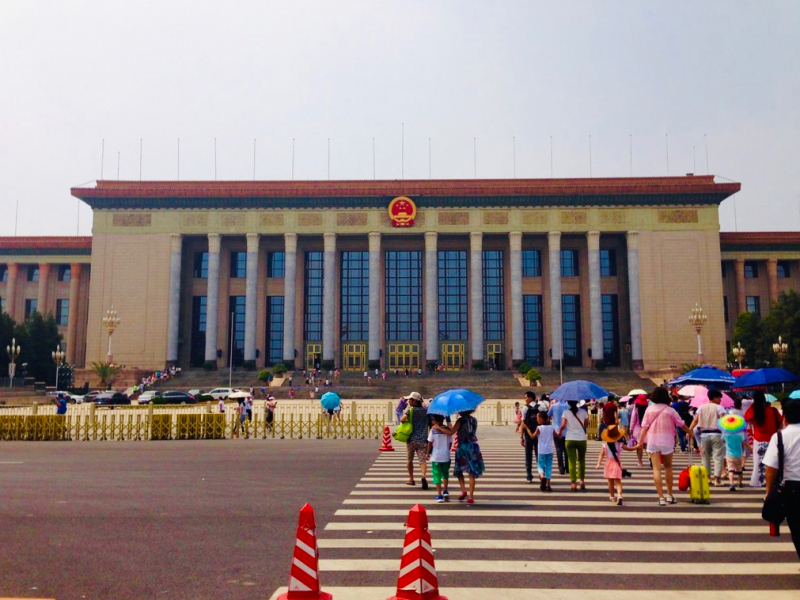 Great Hall of the People

At the southern end is this 38-metre-high obelisk, erected in memory of political martyrs of the last two centuries – from the First Opium War in 1839, to the Chinese Civil War in 1949, and all the wars and uprisings in between. Another massive one, it covers nearly 3,000 m2! And you had better behave at this important monument, or else. Here are the rules that apply.

Nearby is the Chairman Mao Memorial Hall, better known as Mao Zedong’s Mausoleum, where you can see the great leader on his eternal lit de parade. Against his will, it appears; he had wanted to be cremated. The mausoleum is open to the public every day except Mondays.

Eternal glory to the people’s heroes