G’day folks! It’s 1 September, first Sunday of autumn. Time for a local focus, I thought. If Oslo is on your radar this colourful season, here’s a piece I wrote for Thai Airways’ inflight magazine a while ago, updated today, just for you. Enjoy! 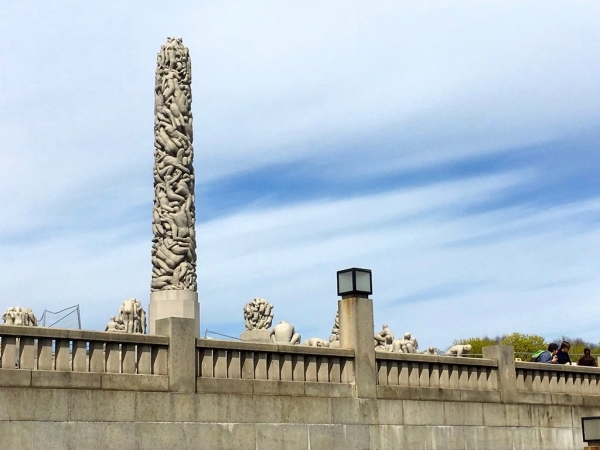 It’s Sunday morning and I’m at Frognerseteren, a cherished Oslo landmark. The iconic restaurant is starting point for many a Sunday hike, a favourite local pastime. Ut på tur, aldri sur is the mantra, loosely translated as ‘if you hike, you’re never in a bad mood’. One might wonder how people can be so fervent about the outdoors so close to the chilly Arctic. Another local rhyme might explain: det finnes ikke dårlig vær, bare dårlige klær, meaning ‘there’s no such thing as bad weather, only bad clothes’. These two statements aptly sum up the Norwegian attitude to the outdoors.

After a long, hearty hike (or a short stroll if you prefer), Frognerseteren awaits with coffee and waffles, another local favourite, usually served with sour cream and strawberry jam, or with geitost, a brown, sweet goat cheese. 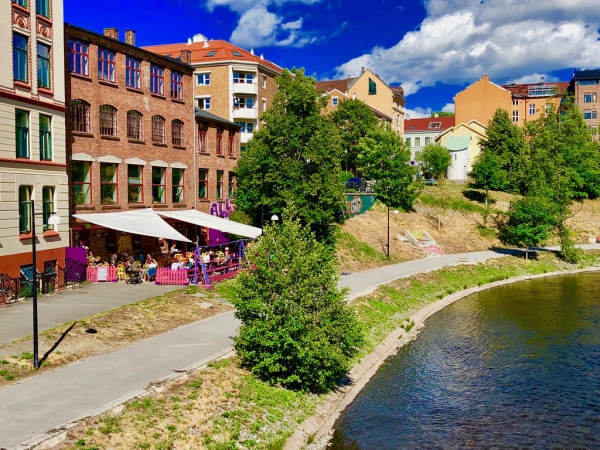 In Oslo, nature is never more than 15 minutes away by public transport and locals take advantage of this proximity at every opportunity. On one side of the city is the Oslo fjord. On all others, you’ll find the vast expanse of forest, hills, lakes and rivers that is marka. Marka means woodland, but it’s much more than that. It’s an attitude, an integral part of the city’s psyche. Many Norwegians feel they won life’s birth lottery and the easy accessibility of nature plays a big part in that sentiment.

After working-hours and on weekends, the trails of marka is always full of people. Come winter, Oslovians can’t wait to strap on skis. Cross-country skiing is the national sport, and everyone participates: from newborn babies pulled behind their parents in pulk-sledges, to healthy 85-year-olds, and everyone in between – they’re all out. At night, the trails are lit, so any time of day you’ll find company. No worries about feeling crowded, though. The trails network is huge. 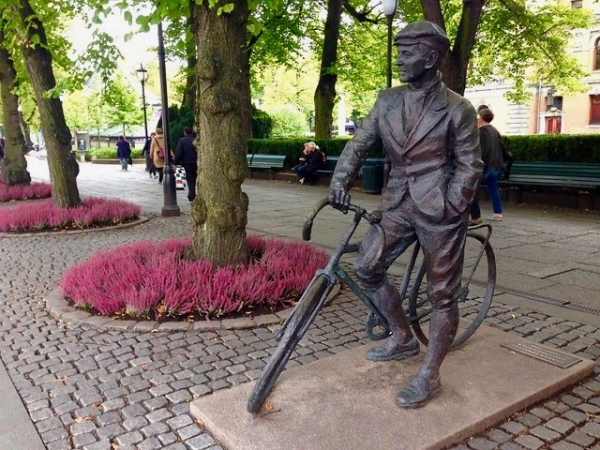 All other times of year, generations of bicyclists and hikers take to the trails. Now in September, marka is especially beautiful decked out in the deep, sunny colours of its autumn foliage.

Autumn is also hunting season, and game features heavily on the menus of the city’s restaurants. Grouse, ptarmigan, reindeer and moose are staples this time of year – along with lamb served in a variety of ways. Fårikål (lamb and cabbage) is typical autumn fare and most homes will have a large pot stewing at least once during the season.

Sea food is easily available as well. Most homes have fish on the menu three times a week and restaurants serve wild salmon, brook trout, cod from the Lofoten Islands and much more. If you’re adventurous, you might even try whale.

Fishermen are out early along the fjord, as are prawn trawlers. Prawns are often bought right from the boat, then served on a huge tray accompanied with a hard-crusted white bread called loff, butter, mayonnaise and lemon. Whether you’re invited to someone’s home or on their boat, or you’re in a restaurant, everyone peels their own prawns. It takes a bit of practice to get the hang of it, but once you do, that’s half the fun. Sitting at the table at a traditional prawn evening takes forever, chatting, laughing, peeling and eating. White wine is the preferred drink. 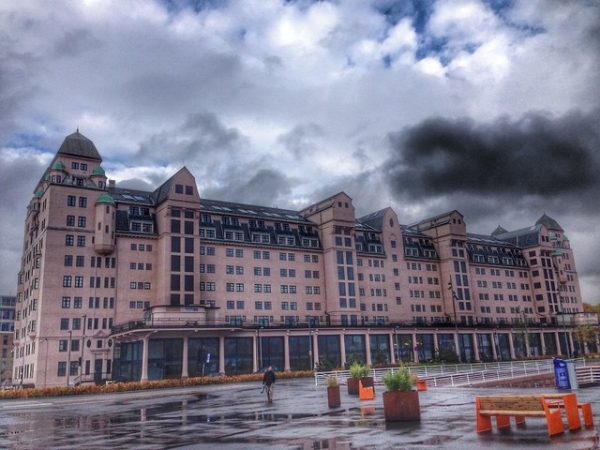 If they’re not in the forest, Oslovians are out on the water. I hop on the old wooden sail boat plying the fjord, imagining I’m a Viking coming home after months or even years at sea. The skyline might be new, but the surrounding hills and forests haven’t changed much in the 1000 years since the city was founded.

Norway was once a maritime super-power, and in fact, still controls one of the world’s largest merchant fleets. For a closer look at the country’s sea-faring past, I hop off the ship at the Bygdøy Peninsula. Starting out in the 9th century, I admire the exceptionally well-preserved Oseberg and Gokstad ships at the Viking Ship Museum. A quick time travel then takes me to 1911. That’s when explorer Roald Amundsen was the first to reach the South Pole. I stroll around the deck of Fram, the boat he used for his expedition, picturing life on a polar vessel a hundred years ago. Across the street, another time warp brings me to 1947 and the Kon-Tiki, the flimsy raft used by equally intrepid explorer Thor Heyerdahl to cross the Pacific Ocean. Later, he would cross the Atlantic in the reed boat Ra, also on display here. Heyerdahl’s mission was to show ancient man could have crossed the world’s great oceans with their simple vessels. 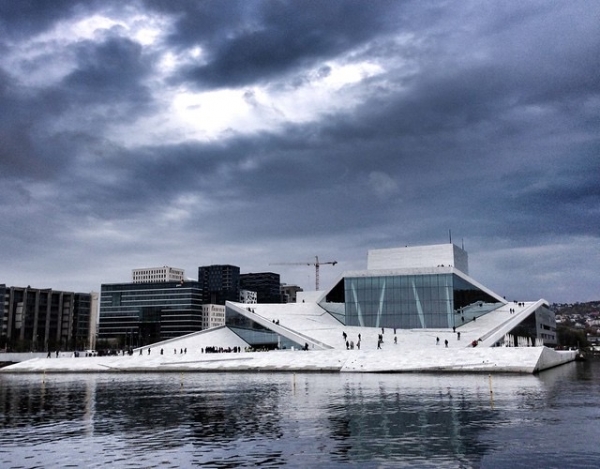 I take the boat back to the city centre, disembarking at the striking Oslo Opera House. Designed by the famous architects at Snøhetta, it resembles an ice floe receding into the fjord. It’s an interactive work of art, and symptomatic of Norway’s social democratic values. Although it’s an opera house, there’s nothing high-brow about this building. It clearly belongs to the people and every day you’ll see lots of them taking a walk on the steep roof.

Further into the centre, nature meets culture at Frogner Park. Locals skate, walk their dog, have picnics or sunbathe in Frogner Park, surrounded by 212 life-size bronze and granite nudes by sculptor Gustav Vigeland.  Children adore climbing on the statues, or imitating the much-loved Sinnataggen, the Angry Little Boy. The tall Monolith is visible from anywhere in the park, comprising 121 nudes reaching towards the sky.

As evening descends, I stroll down towards the renovated ship yard Aker Brygge and a well-deserved sea food dinner with fjord views.

For such a small population, Norway has a surprising number of world class chefs. Of the 13 winners of the prestigious Bocuse d’Or, the world’s chef championship, no less than four have been from Norway.

Bent Stiansen is one of them. He owns the famous Michelin-starred restaurant Statholdergaarden in the city centre housed in a building from 1640. Stiansen wants his restaurant to be an extension of his private dining-room and uses local, seasonal products for his creative, delicious menus. The Cleopatra Room is the grandest in the house, with a fabulous plasterwork ceiling depicting Cleopatra’s dramatic death. Smaller parties can eat in what was once the bedroom and the bathroom of Tordenskjold, a 17th century admiral and national hero. www.statholdergaarden.no 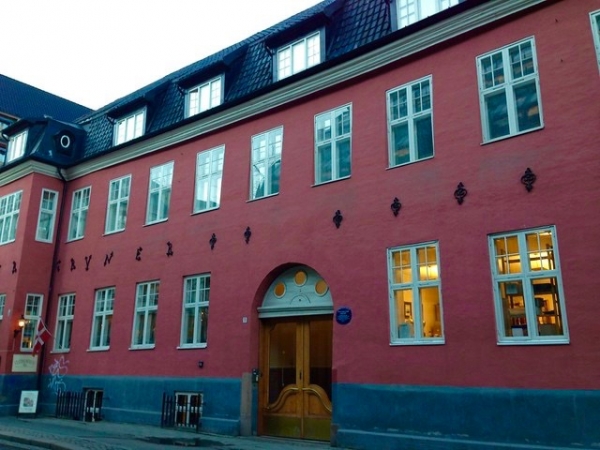 Also in the city centre, Theatercafeen has been one of the most popular restaurants in town for the last 111 years. and features on New York Times’ list of the 10 most famous cafes in the world. To match its Viennese-style interior, the daily special may include Wienerschnitzel. It’s also across the street from the National Theatre and is a great place for spotting local celebrities. www.hotelcontinental.no

On the ground floor of Grand Hotel and with grand views of Parliament and vibrant main street Karl Johan, Grand Cafe is famous for its lunch buffet of open-faced sandwiches – and they’re truly delicious. However, don’t leave without having a look at the large back wall mural, depicting the Christiania Bohemians, a group of artists and actors who daily frequented Grand Cafe in the late 1800s. World-famous playwright Henrik Ibsen came twice a day to read newspapers and enjoy a tankard of beer. He’s the man with the top hat in the far left corner of the mural. www.grand.no

Frognerseteren has much more than waffles on offer. September marks the end of late summer and the menu might include freshly drawn crayfish served in new and exciting ways. Later in autumn, you’ll find elk, reindeer and forest mushroom on the menu. www.frognerseteren.no

Just a few metres from the main market square Stortorvet, you can relax with a drink or a glass of wine to the tunes of cool jazz music, in the pleasant back yard of Bare Jazz. This bar is owned by well-known saxophonist Bodil Niska and doubles as a music shop, selling jazz records, of course. www.barejazz.no 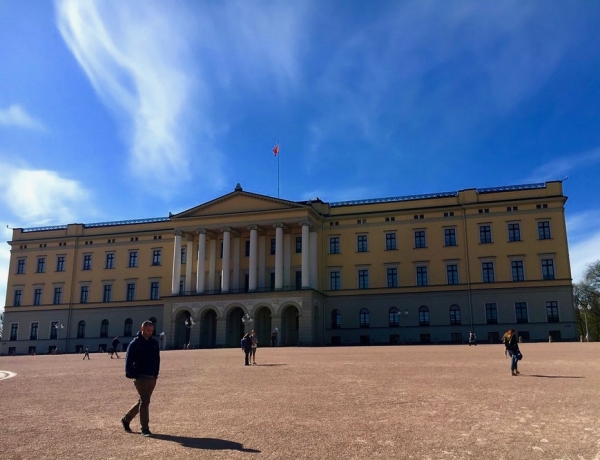 From May through September, while the day is long and light, locals gather at the many watering holes lining the quay side of Aker Brygge, to enjoy the sunshine and after-work beers, starting as early as 2:30 pm! Try one of 80 types of beer at Beer Palace, one of 400 sorts of Whisky at Underbar. If coffee is more to your liking, you have so many options, it’s hard to know where to begin. My favourite chain is Kaffebrenneriet. One of their quirks is they don’t have wifi, so people come here to read or talk F2F. Not sure how well that’s working anymore, now that everyone’s on 4G anyway. But the coffee is delicious, a world away from the bland international chains. www.akerbrygge.no

Lysebu is a fairy tale hotel situated in old log buildings around a courtyard in the forest, about 20 minutes from the city centre by metro. Locals like to show off Oslo’s surrounding nature and frequently organise international meetings at Lysebu. Often, long walks or a round of cross-country skiing is integrated in the meeting. The views from the top of Oslo are stunning and many of the rooms have floor-to-ceiling windows. Other bonuses include an indoor swimming pool, four saunas and an extensive wine cellar. www.lysebu.no 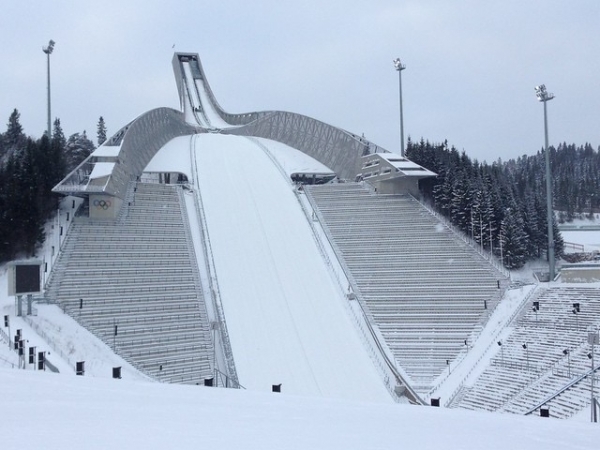 A pleasant 20-minute walk from the city centre is Hotel Gabelshus, located on a quiet street among embassies and stately homes in the West End. Behind the ivy-covered facade you’ll find 114 rooms, from small, yet fetching, feminine rooms of former parlous maids to large state-of-the-art oak and glass rooms. There’s a well-stocked library, fabulous paintings and a century of history in the details. www.nordicchoicehotels.no/Clarion-Collection/Clarion-Collection-Hotel-Gabelshus/

The venerable Grand hotel is as centrally located as it gets. It’s also the hotel of choice for visiting dignitaries, rock stars and Nobel Peace Prize winners who all wave from the balcony overlooking main street Karl Johan. The Louis XIV-style hotel is from 1874 and includes a Ladies Floor with all the amenities. www.grand.no

We caught up with Nina Risåsen, textile artist and Oslo local 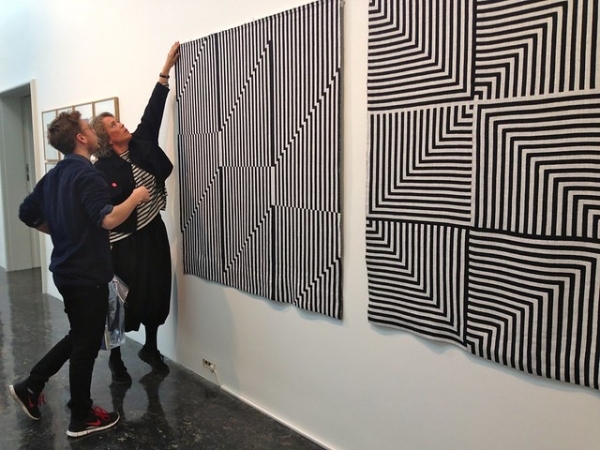 BEST OUTDOORS ACTIVITY? Island-hopping on the fjord! The islands are mainly uninhabited and offers excellent swimming. At Hovedøya Island there’s also the ruins of a medieval monastery and an art gallery. Walking along Akerselva River is another favourite, stopping for a swim along the way.

WHERE DO YOU SHOP FOR DESIGN? Norway Design is an exciting shop, featuring clothes and jewellery of Norwegian and European artists. Heimen and Husfliden sell Norwegian traditional crafts. For trendy fashion, I like to visit Eger at Egertorvet Square.

FAVOURITE BUILDING? I love City Hall. The building is a little art museum in its own right, decorated by some of Norway’s major artists: Per Krogh, Edvard Munch, Alf Rolfsen, Aage Storstein and Henrik Sørensen.

WHERE DO YOU TAKE VISITORS? The beautiful sculpture garden at Frogner Park. We’ll have lunch at Herregårdskroa or bring a picnic. The Vigeland Museum next door, with the sculptor’s apartment, is also worth seeing. 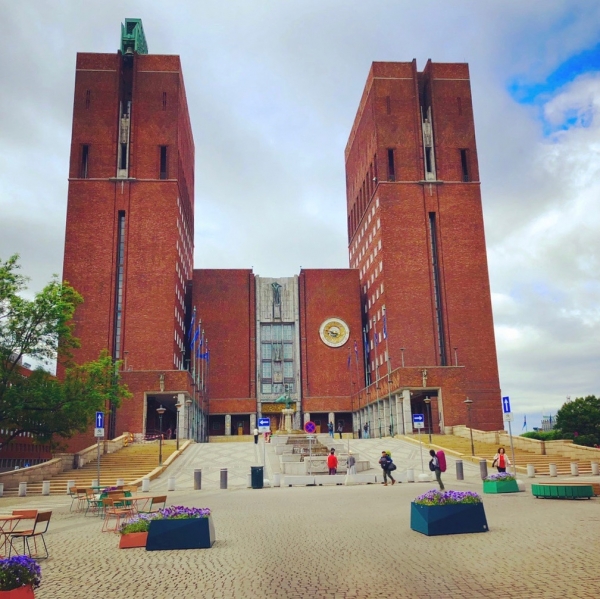