Some of the seven we quite liked, others had less to offer. However, this is a region – and country – undergoing incredibly rapid development. By next year, they may all have heaps of interesting things to see and do. All the same, for now, I’m happy to finish this series with friendly Fujairah.

A bit weary of visiting all these emirates, the girls weren’t exactly enthusiastic about travelling to yet another one. Nor was I, for that matter. But with just one to go, we couldn’t very well give up, so off we went. I’m glad we did. 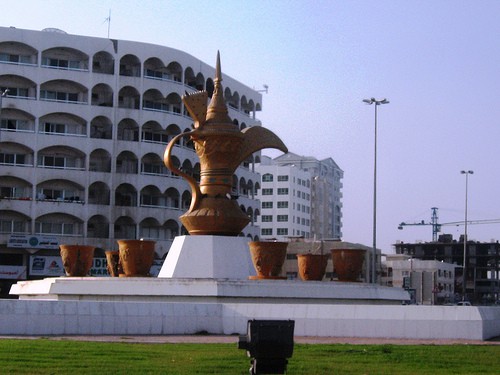 “Why you want to go Fujairah?” our driver asked. “It has nothing. It is like Ras Al-Khaimah.” Lonely Planet seemed to agree, saying there’s really no reason to linger in Fujairah. I beg to differ. As it turned out, the last emirate was to be one of my favourites. Fujairah city is basically one street, albeit a long one, with quite a few very modern high-rises, as well as a few creatively decorated traffic roundabouts. There’s also a pleasant promenade along the coast with a huge play ground spread out on the lawn along the waterfront; very child friendly. Furthermore, some of the country’s best beaches are in Fujairah.

But what I liked best was Fujairah Fort. For the first time in the UAE, I felt a real sense of history beyond the last 50 years. From the early 1500s, Fujairah fort is perched atop a hill; rather impressive-looking – and reminiscent of some of the Cathar strongholds dotted around the countryside of Languedoc that so fascinate me. We walked about, exploring all we could as the sun began to set. The stones were warm to the touch. A musty scent filled the air. On the not-too-distant horizon, the lights came on in the futuristic Fujairah city. I had a sudden impulse to camp out by the fort for the night. But we didn’t. 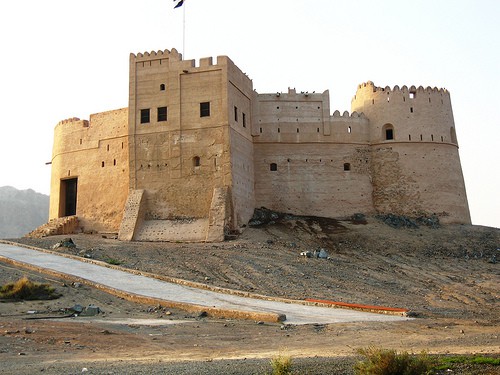 Near the fort, was Fujairah Museum. We skipped this one as well. A bit sad that. But Catarina had been so good for so many days of travelling. Now she said home and swimming pool, and I let it be her call. There’s really just so much you can ask of a 7-year-old.

Heading back towards Dubai, we passed through two villages, Masafi and Dhaid. Masafi is famous for its (bottled) water and the Friday Market (which in fact is every day), the latter being mostly carpet sellers along the road through town. According to our driver, mostly Russians stop to buy. I assume he knows what he’s talking about. No Russians about when we passed though. Coming or going. Not a good day for business, apparently. By the time we got to Dhaid, darkness had set in and the mosque was lit up. Very pretty. As was yet another creative roundabout. I like Arabian roundabouts. I really do.

Fujairah is wedged between various bits and pieces of Oman. To the south is Muscat. Such a wonderful name, isn’t it? Like Samarkand and Mesopotamia. And the Khyber Pass. Names so full of promise… adventure, excitement, even danger…

But I digress. I’d like to hire a car and drive from Muscat, stop for a bit at one of the Arabian Ocean beaches, then have a look at the unfamiliar Omani enclave Madha. I’d then continue to Musandam (the other and rather better-known Omani enclave) for a closer look.

The next Middle Eastern article on Sophie’s World will cover a day at the starkly beautiful Musandam Peninsula. And the Strait of Hormuz. Exciting stuff… maybe.