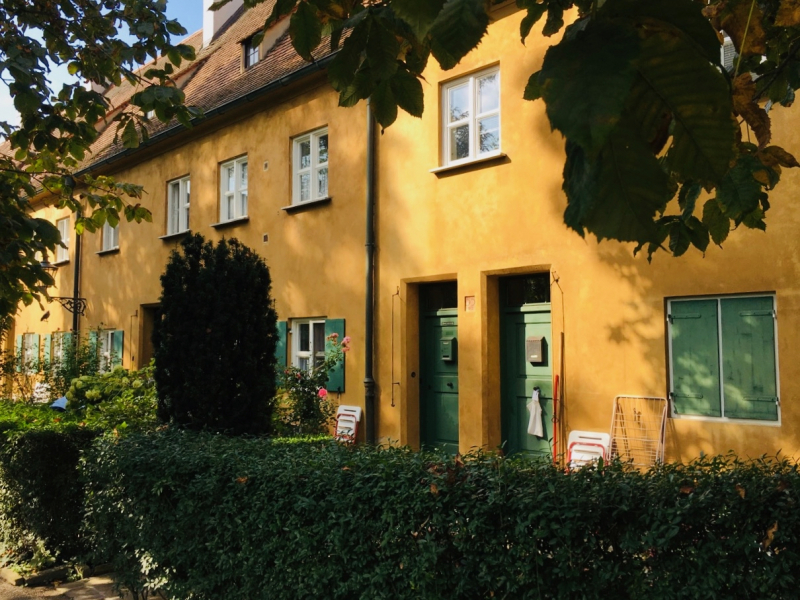 This unique neighbourhood in Augsburg is separated from the rest of the city by a wall with 7 gates.

Inside is 15 000 square metres with 8 straight lanes, a town square, pretty fountains, sculptures, two museums, a World War II bunker, a church, and trees and flowers everywhere. Most of all there are 67 nearly identical, stone houses, painted in a warm, golden yellow, with red-tiled roofs and green doors; 2 flats in each house, one upstairs and one downstairs.

But that’s not to be. This, you see, is Fuggerei, the world’s oldest social housing project. And living here comes with certain requirements. We’ll get back to those.

The richest person in history

To understand, we need to go back to 1520 – to a man called Jakob Fugger, a creative mining entrepreneur, a merchant and an international banker. In fact, the Fugger family replaced the Medicis, taking over many of the famous Renaissance family’s assets and, not least, power. Jakob coined mints for the Vatican and did business with the Habsburg emperors. In short, this was a well-connected man with many talents.

So clever was he, he was known as Jakob the Rich, and that was not just a frivolous sobriquet. With a net worth estimated at 221 – 400 billion USD in today’s purchasing power, Jakob was the wealthiest person in the world at the time – and still is! Richer than Bill, Jeff, Elon, and Bernard. 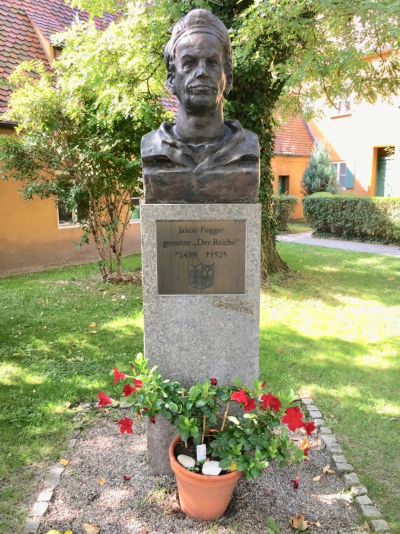 How little times have changed

Now, we can’t skip the fact that he wasn’t all round popular. Remember Martin Luther and his disgust at the Catholic church’s selling of pardons? Yep, I’m afraid the good Jakob was into that business, and Martin called him out. As he was also on good terms with the Vatican, he requested that the Pope repeal the prohibition of charging interest. Furthermore, the government sued him to try to stop his monopoly. Might he have been reborn? In 1955, in Seattle? Just asking…

88 cents and 3 daily prayers: then and now

Like that guy from Seattle, Jakob was also a philanthropist. He created what is now the world’s oldest social housing project still in operation. His idea was not to provide charity, but to help people help themselves. Rent at the Fuggerei was 1 Rheinischer Florin per year, a week’s wages for a craftsman – and equivalent to 88 cents today. In addition, he asked residents to say one Our Father, one Ave Maria and one Apostles’ Creed every day for his family. Not an unreasonable request for practically free housing, is it?

out of piety and generous munificence grant, endow and devote 106 dwellings with all provisions to their diligent but indigent fellow citizens

Unlike the rest of the world, inflation hasn’t fiddled with rent here at the Fuggerei. 500 years have passed, and the rent is still the same: for 88 cents a year and three daily prayers at St Mark’s Church on-site, you can live in these green, pastoral surroundings. Provided you fit the criteria, that is.

There are a few add-ons: in addition to the rent, a further 88 cents pr year must be paid for the Fuggerei cleric, and an extra lump sum for water, sewage, waste collection and cable TV. You’d be responsible for your own electricity, heating and telephone. And you would also be expected to help out with tasks: gardening, night-time guard duty and the like.

Also, the gates close at 22.00. Used to be, if you came home later than that, you’d pay the night watch 50 cents, or 1 Euro after midnight. This, we hear, is no longer the case – but if you come home after closing hours, it is customary to tip the night watch for unlocking the gate especially for you. 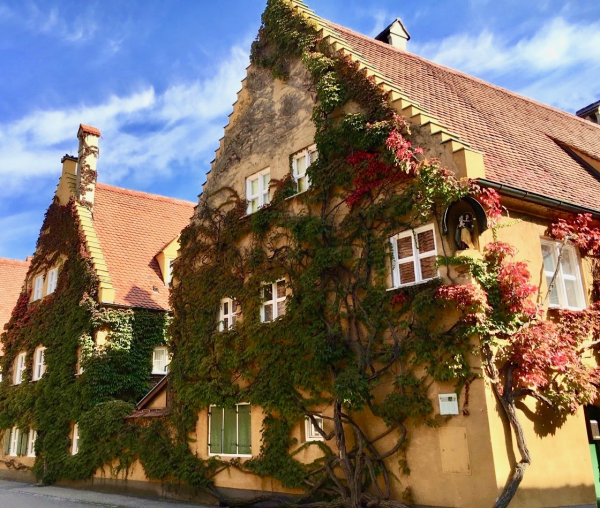 I couldn’t live here. You probably can’t either, unless you have lived in Augsburg for at least two years, are Catholic, poor and have no debt. Present-day residents must prove their need according to current social legislation. As you would expect, there’s a waiting list.

Back in its founding days, the original residents were needy day labourers and tradespeople of Augsburg. People of all ages, families with children; some children were even born here. For the last 100 years or so, however, Fuggerei has primarily been home to elderly; today’s average resident is 71 years old. In principle, though, anyone of any age or family constellation can live here.

The idea is to provide support for people who are actively seeking solutions to get back on their own two feet. The very low rent is meant to allow residents an opportunity to achieve economic recovery. People who have been in very challenging situations are given a chance to find peace of mind and regain strength so they can move out again after a while. 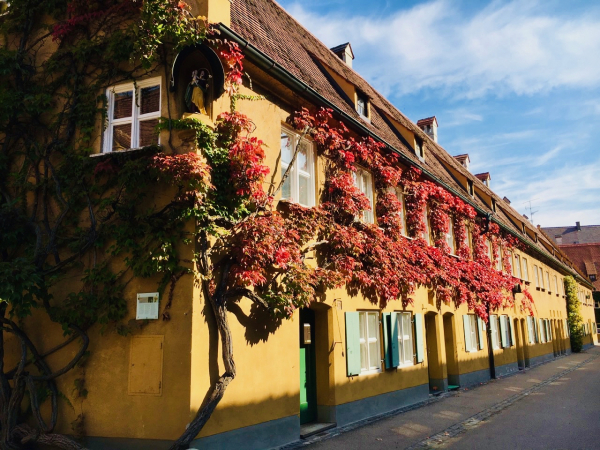 Over the centuries, things happened: During the 1600s, half of Augsburg’s population was wiped out due to plague, famine and war (the Thirty Year one). Many of the houses were partially or totally destroyed. But in the spirit of the place, the residents helped rebuild. In the middle 1600s, a school was set up for the children in the Fuggerei. Catholic, of course.

Jumping forward 300 years, Augsburg – and the Fuggerei – suffered serious bombardment in February 1944. 730 were killed in Augsburg, while here in the complex, 200 residents escaped harm in the air-raid shelter – a bunker – that had been built the year before. Only one Fuggerei resident died: Georg Lehner, an air raid warden.

After World War II, the Fuggerei was again reconstructed. Also, two widow buildings were built, for those that had lost their husbands in the war.

When tourism became a thing, a shop and a beer garden were added. 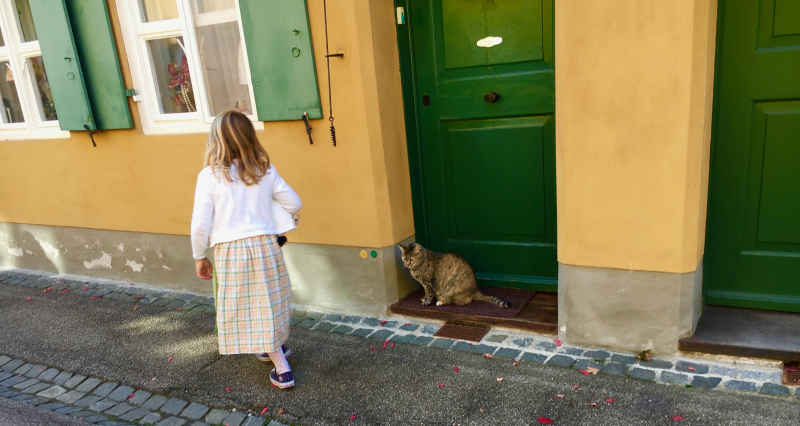 How has the Fuggerei survived through the centuries?

Fuggerei is a foundation, one of nine Fugger family foundations in continuous existence since the 1500s.

With 88 cents annual rent pr resident, it begs the question how the foundation can survive. Securing its right to self-determination throughout the centuries has been important. As has income from wise investments in forestry and real estate. These days, entrance fees from curious visitors also add to the coffers.

We want to know, don’t we? Did the Kardashians of the time ever live here?

I’d say even more exciting people have resided in the Fuggerei. In the upstairs flat at Ochsengasse 52, lived one Dorothea Braun. Think having a kid throwing a tantrum in the shop for not getting the latest iPhone is bad? If so, please bear poor Dorothea in mind. She was accused of witchcraft by her own 11-year-old daughter. On 26 September 1625, she was the first in Augsburg to be tortured, beheaded and burnt as a result.

Later in that century – in 1681, a bricklayer named Franz Mozart moved in. He went on to become the great-grandfather of the world’s most famous composer. Wolfgang always features in my imaginary dinner parties, so naturally, this discovery gives me a little flash of joy. 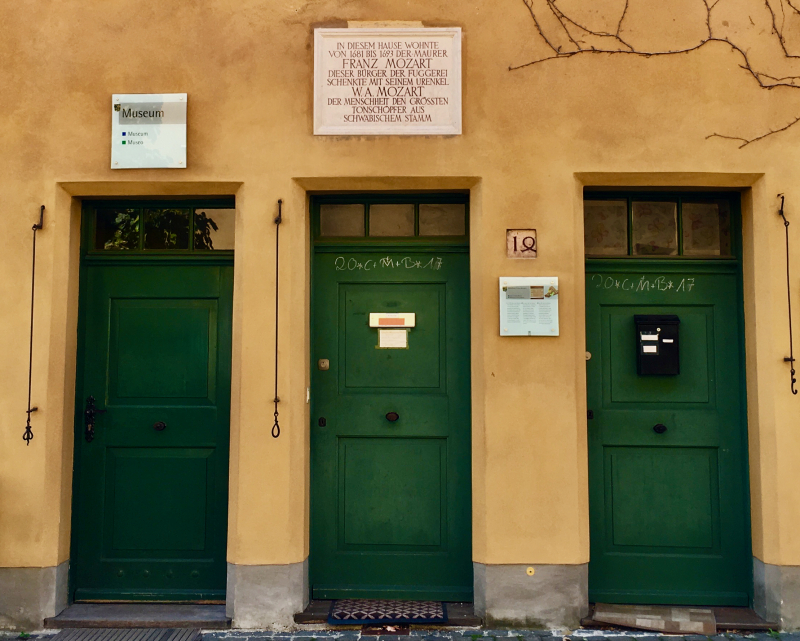 Notice the house number? It’s the original 16th century one. Also, have a look at the doorbell pulls. Since all the buildings look very similar, you might open the wrong door, especially at night. Cleverly, each flat was fitted with bell pulls, all in different shapes and sizes, so if you couldn’t recognise your own door visually, you could feel it. (You can see yet another type in the photo with the little girl above.) I can think of a few current places that would benefit from a similar idea.

Presently, the most famous local resident is the magician Zauberer Hardy. Who said being an artist was lucrative?

What to see at the Fuggerei 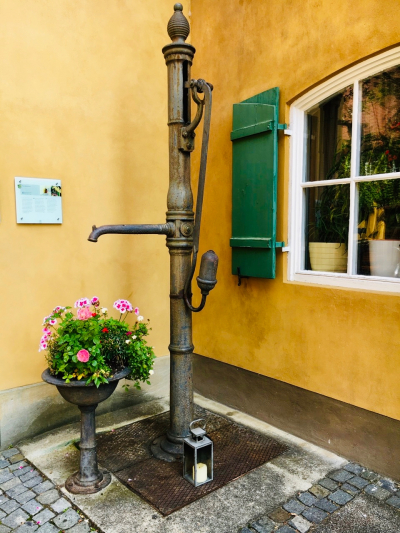 Hand-pump water wells from the 1700s

Wandering along the paths, past the houses and the squares in the Fuggerei, I feel comfortable. It’s orderly, in a cosy sort of way. Very German; a picturesque, peaceful and organised space. 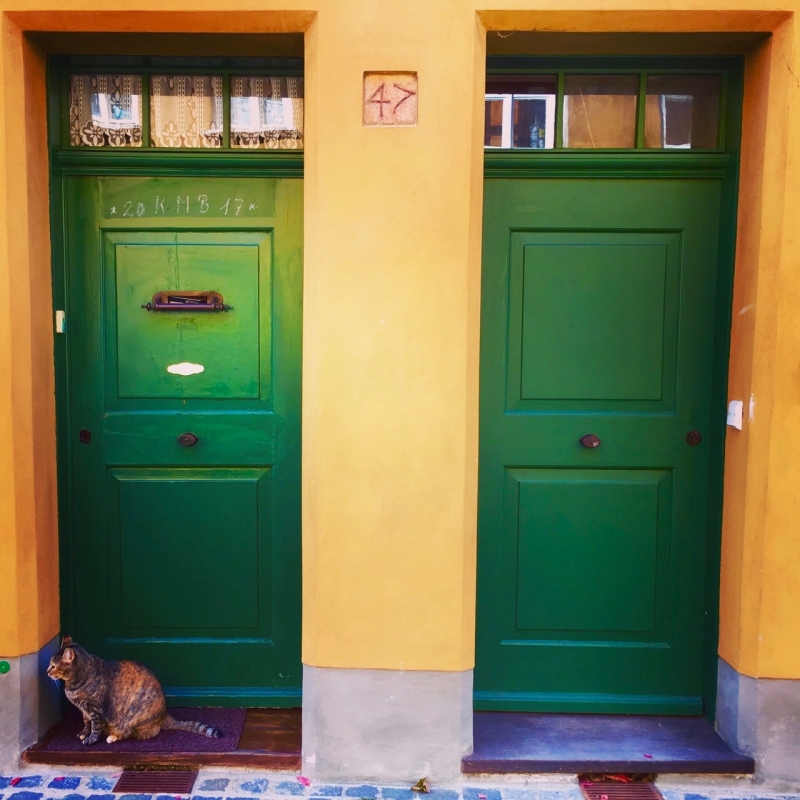 The Fuggerei museum of everyday life

The ground-level flat on Mittlere Gasse 13 is the Fuggerei Museum, where you can get a feel for how life in the complex has changed over time. The three-rom flat is preserved as it was before 1900, the only one in original condition: exposed timber beams, a wood-burning stove in the kitchen, a four-poster bed. 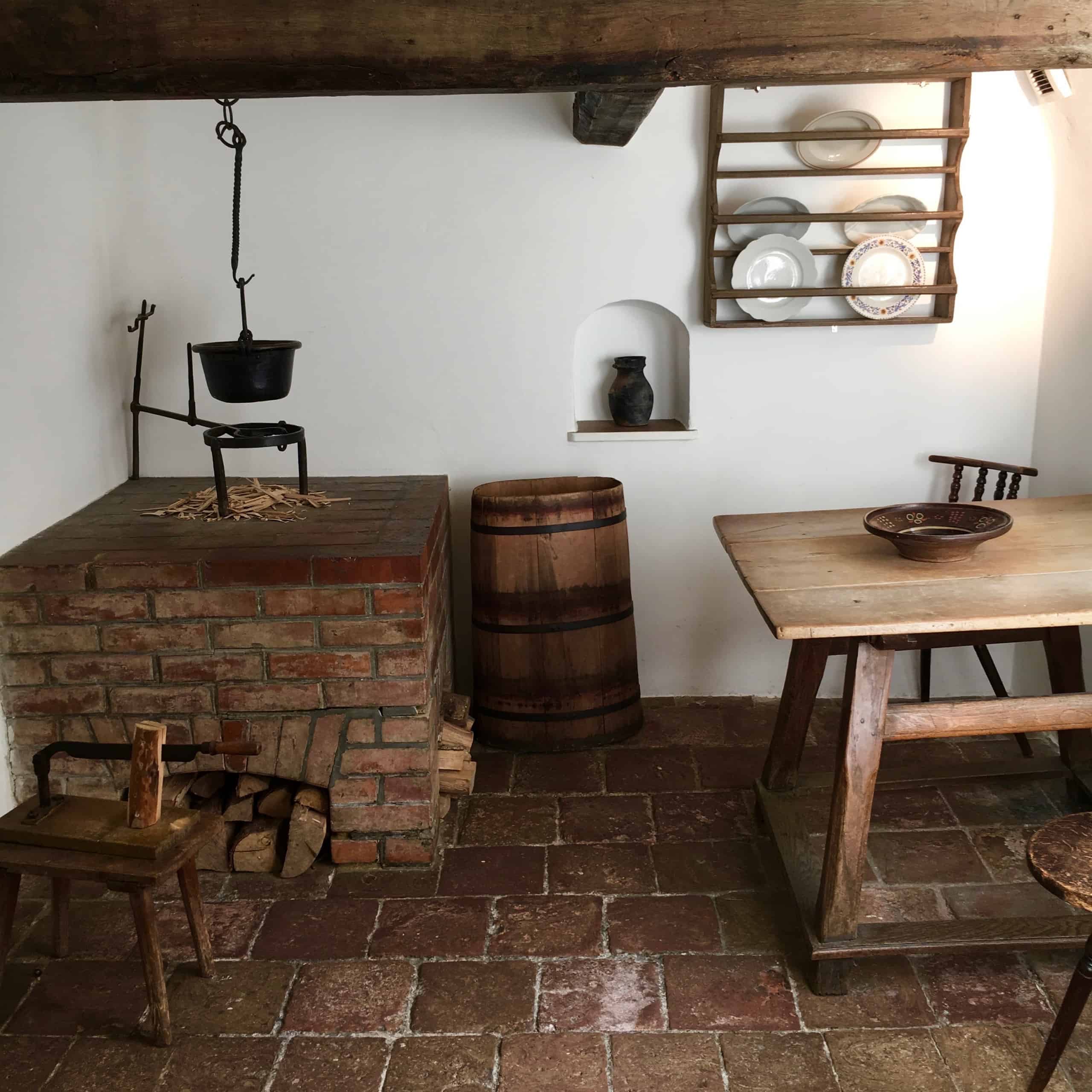 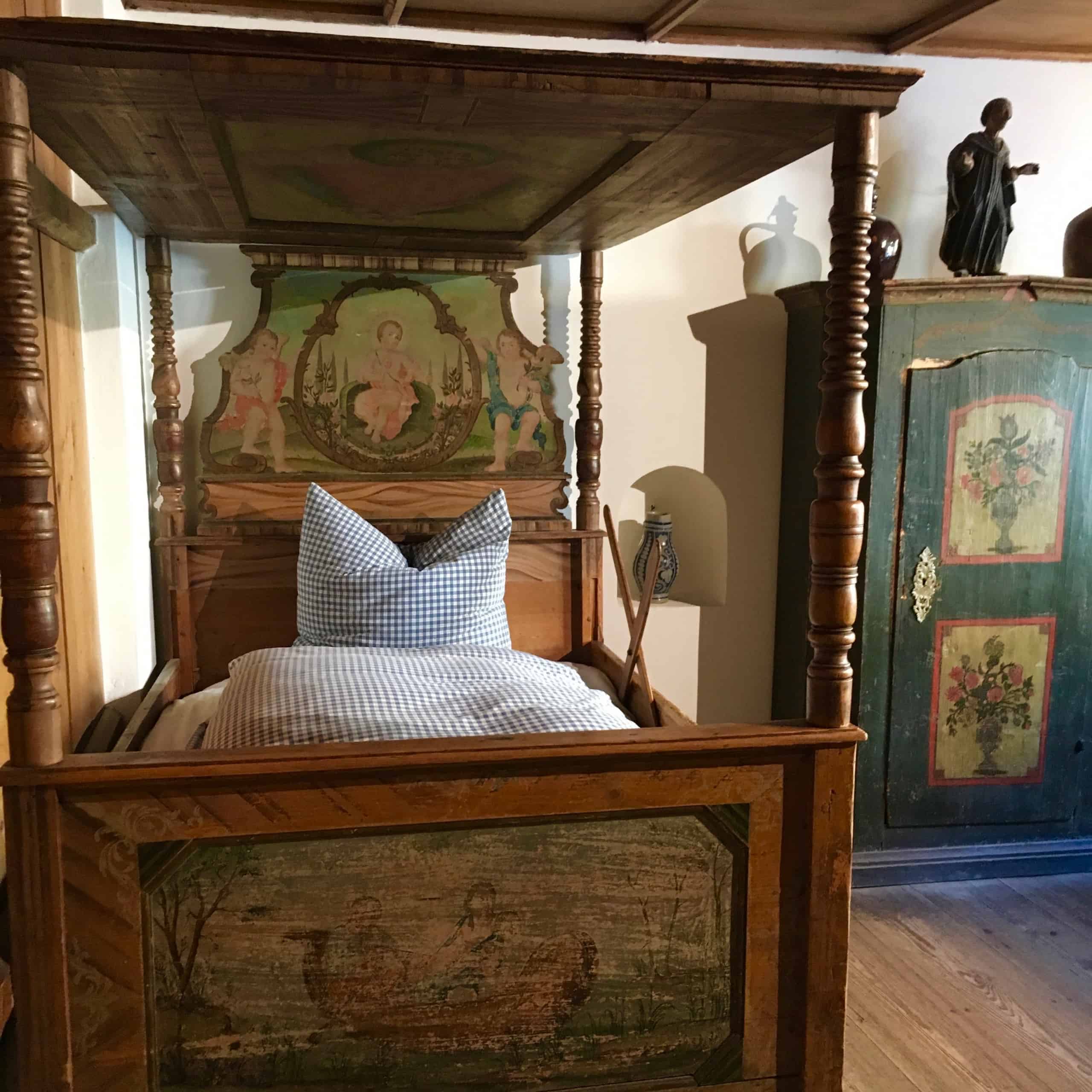 Have a look at this clever little contraption in the drawing here: you could unlock the front door with a lever inside the living room. Through a small window, you had a view of the hallway and could see who was entering. 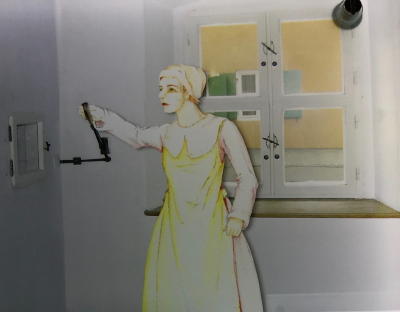 We enter Ochsengasse 51, next to what was once poor Dorothea’s place, to get a glimpse of present-day life here. 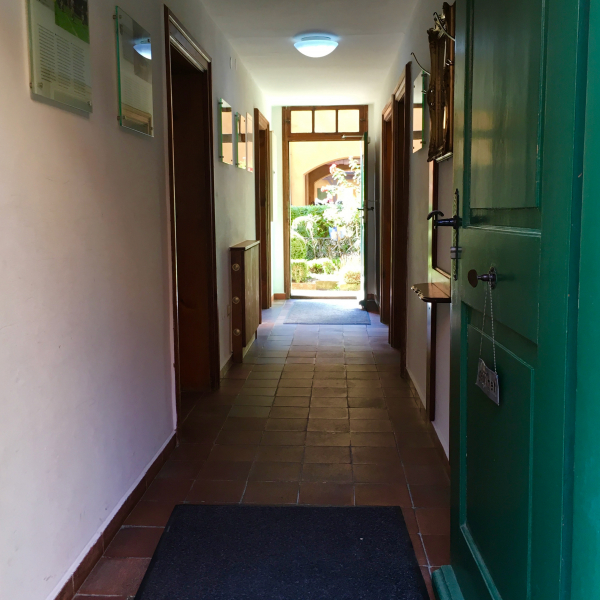 This fully furnished show flat is the only one left intentionally uninhabited, and – of course – the only one we can see. Two rooms, a kitchen, a bathroom and a hallway. Lower floor flats have a back garden, while top floor flats have attic space available. Furniture varies, depending on the individual residents’ taste and budget. 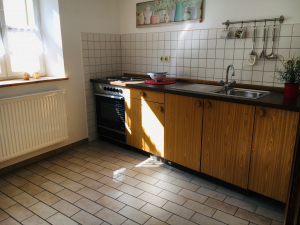 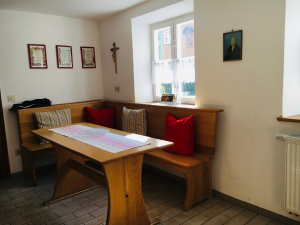 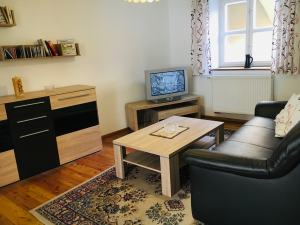 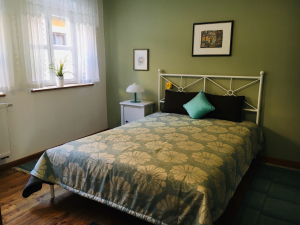 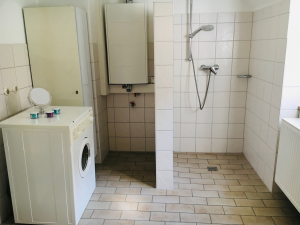 Residents and employees walk around, ready to chat, tell stories and answer questions. 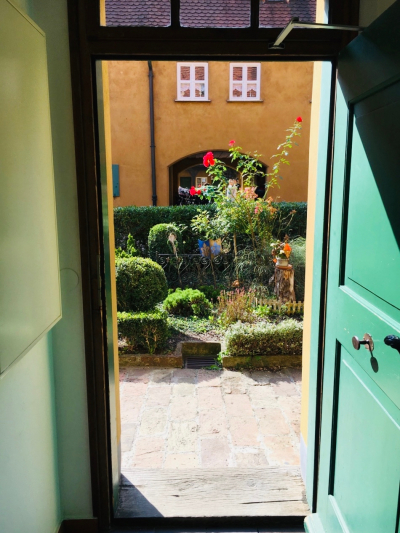 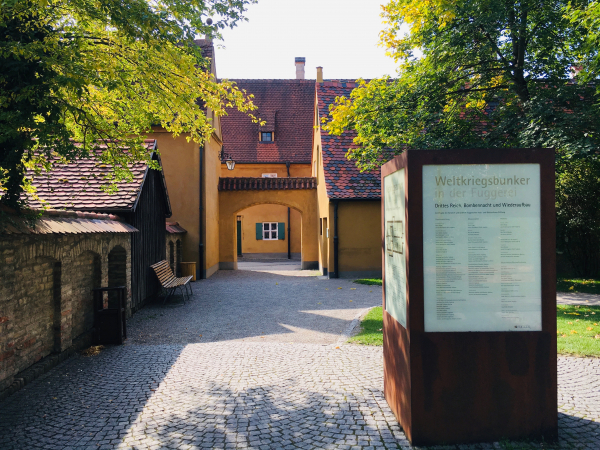 Walking around a corner, we see an open door, and stone stairs leading down to the World War II bunker, preserved as it was. 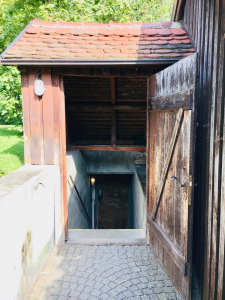 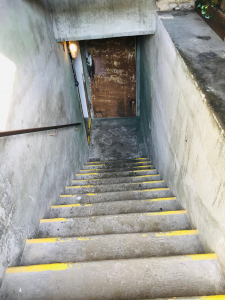 Inside is the bunker museum, with exhibits documenting the 1944-attack on Augsburg, the destruction of the Fuggerei (about 70% of the complex was damaged), and the reconstruction. We see a collage of Hitler’s visit to Augsburg in 1935. We see Die Deutsche Volksgasmaske – the German people’s gas mask – and instructions on how to use it. We see documentation on the production of Messerschmitt at the Augsburg plant; why the city was a target of airstrikes. 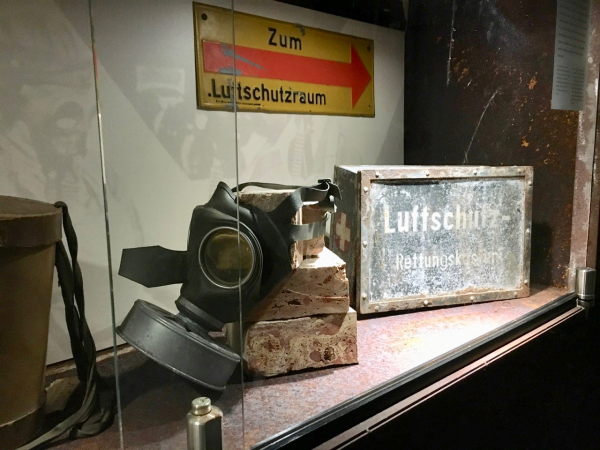 For a bit of balance, we pop into St Markuskirche, where the residents come three times daily to say their prayers for the founding family. I settle for lighting a candle. As always. 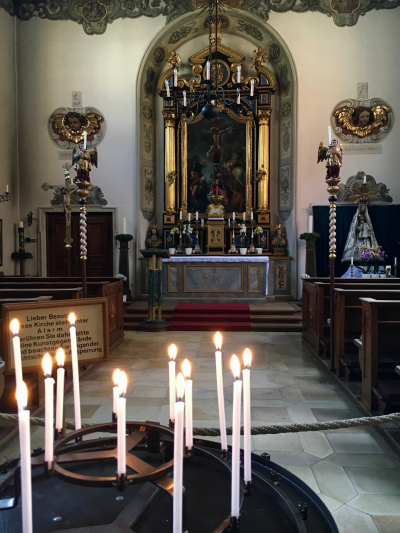 All this exploring makes a girl hungry. Laura, fellow travel blogger from Finland, agrees. We have dinner at Tafeldecker, where head chef Torsten Ludwig sets the table with reasonably priced homemade dishes. There’s a menu, as well as a buffet with small dishes so you can create your own meal.

We’re sitting inside, since the evening is slightly chilly, but just outside is the pleasant beer garden. Eavesdropping on two lovely ladies at the next table, we hear a bit about daily life at the Fuggerei, and get a sense they feel lucky to live here. 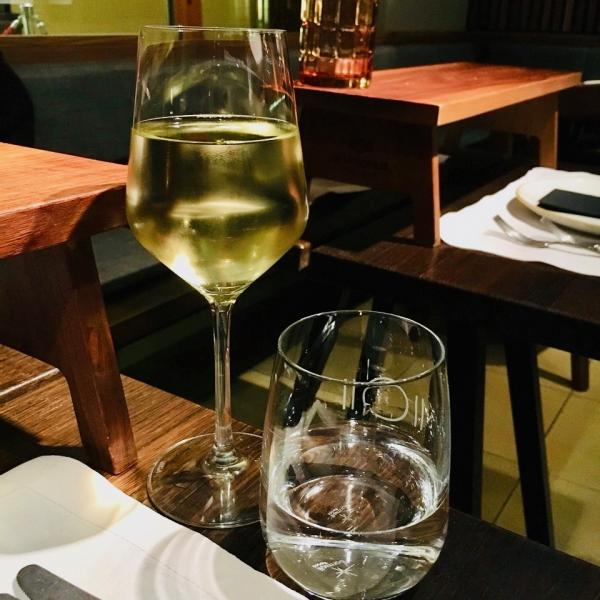 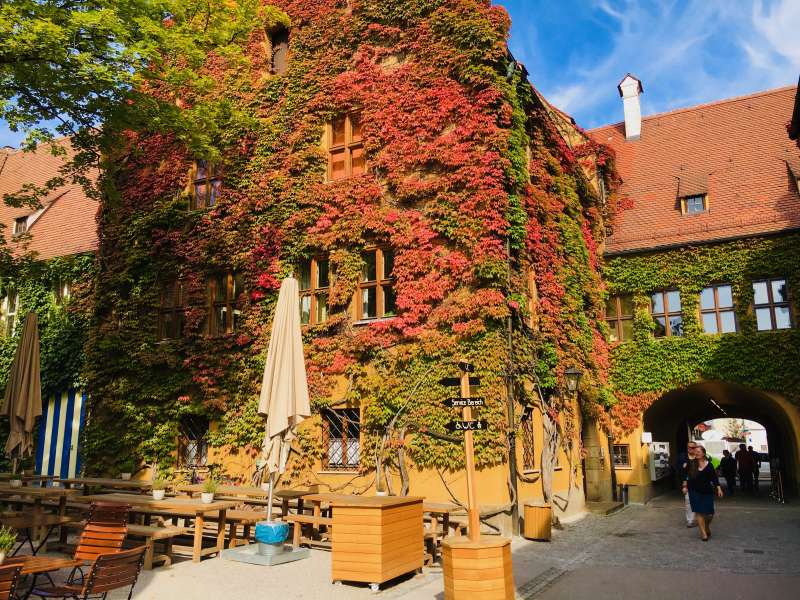 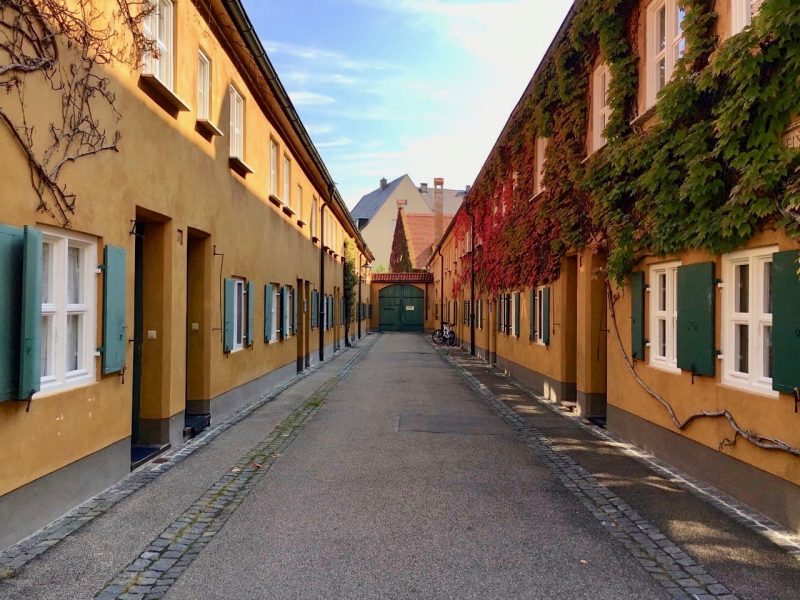 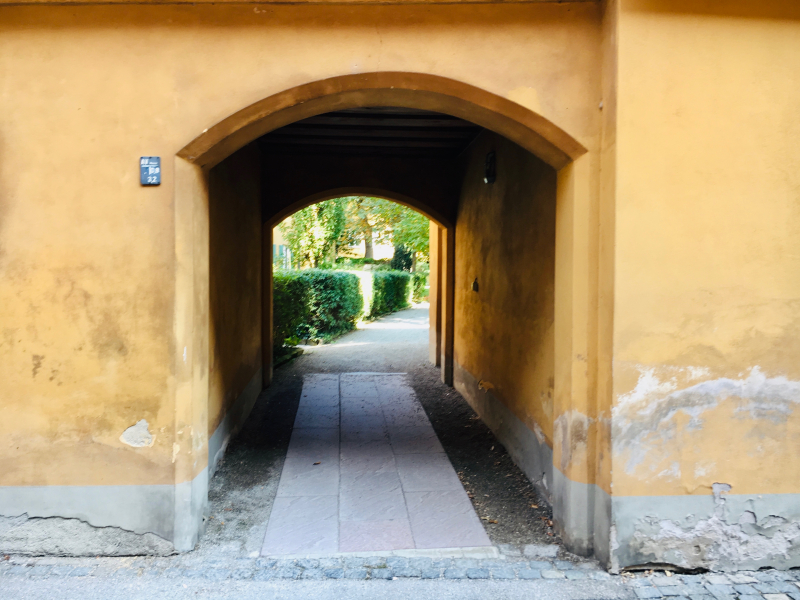