As I write this, I’m sitting on the terrace of Ashanti Guesthouse in Cape Town, thinking about Botswana.

I was once in Gaborone, Botswana’s somewhat unassuming capital. Just for a weekend, really. Everything was closed and the town was very quiet. My young self, well… younger self, was easily bored, so after a few days I hopped on a bus to much livelier Jo’burg across the border. 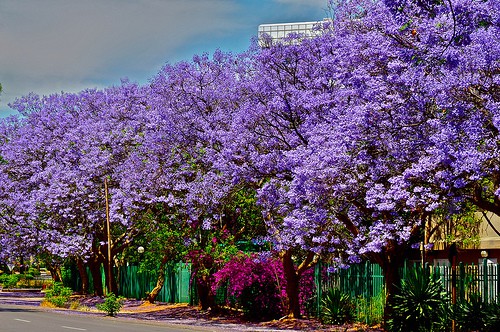 I was left with an impression of a rather dull town and had no particular desire to return. Then I read about Mma Ramotswe and can’t help but feel I just might have missed the more subtle charms of Gaborone.

These aren’t travel books in any traditional sense. Nevertheless, the author creates such a wonderful sense of place, and I always fall in love with the characters. Even the ones I don’t like.

Gaborone has come alive through the eyes of this inimitable, traditionally built lady detective who so clearly loves her country. I’m eager to return and have a fresh look: I want to sit on the terrace of the President Hotel, drink bush tea and watch life as it passes by. If I sit there long enough, I might see all of Botswana amble past. Even cows.

I want to walk along Zebra Drive – and even though Mma Ramotswe won’t be sitting outside her house with a cuppa, who knows… another woman – traditionally built, maybe – will sit in her garden, willing to talk to a curious stranger walking past. Perhaps with jacaranda trees in her garden…

I’d like to window shop for shoes in Riverwalk Shopping Centre, thinking which inappropriate pair would appeal to the otherwise strict Mma Makutsi, associate detective. I’d like to bargain for souvenirs at the many stalls along the Mall, I’d like to meander through the tree-lined Village, the old part of town.

During the last few days, I’ve played in Cape Town and surrounds. The Western Cape province is brimming with wonderful things to see and do. It’s also full of evocative experiences, of provocation and sadness. I’ve walked through the heartbreaking, but not altogether discouraging living conditions of Imizamo Yethu township, I’ve learned about canned hunting and I’ve seen the cell of the world’s most famous inmate, prisoner 466/64. I’ve also seen the spectacular scenery of the Cape Peninsula, learned of a worthwhile cheetah rescue project, and I’ve hung around penguins. I’ll tell you about all of that later.

But for now, I simply wanted to talk a little bit about Botswana.

Have you been in Gaborone – or elsewhere in Botswana?