A few months ago, Viator got in touch, inviting me to try one of their tours. This spring has been extremely busy, but I finally managed to find an extra day during a visit in Ireland earlier this month. Looking through the extensive menu, I settled on a Viator combination rail/coach tour from Dublin up to County Antrim in Northern Ireland.

If you’ve been following this little blog, you will know I like exploring World Heritage sites, so Giant’s Causeway was the main draw here. The tour also included a Norman castle, a drive along the Antrim Glens and the opportunity to cross the Carrick-a-Rede rope bridge.

On a Monday morning, we start out from Dublin’s Connelly station, with a comfortable train journey up to Belfast. The day started too early for breakfast, but no worries: Irish Rail offers food and drinks for sale from a trolley.

In Belfast, we hop on a coach and head north. We stop for a quick peek at Carrickfergus Castle just outside Belfast – more of a leg stretching stop, really; then get on with the journey along the gorgeous, green Antrim Glens. 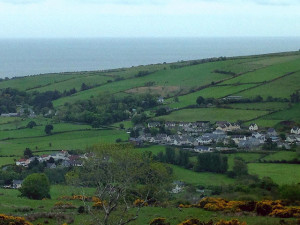 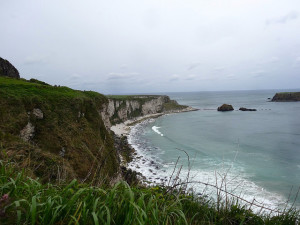 The scenery is dramatic all along here, with steep cliffs. It takes a skilled driver to manoeuvre the narrow roads and hairpin turns; all the while entertaining us with fascinating facts and local legends. 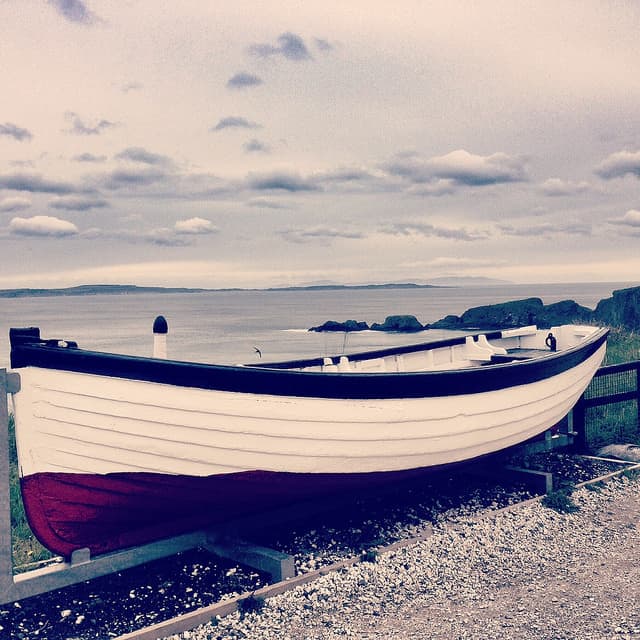 Our first proper stop is the Carrick-a-Rede rope bridge, a wiggly thing spanning a 20 metre gap – 30 metres above raging waves – between the rocky island Carraig a’ Ráid and the mainland. I’m anticipating the crossing with glee.

The rope bridge was installed by local fishermen 350 years ago, as an easy way to get back and forth between the island and the mainland with the catch of the day. Though I hear the ‘easy’ bit is debatable.

Sadly, I never find out for myself. Wandering along the path toward the bridge, I see a line of people ahead in the distance. I can’t see the bridge itself, so I look through the camera zoom lens as I walk. 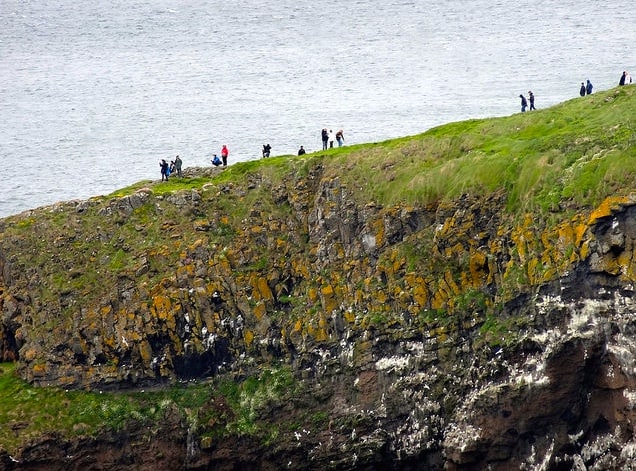 Now, as I’m sure you know, playing with a camera is best done while standing still. But I seem incapable of doing one thing at a time. Naturally, I trip – and sprain my ankle. Again.

From the car park to the bridge is about 1 km – much of it an easy path. But as you near the bridge, there are steps, rough ones. Slippery when wet. Nothing for a sprained ankle, I’m told in no uncertain terms. If I were to undertake such an endeavour, I would need much more than the allotted time. Well, far be it from me to be that person everyone on the bus waits for.

Time restrictions. There, in a word (oh, alrighty then, two words) is the main drawback of organised tours. On the upside, I’ve had many a knowledgeable and amusing guide. As we’re in Ireland, the entertainment value is practically guaranteed and this tour is no exception: irreverent personality, sharing little snippets of wisdom here, local lore there, stories I wouldn’t have otherwise heard.

I’m determined to come back another time to try the rope bridge. For now, I limp back, with plenty of photo stops (actual stops now) along the way.

I see Carraig a’ Ráid (though still not the bridge, it must be around a corner). Then, shifting the camera slightly, I see the island of Islay. Scotland is just there! A keen swimmer could crawl across, treacherous, freezing waters notwithstanding. 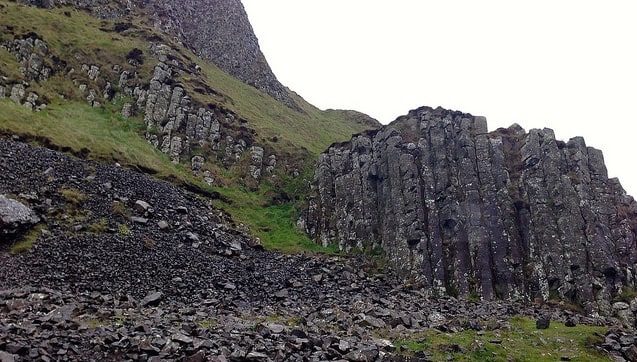 The cold, wet, windy weather is doubly so here at Giant’s Causeway. That seems somehow appropriate.

Down at the shore, the rain turns into hail, hitting my eyes with a vengeance. When I turn around, the wind gets a good hold of my hair. Either way, seeing is a challenge. 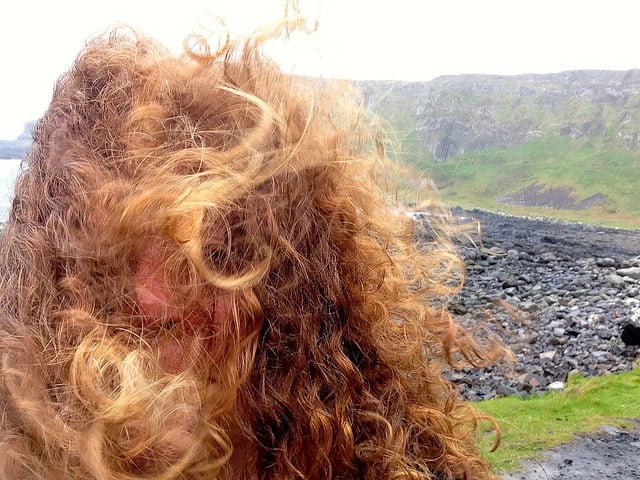 For a while, I have the place practically all to myself. Every once in a while, a loner walks past, braving the elements. Possibly another Viking descendant. We like a bit of weather. 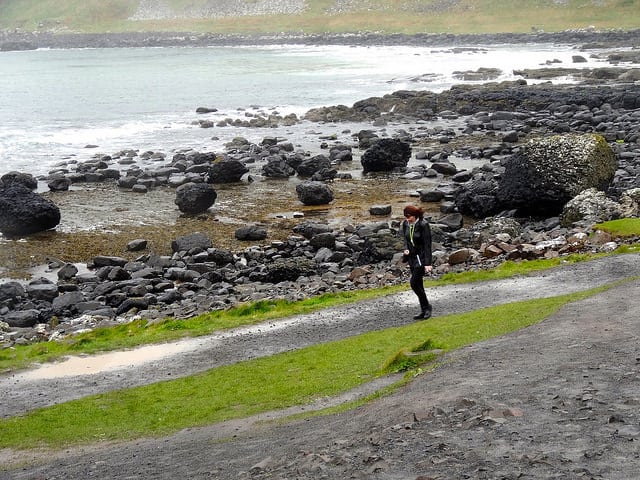 Giant’s Causeway consists of thousands of basalt columns of varying heights, formed as a result of a volcanic eruption. That’s the scientific version.

The fun version goes like this: Once upon a time, Scottish giant Benandonner challenged his Irish counterpart, Fionn mac Cumhaill, to a fight. Fionn couldn’t say no, of course, so he built a causeway across the channel where the two could have it out, determining once and for all who’s the coolest giant.

When Fionn sees the size of his opponent, he changes his mind.  Oonagh, his wife, helps out by dressing him like a baby and hiding him in a cradle. Then, when Benandonner sees this huge baby, he naturally assumes the baby’s father is enormous. Benandonner runs back to Scotland, destroying the causeway behind him as he goes, so Fionn can’t follow.

Who’s to say? At Fingal’s Cave, across the sea in Scotland, there are identical basalt columns. 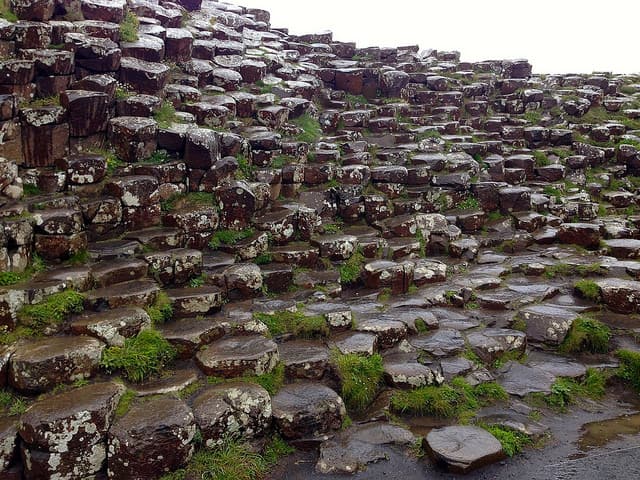 Have you visited Giant’s Causeway? Rain or shine?

Giant’s Causeway and Causeway Coast is a UNESCO World Heritage site. Here are other heritage sites I’ve visited around the world.

Disclosure: I was in Northern Ireland as a guest of Viator. The messy hair and opinions are mine, all mine.