World at a Glance: The Great Pyramids at Giza 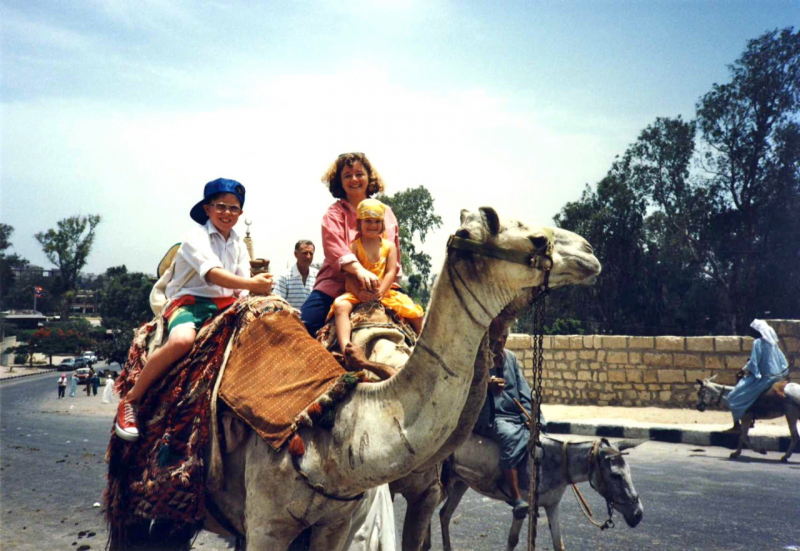 So we’re in Memphis.

Well, not now. But in this photo here.

It’s the original Memphis. Not the one Cher is walking in. Or actually Mark Cohn; he sung it first – and wrote it. Cred where cred is due. But I digress.

Memphis was the capital of ancient Egypt, and is located on the west bank of the River Nile, 20 km south of Cairo. Approximately where Giza is today.

The pyramid plateau used to be in the middle of the desert. When we were there, in the last decade of the last century, that was still the case, to an extent. No more, I hear. The surrounding Giza, once a sleepy village, is now a sprawling metropolis with nearly 10 million residents. It’s the second largest city in Egypt, and the fourth largest in Africa!

Now, Khufu gets all the attention. (You might know this pharaoh and his pyramid by the Greek name, Cheops.) And as the Khufu pyramid is the only one remaining of the Seven Wonders of the Ancient World, no, eh, wonder. But at the Giza plateau, three kings were buried: Khufu, Khafre and Menkaure. Father – son – grandson, all from the 4th dynasty, in the 26th century BCE, the golden age of the Old Kingdom of Egypt.

As construction projects go, it really is a wonder, especially considering the pyramids were built nearly 5,000 years ago, a time when most people in the world were nomadic hunter-gatherers. Built entirely without mod tech. The ancient Egyptian civilisation must surely have had the best architects, designers and engineers of all time. For nearly 4,000 years, Khufu’s pyramid remained the tallest building in the world.

Up close, you’ll see that the pyramids are massive structures, with thousands and thousands of enormous granite slabs. They are of different sizes, larger ones at the bottom (6 tonnes) and smaller ones on top (ca 1.3 tonnes)

It has been more than 20 years, but I still remember wandering around the base of Khafre’s pyramid (at 136 metres, it’s the second tallest), staring in awe, wondering if the concept of time really is an illusion.

Khafre and the Great Sphinx 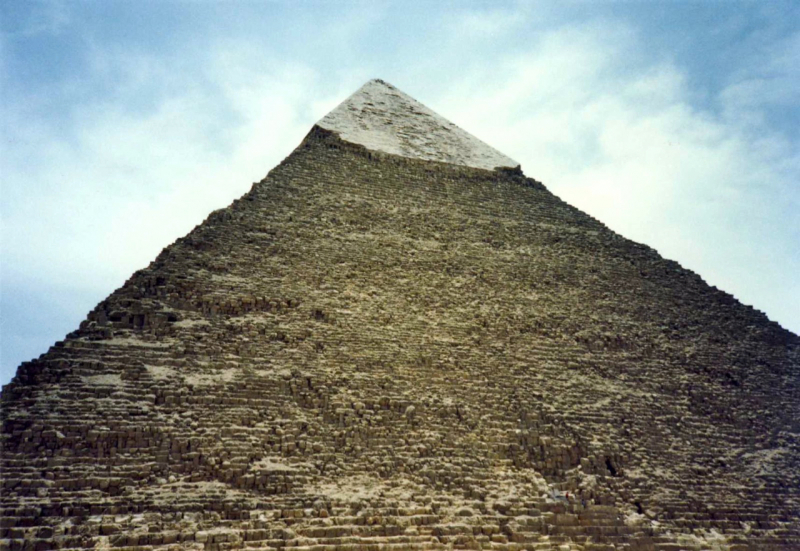 The pyramid that was built for Khafre is distinguished by the white bit on top. Also, the mysterious sphinx is probably his. Khafre’s head, with a lion’s body: one of the oldest – and one of the oddest – sculptures in the world.

On a scorching June day (45°C), Ali and I stepped into Khafre’s pyramid. Nice and cool, it was. And dark. And exciting. But while it looks massive on the outside, the inside feels anything but. Low, narrow, steep corridors obviously not built for contemporary grown-ups to walk comfortably through. Expect to have to crouch very low – and also to make room for those going in the other direction. Many were those who looked with envy at my 4-year-old as she laughingly bounced through the tunnel – head held high.

In the interior funerary chamber, you can see the stone sarcophagus. It’s empty, but people queue to have a peek inside it anyway. We did, too. Ali was a bit disappointed to find it empty. She may have expected a full-on mummy like the one she had seen in her books.

There is nothing else inside besides the empty sarcophagus. After all, grave robbers have been at it for nearly 5,000 years. 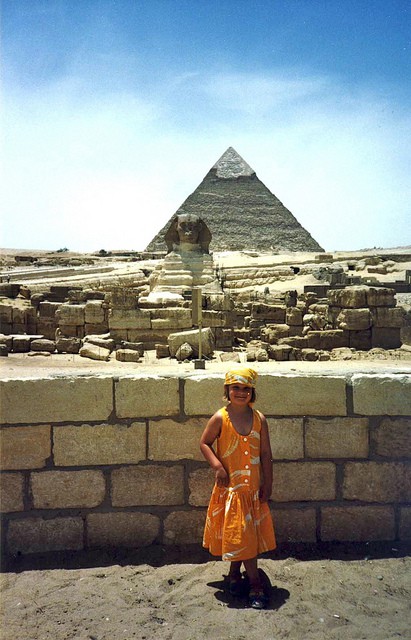 Can you climb the pyramids at Giza? No, you cannot. You are not allowed. That, of course, doesn’t mean everyone abides. I’ve heard stories of bribing guards to take you up for a sunrise of unrivalled dimensions. Some even speak of sleeping there.

I’m going to go ahead and say don’t do it. Just don’t! 5,000-year-old stones, however solid, are fragile – and neither you nor I have the right to do anything that might damage these mind-boggling structures.

Not going to say much about the crowds, or the incessant peddling of camel rides and souvenirs, except to say practice a little Arabic – especially the words la shukran (no, thank you). You will find you frequently need it. Back when we visited, things were pretty easy. Touts were there, but not very many. Also, security was laid-back and terrorism wasn’t much of an issue. This was a few years before the massacre in the Valley of the Kings. I expect it’s much different today.

Giza is obviously somewhere I will return to, not least to see the sun rise and set over those magical constructions that reminds you that time is of no consequence. On the downside, I hear the best view of the Sphinx is now through the window of a pizza restaurant. Not going to mention which one, as I don’t want to give it any attention.

World at a Glance is a series of short articles here on Sophie’s World, portraying curious, evocative, happy, sad, wondrous or unexpected little encounters. The pyramids at the Giza plateau fit several of those categories.