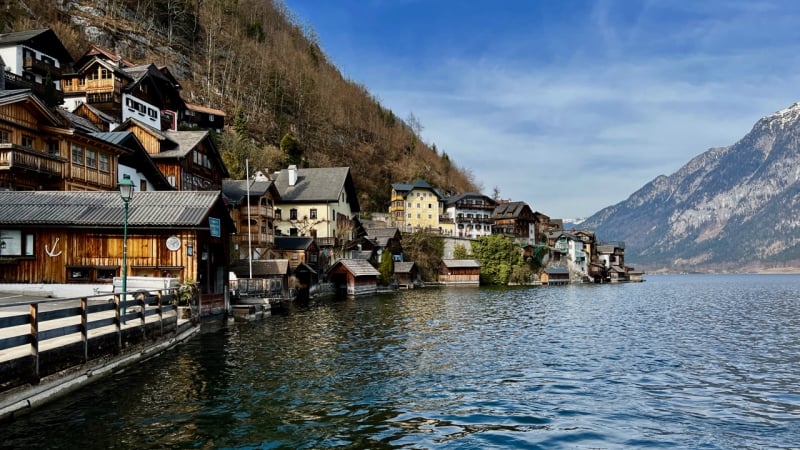 Continuing my little exploration of world heritage in Austria, I’ve left Salzburg, after circling the city centre a few times. The SatNav girl and I, we never seem to hit it off. But finally, I’m on the road heading south on B158, better known as Romantikstrasse, Austria’s romantic road. And it’s not hard to see why. Pretty landcapes along the road. Emerald lakes. Lofty Alps towering above. Here, a castle. There, a monastery. I drive up a mountain, then down in a valley. Up another mountain, down another valley.

Picture postcard perfect Hallstatt is my goal for the day. You will have seen the ‘grams, I’m sure. As background for a selfie or ten, if nothing else.

Walking out of the car park, I’m met by this sign. 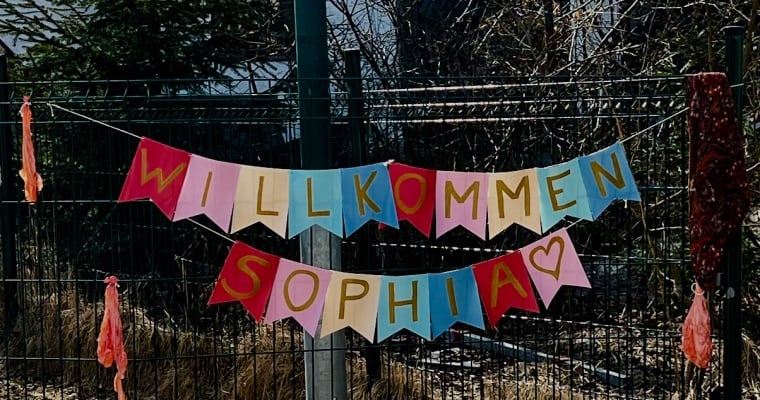 Why, thank you. What a lovely greeting. Happy to be here in Hallstatt.

(The photo actually looks like this. I’m guessing this Sophia is a few years younger than me. But I’ll take it anyway.) 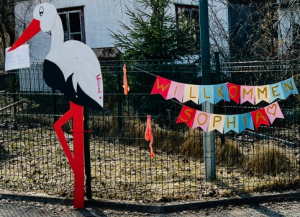 Want to come along and expore Hallstatt with me? The first thing to do is get an overview. Let’s you and me find the Hallstatt Salt Mine cable car and go up, up, up – into the high valley above the village. 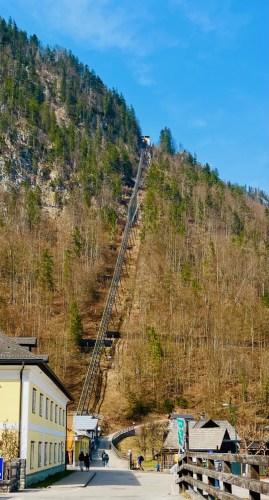 It’s also possible to walk up along an old miners’ path. Doesn’t take a great leap of the imagination to see that it will require a bit of time. And some serious breath work. Takes about one hour for a person of average condition and agility. We have that, don’t we? But we’re also a bit lazy. Hm… 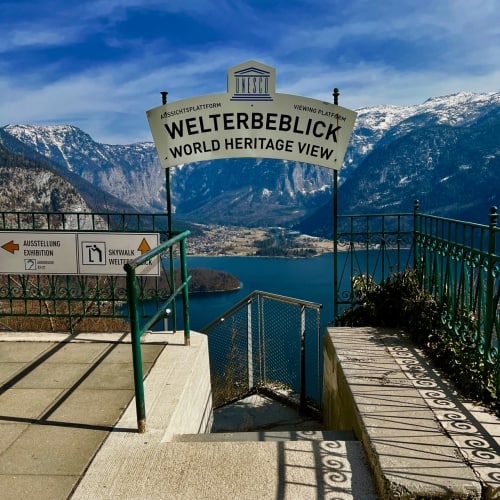 From the cable car station, a glass lift brings us even further up – and onto a free-floating skywalk and viewing platform. 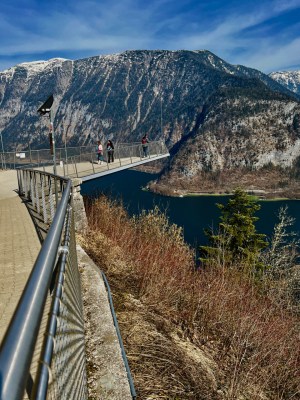 The reward: this view! 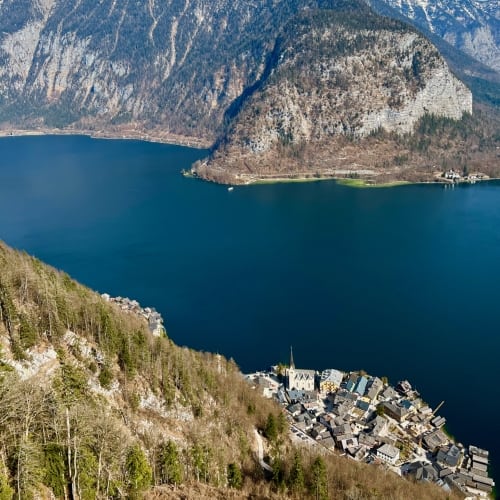 Spot the village down below? We’re heading there in a bit. 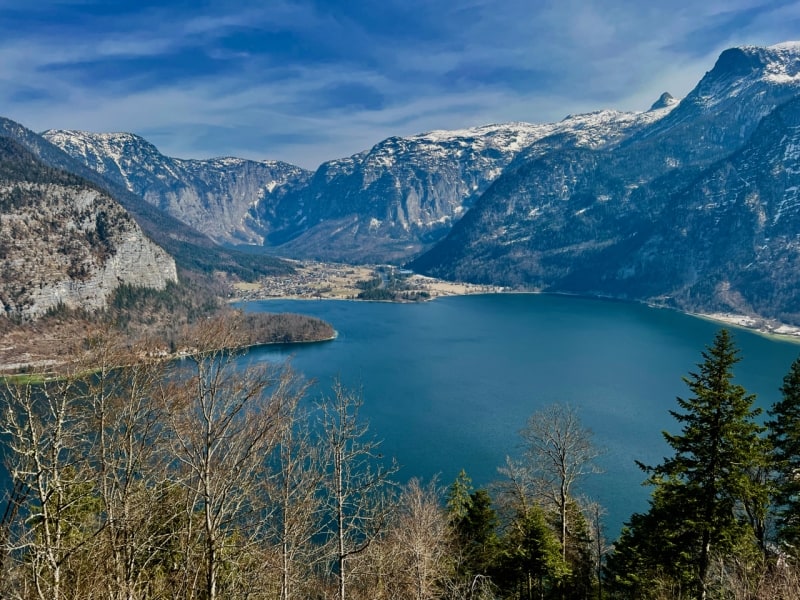 I think we can agree Austria is a stunner.

Top of Hallstatt is about more than vistas, though. People have flocked to this valley for 7,000 years. Salt is plentiful in these mountains, see – just a few metres below ground. And salt, as we know, has always been incredibly important as a preservative. It draws out water and dehydrates food. It kills microbes. We don’t have to think back further than the invention of refrigerators.

And we preserve food with salt even today, of course. Think smoked salmon, pickled onions and, well, pickles. Archaeologists have found evidence of active salt mining here for at least 3,500 years – and it is still being mined. It is the world’s oldest working salt mine.

There’s an Early Iron Age grave field in the high valley near the mine. Now, food isn’t the only thing that can be preserved with salt. Any biological matter can – textiles, wood, leather, etc. Which means just about everything organic that has been left in and around the mines over the millennia has been preserved. Even human remains.

This info board welcomes us at Top of Hallstatt, taking us through the millennia of salt mining. 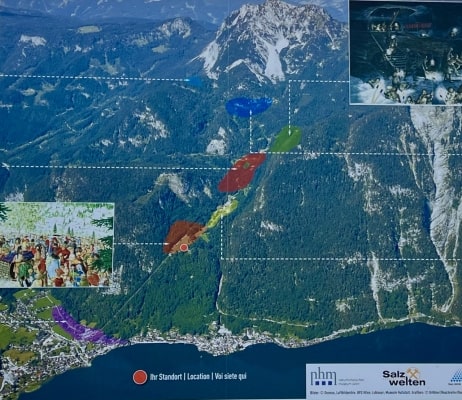 Entrance to Salzwellen (the salt mine) is here on top of Hallstatt. This is March, very off-season, so last chance to visit the mine is 14.30. And as getting out of Salzburg took (considerably) longer than planned, it’s now too late in the day.

PS: Saltwellen Hallstatt also offers a special prehistoric expedition every Friday that sounds really interesting. (Reservations are required. Also, it takes several hours; you need to be in good shape and not be claustrophobic).

Down in the village

Time for a look at Hallstatt. This enchanting village by the Hallstättersee (Lake Hallstatt), surrounded with the Dachstein mountains, usually features high on the list of the world’s most photogenic places. There’s also a full-scale replica of Hallstatt in China’s Guangdong province.

Here’s a somewhat unsettling statistic: About 800 people live in the village. On a busy day, more than 10,000 visitors stop by. In one day!

Fortunately, this is off-season. So nowhere near 10,000 here today. But we’re not exactly alone. It’s a lovely, sunny day – and a Sunday to boot. Let’s follow the crowd into the little village.

Hm… perhaps crowd is a bit exaggerated. Let’s say an assembled multitude, wandering in the same direction. Well, at least we know where to go then. With my (lack of) navigational skills, that is not always a given. 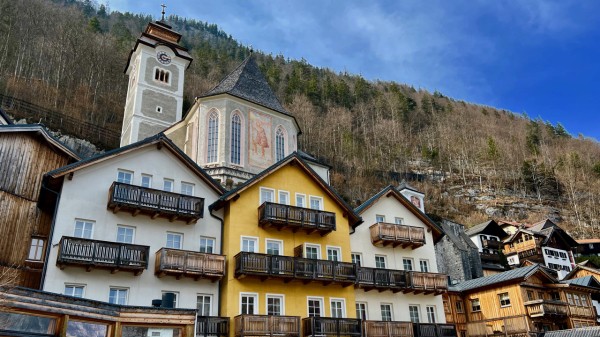 Charming Alpine houses along the hillsides – 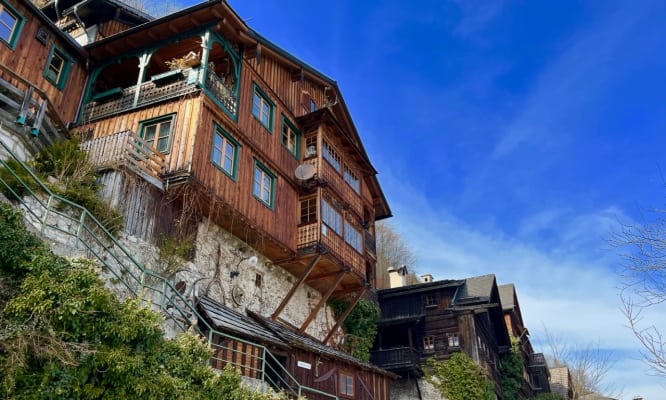 – and the Marktplatz (Market Square), lined with busy cafes 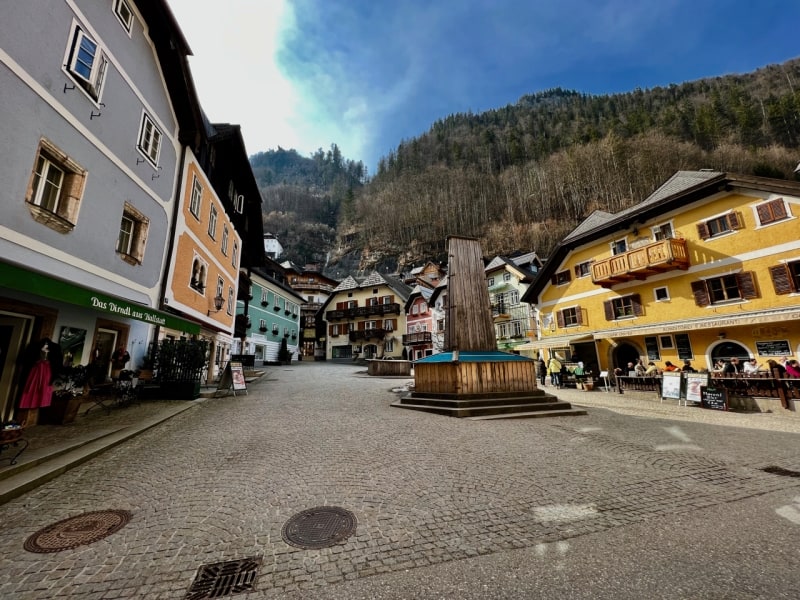 I’m rather drawn to this 150-year-old family-run guesthouse. And no, I didn’t stay here, just asked questions, since I’m nosy. But judging by that door alone, I would stay here. 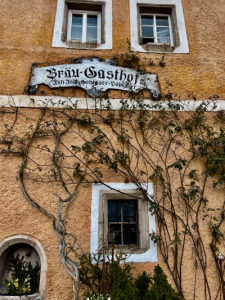 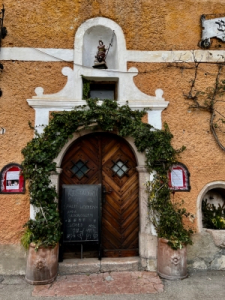 As always, remember to look up. 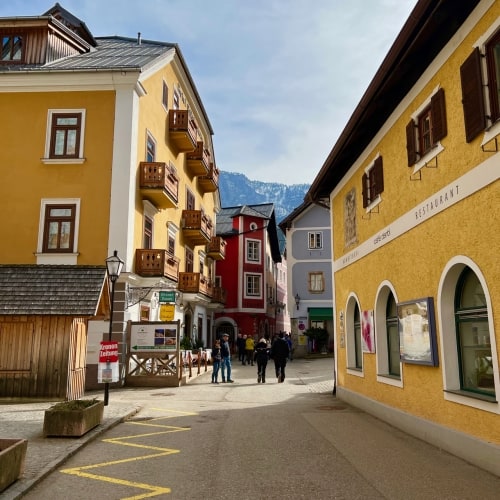 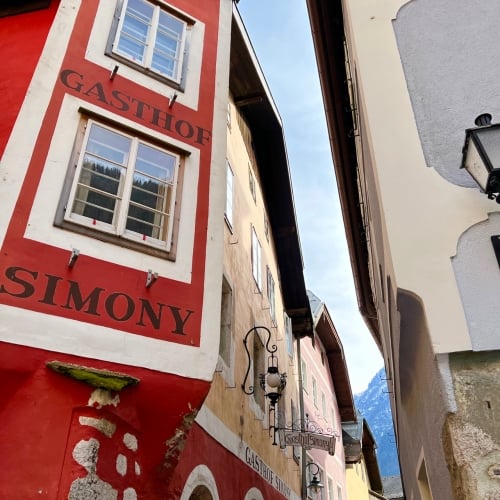 Hallstatt World Heritage Museum, showcasing the 7,000 years of human history, closes at 15.00 in winter. Another miss for us there, imaginary travel mate. But at least I got a good look at the prehistoric wooden staircase outside – a replica of the oldest staircase in Europe. The original one is in the salt mine. Discovered back in 2003, it was found 100 metres below the surface.

And, just like the prehistoric settlements at Moon Lake, the original staircase has been dated using dendrochronology (tree-ring dating). Turns out the staircase is from 1143 BCE. I’m forever impressed with the accuracy and beautiful simplicity of this technique. 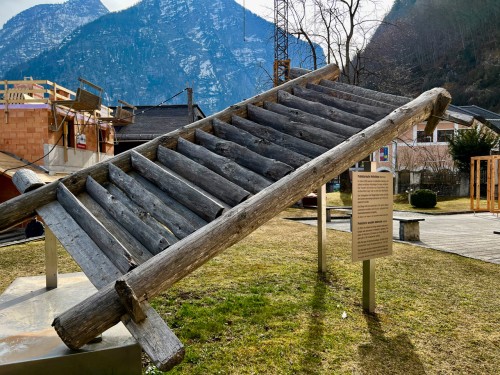 You can take a tour, heaps of them on offer – but do you want to limit yourself to rushing through? Didn’t think so. I recommend using your own transport, though it can be slightly challenging in winter if you’re not used to mountain driving. From Salzburg, it is about a one-hour drive.

There is also a bus that takes twice as long, and a rail service taking even longer, usually involving at least one change of trains. On the plus side, it is one of Austria’s most beautiful train journeys. Also, as the railway station and the village are on opposite sides of the lake, you get a short ferry ride, too.