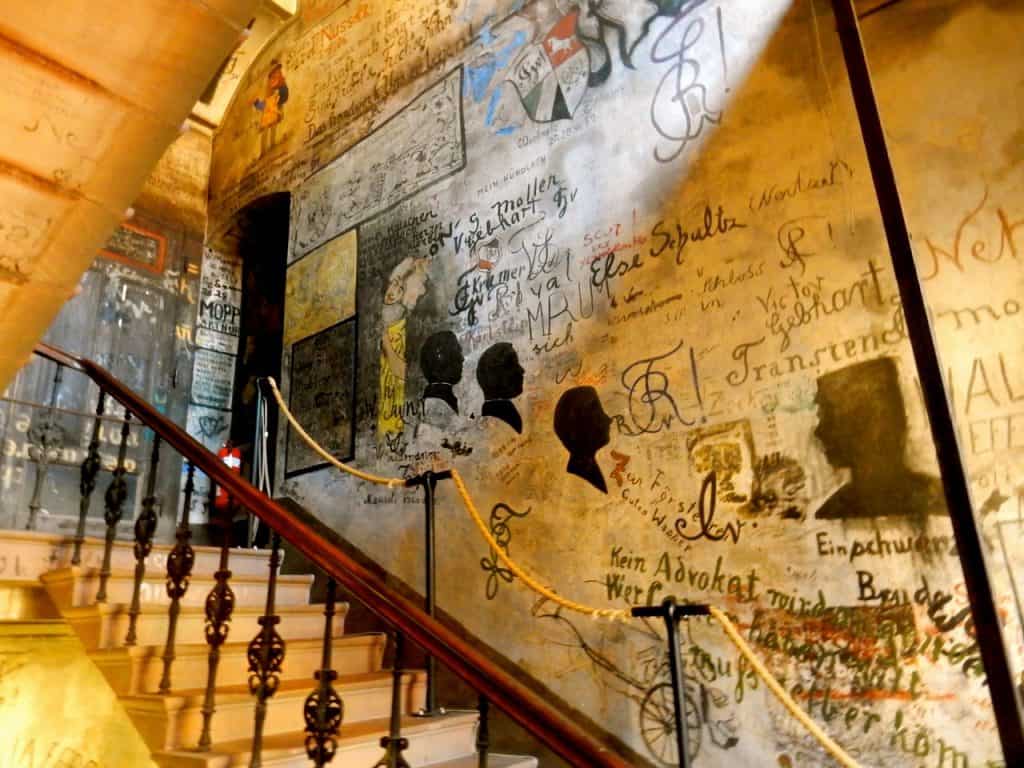 From its foundation in 1386 and until World War I, Heidelberg University had jurisdiction over unruly students. Depending on your misdemeanour, you could land a sentence of anything from 24 hours to 4 weeks in the Studentenkarzer (student lock-up). The most common offences?

… loud singing in the city lanes, inappropriate behaviour in public as a result of inebriation, and participation in illegal fencing duels… knocking a local constable’s cap off with a stick…

Whilst here in the prison, you were allowed to attend classes, as well as decorate the walls with paintings and verse. You could have food and beer brought in from the outside. And as the 19th century waltzed along, things loosened up even more; soon visitors were allowed in the prison. Can you imagine the parties! 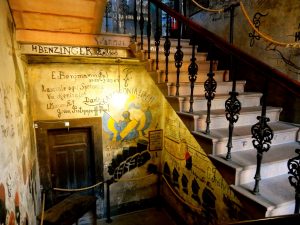 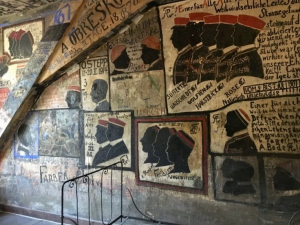 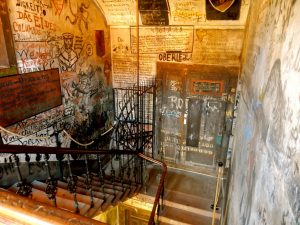 Walking up the stairs, I spot the name Sophie written in large, bold letters. I’m curious. According to Heidelberg University’s chronology, the first woman was admitted in April 1900. Considering the black cats surrounding her name, our Sophie might have bewitched a fresh-faced young student or two. But I like to think of her as a student herself, getting up to mischief. 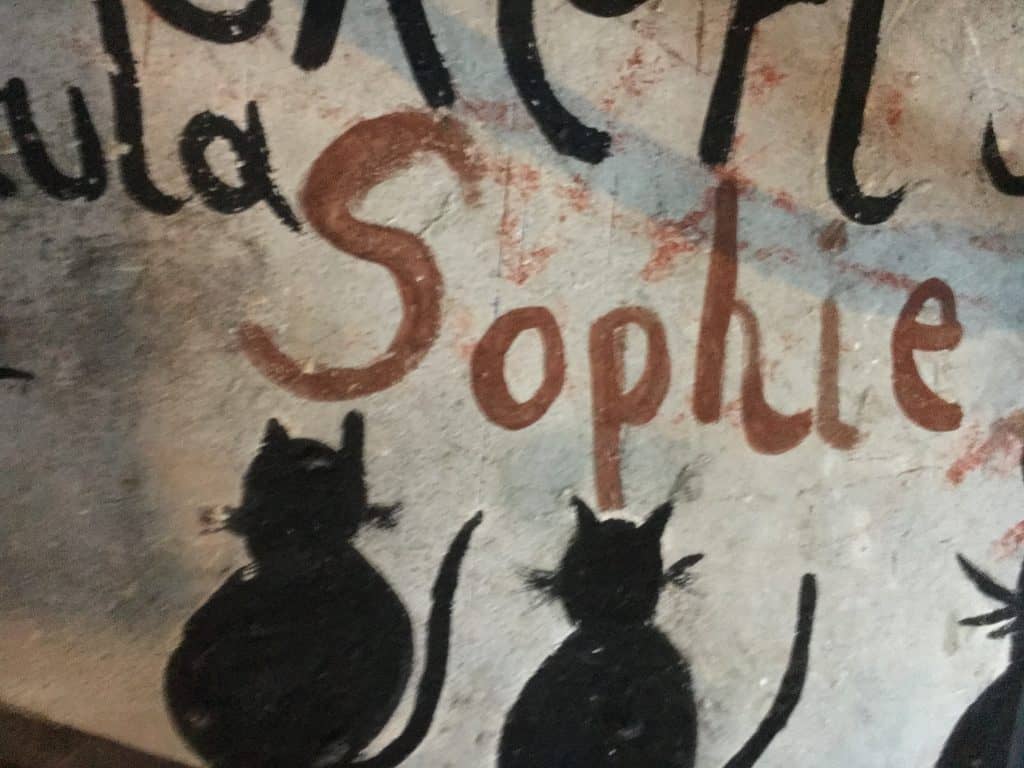 Students named the cells Sanssouci, Palais Royale and Solitude; all of them rather spacious and containing a table, chairs and a hard bed with a straw mattress. But the prisoners could have their own pillows and duvets brought in. Of course.

It all looks rather cosy and I shouldn’t mind spending a night or two here myself. All in the name of research, you understand. Now, what should be my crime, I wonder? I like the fencing bit. Or perhaps I’d disrespect authorities; I often do anyway. 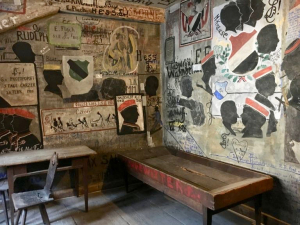 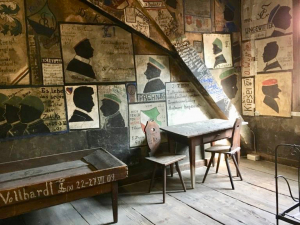 Apparently, I’m not the only one to feel that way. During the 19th century, it was something of an honour for students to do a stint here. Many would actively seek out punishment.

A Tramp Abroad on the Heidelberg student prison

Mark Twain attended Heidelberg Universty for a few months in 1878, in the student prison’s heyday. Remember his take on learning the German language in A Tramp Abroad, Appendix B? In Appendix C, Twain describes the lock-up in amusing detail. Here’s how he understood the workings of the karzer:

So on Friday the student goes to the prison of his own accord, and is admitted. (Enjoying this deliciously P.G.Wodehouse-esque description? Then read the rest of Appendix C over at Mark Twain in Heidelberg). 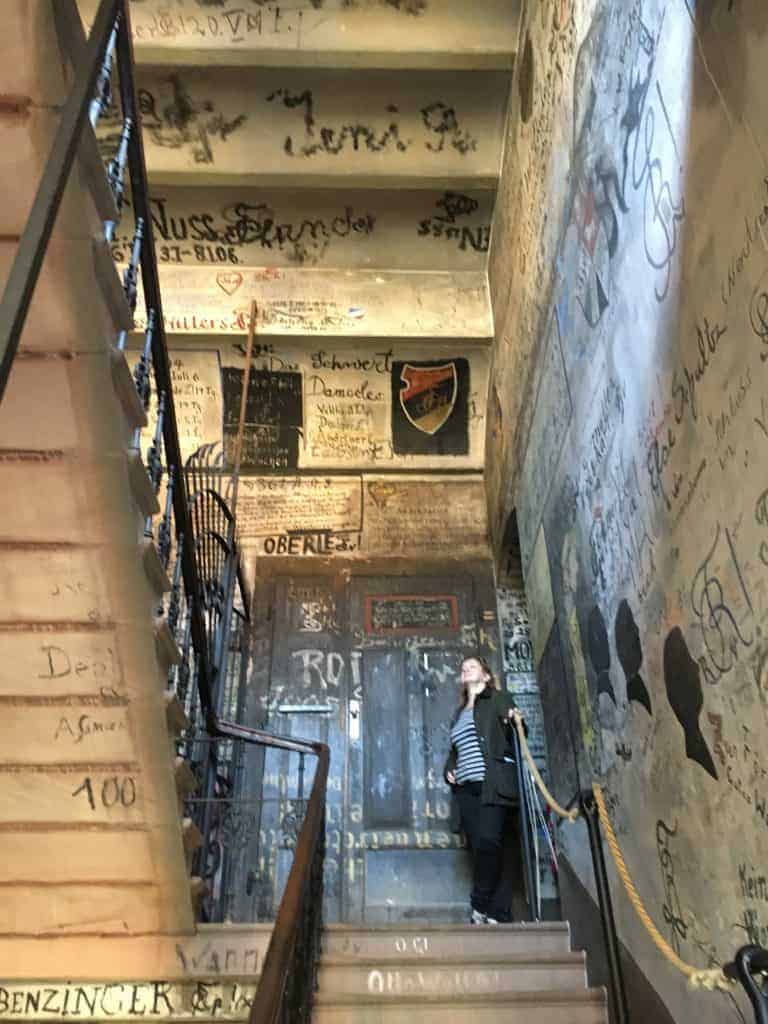 World at a Glance is a series of short articles here on Sophie’s World, portraying curious, evocative, happy, sad or wondrous, unexpected little encounters – with a single photo. Well, normally, but not today. I tried, but I liked them all. Sorry. Not sorry.

Disclosure: I stumbled upon this wonderful, well-preserved student prison when on a road trip as part of the campaign #Luthercountry, created by iambassador in cooperation with the German tourist office. Any opinion is mine, all mine, As always, as ever.