Only 4 more weeks until this strange, ominous year will become history, and not a moment too soon. If you’re like us, you’re more than ready to get back on the road. Any road. But healthy would be a bonus, wouldn’t it? Just now, healthy sounds right. Feels right. Healthy – and outdoors. Using our muscles. Breathe fresh air.

So I thought I’d tell you about a road that is really more of a path, a stony path up a mountain side. And a day of summery alpine hiking. In Norway. Because we know it well.

Here’s a beautiful day hike a few hours from Oslo. And it’s not too terribly demanding, so you can bring the little ones along if you’d like. 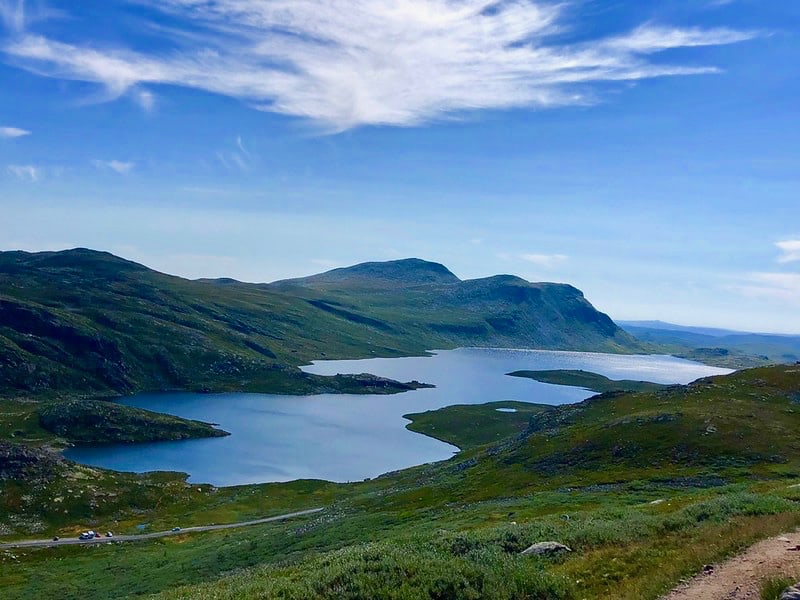 Known as Norway’s loveliest mountain, Gaustatoppen rises above Rjukan in Telemark. If the name Telemark sounds familiar, you may have heard of (or seen) the film The Heroes of Telemark (UK, 1965), or you may know Telemarkskjøring (Telemark skiing).

From the top, on a clear day, you can see 1/6 of the entire country. Now, you may think Norway is small, and it is – in terms of people. Fewer than 6 million of us. But those 6 million, you see, have a whopping 385,000 km2 to play with, meaning we’re not even 15 per square kilometre. (Here’s a map of population density around the world, if you’re into stats. And why wouldn’t you be.)

From the top of Gaustatoppen then, you could be looking out at 64,000 km2 all at once; that’s like taking in all of Latvia at a glance, a pretty decent chunk of landscape.

Starting out at the car park at Stavsro, you’re already 1,100 metres above sea level. The mountain is 1,883 metres, so you’re looking at a 700-metre altitude difference. The incline is steep, especially the last few kilometres, but not too bad. If you are fairly active and used to walking, it’s very doable. I’d say it’s on par with hiking Pulpit Rock; medium strenuous. 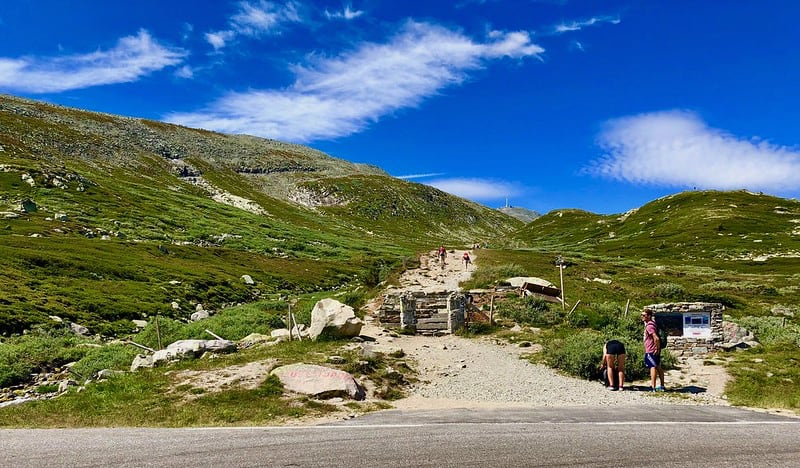 The path starts here: across the road from Stavsro car park

The path is wide, rugged and mostly rocky. It’s clearly signposted with the characteristic red T, which guides you all around the Norwegian landscape, most often painted on rocks. 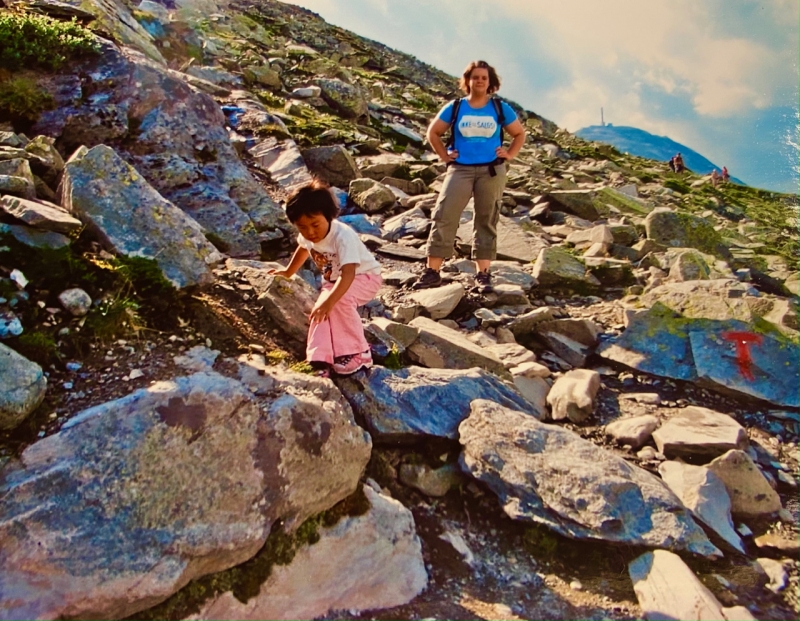 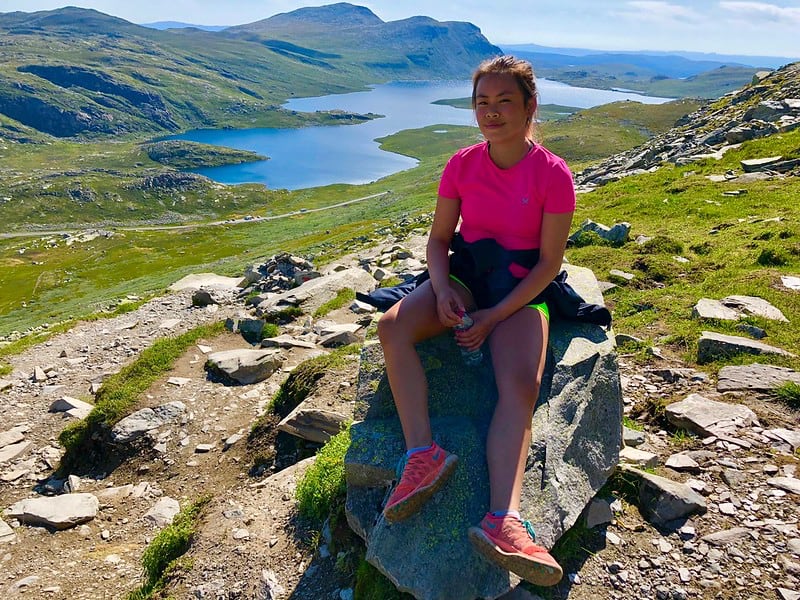 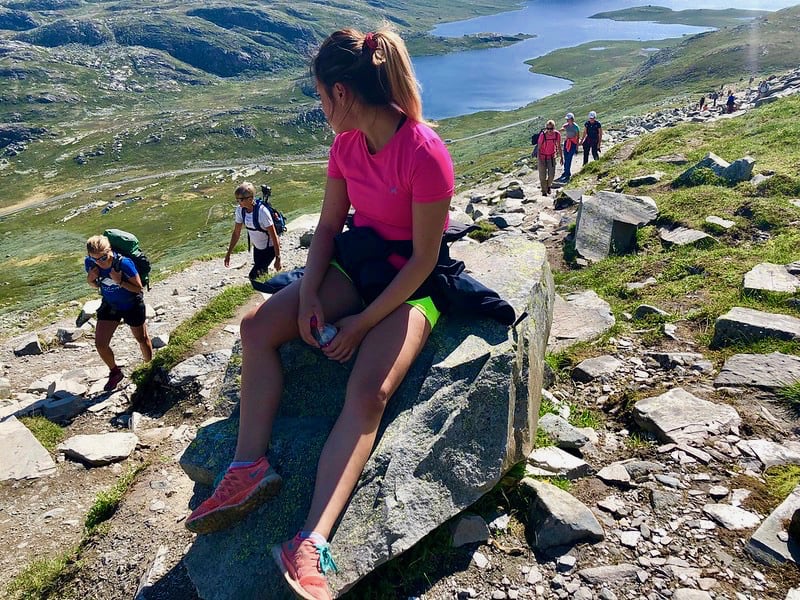 A brief stop on the way to enjoy the view – 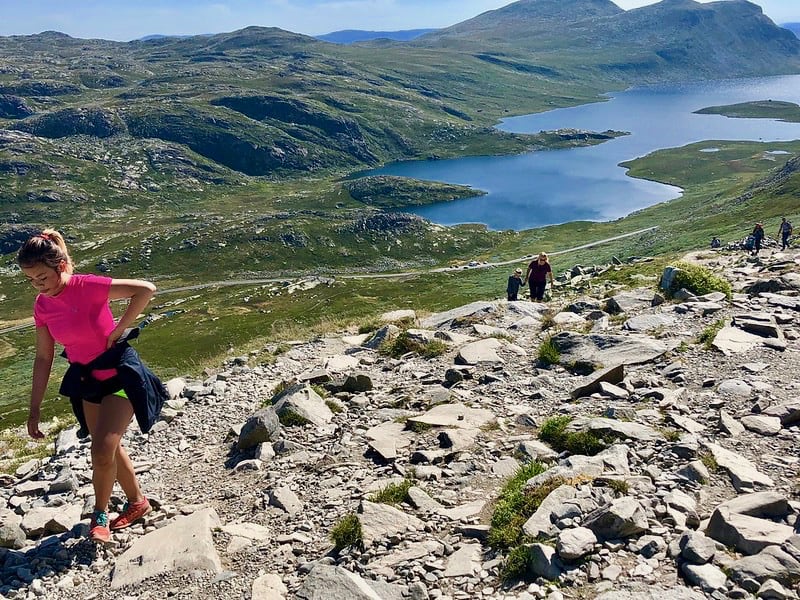 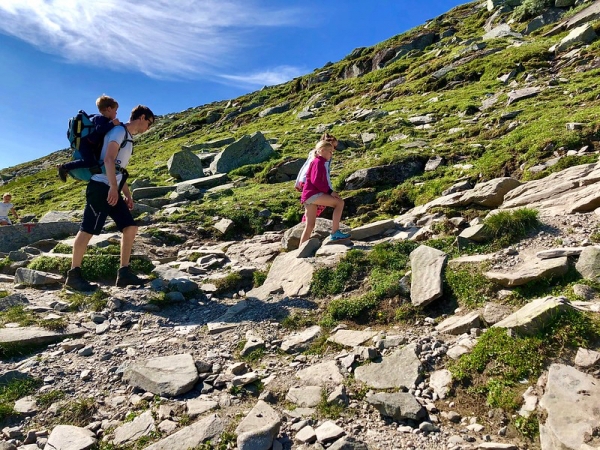 The smallest amongst us is better off in a backpack, most of the way

We’re 1.5 km from the top here. This is the steepest part of the climb, so dig out those mental reserves for the remaining bit. 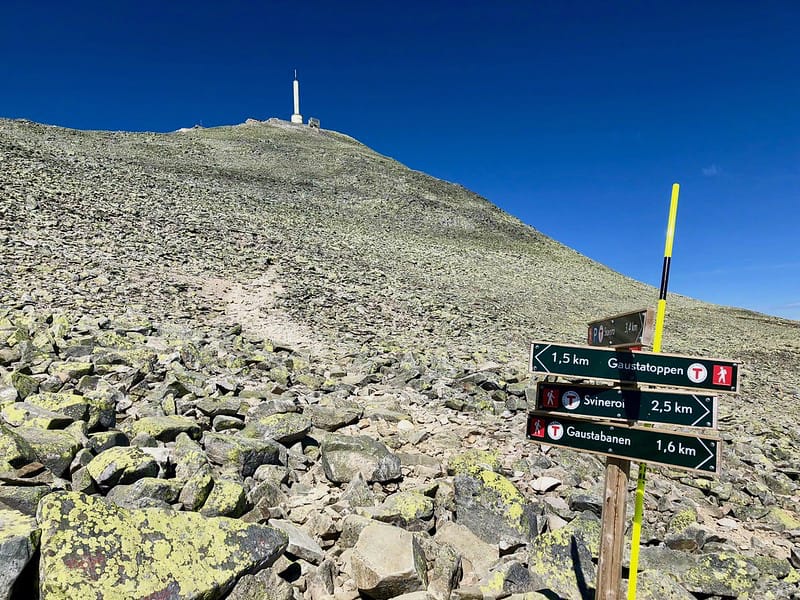 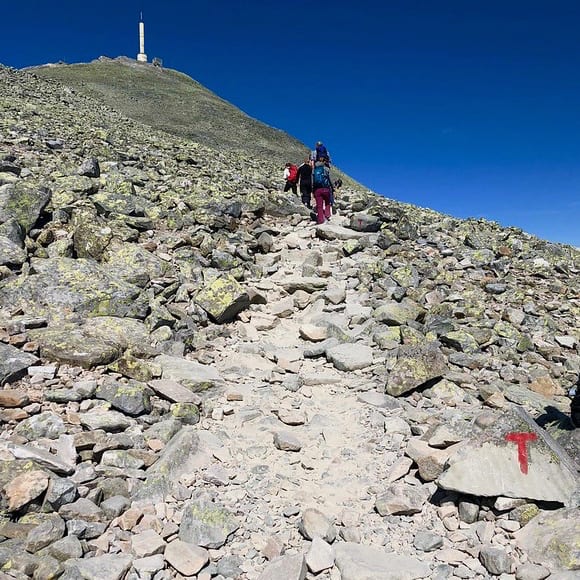 Spot the T here as well? T stands for Turistforeningen, the Norwegian Trekking Association. Or – if your name begins with T, by all means, take it personally. I would! The track is calling you. Come hither. Let the mountain seduce you.

Nearing the top, the view seems to get better with every step. Also, that’s a handy excuse to stop, turn around and snap photos – or just breathe. At the very summit, you have 360° views. On that clear day, you can see all the way to Oslo in the east, and the Hardangervidda Plateau to the west. 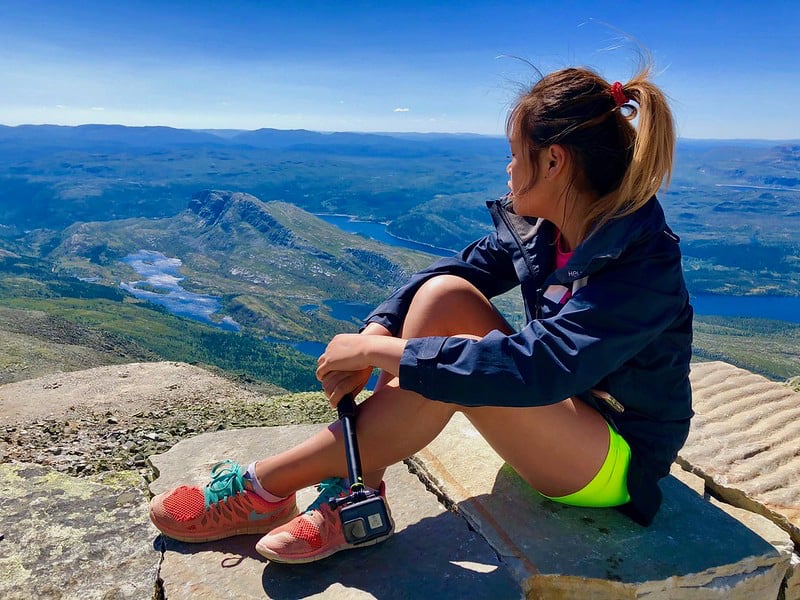 Someone runs ahead, and is sat waiting for mum at the top. 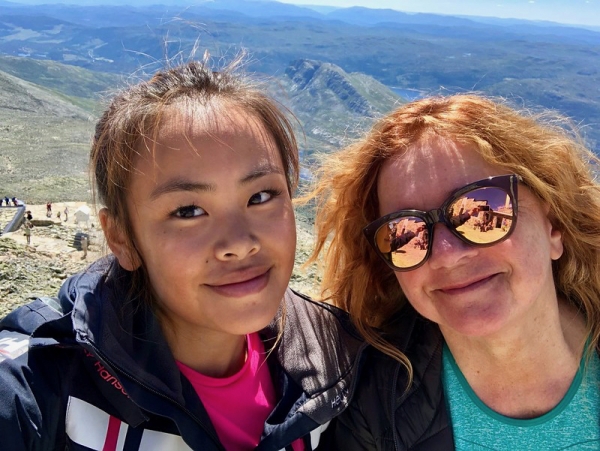 Here’s our route on a nifty fatmap:

We sit on top for a bit, enjoying the views of the landscape – and also of folks climbing those last few kilometres, feeling pretty pleased with ourselves, and deserving of a snack. 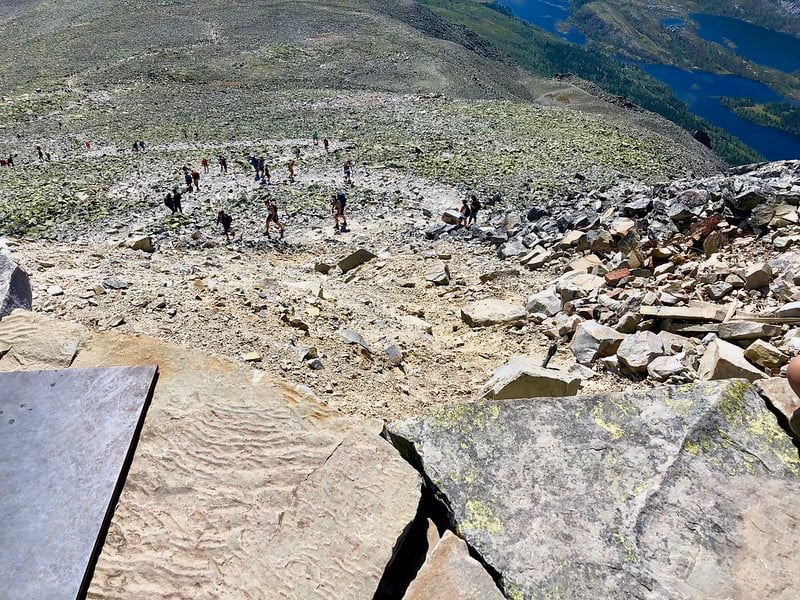 Been there today, done that today

At the summit, you’ll find Gaustatoppen turisthytte, a stone cottage, built in 1893, using local materials. As you’ve seen by now, there are plenty of stones around.

Try a waffle in the cafe, it’s as Norwegian as it gets. In fact, this cafe sells more waffles than any other place in Norway. 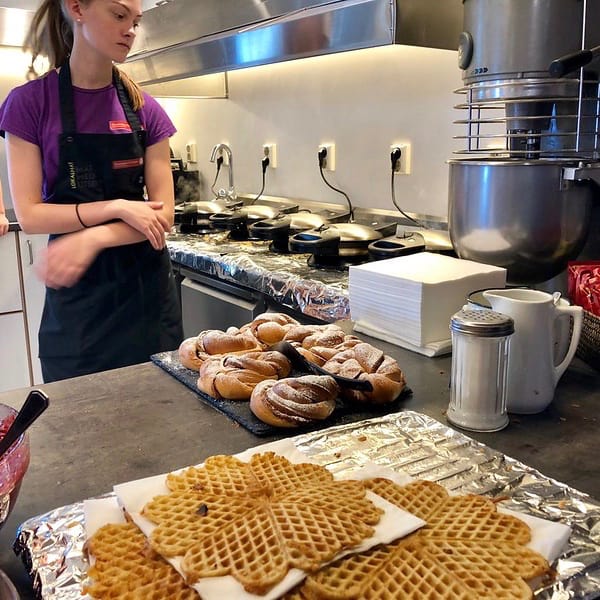 Coming down the mountain

So, you’ve had a well-earned waffle and coffee, or maybe a beer. Are you ready to walk back down those rocky slopes?

Well, luck is on your side!

Perhaps you’ve noticed a few people at the summit here, with canes or even walkers, and wondered how in the world they managed the climb?

Instead, they took a cable railway. Inside the mountain! And you can, too.

Gaustabanen was built by the military and completed in 1959. The railway was originally meant for tourists, but as this was during the Cold War, NATO took over, and used it for access to the top secret radio relay station inside the mountain. 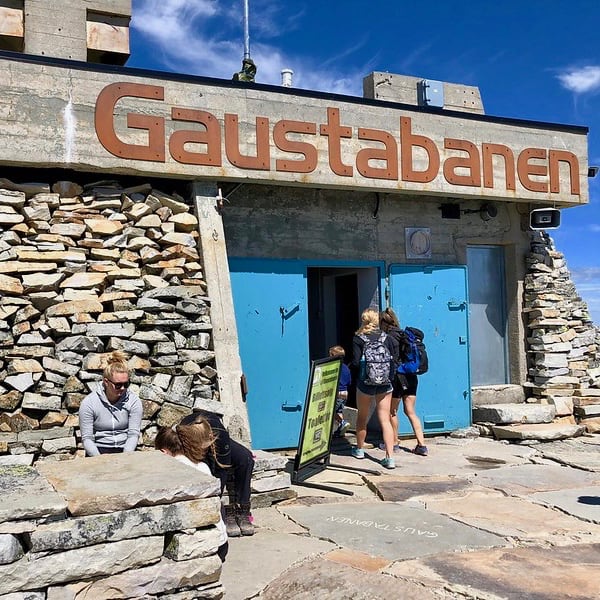 When we were here in 2006, the cable rail wasn’t an option. By 2018, it had opened for commercial operations. Cat and I took it going down, an interesting experience in itself. And easy on the knees.

There is no shame in turning back!

Fjellvettreglene (The Mountain Code) is a set of common sense rules to follow when you’re in the mountains. The code is probably more familiar to Norwegians than the Biblical 10 commandments. Here it is, translated to English, just for you:

For even more details and specifics, VisitNorway has got you covered here.