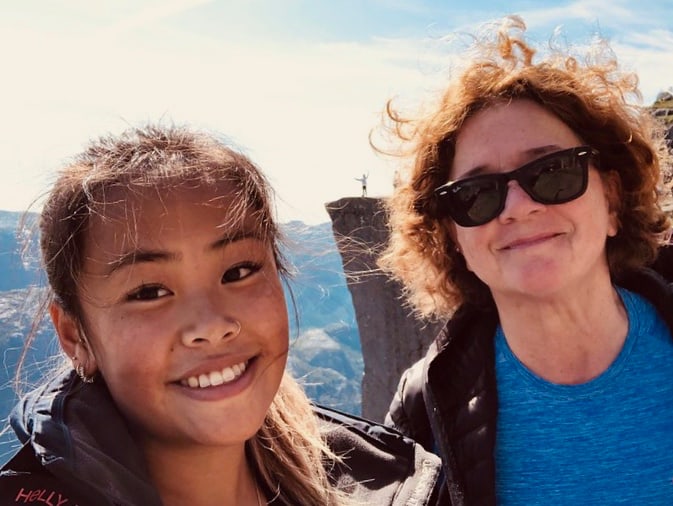 Norway has stunning nature. I say that entirely objectively (ok, not really. But still!) Excellent hikes abound just about everywhere you turn, all around the country. You’ll also find some iconic rock formations. The three most famous in the south-western part of the country include:

Last summer, Catarina and I hiked Pulpit Rock. At 7.6 km round-trip, it’s the shortest hike of the three, and should take about 4-5 hours depending upon how long you want to spend on that deliciously dizzying plateau you see behind us there. With this summer probably being spent in-country (corona and all that), we’ll take on one of the other two. I’ll keep y’all posted over on Instagram.

We live in Eastern Norway, so getting to Pulpit Rock means a 7-hour drive to Stavanger, to spend the night. There are several road options (more info at the end of the post). We choose the Haukelifjell Pass, mostly because it’s such a lovely drive. This mountain road is chock-a-bloc with beauty spots, so count on more than the allotted 7 hours, as you’ll want frequent photo stops. You may even want to stop to stretch your legs properly and go for a hike – or take a dip in one of the mountain lakes along the way. (I’ve written about some Northern Norway road trips here. I’ll tell you more about road trips in the southern part soon). 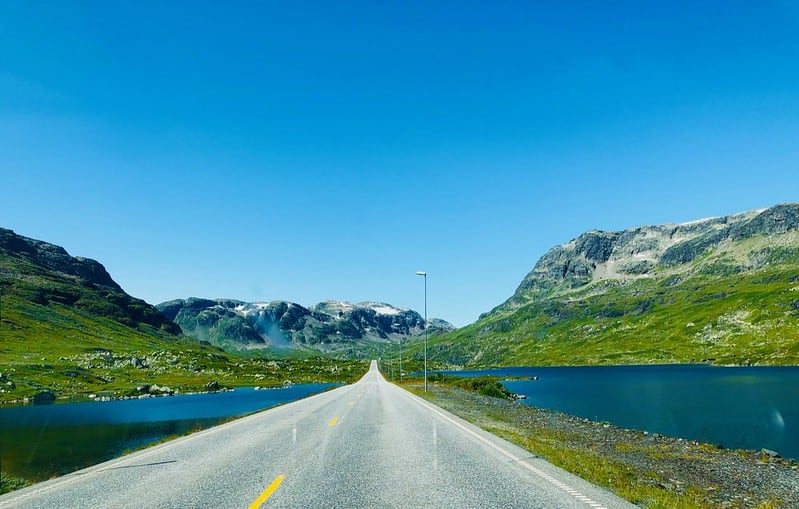 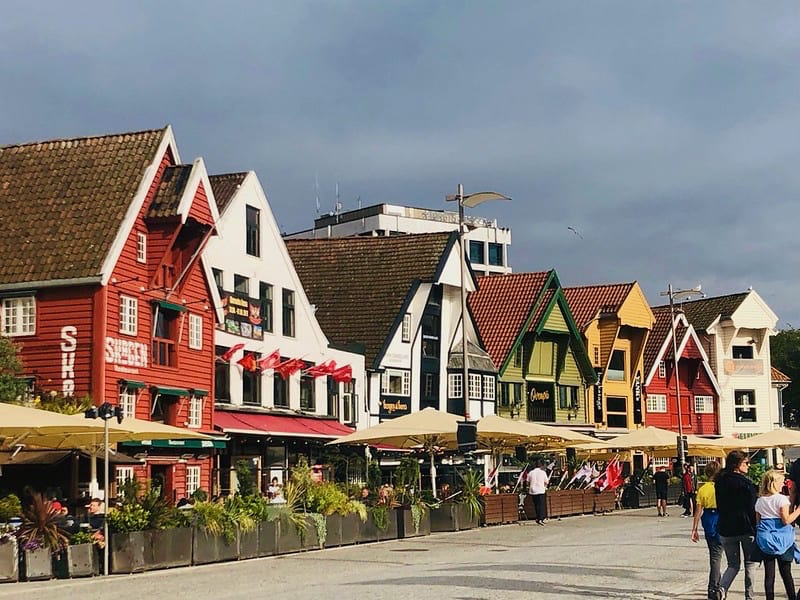 Arriving in Stavanger around dinner time, we’re sorry we won’t be staying an extra day in this colourful oil boom town. (I should probably write more about Stavanger, too.) 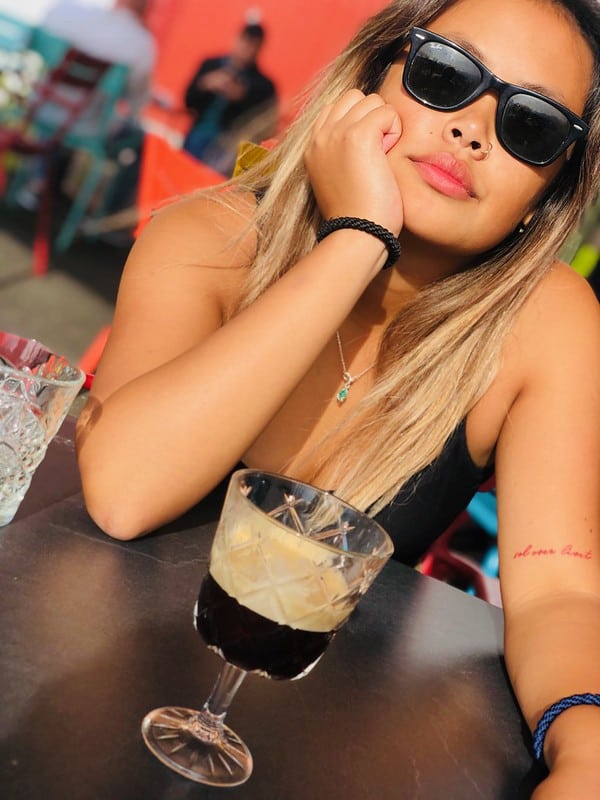 Bright and early the next morning (around 0900, I have an 18-year-old along after all), we drive the car onto the Stavanger – Tau ferry, then continue to Preikestolhytta Mountain Lodge. This was August 2019. The ferry has since been replaced with a subsea tunnel – the longest (14.9 km), as well as the deepest (292 metres below sea level), underwater tunnel in the world. The 39-km trip from Stavanger now takes a mere 39 minutes. We park at the lodge, fill up the water bottles and join the queue for the loos (none along the way). Soon after, we’re on our way. I mentioned above that Pulpit Rock is the shortest of the three iconic hikes. It is also the easiest of them, though that doesn’t mean it’s necessarily easy. Both DNT (The Norwegian Trekking Association) and VisitNorway grade it at a challenging effort level. But fear not. Just give yourself time, take breaks, and don’t pay attention to those that fly past. The path starts at 270 metres above sea level and ends at 604. That’s a pretty steep 334-metre ascent, which is most noticeable in the beginning. Although sherpas from Nepal have built stone steps and widened the paths, the terrain is rugged. Much of it is nature in the raw. 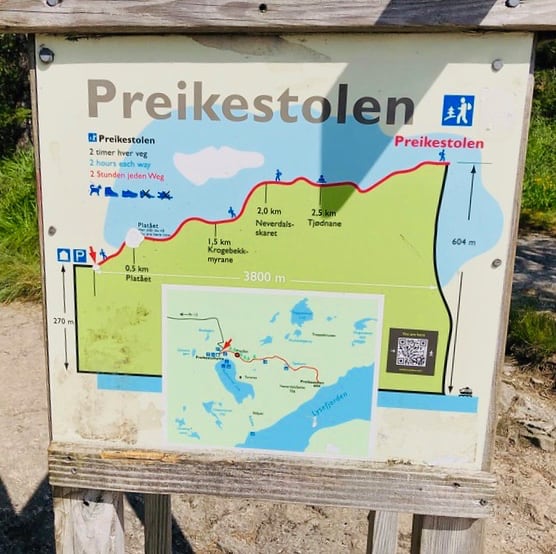 That said, we meet people of all ages; quite a few sprightly 80-somethings, kids of all ages, a mother carrying an infant in a baby carrier, people taking their dogs along… 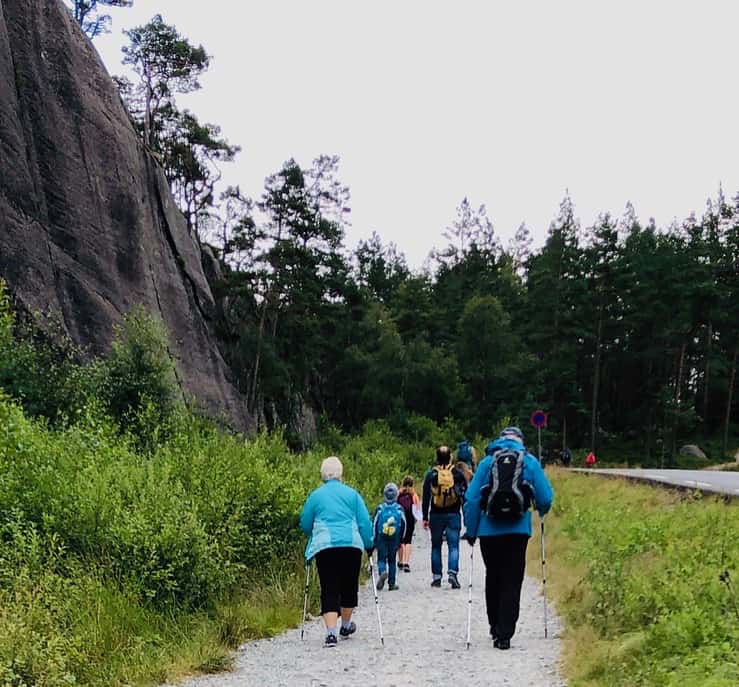 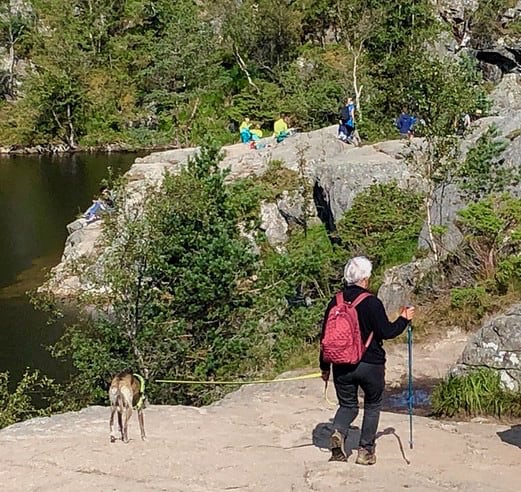 All along the route, you’ll notice red Ts, often painted on rocks. The route is obvious, so you can’t really go wrong, but if you’re ever in doubt, follow the red T. There are also signs along the way showing the remaining distance to the plateau and back to the car park. 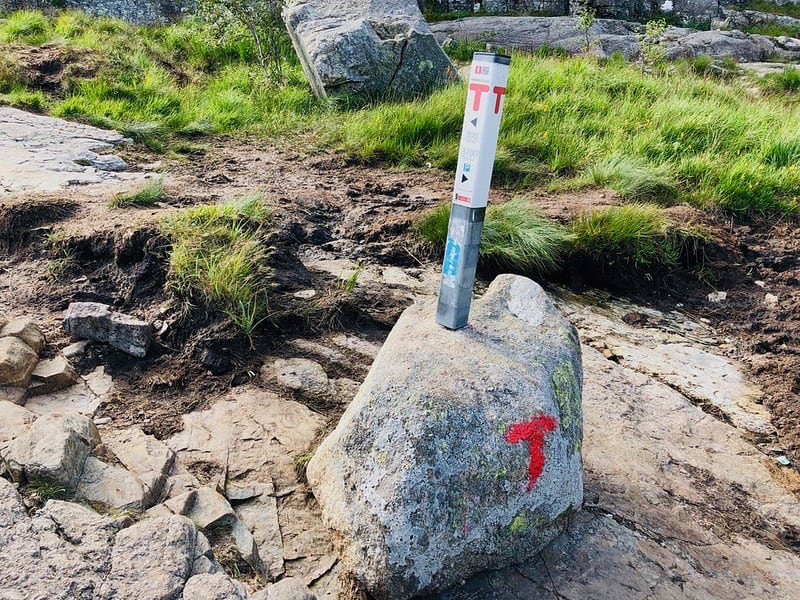 At first, the path starts off as a steep, rocky incline with fairly high steps. Now, my 18-year-old is just back from an exchange year in Australia. Cat has been surfing practically every day, but it turns out those Aussies drive almost as much as Americans. As a consequence, she’s in her worst shape ever. Which is still pretty good. But going up, I have to stop and wait for her more than once. Win! (Coming back down is another story. My left knee is still tricky after tripping during a little hike in Kyrgyzstan 4 years ago). The ground varies greatly: rocky climbs, stairs, flat land, mountain sides. In places, boardwalks have been put up to save us from walking across marshland and get wet. 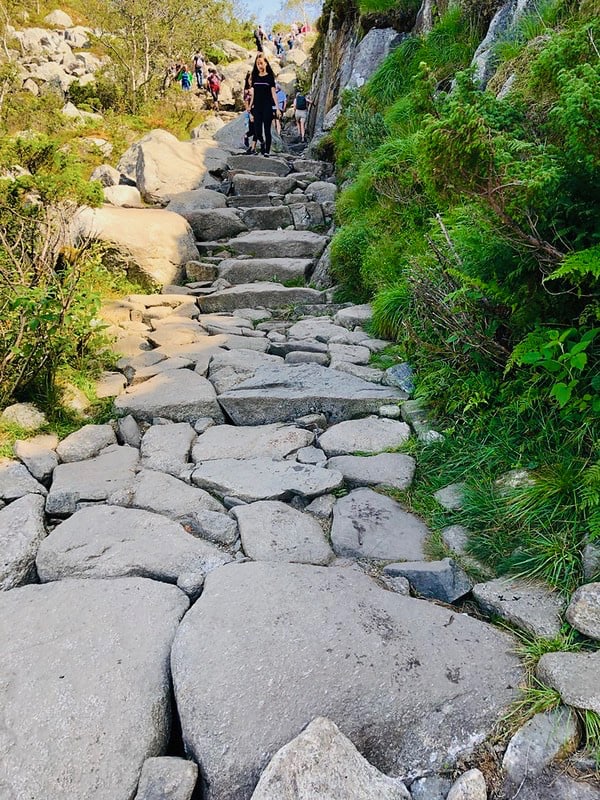 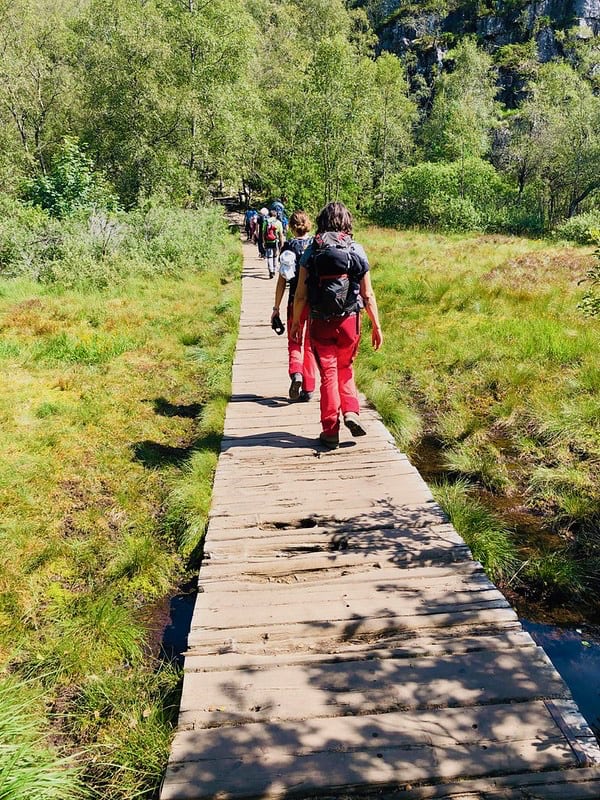 Parts of the way, there are handrails to hold onto. But the path isn’t really dangerous anywhere, except out on the plateau. There your life is in your own hands (as it should be). 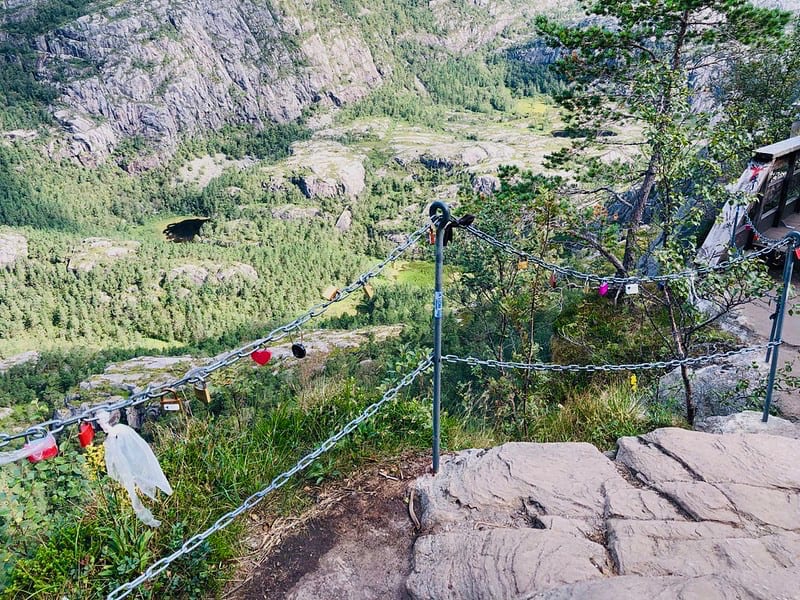 There are plenty of beauty spots along the way to stop and gawk at. 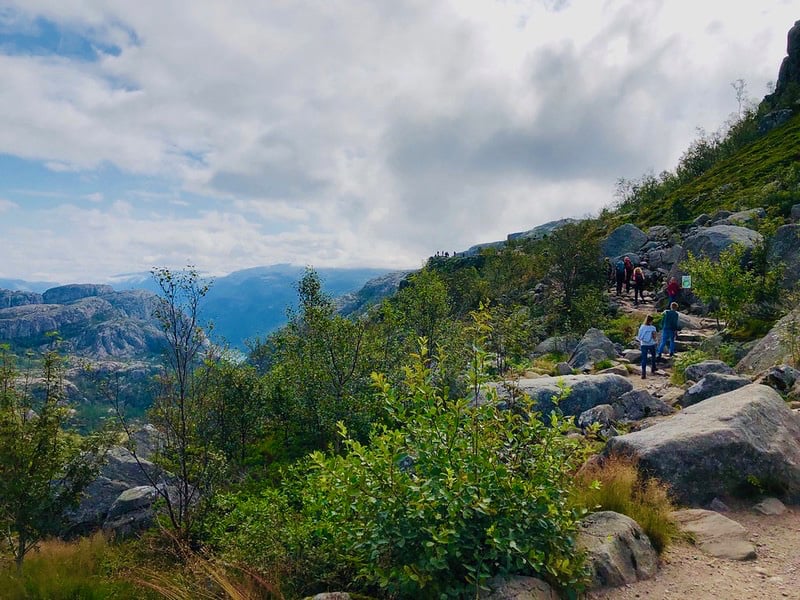 First sight of the plateau. 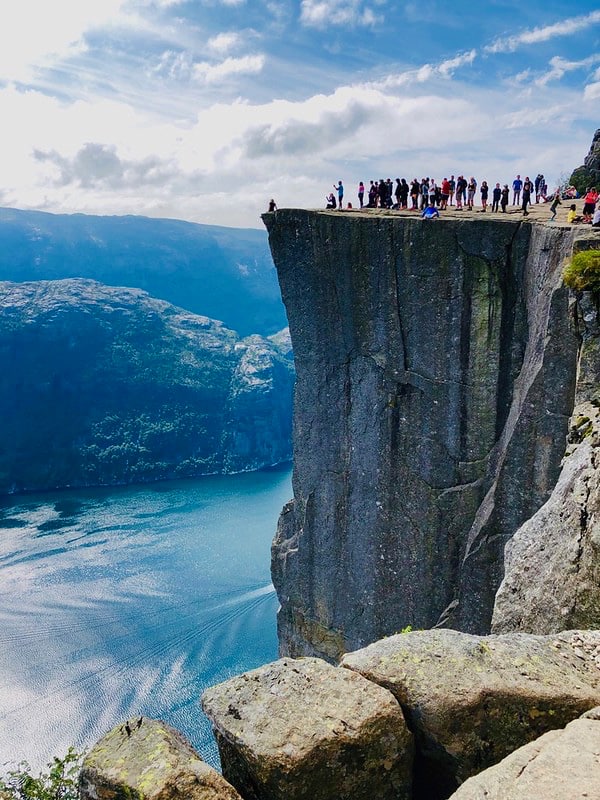 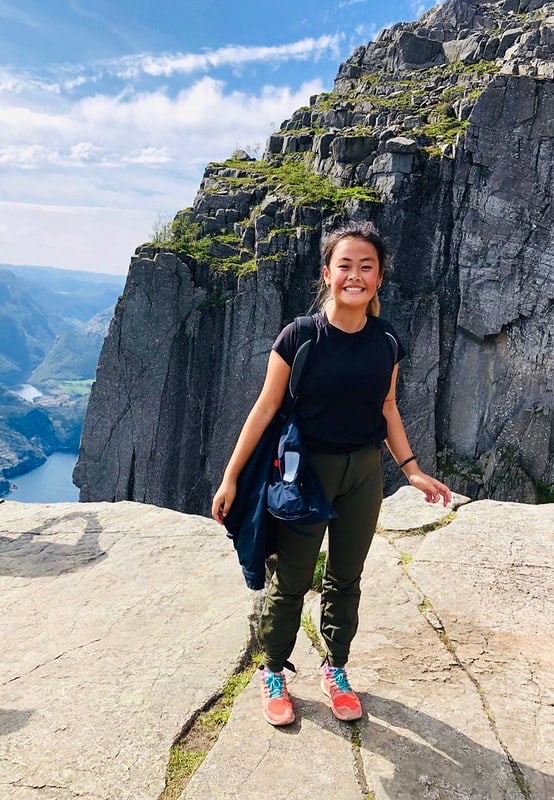 The plateau is about 25 x 25 metres, and has been a well-known marker for travellers for centuries. 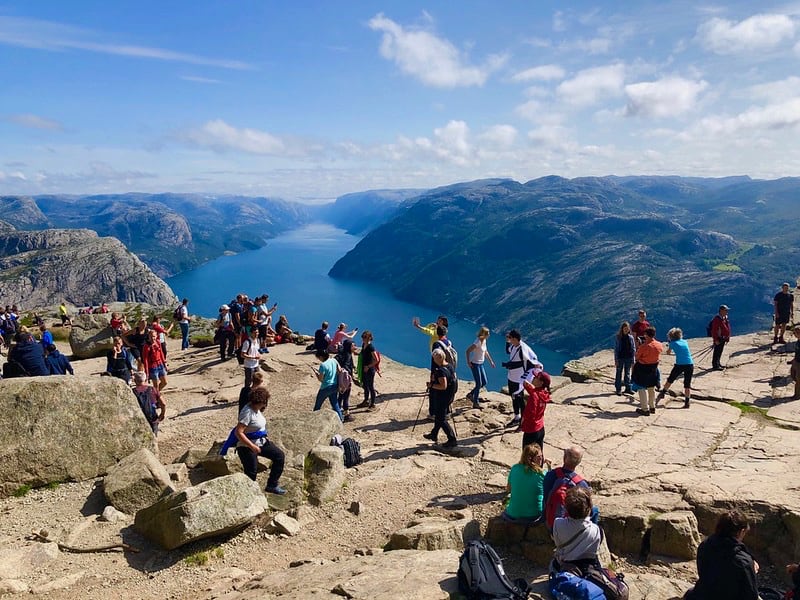 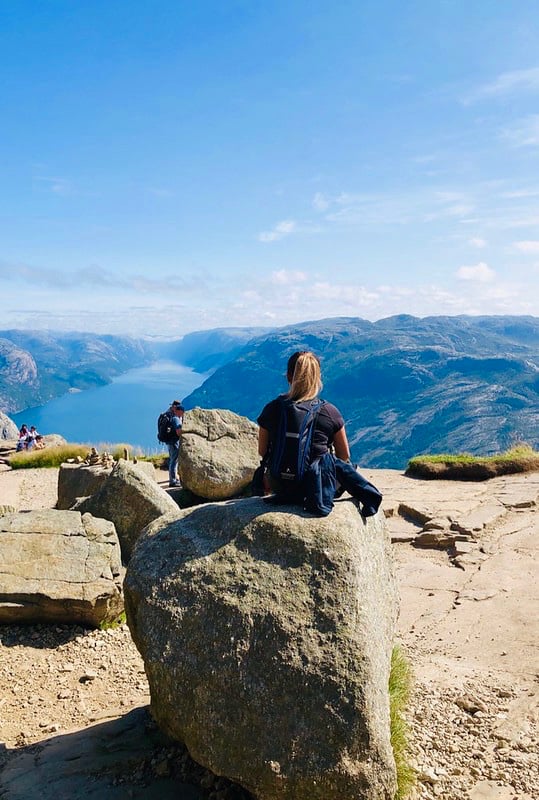 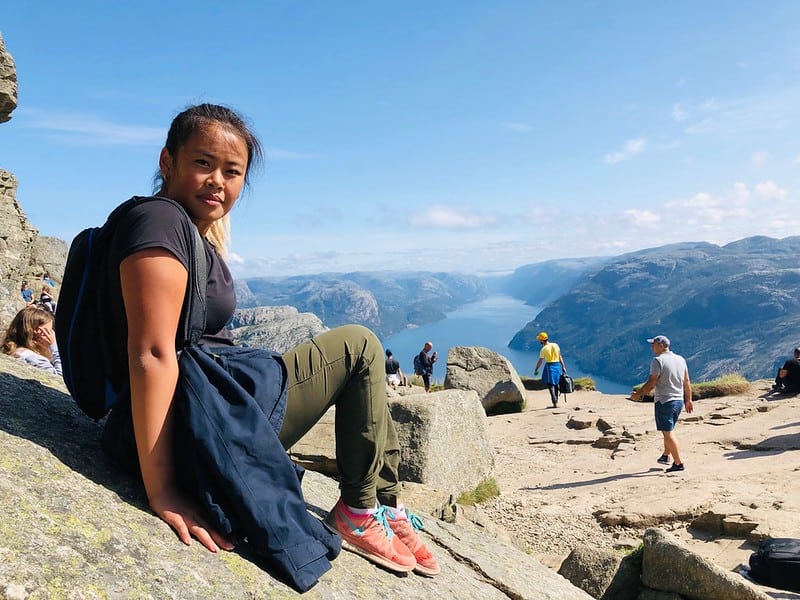 – and a chance to get some sun on our faces

We stay up at the plateau for about an hour, nibbling on apples and chocolate – Kvikk Lunsj, of course, THE hiking chocolate –  looking out on Lysefjord far, far below. It’s interesting (and a bit scary) to watch some of the craziest photo models. I also can’t help but think what would happen if one of the dogs accidentally gets off its leash: the tiniest unplanned move, a wee nudge and there you go. I have to say though, it’s worse to watch other people out on the plateau than actually being on it myself. But then, with my slight fear of heights, I kept at least 1 metre between me and the edge, and other people, at all times. Corona style. Some argue the plateau should have a fence. That would mean we’d have to fence off large portions of the country. Mountains don’t work like that. Norway doesn’t work like that. You’re the boss of your own fate. If you’re out in nature, you’d better take good care of it – and of yourself. Of course, an iconic rock like this will seem inviting also to people who have had enough of this life and want to end it in a spectacular fashion.

In 2000, a girl travelled from her home in Austria to go to meet a local guy she knew from an online suicide forum. The two of them had decided their highest wish was to jump off a cliff, and came up here one snowy February night. I guess in their state of mind, they probably didn’t give much thought to the rescue personell risking their lives to bring back the pieces of their lifeless bodies for their parents to bury. 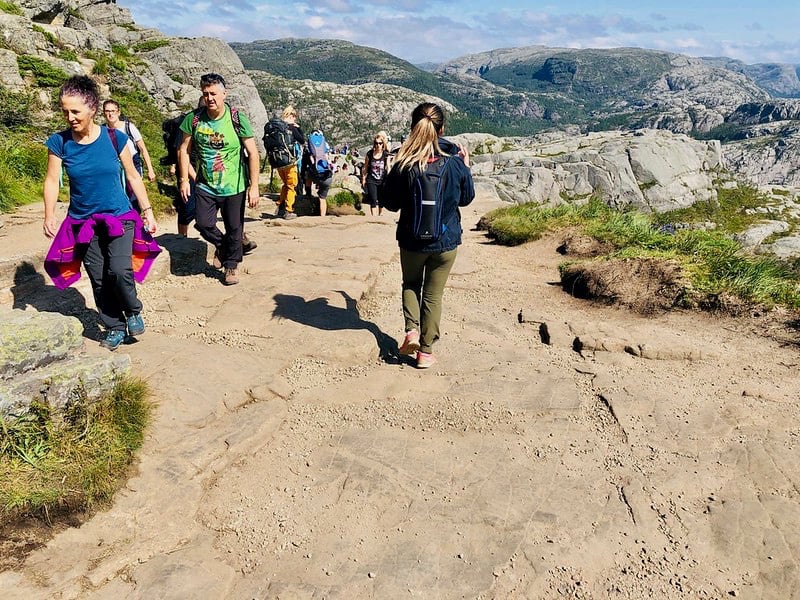 She’ll be coming down the mountain…

Stopping for a final look at the plateau. 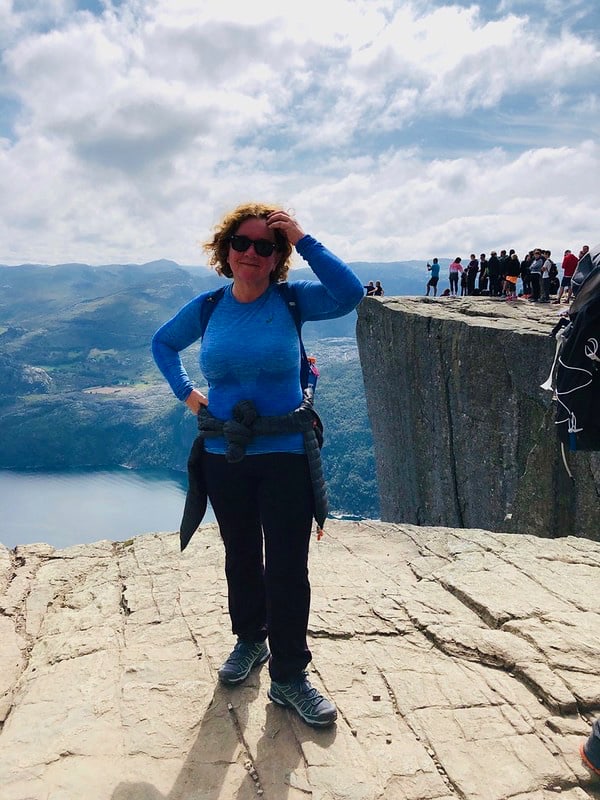 Good thing those people have my elbow to lean on.

The views going back down are just as spectacular. 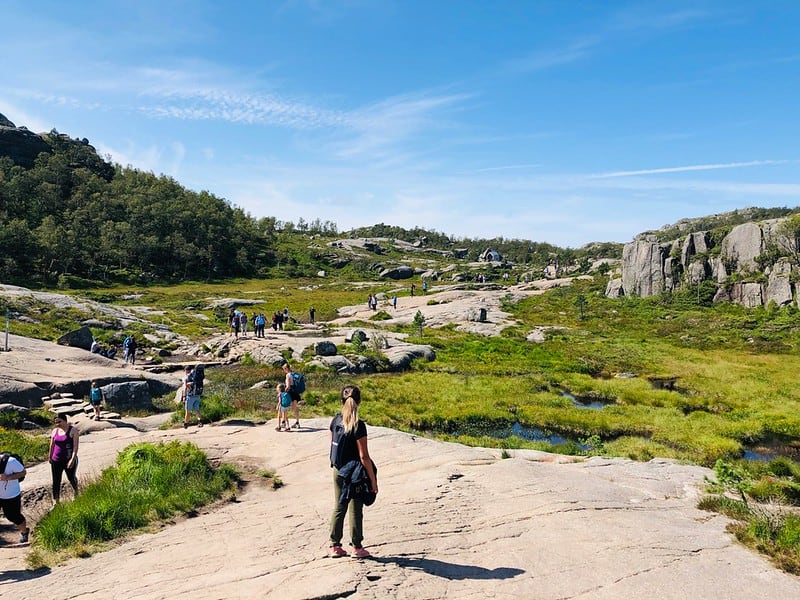 The paths are the same, but seen from another angle, it looks and feels a bit like a different experience. 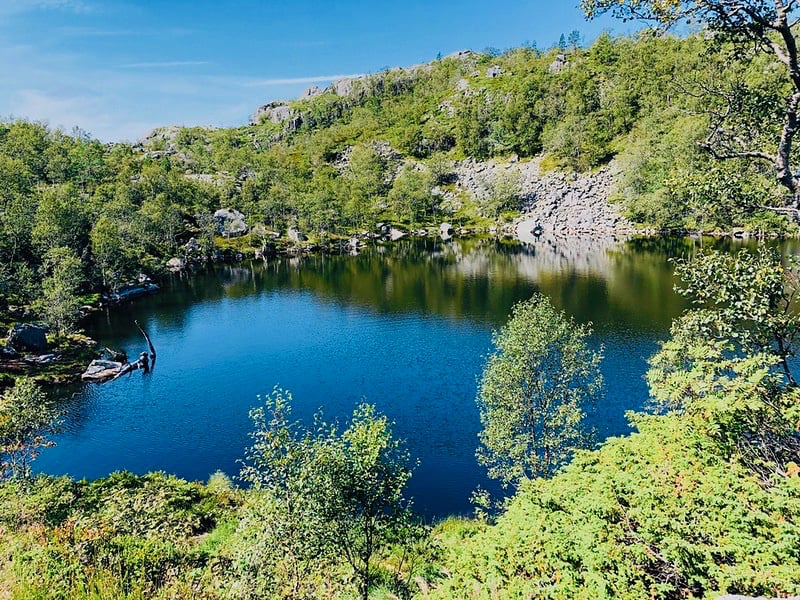 About halfway is this emergency hut, where you can take a break, or go inside if the weather turns inclement. 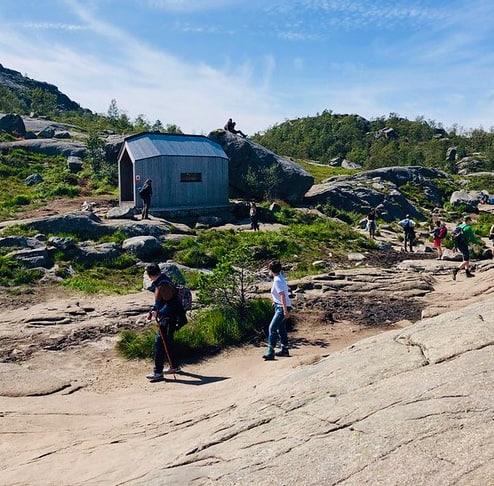 No, this is not a toilet

If you have kids along, it’s nice to stop for a swim break after a hot hike. Remember to bring towels. 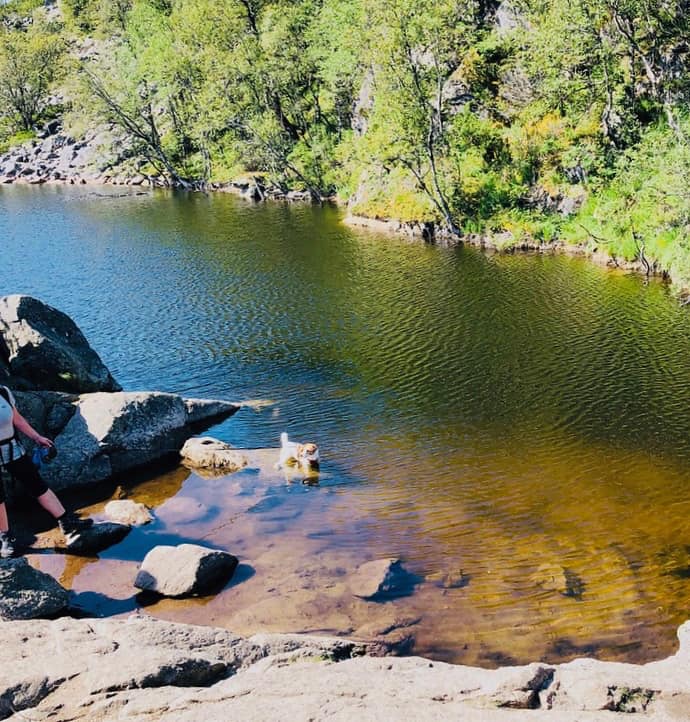 Swimming’s not only for the kiddos, y’know. I like it, too. Woof!

Back down at the lodge, there’s a queue for the loo. On this hot summer day, there’s also a queue to buy ice cold drinks. And food. And ice cream. All well-deserved! Time to get on with the return journey across the country. This time, we take the southern route. We arrive home around midnight, exhausted and very pleased with ourselves. I fall asleep at the exact same second my head hits the pillow. 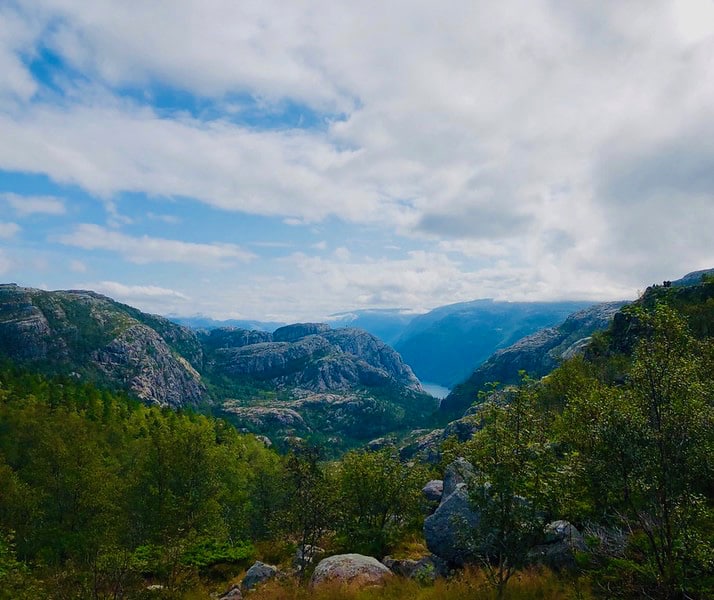 300 000 people visit Pulpit Rock every year. Chances are you’ll bump into some of them, even many of them. Hiking season – well, it’s all year really, but officially April to October, summer being the most popular time. Be aware that cruise ship tourists come ashore for this trip, so unless you enjoy hiking in crowds, you want to start early. Or late – after they’ve gone. A late start at around 16.00-17.00 works well, especially in summer when there’s sunlight until 23.00. Of course, now in corona times, there are neither cruise ships nor international tourists, so you won’t necessarily be in a crowd at any time. My blogging buddy Annette of Nordic Escape fame, popped up to Preikestolen with a friend late afternoon two days ago. They had the place practically to themselves. The blog is in Norwegian, but hop on over anyway, to enjoy very fresh Pulpit pics. (On a side note, I was especially pleased to note the new saunas at Preikestolen Base Camp. I like those little sauna huts on water.)

There is no shame in turning back!

Fjellvettreglene (The Mountain Code) is a set of common sense rules to follow when you’re in the mountains. The code is probably more familiar to Norwegians than the Biblical 10 commandments. Here they are, translated to English, just for you:

(Also, note to self: Mind your knee going down. Especially if you’re going to drive 7 hours immediately afterwards.)

That said: you got this. Enjoy!