How to rent a home in New Zealand

After the Christchurch earthquake, the grassroots movement Blog4NZ was born, aiming to support New Zealand tourism after the earthquake. For 72 hours, travel bloggers from all over the world will tell stories about a country we love. Here’s one of mine:

After I had my youngest daughter, I used the opportunity afforded by Norwegian family law (46 weeks parental leave with full pay) to travel somewhere and stay a while. And so we ended up living in New Zealand for half a year. One early January day in 2003, we left minus 25° C and arrived in Auckland at the height of summer; a wonderful beginning to our little adventure.

Now, where to stay? My oldest daughter, Alex, and I had spent a week in Auckland a few years earlier and liked the big city. However, with a baby, I preferred somewhere smaller and more quiet. Leafing through an old Lonely Planet guide to New Zealand, I noticed a village called Devonport, just 10 minutes from Auckland by boat! It seemed perfect.

Too good to be true, I wondered… Not at all! I’ll always have a soft spot for LP for pointing it out. Devonport turned out to be a charming and lively little village with everything we needed for everyday life and very cool city views across the Hauraki Gulf. And the short ferry ride to Auckland was a treat in itself. Sometimes we’d hop on just for the ride back and forth.

Alex, then 14, was to be a Year 11 student at Takapuna Grammar School. 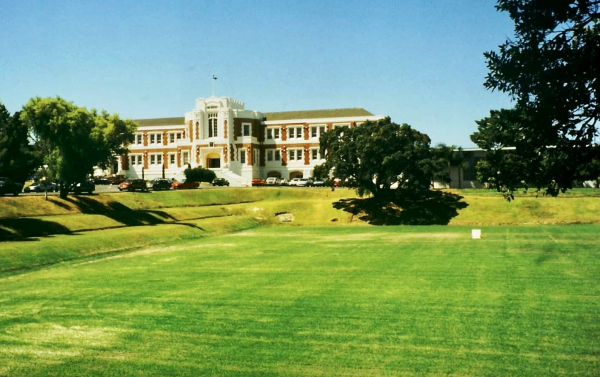 Baby and I would just hang out and play all day. Other than that, no advance planning; I hadn’t even found somewhere for us to live. But these things have a way of sorting themselves out. And they did – although it was a little more difficult than I had anticipated.

How to rent a home in New Zealand – the process

Renting a house or a flat/apartment in New Zealand is a bit different from Norway and the USA. Here’s the gist:

Oh, and rent is calculated pr week, not month.

It was a bit difficult finding somewhere to live, as we arrived right before the America’s Cup. New Zealanders are keen and excellent sailors. Having won the America’s Cup two consecutive years, they were now confident of another win, despite the fact that the captain, Russell Coutts, and half the winning NZ team had abandoned ship, so to speak, to join the competitor Alinghi (from the great seafaring nation Switzerland). Understandably, the locals were a bit miffed. But I digress.

Devonport turned out to be right in the middle of the race course and the village was full of temporary residents (including billionaire sheiks) who paid heaps for accommodations. But after a lot of searching, I found a house that recently had been sold and due to be cut up and shipped to its new owners 2 months later. Problem solved. At least for a time.

This was our backyard – and the undisturbed view through the floor-to-ceiling windows in our sitting room: 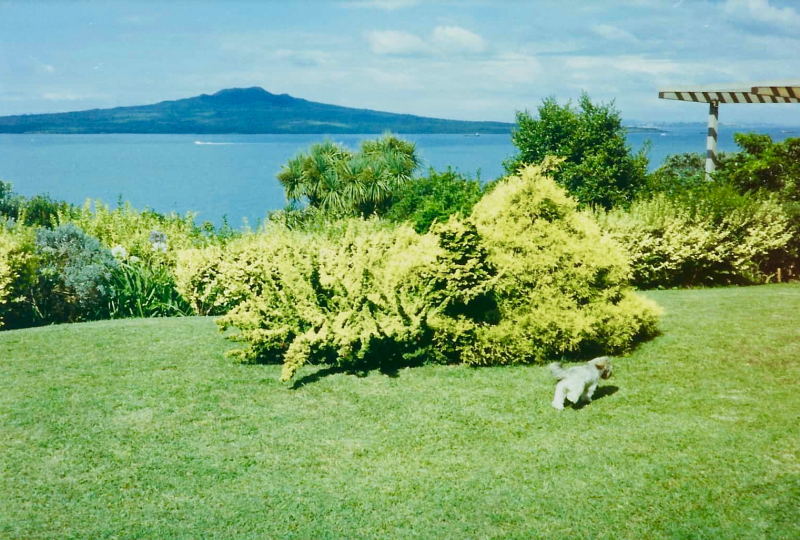 Not very good quality photo, I’m afraid – scanned and all. But you get the idea. The friendly little mutt belonged to the neighbour and was a bonus.

Between volcanic Rangitoto Island and our sitting room, the sail boats would pass. 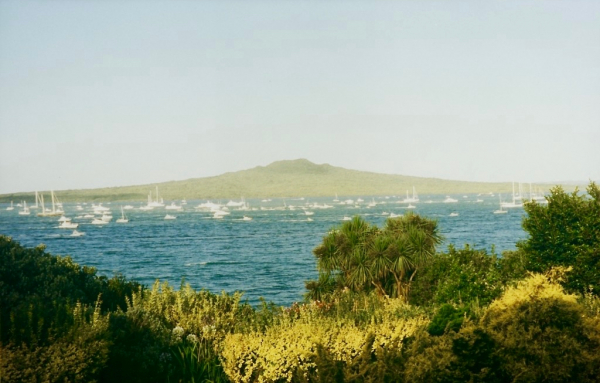 And the occasional cruise ship. 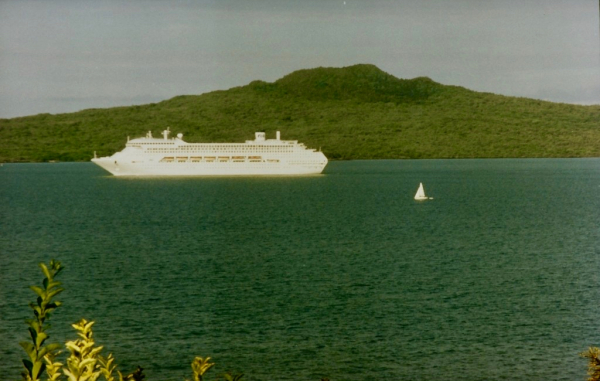 After the two months, we rented a little studio in a large, lovely garden for the rest of our stay. But that’s another story. If I’m ever to become a digital nomad, Devonport will be my first port of call.