World at a Glance: Humayun’s Tomb 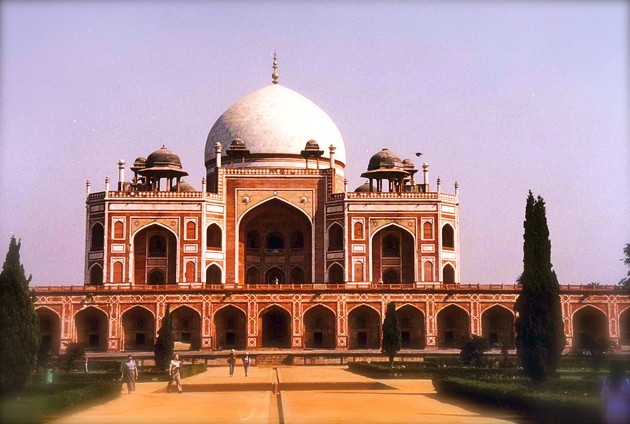 Like the Taj Mahal, Humayun’s tomb is a property worthy of special protection. And like the Taj Mahal, it’s a grave. And just as Emperor Shah Jahan built the Taj Mahal for his late, much-loved wife, this tomb was built by Humayun’s widow, Biga Begum, in memory of her late (and equally-loved, one must assume) husband. Taj Mahal may be far better-known, but Humayun’s Tomb came first. By about 100 years.

…stands as a landmark in the development of Mughal architecture, and also represents the earliest extant specimen of the Mughal scheme of the garden tomb, with causeways and channels. It is a well-developed specimen of the double-domed elevation with kiosks on a grand scale.

So who was this Humayun?

Nasir ud-din Muhammad Humayun was a Mughal emperor (the second after Bubur, direct descendant of Genghis Khan). And while he may have started out as a weakling ruler, losing territory hither and dither, he made up for it by gaining back all of it (and then some) in later years.

Though, later years… Humayun died at the fairly young age of 47, after getting his foot caught in his robes as he was walking down stone stairs with an armful of books, while at the same time kneeling down for the call to prayer. Of course, there are those who claim he was pushed. I suppose we’ll never know. (Meanwhile, note to self: walking while reading a book can be an equally fatal combination.)

I enjoyed wandering around this garden, admiring the architecture, listening to birds twittering… it’s a lovely, peaceful sanctuary in an otherwise bustling, slightly chaotic city. If you’re going to Agra and the Taj Mahal by way of Delhi, I recommend stopping by Humayun’s Tomb first.