Idle musings along the Nile

It’s 0930, we’ve come back from the crocodile temple, had breakfast and the girls are resting in the cabin. I am on the sun deck, watching life along the Nile, and scribbling notes as we drift slowly up river. 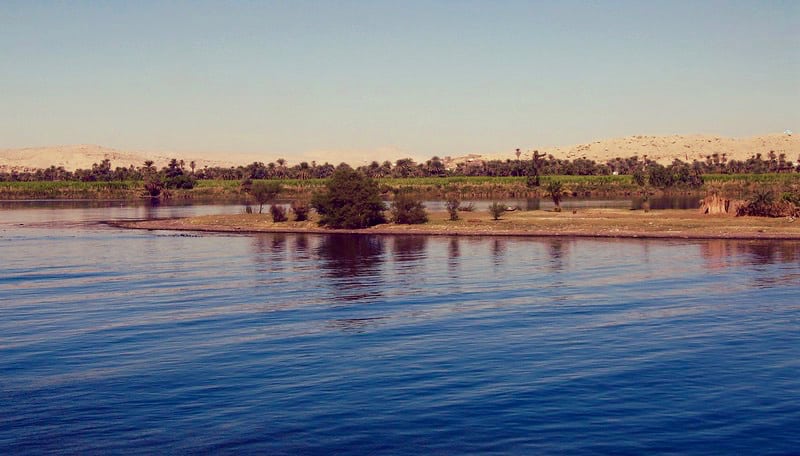 We’ll be in Aswan by lunchtime where there’s lots to see and do: the city, the unfinished obelisk (one of Hatshepsut’s, I shouldn’t be surprised), the Aswan dam, the Old Cataract Hotel of Agatha Christie fame, the botanic gardens on Lord Kitchener island, Nubian villages on Elephantine island and sailing feluccas. Looking forward to all of that.

Meanwhile, we’re gliding along the Nile. The banks are lined with palms, lotus and papyri. Desert hills loom behind. Here and there a stone fence, then a deserted building. Or perhaps not so deserted – no window panes, no roof, but clothes are hanging out to dry. Green and turquoise rowing boats tip at the river’s edge and a man trots quickly along on his donkey. Mysterious-looking veiled women walk along the bank. Cows graze and birds perch on the river. The river teems with life.

Yet this is such a tranquil scene. I can easily imagine Ramses II and Nefertari walking along here – with their entourage, no doubt. Or bold Hatshepsut as a young girl, playing boys’ games and hunting with friends; later walking with Senmut, her architect, friend and great love. Odd to think back then, this peaceful river swarmed with crocodiles and hippos.

The crocs have been moved to Lake Nasser. Some say they have made a comeback lately, behind the Aswan dam. Not tempted to go for a dip!

What about Nefertiti, that beautiful and mysterious Egyptian queen? She might have walked along here as well. Before she moved to Tell el Amarna with her husband, the heretic pharaoh Akhenaton who dared challenge the Egyptians’ belief in multiple gods and replace them all with just one – Aton, the sun.

Is it an improvement, replacing several gods with just one? It does have its disadvantages, as present-day monotheistic religions show. A one-god show has, at the very least, potential for intolerance, for dogmatism. Consider the still rather common attitude my god is the only god and everyone who believes differently is wrong and will never go to heaven.

Why not have several gods, really? Why not have one god for fertility, one for light, one for good weather, one for financial success, etc? Then you focus on the one closest to the issues at hand. It’s no less logical than believing in just one god. Why then, is one considered to be a faith, the other superstition? What, in fact, is the difference between faith and superstition? Just asking, you understand.

Now, Akhenaton was a very interesting man and high up on my list of people I’d like to meet. He believed in peace and love and equality for all. He also abhorred the powerful and manipulative priests in the temples. In that respect, choosing to worship only one god, a very egalitarian god, makes sense. The sun doesn’t discriminate. It shines on everyone, regardless of rank and class.

Challenging the establishment – in this case the priests in the temples – is never easy. Akhenaton was probably way way way ahead of his time. Doesn’t matter if your message is a sound one if the world’s not ready. Another famous man preached that same message of love, peace and equality about 1 000 years later. Of course, he had the advantage of Paul (and others) doing the follow-up marketing for him.

Life along the Nile… food for the imagination, and philosophical pondering.