I love waterfalls; it’s my favourite feature of nature.

I also love rainbows. We all do, don’t we? However, I feel I can make it a special claim, since my youngest daughter’s middle name is Hóng, meaning rainbow in the Hakka language. 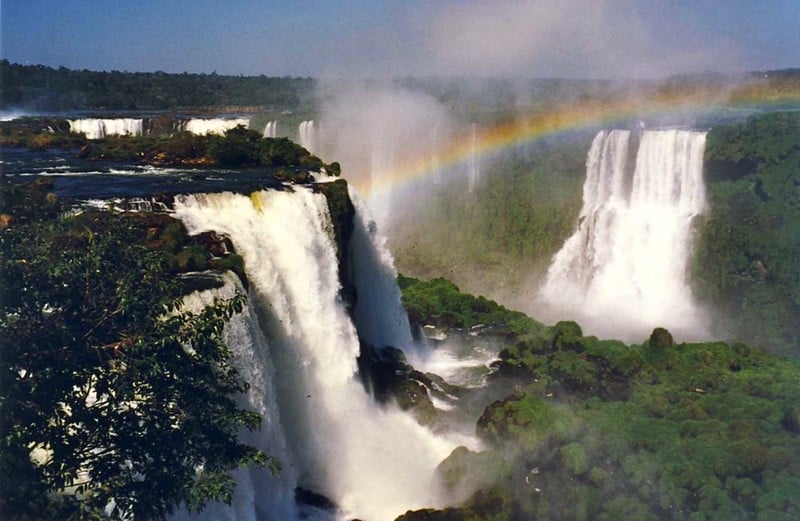 Paraguay is also part, or rather party, to the falls. Though it’s so small, one could argue it doesn’t really count. But I’m mentioning it anyway. Seems the fair thing to do.

Let’s quickly compare these three cross-border wonders of nature, starting with the quantitative:

THE WORLD'S LARGEST WATERFALLS
Niagara has a 51-metre drop, compared to 82 for Iguaçu and 108 for Victoria. Looking at height alone, neither Iguaçu or Victoria Falls can hold a candle to the world’s tallest waterfall, the Denmark Cataract!

‘Whaaat?’ I hear you say. ‘I thought you were going to say Angel Falls. I’ve never even heard of the Denmark Cataract. Why haven’t I?’

However, staying on dry land (though maybe not entirely dry), you are right. Venezuela’s Angel Falls is an impressive 979 metres tall. But much like Norway’s many waterfalls (9 of the world’s 20 highest are here in Norway), Angel Falls is rather narrow: 150 metres wide, compared to Victoria Falls’ 1,708 metres and Iguaçu Falls’ 2,700. Even little Niagara is 1,204 metres from one end to the other.

Jumping to the qualitative, i.e. my opinion, well, we might as well get it over with. Pretty as it is, Niagara feels a bit like the kitchen faucet compared to the other two. Victoria Falls is stunning, no doubt about it, so it’s a close call. But in my book, Iguaçu Falls is in a category all its own. And since this is my book, let’s talk about it. 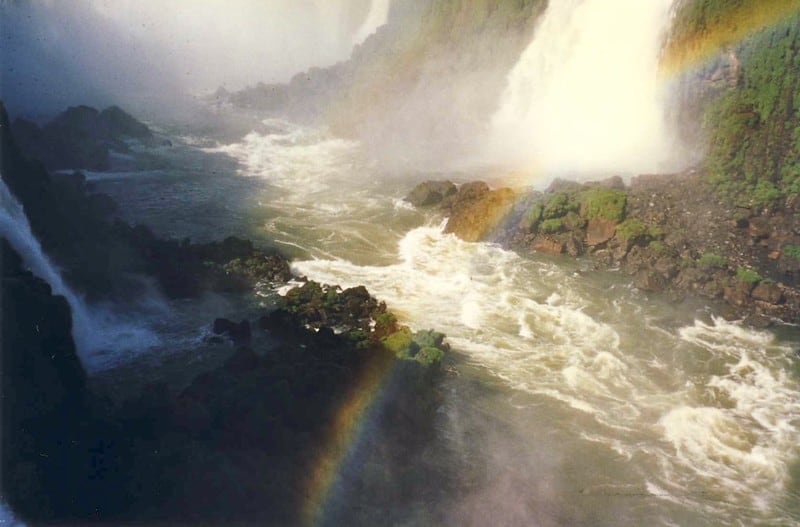 ‘Poor Niagara,’ Eleanor Roosevelt is rumoured to have said, when she first laid eyes on Iguazu Falls.

The falls can be found where the Iguazu River plunges over the edge of the world. That is surely how it must have felt to those who first encountered these mind-blowing cascades. In reality, the edge of the world is 2.7 km long and is called the Paraná Plateau, 23 km upriver from where the Iguazu and the Paraná rivers meet. About half the water falls into the abyss called the Devil’s Throat.

Hopping back in time, I’ve flown up from Buenos Aires to Cataratas Airport, and I’m staying near Triple Frontera. Watching the sun set simultaneously over three countries is also a bit mind-blowing, but that’s a story for another time.

I’m here to see water fall, thousands and thousands of cubic metres of it, so I’m on the first bus to Iguazú National Park where I hike through the forest. There’s enough space for me to dodge other visitors, but not the coatis. Very cute, but no manners. Bye-bye biscuit. The little rascals pinch it straight out of my hands. 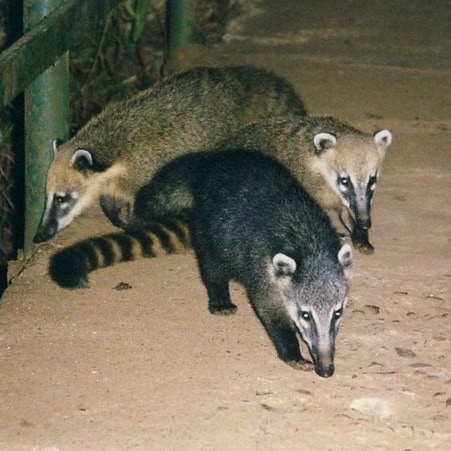 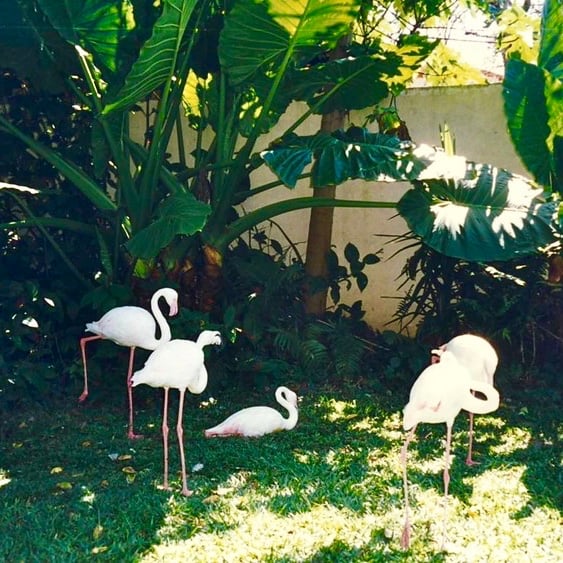 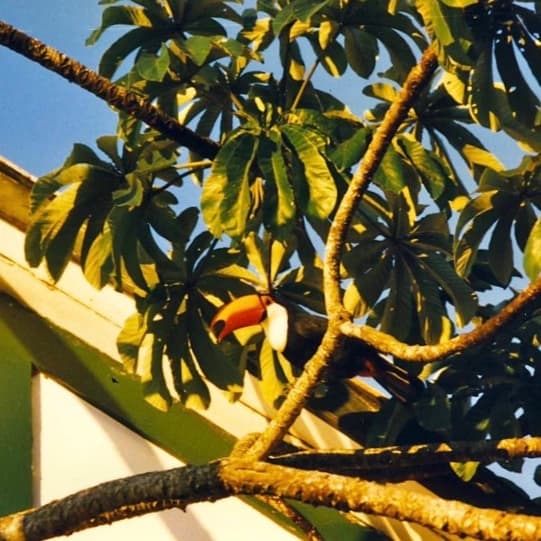 Iguazu wildlife: coatis, flamingoes and a toucan hiding among the leaves. Also butterflies flitter about, in every colour of the rainbow. Crocs are rumoured to hang about here, too, but I don’t see any.

White and blue waters whoosh over the edge. Mist and spray seem to leap the height of the tallest building in the world. Humanity (in this case, me) seems very fragile. 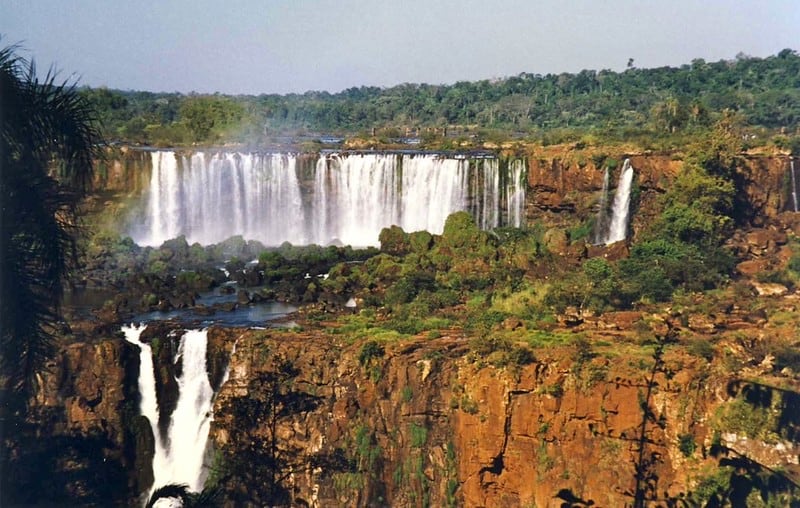 In front of Devil’s Throat, it feels as if I’m almost within touching distance of that magnificent show of energy, half above me, half crashing down in front of me and on both sides. It’s been years, but I clearly remember standing there for at least half an hour, staring – and wondering what they must have thought, those who first came upon it unawares.

This is like nothing I’ve ever seen before. A cliché it might be, but that doesn’t make it any less true: Iguaçu Falls takes my breath away. Figuratively and literally and in every which way. Nature’s artistry, elegance, force right here makes me giddy, in a most delicious way. I also remember thinking this would be the most perfect honeymoon place. I’ll blindfold him, and lead him to this exact spot. 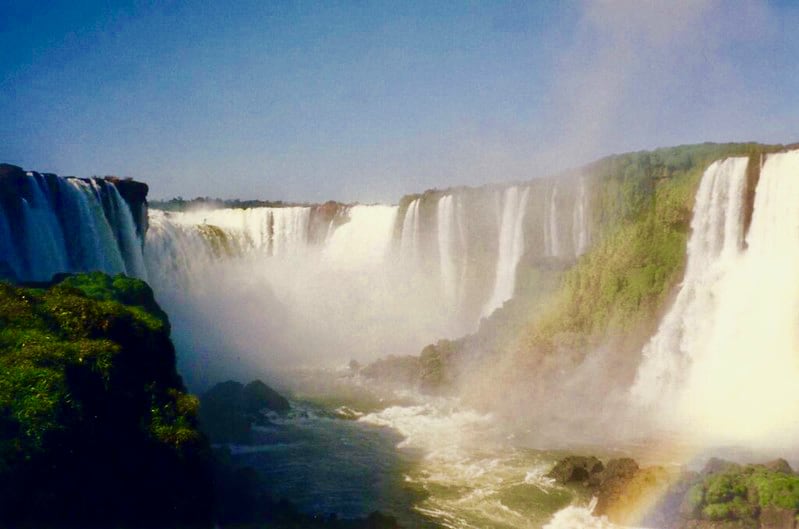